CRISPR used to store images and a movie inside living bacteria

Using CRISPR to store a movie in living bacteria

This is the very first video stored and retrieved from the DNA of living cells, thanks to CRISPR. http://bit.ly/2tNG3Bf

Forget iTunes or your old zipper case of DVDs. How about storing movies in a Petri dish of E. coli?

Researchers at Harvard Medical School and the Wyss Institute for Biologically Inspired Engineering have stored a short video in the DNA of bacteria and then retrieved it. It’s the first time a video has been recorded into living cells, and the development could have environmental applications.

“DNA is a great place to store information. Biology uses it quite effectively,” said Seth Shipman, a postdoctoral fellow at Harvard Medical School and first author of the study. “It’s compact, and it’s incredibly stable.”

Shipman and his colleagues encoded Eadweard Muybridge’s “Sallie Gardner at a Gallop,” otherwise known as “The Horse in Motion,” one of the earliest series of moving images ever created.

Their study was published in Nature on Wednesday.

To get the DNA stored into the bacterial genome, researchers used the CRISPR-Cas system, a powerful gene-editing tool. The researchers chopped up each frame into single-colored pixels. They then created DNA codes that corresponded to each color and strung several codes together. 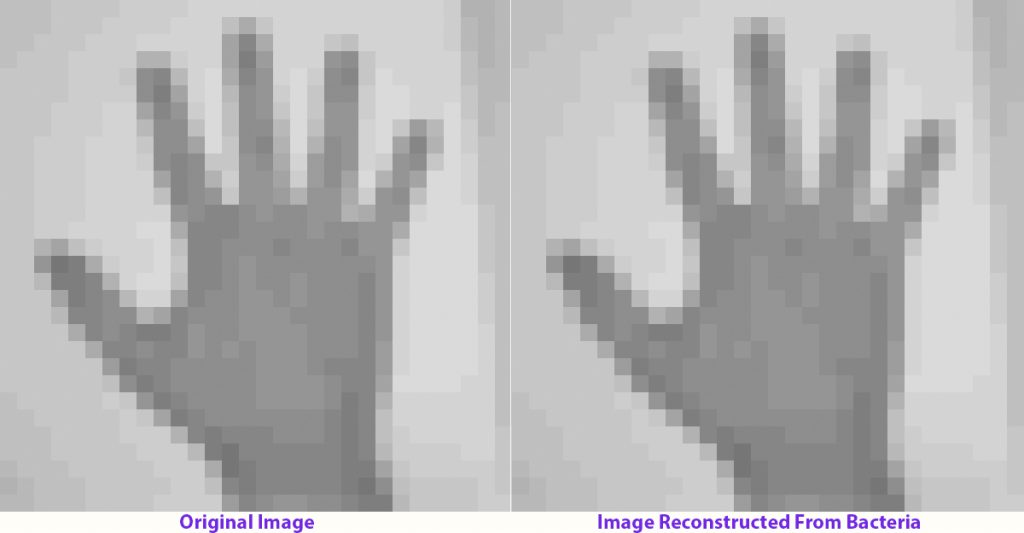 To the left is an image of a human hand, which was encoded into nucleotides and captured by the CRISPR-Cas adaptation system in living bacteria. To the right is the image after multiple generations of bacterial growth, recovered by sequencing bacterial genomes. Photo by Seth Shipman

Each bacterium took in snippets of the video and stored it in their DNA. Taken together, the researchers were able to put the pieces back and play the video.

With this work, Shipman said they eventually want to create “molecular recorders,” which are living cells that could sense things in the environment, like toxins or heavy metals, and record and store that information within their DNA.

This article is reproduced with permission from STAT. It was first published on July 12, 2017. Find the original story here.