An official from Starbucks reached out to disability rights activists on Saturday, the day before a planned protest against its recent ban on plastic straws, in what several disability rights groups said was the start of a direct conversation about the ban.

After Starbucks announced on July 9 it would phase out plastic straws from its stores by 2020, disability rights activists were concerned the policy would exclude some people with disabilities. Several New York City-based groups, including the Brooklyn Center for Independence of the Disabled and Disabled in Action, had planned to protest outside a Union Square Starbucks on Sunday after the annual Disability Pride Parade.

The activists had hoped the protest would help spread awareness about their concerns, but cancelled it after a phone call with Starbucks Global Director for Environment Rebecca Zimmer, who reached out to the Brooklyn Center for Independence of the Disabled to discuss the policy.

“It was clearly a response to our plans to protest,” said Joseph Rappaport, Executive Director at the Brooklyn Center for Independence of the Disabled (BCID).

Starbucks released a statement on Friday specifying that straws would be available for anyone who asks to use them. “Starbucks offers, and will continue to offer, straws to customers who need or request them in our stores,” the statement said.

Leaders from the BCID say they want Starbucks to make sure single-use plastic straws are available, no questions asked, to those who asks for them. On Saturday’s call, Zimmer said Starbucks would provide straws to anyone who asked, but didn’t confirm they would be plastic, according to Rappaport.

“To be clear, they haven’t met our demands, but we’re hoping they will after continuing the conversation,” Rappaport said.

Zimmer was not available for comment on Sunday. “We are pleased with the outcome and look forward to ongoing conversations on this topic,” Sanja Gould, a Starbucks spokesperson, told the NewsHour Weekend via email.

Starbucks’ announcement that they would phase all plastic straws out from their stores has gained praise from many environmentalists. But people with disabilities who rely on plastic straws to eat, drink and live their daily lives say banning straws would harm many in their community and that they were not included in the conversation.

“If you think about it, a straw, it seems so small and insignificant. But this seemingly insignificant thing just shows how little those policy makers and business owners pay attention to us, or want to get our feedback,” said Sharon Shapiro-Lacks, a BCID board member and executive director of Yad HaChazakah, a Jewish organization that advocates for people with disabilities.

“Eliminating plastic straws can cause many people with disabilities like myself not to be able to eat or drink in a restaurant, in a cafe … it’s more than just a convenience. It is a necessity for people like us,” she said.

READ NEXT: Growing advocacy and awareness bringing accessible design to more people than ever

Starbucks isn’t the only company taking steps to eliminate plastic straws. Plastic straw bans have become increasingly popular online, with celebrities throwing their weight behind the issue and social media users using the hashtags #stopsucking and #plasticfreeocean to show their support. Companies like McDonalds, American Airlines, Alaska Airlines, Ikea and Hyatt are working on phasing plastic straws out, too.

Seattle became the first major city to ban straws earlier this month, and others like New York City, San Francisco and Washington, D.C., are considering legislation to do the same. Scotland, Taiwan, Australia and Costa Rica have passed plastic straw legislation, too. Seattle’s law enables companies to keep plastic straws for people who require them.

A painful viral video from 2015, which shows a marine biologist removing a plastic straw wedged in a sea turtle’s nose, inspired an outpouring of support for plastic straw bans, according to environmentalists working to ban straws. That, plus growing public concern about the Great Pacific Garbage Patch and microplastics in oceans and seafood, had made banning straws seem like an easy win to many environmentalists and politicians, according to Rafael Espinal, who authored a bill that would ban plastic straws in New York City.

Starbucks has said they’re committed to finding plastic straw alternatives that work for everyone. But disability rights advocates say those may not exist yet. Plastic straws are flexible, durable, and can withstand hot temperatures in case the user needs it to drink hot coffee or soup, for example. As of now, advocates agree no straw alternatives seem to be able to do the same.

“Other types of straws simply do not offer the combination of strength, flexibility, and safety that plastic straws do,” said several groups, including Disability Rights Washington and the Seattle Commission for People with Disabilities, in an open letter to the Seattle City Council. 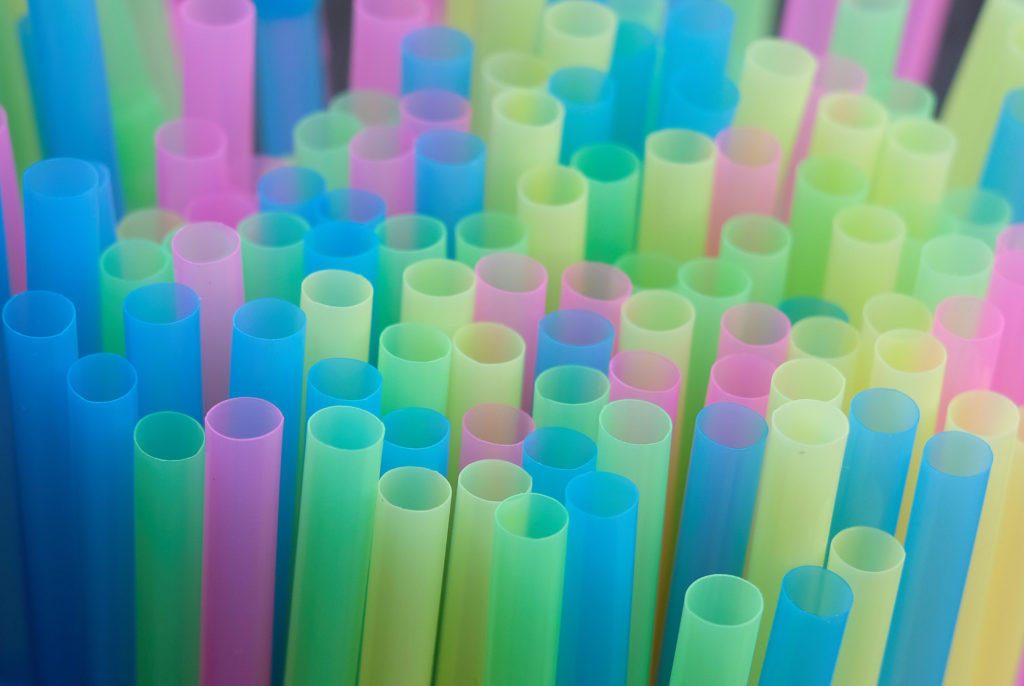 Drinking straws protrude from a glass in a illustration picture in Loughborough, Britain, on April 19, 2018. Photo by Darren Staples/Reuters

Paper straws get soggy and disintegrate, a potential choking hazard. Biodegradable straws can’t handle hot temperatures. Stainless steel straws aren’t flexible, and can be potentially dangerous, cutting the mouth and gums if used improperly. If you’re someone who has seizures, or poor motor function, or have difficulty controlling muscle groups, steel and glass straws may not be a safe option. And Starbucks’ new “adult sippy cups” may not work for people who can’t raise a cup to their mouth.

Shapiro-Lacks, who has cerebral palsy, recently testified at a New York City Council hearing about not being able to access a straw on an outing with her husband.

“My husband has had to hold the cup to my mouth in order for me to drink in a manner that draws public attention,” she said. “This compromises my privacy and dignity.”

Starbucks is important because it sets an example for other companies who plan to ban straws, Shapiro-Lacks said.

“If we do reach a good solution with Starbucks, that will be major. And they’re if they’re off track, it sets a very poor example,“ she said.

Editor’s note: This post has been updated to reflect that an open letter to the Seattle City Council was co-authored by several groups.

Left: A patron holds an iced beverage with a straw, at a Starbucks coffee store in Pasadena, California, on July 25, 2013. Photo by Mario Anzuoni/Reuters