A chemical used to produce baby bottles, cups and plastic packaging may cause male mice to act like females, a new study finds.

Published Monday in the Proceedings of the National Academy of Sciences, the study shows that male deer mice exposed to the organic compound Bisphenol A – or BPA – appeared more anxious and lost their ability to quickly navigate a maze. Both traits are highly uncommon for male deer mice but typical in females, the scientists say.

The male mice also appeared to lose their ability to attract females. At a rate of 2-to-1, test females rejected BPA-exposed males as potential breeding partners, leading the study’s authors to conclude that BPA exposure for males “could impact behavioral cues, pheromone signaling, or both.”

The study is just the latest strike against BPA, which many scientists call an endocrine-disrupting agent that mimics the body’s hormones and causes a slate of health defects in humans. Previous animal studies have found that BPA may accelerate puberty and could lead to cancer, heart disease and diabetes. 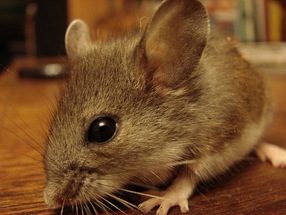 Even so, it continues to be widely used in the manufacturing of polycarbonate plastics – especially plastic bottles – as well as in the lining of canned food containers, dental sealants and some medical devices.

In 2008, the Food and Drug Administration said products in the American marketplace did not contain enough of the substance to be dangerous. But that same year, the Department of Health and Human Services’ National Toxicology Program issued a report expressing “some concern for neural and behavioral effects in fetuses, infants, and children at current human exposures.”

Just last week, the American Medical Association adopted a policy at its annual meeting officially “recognizing BPA as an endocrine-disrupting agent and urging that BPA-containing products with the potential for human exposure be clearly identified.” The organization also urged industry leaders to stop producing baby bottles and infant feeding cups with BPA.

Nine states – Connecticut, Maine, Maryland, Massachusetts, Minnesota, New York, Vermont, Washington, and Wisconsin – have BPA bans in place. Legislation is currently in the works to ban the chemical in baby food containers in California and Delaware.

Dr. Retha Newbold, a retired developmental biologist from the National Institute of Environmental Health Sciences, has studied BPA extensively and called the deer mice study “another marker of our sick environment.” But she stopped short of drawing any connections to humans.

“I think we have to be careful when we extrapolate any of these behavior studies in animals to humans,” she said. “But it gives us markers where we can start looking at some of these sexual behavior and cognitive learning processes in humans.”

We spoke with the lead author of the PNAS study, Dr. Cheryl Rosenfeld, associate professor of biomedical sciences at the University of Missouri.

What were you hoping to find in this latest BPA study?

Our guess was that if males are exposed to BPA in utero, when testosterone begins programming the brain, later behaviors would be affected. And we thought that the primary differences might be in sexually selective traits, or behaviors that are differently expressed between males and females. In many species, these are essential to produce offspring but they’re dependent on the development and physical condition of the animal as it’s in the womb and during the postnatal period. So we presumed these traits might be susceptible to BPA exposure.

Did your study mimic the way humans are exposed to BPA?

Yes, we only exposed the mice to BPA through the mother’s diet en utero and while they were nursing. That replicates what’s happening in the real world. Most health organizations agree that our primary exposure to BPA is through diet. A fetus has less ability to metabolize BPA, and it can get from the mother to fetus easily. When we measured the blood BPA concentrations in the females, we found the range of exposure is within the limits of what’s been detecting in humans.

And how does the maze relate to BPA exposure?

When these mice are sexually mature, their brains undergo significant remodeling that allows them to exhibit certain behaviors – like increased spatial-navigational skills in males. In humans, too, men tend to have a better ability than girls to locate in their environment – to know where they are in their environment, to remember where things are and where to find them. So when the males got to adulthood, we started them on behavioral testing in a maze that is well-recognized to test this ability. There are several holes and only one leads to the home cage. Non-BPA exposed males can almost immediately get to the correct hole. The BPA exposed male took quite a bit longer. They didn’t use the most efficient strategy and just wandered around randomly, aimlessly. When we tested the females, both the non-exposed and BPA-exposed females had similar responses. They were acting behaviorally like females.

Did they show any other signs that aren’t typical for males?

We wanted to test whether females could detect the compromised state of the males, so we set up a mate choice test. The way we assessed her interest is through preferential behavior – and in these mice that’s through nose-to-nose contact. We found that the females preferred the non-exposed males on a 2-to-1 basis.

Have you done any tests to find out if females exposed to BPA react differently?

We believe BPA exposure in females could affect their ability to nurse and care for their pups. But we need to do more research to find out if that’s the case.

What can people do to protect themselves from BPA at this point?

You can flip over plastic containers and if there’s a #7 on the bottom, it means it contains BPA. These products should be more clearly labeled. People should write to companies and ask them to take BPA out of their products, which some are already doing. Government regulation is going to take a long time to fully resolve this. So if people want to avoid BPA, they need to educate themselves.

Does your research synch with what’s already known about BPA?

I think it exposes why there’s been some conflicts in BPA studies. Clearly males and females do not react to this chemical in the same way. Many previous studies have been generic testing rather than being tailored to factors that are relevant to a particular species and behaviors that are consistent with whether they are male or female. If you test behaviors that are not important to that gender, you may or may not get an effect.

Are there plans to test this on humans?

It would be unethical to administer BPA to humans. So for the most part, we need to rely on correlative studies – maybe looking at behaviors like toy preferences. Does the boy go after male toys or after female toys?