CODOGNO, Italy (AP) — Italy scrambled Sunday to check the spread of the new viral disease amid rapidly rising numbers of infections in the country and a third death, calling off the Venice Carnival attended by thousands of revelers, scrapping major league soccer matches in the stricken area and shuttering theaters, including Milan’s legendary La Scala.

Also rising was concern in Europe, including by neighboring Austria, which dangled the specter of closing its border if the health emergency worsens.

The decision to call off Carnival was announced by Veneto regional Gov. Luca Zaia as the numbers of confirmed virus cases soared to 152, the largest number outside Asia.

“The ordinance is immediately operative and will go into effect at midnight,” said Zaia, whose area includes Venice, where thousands packed St. Mark’s Square. Carnival would have run through Tuesday.

Road blocks were set up in at least some of 10 towns in Lombardy at the epicenter of the outbreak, including in Casalpusterlengo, to keep people from leaving or arriving. Even trains transiting the area weren’t allowed to stop. 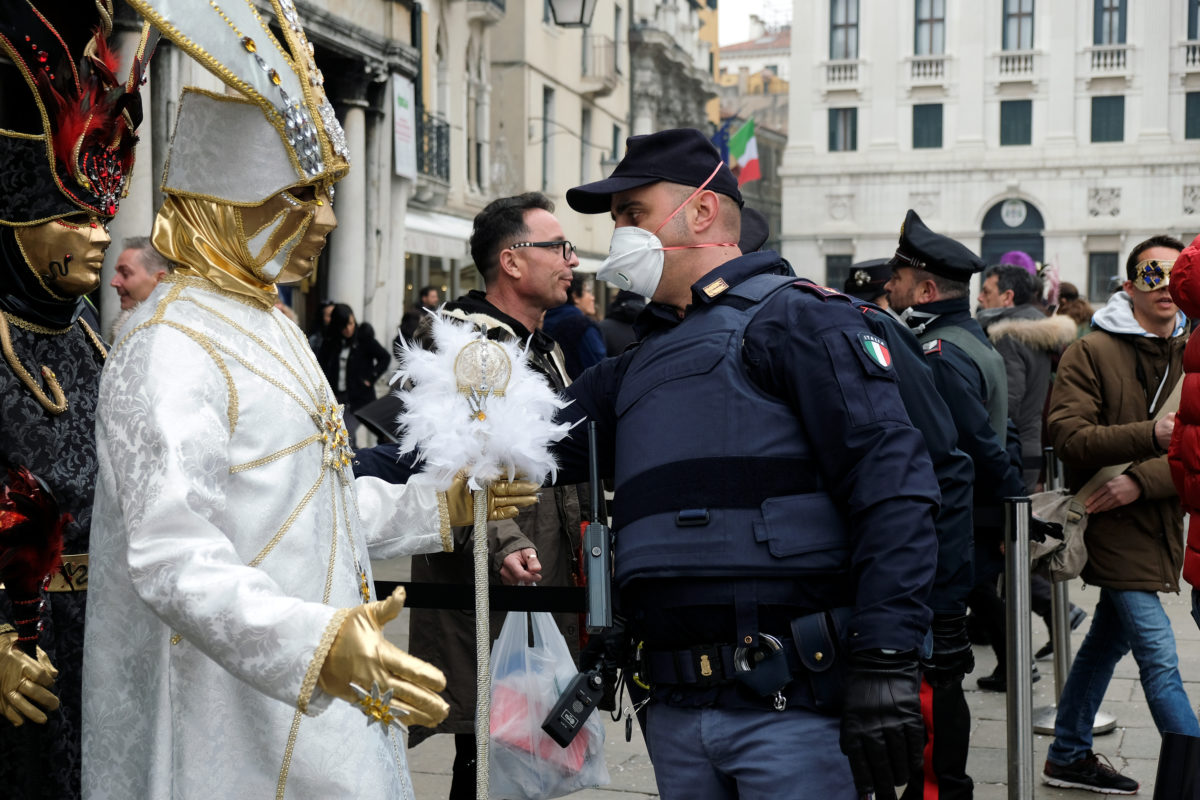 Police officer wearing a protective face mask stands next to carnival revellers at Venice Carnival, which the last two days of, as well as Sunday night’s festivities, have been cancelled because of an outbreak of coronavirus, in Venice, Italy February 23, 2020. Photo by Manuel Silvestri/Reuters.

Buses, trains and other forms of public transport — including boats in Venice — were being disinfected, Zaia told reporters. Museums were also ordered to shut down after Sunday in Venice, a top tourist draw anytime of the year, as well as in neighboring Lombardy, which, with at least 110 confirmed cases, is the epicenter of the viral outbreak.

Authorities said three people in Venice have tested positive for the viral disease known as COVID-19, all of them in their late 80s and who were hospitalized in critical condition.

Other northern regions with smaller numbers of cases are Emilia-Romagna and Piedmont.

Italy’s first two cases were a Chinese tourist couple, diagnosed earlier this month and reported recovering in a Rome hospital.

The death on Sunday of an elderly woman, who was already suffering from cancer when she contracted the virus, raised the nation’s death toll to three, said Lombardy regional official Giulio Gallera.

Authorities expressed frustration that they haven’t been able to track down the source of the virus that is spreading in the north and which surfaced last week when an Italian man in his late 30s in Codogno became critically ill.

At first, it was widely presumed that the man was infected by an Italian friend he dined with and who had recently returned from his job, based in Shanghai. But when the friend tested negative for the virus attention turned to several Chinese residents who frequent the same cafe visited by the stricken man. But Lombardy Gov. Attilio Fontana told reporters they all tested negative too. 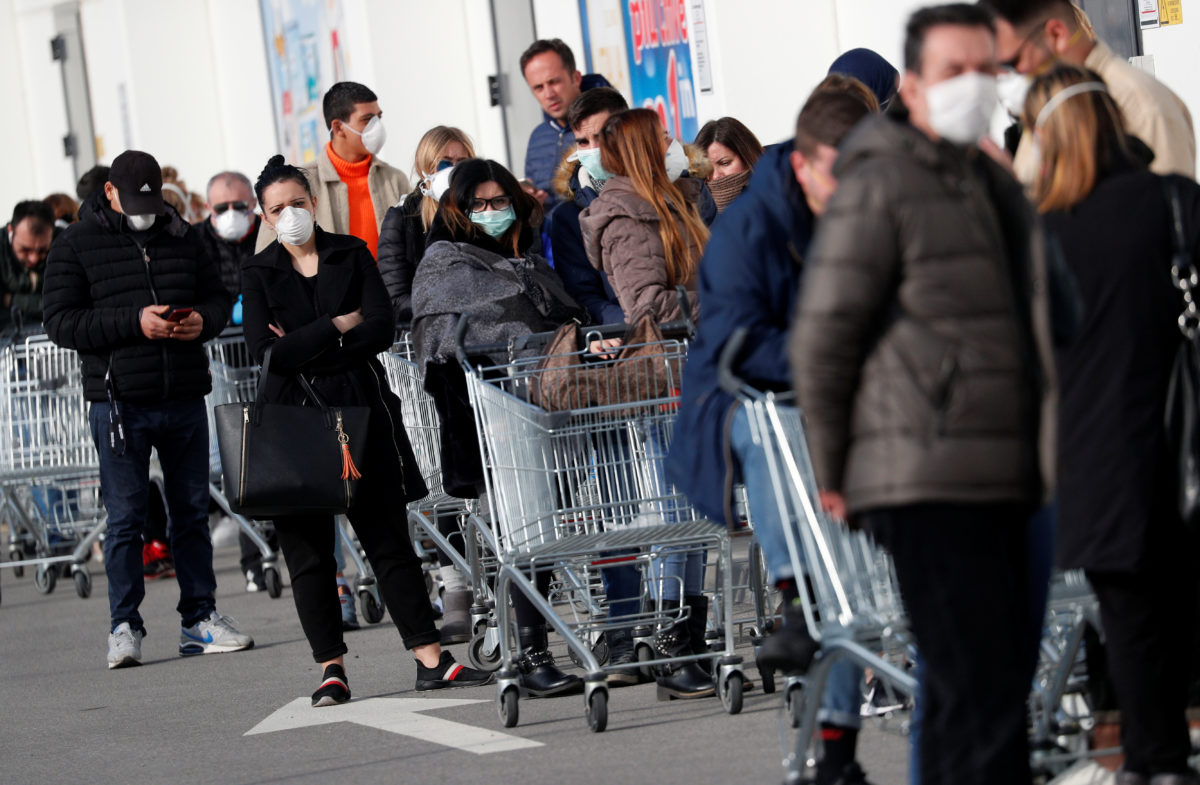 People queue at a supermarket outside the town of Casalpusterlengo, which has been closed by the Italian government due to a coronavirus outbreak in northern Italy, February 23, 2020. Photo by Guglielmo Mangiapane/Reuters.

So for now, Borrelli indicated the strategy is to concentrate on closures and other restrictions to try to stem the spread in the country, which already had taken measures early on in the global virus alarm that included banning direct flights from China, Hong Kong, Taiwan and Macau. Italy has also tested millions of airport passengers arriving from other places for any signs of fever.

Gallera told reporters in Milan that schools, museums, discos, pubs and theaters would stay closed for at least seven days. But restaurants in Milan and other Lombardy cities outside the main cluster area can still operate since, unlike at concerts and other entertainment venues, in eateries “people are not congregated in one place and there is space between tables,” Gallera said.

Lombardy’s ban on public events also extended to Masses in the predominantly Roman Catholic nation. Venice also was forbidding public Masses, while in Milan, the city’s iconic Gothic cathedral was closed to visitors. School trips inside Italy and overseas were banned.

But in the south, thousands turned out for a visit by Pope Francis in the port city of Bari. The pontiff shook hands with many of the faithful.

In Lombardy, a populous region which includes the country’s financial capital, Milan, nearly all the cases of COVID-19 were in the countryside, mainly in Codogno and nine neighboring towns. In those towns, only grocery stores and pharmacies were permitted to open, and people weren’t supposed to enter or leave the towns.

Melissa Catanacci, who lives on one of Codogno’s main roads, said in the morning, she ventured outside for a stroll along with her husband and two children, ages 10 and 13.

“Every quarter-hour or so a car goes by” on the main road, Catanacci said, speaking by telephone. With businesses closed, the usual Sunday “passeggiata” — a leisurely stroll through local streets — didn’t last very long, she said.

With school to stay shut through the week, her children were visiting their friends’ houses or inviting them over to hers to break the boredom, she said. 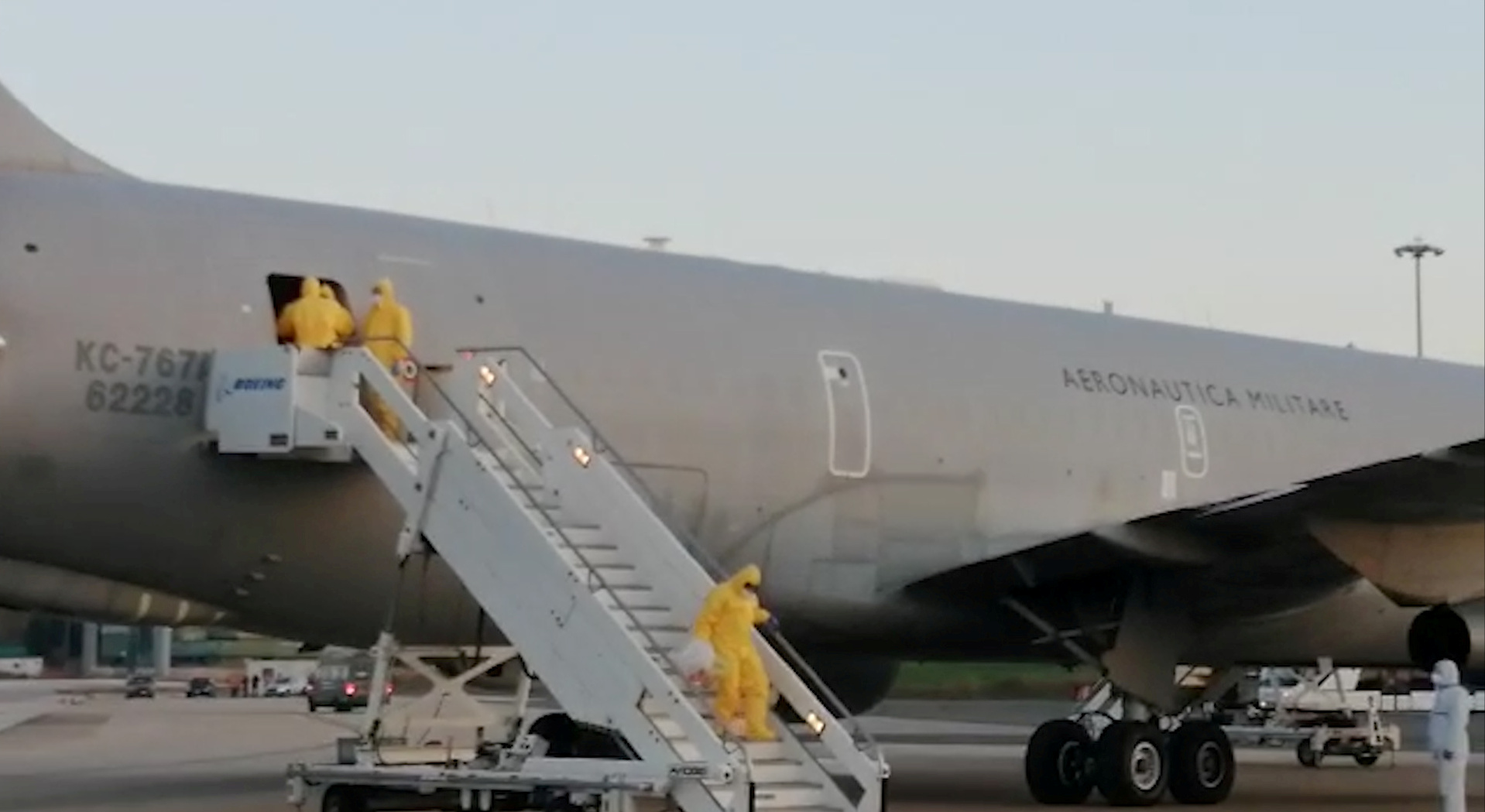 An Italian military plane carrying European passengers who were evacuated from the coronavirus-stricken Diamond Princess cruise ship in Japan, is seen on the runway after it landed at the Pratica di Mare military airport, in this still image taken from video, in Rome, Italy, February 22, 2020. Photo by Italian Ministry of Defence/Handout Reuters.

Sporting events were canceled, from children’s team practices to Serie A soccer matches which were to be played in northern stadiums. Those measures were ordered Saturday night by the Italian government.

Dispensers of hand disinfectant were being installed in trains run by the state railways, which also said it was supplying its crews with masks and disposable gloves.

Britain’s number of confirmed cases rose to 13, with the positive test results of four Britons who had been aboard the Diamond Princess cruise ship, which had been moored for days at a Japanese port when the ship was quarantined.

In Austria, security official Franz Lang said the country was consideringactivating border controls to Italy. Both nations are part of the European Union’s visa- and passport-free zone, but under certain circumstances individual countries can reactivate controls. Lang said the situation would be discussed in meetings Monday, local Austrian media reported.

In Switzerland, which like Austria borders Italy, there was a call for calm.

“The news from Italy is worrisome … but it is too early to think that a wave is rolling our way,” Daniel Koch, the head of the department for contagious diseases at the heath office, told the SRF public broadcaster

The German health ministry said it had initiated a phone conference for all European Union public health authorities about the outbreak in northern Italy on Monday.

French Health Minister Olivier Veran said that authorities were getting ready for a possible outbreak in France of the new virus. In an interview published Sunday in French newspaper Le Parisien he said he was monitoring closely the “very serious” situation, including in neighboring Italy.

Earlier this month, France reported the first death outside Asia of a person infected with the virus, an 80-year-old Chinese tourist.

Left: Tourists wear protective face masks at Venice Carnival, which the last two days of, as well as Sunday night's festivities, have been cancelled because of an outbreak of coronavirus, in Venice, Italy February 23, 2020. Photo by Manuel Silvestri/Reuters.