LAS VEGAS (AP) — Homeless people in Las Vegas have been directed to sleep in rectangles painted on the pavement in a makeshift parking lot camp as a way to limit the spread of the coronavirus, a move that is stirring outrage by some on social media.

Former Obama administration housing chief Julian Castro suggested in a post on Twitter that the city’s homeless should be temporarily placed in empty hotel rooms.

Added actress Alyssa Milano in a tweet: “In Las Vegas, homeless people are sleeping on concrete floor of a parking lot —six feet apart—while all the hotel rooms are empty.”

The white-lined patches of pavement were created by officials in the city known for its hospitality after a homeless shelter closed when a man staying there tested positive for the coronavirus.

READ MORE: How the outbreak’s economic disruption is impacting renters

City officials said they decided to temporarily place the homeless in a parking lot of a multi-use facility rather than inside buildings that include a stadium, a theater, exhibit space and meeting rooms, because officials planned to reserve them for potential hospital overflow space if needed.

City spokesman Jace Radke said Tuesday that the open-air shelter was an “emergency situation” and the lot was chosen because the city already owned the property.

“The marked squares are to help meet social distancing requirements. We’ll continue to provide this temporary respite, while practicing necessary social distancing, for anyone who is suffering from homelessness,” Radke said in an email.

The makeshift shelters come as officials in other states look to protect homeless people. In California, which has the nation’s largest homeless population, Gov. Gavin Newsom has pledged thousands of hotel rooms to help homeless people during the pandemic.

Officials in Nevada have not proposed putting the homeless in vacant hotels, including the famous casino resorts of the Las Vegas Strip, which began emptying two weeks ago when Gov. Steve Sisolak ordered a monthlong halt to gambling and closure of casinos. The resorts were allowed to keep their hotels open to avoid displacing guests or for emergency purposes. 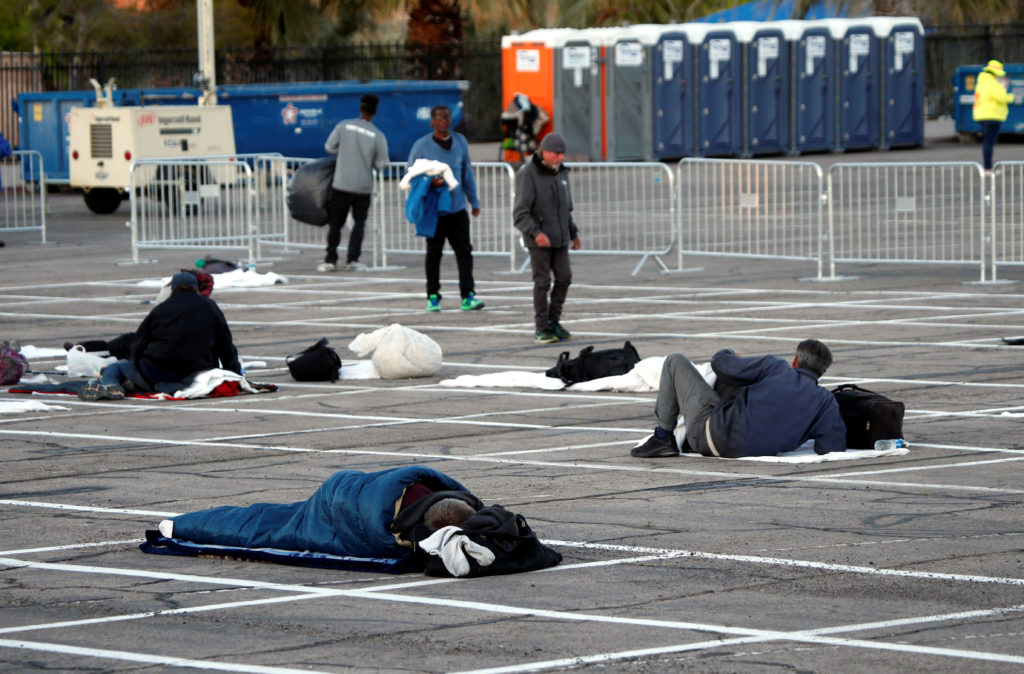 The governor’s office did not immediately respond to an emailed inquiry Tuesday asking if Sioslak was considering asking hotels to open their rooms to the homeless.

The Las Vegas Convention and Visitors Authority did not immediately respond to an inquiry about the current hotel room occupancy rates in Las Vegas.

The city of Las Vegas said in a tweet Monday night that it initially tried to provide padded carpeting for those staying in the open-air shelter, but said the carpeting couldn’t be sanitized and officials instead tried to offer mats for some.

There are about 5,500 homeless people and around Las Vegas, a metropolitan area that has an estimated population of about 2.3 million people.

Radke said 208 people slept at the parking lot shelter Monday night. Officials said they only expect to have it open until Friday.

Nevada health officials reported Tuesday that at least 26 people have died from the coronavirus. More than 1,000 people in the state have been diagnosed with the COVID-19 respiratory disease.

Most people with the virus experience mild or moderate fever and coughing that clear up in two to three weeks. Some, especially older adults and people with existing health problems, can face severe illness, including pneumonia and death.

At Greek refugee camp, there are few defenses against COVID-19 threat