NEW YORK — The hand sanitizers on Amazon were overpriced. A Walmart this weekend was completely sold out. Only on his third try was Ken Smith able to find the clear gel — at a Walgreens, where three bottles of Purell were left. He bought two.

Fear of the coronavirus has led people to stock up on the germ-killing gel, leaving store shelves empty and online retailers with sky-high prices set by those trying to profit on the rush. More is on the way, although it’s not clear how long it will take retailers to restock.

Sales of hand sanitizers in the U.S. were up 73% in the four weeks ending Feb. 22 compared to the same period a year ago, according to market research firm Nielsen.

The alcohol-based gunk is convenient, but hand sanitizer isn’t the best way to clean your hands. For that, soap and water still reigns supreme, according to the U.S. Centers for Disease Control and Prevention. The agency recommends first washing hands with warm or cold water and then lathering soap for 20 seconds to get it on the backs of hands, between fingers and under finger nails before rinsing off.

If you’re not near a sink, hand sanitizer will do. But keep in mind that it doesn’t kill all germs, the health agency says. Read the label and make sure you’re using one that has at least 60% alcohol. After applying it, rub it all over your hands until they’re dry. Another tip: don’t touch your face, since health officials say viruses could enter your body from your eyes, mouth or nose.

Hospitals are more concerned about a shortage of face masks, which people have also been snatching up despite pleas from health officials. Patient and treatment rooms in hospitals always have a sink and soap to wash hands, says Nancy Foster, the American Hospital Association’s head of quality and patient safety. But there are no good alternatives to masks for nurses and doctors.

Hand sanitizer isn’t the best way to clean your hands. For that, soap and water still reigns supreme.

Malls and sports arenas are adding more hand sanitizer stations. And some workplaces have said they are stocking up, too.

Purell, the best-selling hand sanitizer, is pumping up production. Walmart and other stores say they are talking to suppliers to stock up bare shelves, but didn’t say how long that could take. Kroger, which runs nearly 2,800 supermarkets across the country, is limiting the amount of hand sanitizer shoppers can buy to five.

Purell says it has seen higher demand from health care facilities in addition to stores. It is adding more shifts and having employees work overtime at the two Ohio facilities where most Purell is made, says Samantha Williams, a spokeswoman for its parent company Gojo Industries.

Others are trying to keep up, too. Coperalcool, a brand of hand sanitizer in Brazil, says it sold 1 million bottles last month, up from 200,000 in February 2019. The company that makes the brand says it is adding another shift at its factory in Piracicaba, Brazil. And it is considering exporting it for the first time after being approached by companies in China, South Korea and Thailand. 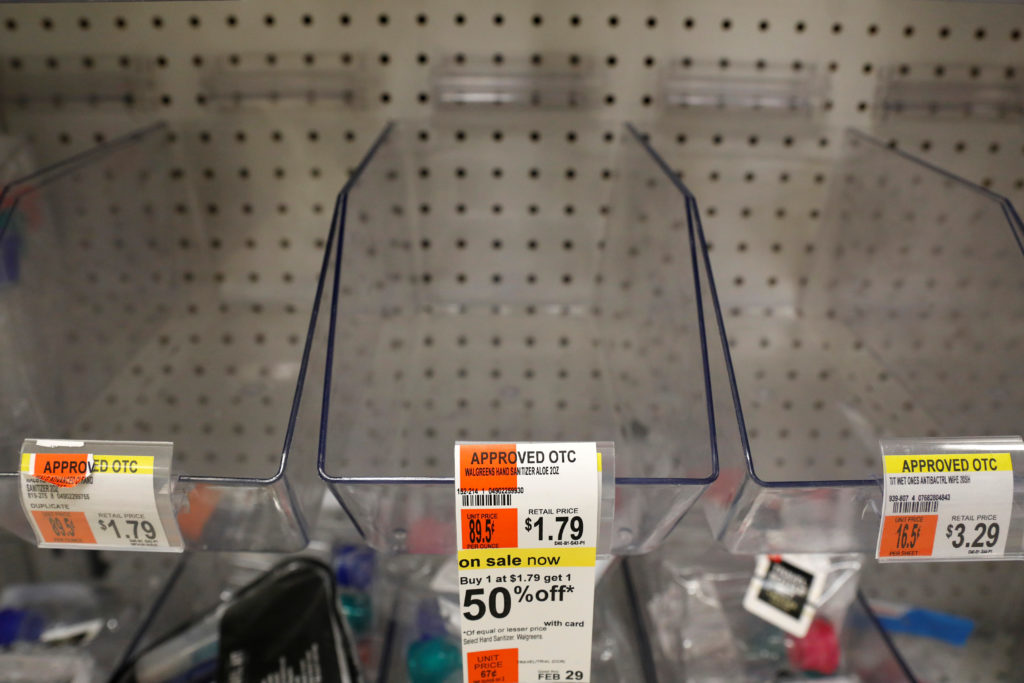 Walmart has seen higher demand for cleaning supplies and other items, similar to when shoppers start preparing for a hurricane. The world’s largest retailer says it is working with suppliers to stock up again on those items, including hand sanitizer.

At a Costco in Los Angeles Tuesday, hand sanitizer was gone and shoppers clogged the back of the cavernous store where workers were wheeling out pallet after pallet of bottled water. “Don’t believe the hype,” one worker shouted.

On Amazon, most hand sanitizers were gone. Ones that remained were seriously overpriced, even though the company has said it is policing its site for price gougers. Two 8-ounce bottles of Purell, for example, were being offered for $119 by a third-party seller; such vendors can list their items for sale on Amazon.com directly.

Gaelen Gates says she trekked to two Walgreens, a Safeway and a CVS this week and couldn’t find any hand sanitizer.

The attorney, who lives in San Francisco, is not worried about the new virus, she’s just trying to avoid getting a cold at a music and film festival she plans to attend later this month in Austin, Texas.

If she can’t find any by the time of her trip, she has a plan: wash her hands more frequently and “try not to touch anything.”

Left: Empty spaces are all that remain where hand sanitizer used to be on the shelves at Bi-Mart on Lancaster Drive in Salem, Oregon. Photo by Reuters