Measuring the weight of the world

The United States and Mexico are now effectively tied for a top spot nobody really wants — most obese in the developed world.

According to the Organisation for Economic Co-operation and Development (OECD), both populations are edging the 70 percent mark for citizens who are considered overweight or obese.* 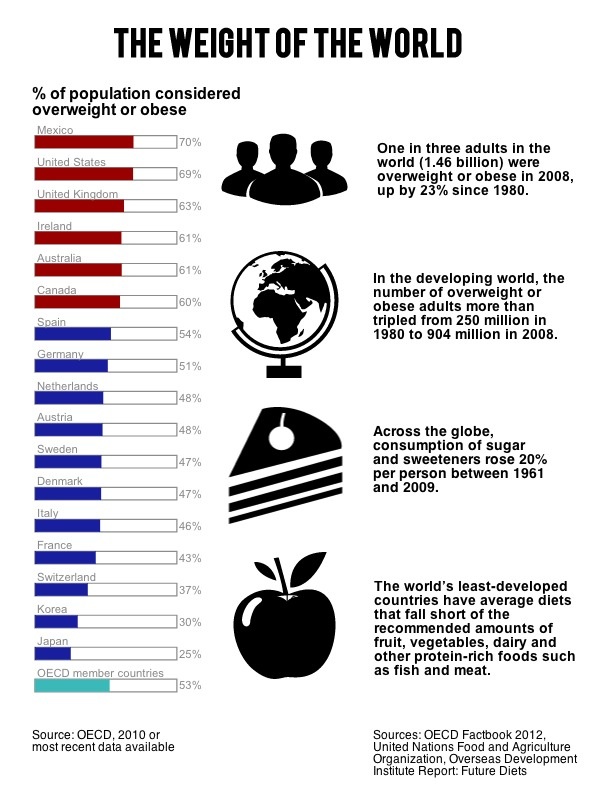 Sunday, NewsHour Weekend reports from Mexico on government efforts to combat obesity by encouraging exercise and taxing sugary drinks and high-calorie snack foods. These are strategies the whole world might soon need to embrace as obesity is fast becoming a global epidemic.

Weight in the developed world

According to the OECD, “mortality also increases progressively once the overweight threshold is crossed.”

The OECD’s most recent figures are stark:

Obesity rates vary widely in the OECD from lows of 4 percent in Japan and Korea to 32 percent in the United States and Mexico.

Weight in the developing world

As traditional diets change to include the sugary drinks and high-calorie snacks targeted in Mexico’s health program, the developing world is seeing greater numbers of overweight and obese individuals.

The study notes that despite this rapid increase in obesity in the developing world, some 842 million people go to bed hungry.

*According to the OECD the most frequently-used measures for overweight and obese and based on the body mass index (BMI), which evaluates an individual’s weight in relation to their height. Based on the WHO classification, adults with a BMI between 25 and 30 are defined as overweight, and those with a BMI over 30 as obese.

See what the Mexican government is doing to reduce obesity: