Most Americans think novel coronavirus poses a real threat to public health with worry more widespread among older Americans, according to the latest PBS NewsHour/NPR/Marist poll.

While 66 percent of Americans said they saw it as a real risk, responses varied significantly based on age. Among U.S. adults younger than age 45, that number dropped to 57 percent. Among those age 45 or older, the number rose to 72 percent. That difference may reflect what has been reported so far about the virus, which belongs to the same family of viruses as the common cold, SARS and MERS — that older age and underlying health conditions appear to contribute to a more serious prognosis. 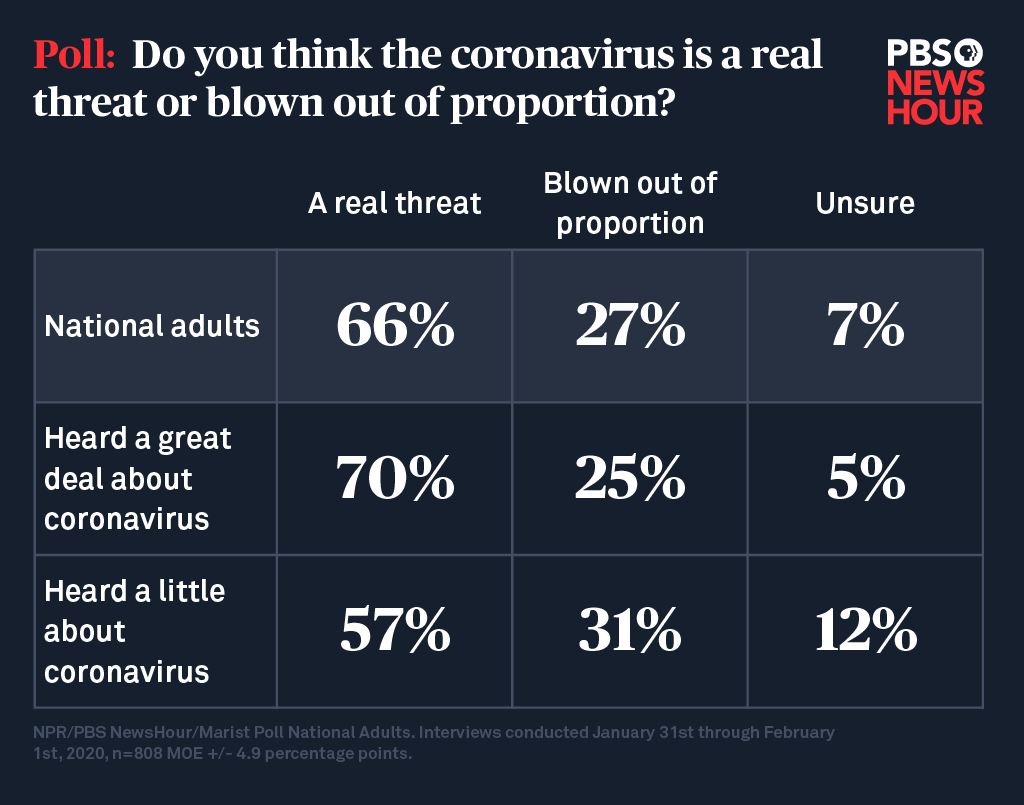 Globally, more than 17,300 people have become sick and 362 people have died so far, according to the World Health Organization. But most of the cases — and all of the deaths except for one — have been reported in China, where the virus originated and is considered an epidemic. Comparatively, over 150 people in 23 other countries, including the United States, have been diagnosed with the virus.

On Monday, the number of people in the U.S. with confirmed cases of novel coronavirus grew to 11, including two instances of person-to-person contact, according to the Centers for Disease Control and Prevention.

On Thursday, after much deliberation, the United Nations agency declared novel coronavirus a public health emergency of international concern, ramping up resources to combat the illness. And on Friday, Health and Human Services Secretary Alex Azar declared a public health emergency, rolling out a series of travel restrictions and quarantine orders to some people entering the U.S. from China. 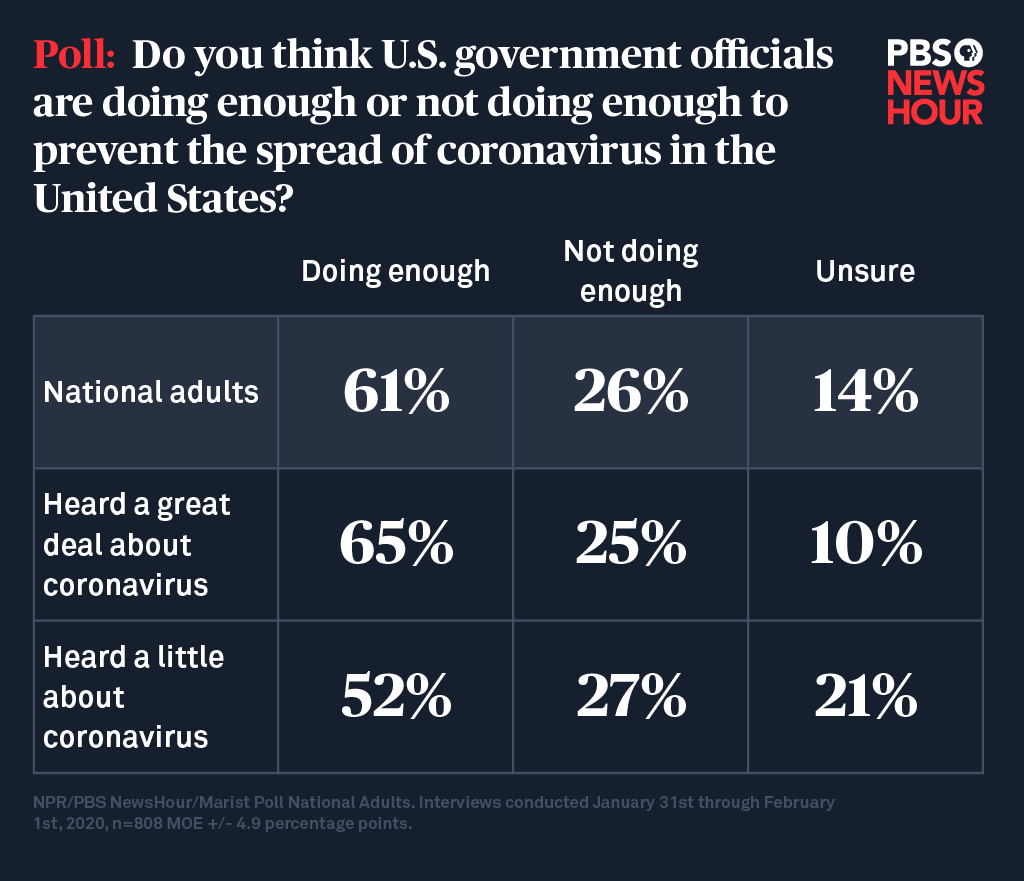 Americans need not panic, even though it is encouraging that so many Americans are aware of the virus, said William Schaffner, an infectious disease specialist at Vanderbilt Medical Center and medical director at the National Foundation of Infectious Diseases.

The CDC has repeatedly said the American public’s immediate risk from novel coronavirus is low. But since this news is developing rapidly, “people have a hard time putting little bits of information together and weaving their own story,” Schaffner said.

A more familiar virus — influenza — presents “a vastly larger threat to the health of the U.S. population,” he said. But the medical community is still trying to understand how novel coronavirus behaves, which summons a sense of powerlessness in people, prompting them to buy face masks and fret. (In fact, face masks are not effective protection against the virus, the CDC says. Instead, people are encouraged to wash their hands often with soap and warm water for at least 20 seconds, in addition to covering their mouth and nose when they cough or sneeze.)

The U.S cannot stop the spread of novel coronavirus because “the world is too small a place,” Schaffner said. Instead, “what we can do is curtail its spread very, very substantially so that we do not have a comparable outbreak in the U.S. as they’ve had in China,” he said.

To that end, U.S. public health officials have taken an “aggressive approach” to tamping down the virus. The nation has shored up resources to trace people who have made contact with confirmed cases of the virus, so that investigators can see if those individuals get sick, after how long and how intensely. U.S. citizens airlifted from Wuhan, China, last week were placed under 14-day federal quarantine on March Air Force Base in Southern California, where their temperatures have been checked regularly for fever, and their symptoms monitored to see if anyone develops the illness.

The first U.S. case of human-to-human transmission occurred in Illinois and was reported publicly on Jan. 30. There, a woman in her 60s returned from Wuhan, China, on Jan. 13 to a Chicago suburban community where she lived with her husband, who did not travel to China. She later felt ill, sought medical care and was diagnosed with novel coronavirus. Two weeks later, her husband realized he had developed similar symptoms and received the same diagnosis.

They both are being treated in isolation in Hoffman Estates, Illinois. That concerns John Hathway, 76, who resides nearby in Schaumburg, Illinois, at a senior living facility with roughly 600 residents.

“If a case shows up here, it’s going to spread like wildfire inside this facility,” Hathway said. He added that residents who collapse from a stroke or heart attack where he lives typically are transported to the same hospital where Illinois’ two novel coronavirus patients are being treated in isolation.

The virus’ emergence coincides with the rise of seasonal influenza, which the CDC says already has led to 10,000 deaths in the U.S. alone and 180,000 hospitalizations. Hathway said he thinks people who get coronavirus will write off their symptoms as the flu and continue to expose others at work and school. The U.S. has not “seen the end of it” yet, Hathway said.

Brandon Diaz, 20, said he disagrees, comparing news of novel coronavirus to fears in 2014 that Ebola might spread in the U.S.

“Everyone was freaking out about it, and nothing really happened in the U.S.,” said Diaz, a heating and cooling technician in Chicago.

Diaz, who is healing at home after a workplace accident a month ago, said he catches snippets of news about the new virus. He said he thinks the government is doing what they can: “As long as we take good precautions with people coming in, we’ll be fine.”