Archana Chatterjee left her loved ones behind in India nearly three decades ago to pursue her medical training in the United States.

She missed her parents’ final years and her mother’s funeral since she moved to care for communities far from her own. Today, Chatterjee is one of three pediatric infectious disease specialists in the state of South Dakota;the other two are from Colombia and Argentina.

Physicians from all parts of the world are serving the people of South Dakota, said Chatterjee, 58, the chair of the University of South Dakota’s Department of Pediatrics, and the state needs them.

That’s also true across the country. According to a new research letter published Tuesday in Journal of the American Medical Association, about one out of six medical professionals are foreign-born. And like Chatterjee, they often fill health care jobs in rural or underserved communities, places that have a harder time attracting U.S.-born medical school graduates. 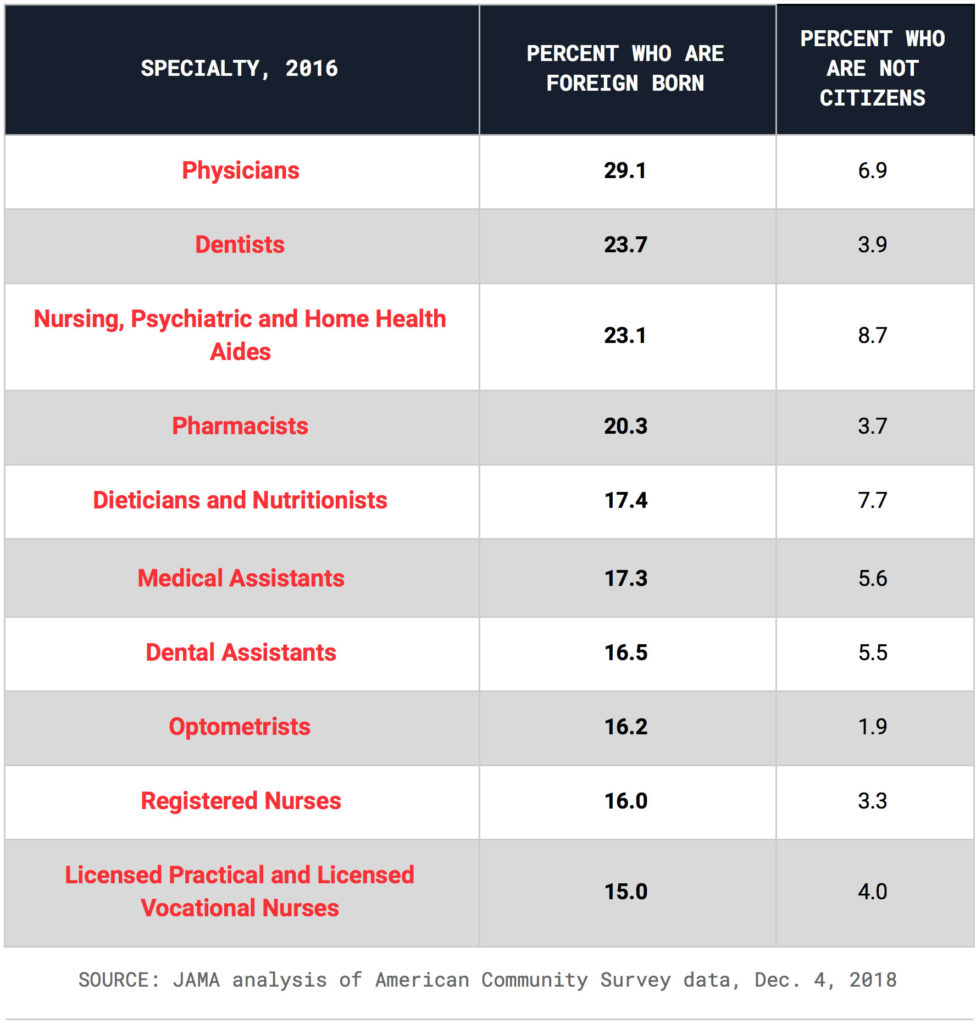 The authors of the research letter used self-reported data from the Census Bureau’s 2016 American Community Survey for their analysis. From a sample of more than 164,000 health care professionals, 16.6 percent were not born in the United States, and another 4.6 percent were not U.S. citizens.

In the U.S., an aging population and projected rise in chronic illnesses are expected to strain the health care system in the coming years, without a similar influx of trained workers to fill those jobs. Fueled by these needs, health care industry employment is expected to grow 18 percent, or by 2.4 million jobs, in the next eight years, according to the Bureau of Labor Statistics.

How the numbers break down

A closer look at the data, broken down into 25 different medical specialties, reveals clues about the extent to which the U.S. health care system already relies on immigrants to function.

Nearly a quarter of dentists, a fifth of pharmacists and almost a third of physicians were born abroad.

Nearly a quarter of dentists, a fifth of pharmacists and almost a third of physicians were born abroad. And 23 percent of nursing, psychiatric and home health aides are foreign-born, with one in 10 coming from the Caribbean and Central America. And the percent of foreign-born physicians in the U.S. has remained fairly steady for a decade, author Anupam Jena said.

Out of more than 150 million health care sector workers in 2015, immigrants made up nearly 26 million, or 17 percent, according to a 2017 Migration Policy Institute study. Of those specialties, 28 percent of physicians and surgeons were immigrants, and 24 percent were nursing, psychiatric and home health aides.

In a 2017 study exploring the role of immigrants in the U.S. health care system, Jena, a physician and professor at Harvard Medical School, and his colleagues gauged the scientific contributions of foreign medical graduates and found they produced 18 percent of all biomedical research and led 18.5 percent of clinical trials. An author of this latest letter, Jena said the research highlights the role immigrants play in U.S. health care.

“Demand for these services — they are going up, they’re not going down,” Jena said.

But broadly, U.S. policy under the Trump administration may be complicating efforts to fill demand with qualified candidates.

In January 2017, President Donald Trump signed an executive order that established a controversial travel ban against immigrants from predominantly Muslim nations — Iran, Iraq, Syria, Libya, Yemen, Somalia and Sudan. Though the initial ban was struck down, the revision upheld in June by the Supreme Court indefinitely bars people from a similar list of countries — Iran, Syria, Libya, Yemen, Somalia, North Korea and Venezuela — from attaining immigrant and nonimmigrant visas.

In response, the American Association of Medical Colleges, the American Medical Association and 32 other health organizations filed an amicus brief with the Supreme Court against the Trump administration’s travel ban and efforts to restrict immigration.

“Demand for these services — they are going up, they’re not going down.”

“The United States healthcare workforce relies upon health professionals and scientists from other countries to provide high-quality and accessible patient care,” the brief said. “Accordingly, a fair and efficient immigration system strengthens the American healthcare system and advances the nation’s health security.”

Since then, the White House has further tightened immigration into the country.

Trump signed an executive order that tightened rules for the H1B visa program that brings highly skilled workers into the United States, saying the restrictions would help prevent “fraud and abuse within the immigration system.” (The administration’s efforts to crack down on fraud have so far not turned up many violations, Bloomberg Law reported in November.)

And days ahead of the 2018 midterm elections, Trump threatened to unravel birthright citizenship for U.S.-born children of immigrants, a move he has not yet taken but would likely unleash a flurry of legal fights.

These stories come up in conversation when William Pinsky travels the world to talk to prospective medical school residents. As president of the Educational Commission for Foreign Medical Graduates, Pinsky works with the State Department and medical schools to ensure non-U.S. applicants for medical residency programs meet national standards.

U.S. immigration policy is giving a competitive edge to Canada, Australia and other nations to catch the eye of the world’s “best and brightest.”

He has had medical students otherwise interested in the United States hesitate to ask if they would still be able to travel to and from the country if they chose to study in the U.S. They fear missing births, deaths, weddings and other family milestones in their countries of origin because of uncertainty or confusion about how the United States’ new immigration policies could be interpreted by a federal official at the border or an airport. The current rules on visa protections should eliminate those fears, Pinsky said. But some people are still worried about rhetoric and how quickly policies have changed.

The United States remains the “gold standard” in medical training, but U.S. immigration policy is giving a competitive edge to Canada, Australia and other nations to catch the eye of the world’s “best and brightest,” according to Pinsky.

Back in Sioux Falls, South Dakota, Chatterjee said she is grateful for the opportunities she has received since she arrived in the United States, but she is troubled by anti-immigrant rhetoric she is hearing for the first time from the nation’s leaders.

That talk “is very distressing to people like me, who have given decades of our lives in service to the people of regions where we live,” she said.