What the data says about birthright citizenship

There are plenty of questions over whether and how President Donald Trump could end birthright citizenship in the U.S., as he suggested in an interview this week.

But what do we know about how many people have birthright citizenship in the U.S. and how that group has changed over time?

Here’s what the data says.

Who has birthright citizenship, and who would be affected by a change?

It is unclear who exactly would be affected if the White House were to upend the 14th Amendment. Trump has yet to articulate that, said Mark Hugo Lopez, director of global migration and demography at Pew Research Center.

Children born to mothers granted green cards of permanent residency, or those who have temporary work or student visas, for instance, could fall within the perimeters of the president’s action. So could children of undocumented immigrants, or those in mixed status households, Lopez said.

In 2016, there were four million U.S.-born children with at least one parent who is an unauthorized immigrant, according to a Migration Policy Institute analysis that pulled from the Census Bureau’s American Community Survey and Survey of Income and Program Participation. Of those:

The U.S. is among many countries with birthright citizenship

Trump also falsely claimed that the U.S. is “the only country in the world where a person comes in, has a baby and the baby is essentially a citizen of the United States for 85 years with all of those benefits.”

The number of children born to undocumented immigrants is declining

“It’s been declining almost a decade now,” he said, along with the overall U.S. birth rate. In 2017, 3.8 million babies were born in the U.S., the lowest recorded number of births in three decades and the largest single-year drop since 2010. 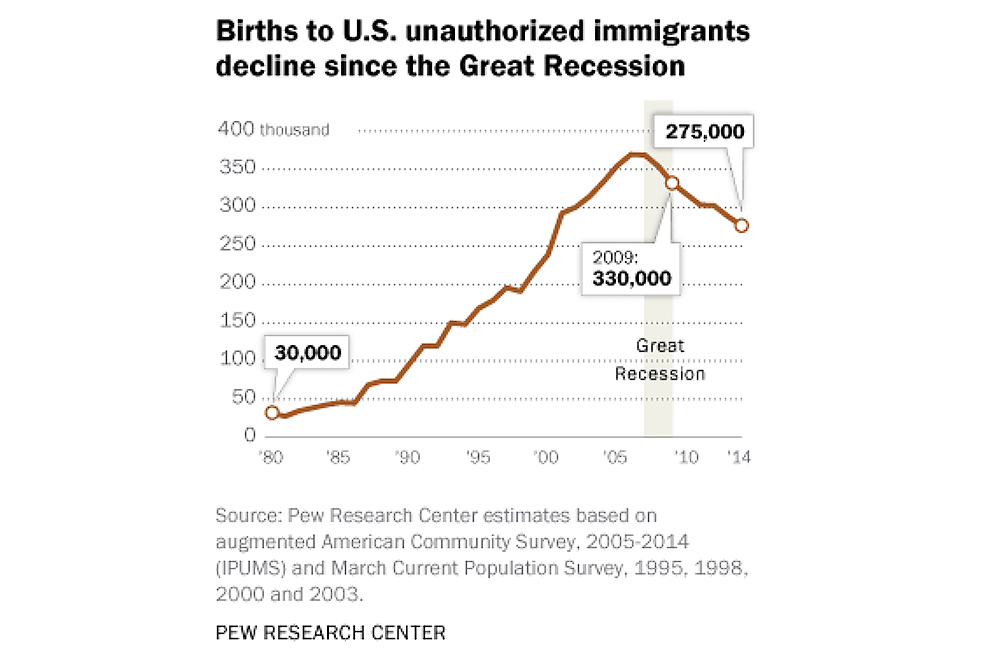 A more inclusive statistic from the Kids Count Data Center shows a similar trend. About 23 percent of children born in the U.S. in 2016 — more than 910,000 children — had mothers who were born in another country. Those mothers include undocumented and legal immigrants, as well as those who have become U.S. citizens. That number has dropped slightly from 25 percent — more than 1 million births to foreign-born mothers — in 2007.

What are the countries of origin for immigrant parents of U.S.-born children?

Mexico accounts for a third of all children born in the U.S. to foreign-born mothers.

Mexico accounts for about a third of all children born in the U.S. to foreign-born mothers. The other eight countries are China and India (5 percent each); El Salvador, Guatemala, and the Philippines (3 percent each); Honduras, Vietnam, the Dominican Republic and Puerto Rico (2 percent each).

While China and Russia have received significant attention for “birth tourism,” when women travel to the U.S. to give birth so their child will be a U.S. citizen, it’s a practice that is hard to quantify. The U.S. government does not track exactly how many women who come to the U.S. on tourist visas give birth while they are in the country.

“The numbers are really quite small. Birth tourism is a reality, but I’m not sure it’s a very big reality in the scheme of things,” said Michael Fix, a senior fellow at the Migration Policy Institute.

Left: A baby plays with a U.S. flag at a naturalization ceremony for new U.S. citizens at the WWII Memorial in Washington, D.C. President Donald Trump suggested this week that he might try to change U.S. law that gives automatic citizenship to children born on U.S. soil. Photo by Gary Cameron/Reuters