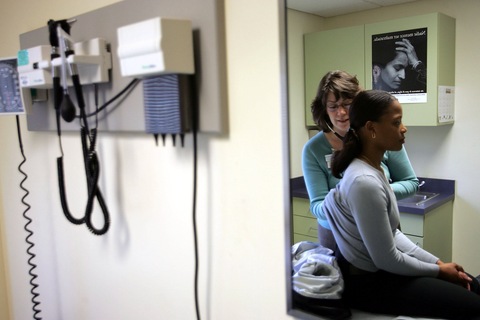 For the first time in four years, the number of Americans without health insurance dropped in 2011.

Why the coverage increase?

Democrats attribute the latter to the Affordable Care Act, which requires insurance companies to allow young adults to stay on their parents’ health plans through their 26th birthday. That provision of the law went into effect in September 2010.

In a conference call with reporters Wednesday, Census officials said the agency couldn’t determine how much of the coverage gains could be attributed specifically to the health care reform law. But they also noted that 40 percent of young adults in the 19-to-25 range who were newly covered in the past two years were insured through their parents’ plans.

The insurance update was released Wednesday in conjunction with a Census breakdown of poverty levels. (For more on those figures, read Paul Solman’s blog post on the NewsHour’s Making Sen$e page.)

Almost immediately after release, policy groups on both ends of the aisle seized the data to reinforce their positions on health reform.

Neera Tanden of the liberal think tank Center for American Progress said that the numbers prove that the Affordable Care Act is working and demonstrates “just how important it is to move forward with implementation of the rest of the law, especially Medicaid expansion which will cover millions of low-income Americans.”

Meanwhile, Alyene Senger of the conservative Heritage Foundation wrote in a blog post that a 2 percent drop in the number of young adults may be good, but “it is much less than President Obama and his Administration promised.” She added that a growing dependence on government programs like Medicaid is nothing short of “alarming.”

For a nonpartisan view of what the numbers mean, we turn to Sonya Streeter, senior policy analyst on Medicaid and the uninsured for the Kaiser Family Foundation.

What do the numbers released today tell us about the uninsured in the United States in 2011?

Streeter: In the last year there were 49 million people uninsured and this is about 1.3 million fewer uninsured since 2010. This is also the first decrease we’ve seen in the uninsured rate since the recession began in 2007. When we look at the non-elderly specifically, we see that just under 1 in 5 Americans were uninsured. I would say that it certainly is a positive thing that there are fewer people who are uninsured. But it’s difficult to read too much into them with implementation of the Affordable Care Act and some big changes coming in 2014. I think it’s a big question mark to know what will happen to uninsured rates in the next few years.

Who in the U.S. experienced the biggest shifts in insurance rates between 2010 and 2011?

Some analysts expected these numbers to go up slightly, given the economy. Are you surprised there was actually a slight drop in the overall numbers?

Streeter: I think that we all probably had our eyes toward the economy and were seeing the slow economic recovery and wondering what the impact of that and other factors would be. But there other surveys and data sets out there. Other surveys and data sets that came out earlier in the year suggested that maybe the uninsured rate would have dropped slightly, maybe stayed the same. I think that this wasn’t hugely surprising, but I don’t think many folks expected an enormous change.

How much can be read into the drop among the 19- to 25-year-old age group, in terms of the effect of health care reform?

Streeter: The provision that allows young adults to stay on their parents’ private health insurance went into effect in September of 2010. So this is the first year that we have 12 full months where we can see the impact of that provision. And it’s interesting to see that the uninsured rate dropped for that group compared to the previous year. Because it’s one of the provisions of the ACA that took effect before 2014, it’s something that we’ve been keeping our eye on to see the impact of that provision, and it would seem that we have seen an impact.

However, the other key provisions of the ACA that will affect the uninsured rate — in this case I’m thinking of when the health insurance exchanges come online and the Medicaid expansion — those provisions won’t take effect until 2014, and those are the provisions that are going to have what we expect to be a sizable impact on the uninsured rate.

How is the economy playing into this?

Streeter: The slow economic recovery means that the unemployment rate is still high, and has not dropped to the levels that we saw before the recession. Folks who are unemployed are going to have trouble accessing private coverage through their employer and they may be able to — if they have a job that doesn’t offer coverage or don’t have a job — they may be able to buy coverage in the non-group market or individual market. But they would be paying the entire cost of the premium and that would not be feasible for someone who has low income or who has been unemployed. So we’re seeing the economy is probably playing a role in the uninsured rate.

This is the first time in 10 years the rate of private insurance didn’t fall. To what do you attribute that?

Streeter: Some of the reason behind the non-significant change in the enrollment in employer-offered coverage is due to the young adults. More young adults are covered through their parents’ private health plan. And so to some degree, we see that. But also, we are not seeing beyond that a significant change in enrollment in employer-sponsored coverage. So as a result, that was unchanged this year compared with the previous years. Adult children being added to their parents’ health plans are counter-balancing, to some degree, some employers dropping coverage. But this population is not huge so this change in and of itself is not huge. So we’re not seeing the large drop in employer-sponsored coverage that we may have seen over the last decade.

More broadly, how does lack of insurance affect access to health care?

Streeter: When someone is without insurance coverage and they receive treatment, they are likely paying for the entire cost of payment out-of-pocket. And when faced with that, some of the uninsured will postpone care or forgo needed care or prescriptions. They may receive less preventive care, fewer recommended health care screenings. So folks who are uninsured may suffer serious medical consequences.

What are the financial implications of lack of coverage?

Some people say the Census may over-project the number of uninsured because some people with Medicaid answer that they are uninsured simply because they don’t have private insurance. How big of a concern has this been in years past and can we trust these numbers?

Streeter: It has been documented that there has been a Medicaid under-count in this survey when compared with administrative data. But this is the best source of data for researchers to examine all types of coverage and to look at the distribution of coverage types. It is also possible that individuals who are enrolled in Medicaid may report that they do not have health insurance in this survey but they may also report that they have private insurance. So they’re under-counted in many directions.

Tune in to the PBS NewsHour broadcast on Wednesday for more analysis of today’s Census numbers.