Mobile markets are often used in food deserts to supplant a lack of supermarkets in a particular area, most often in low-income neighborhoods. The U.S. Department of Agriculture defines food deserts as tracts of land where supermarkets are located more than a mile away from neighborhoods in dense urban areas and more than 10 miles away in rural ones.

In many food deserts, fast food outlets and small convenience stores with unhealthier choices often fill in the gaps, contributing to a scourge of health issues like obesity and diabetes, according to the USDA.

Federal data indicate an elevated percentage of food deserts are in higher-poverty regions and in minority communities. About 10 percent of the 65,000 census tracts outlined by the U.S. Census Bureau are food deserts. An estimated 23 million people living in food deserts have limited access to healthy food, and the majority of that population lives in urban areas, according to the USDA.

The NYU study, published on Thursday in the journal Preventing Chronic Disease, focused on the Bronx section of New York City, in part because of an obesity rate of 30 percent, which is among the highest in New York state, researchers said.

In 2008, New York City rolled out its Green Carts program, which utilized street vendors to increase the amount of fruits and vegetables available in certain sections of the city. More than 300 Green Carts now exist in New York, many in the Bronx and Manhattan. 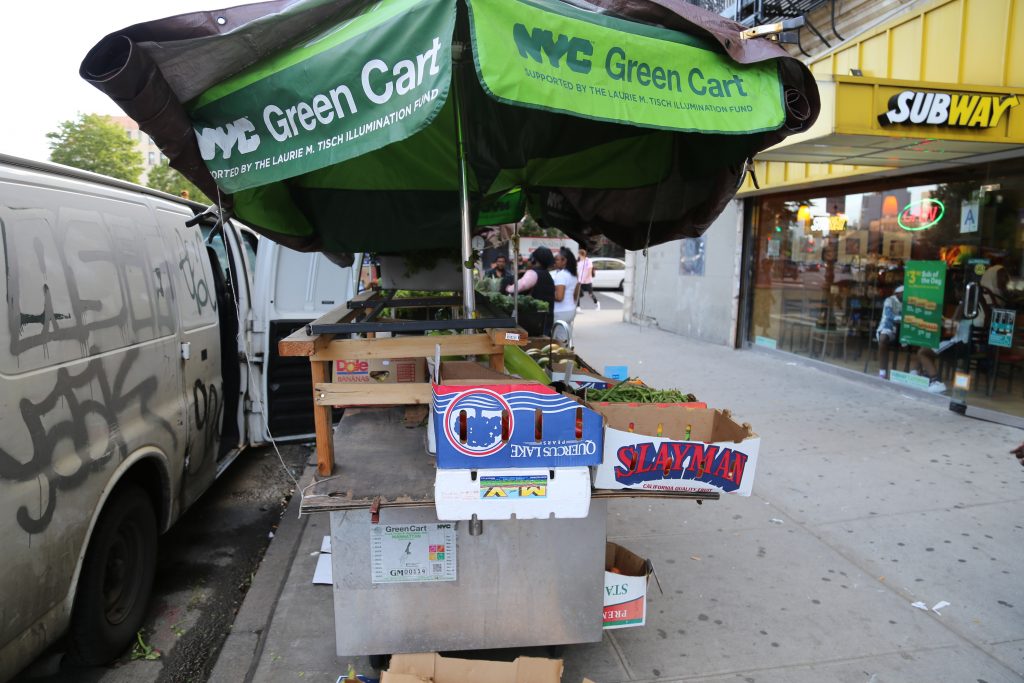 According to the city, food stamps, which are now known as the Supplemental Nutrition Assistance Program (SNAP), are provided to 1.8 million low-income residents of New York. One in five New Yorkers receive SNAP benefits including more than 650,000 children.

Dr. Brian Elbel, an associate professor of Population Health and Health Policy at the NYU School of Medicine and a senior investigator on the study, said his team of researchers looked at four mobile markets in the South Bronx between 2013 and 2014.

The group conducted “bag checks” to look at what customers bought and found that those who had used the Electronic Benefits Transfer (EBT) machines had about 5.4 more cups of fruits and vegetables than those who were paying with cash, indicating a correlation between the availability of machines and the purchases.

Among the nearly 800 people interviewed for the study, 42 percent said they received SNAP benefits. A previous study showed the average purchase of those items rose from nearly $4 to more than $8 with the use of electronic equipment accepting SNAP.

“Most of that is fruit but there were increases in both,” Elbel said.

While some evidence suggests adding supermarkets to food deserts may help bring more fresh produce to a particular community, they don’t always work because of high costs, minimal foot traffic or residents’ shopping and eating habits.

But increasingly mobile markets and fruit and vegetable stands are helping to decrease the disparity in healthy foods, and studies have shown they can increase the amount of fruits and vegetables a community located in a food desert consumes.

Ester Fuchs, a professor at Columbia University, helped produce a 2014 study looking at a fruit and vegetable vendors who took part in the Green Carts program.

Researchers who have studied the issue say adding a financial incentive and partnering with public and private entities can also help sustain these programs.

Elbel said one of the challenges of introducing EBT machines at mobile markets was the high cost of the equipment, with each machine costing about $900 to purchase and a $35 monthly fee. The research team also could not confirm whether those who purchased the produce actually ate it, or what their shopping habits may have been like the rest of the day, week or year.

Elbel said when the NYU study began in 2013, about 27 percent the 500 Green Cart locations in New York were equipped with EBT machines.

A spokesperson for the New York City Department of Health said in an email that as of July 2017, there were 315 Green Carts with active permits and 32 of those vendors were authorized by the USDA to accept EBT.

The city also offers other incentives to encourage SNAP users to purchase fresh produce, including $2 coupons for every $5 spent at farmers markets.

Charles Platkin, executive director of the Hunter College NYC Food Policy Center, said there are often more factors at play that affect the diets of residents living in low-income communities, like nutrition education and learning how to cook healthier food.

“If you build it it doesn’t mean it’s going to come,” he said. “Health care is talked about everyday in this country. How about we focus on some prevention.”

“Having something like this where Green Carts take SNAP is a no-brainer,” he said. “This study proves that.”

Elbel said while the outcomes of the NYU study were not set in stone, he hopes to take the research a step further, looking at eating habits at home and over a longer period of time.

“We didn’t follow these people and look at the total purchasing over the day or a week or a month,” he said. “Did they actually eat more of that stuff, did they throw it away? Those are all kind of next order questions that we would like to get to.”