Wally Pfingsten has always been a news junkie. But since President Donald Trump was elected, he’s been so anxious about the political tumult that even just having the TV news on in the background at home is unbearable.

“It’s been crippling,” said the 35-year-old San Mateo, Calif., resident and political moderate who has supported both Democratic and Republican candidates in the past. “I feel angry, really, really angry, far more angry than I expected to be.”

And it’s not Democrats: a quarter of Republicans report that the outcome of election is a significant source of stress for them.

He’s tried hard to quell his anxiety. First, he shut down his Facebook page to limit his exposure to the daily soaking of news from Washington. But not knowing the goings-on made him anxious, too. He found himself sneaking onto the Facebook account he made for his dog. “I felt like I was cheating,” he said.

Pfingsten is not alone in his politics-induced anxiety — it’s so common it’s been given an unofficial name: Post-Election Stress Disorder. Mental health professionals around the country, especially those working in Democratic strongholds, report a stream of patients coming in with anxiety and depression related to — or worsened by — the blast of daily news on the new administration.

In the past, therapists say it’s been fairly uncommon for patients to bring up politics on the couch. “It is big money to talk about politics with me ― that is not what we do!” said Maria Lymberis, a psychiatrist in Santa Monica, Calif.

But that was before “fake news,” “alternative facts,” “repeal and replace,” contested confirmations, travel bans, protests and suits over travel bans, suspicions about Russian influence and the departures of the acting attorney general and the new national security adviser. Among other things.

Requests for therapy appointments to Talkspace, an online therapy portal based in New York City, tripled immediately following the election and have remained high through January, according to the company. In particular, Talkspace has seen a steady increase in requests from minorities, including Muslim-Americans, African-Americans, Jews, gays and lesbians.

“In my 28 years in practice, I’ve never seen anything like this level of stress,” said Nancy Molitor, a psychologist in the Chicago suburbs. She says the vast majority of her patients — from millennials to those in their 80s — are bringing up politics in their therapy sessions. “What we’re seeing now after the inauguration is a huge uptick in anxiety.”

Many of her patients say they are having trouble sleeping and focusing at work or are fighting more with family members, she said. 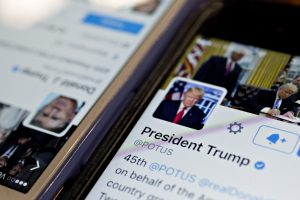 Mental health professionals around the country, especially in Democratic strongholds, report a stream of patients coming in with anxiety and depression. Photo by Andrew Harrer/Bloomberg via Getty Images

“I have people who’ve told me they’re in mourning, that they’ve lost their libido,” Molitor said. “I have people saying the anxiety is causing them to be so distracted that they’re blowing through stop signs or getting into fender benders.”

The anxiety appears to be widespread. Fifty-seven percent of Americans report that the current political climate is a very or somewhat significant source of stress, and 40 percent say the same about the outcome of the election, according to an online survey of 1,019 adults conducted by the American Psychological Association after the inauguration. Between August 2016 and January 2017, the overall average stress level increased significantly for the first time since the Stress in America survey began 10 years ago.

And it’s not Democrats: a quarter of Republicans report that the outcome of election is a significant source of stress for them.

“I’m seeing lot of anxiety and anger on both sides,” says Elaine DuCharme, a psychologist in Glastonbury, Conn. “People who are Republicans are afraid to tell anyone. They’re afraid that everybody thinks that every Republican thinks exactly as Trump does, and support every single thing he does.”

She says some of her patients are particularly concerned about maintaining civil relationships with friends and loved ones who have different political opinions. “People are walking on eggshells,” DuCharme said.

Karri King, 56, who lives in Buckeye, Ariz., and voted for Trump, says her experiences on social media have left her feeling sad and hopeless. “There’s so much negative from all these stupid Facebook posts acting like the world is going to end. And it’s false. And I can’t do a thing about it.”

King said she’s tried to engage civilly with people online who disagree with her, but “every time [Republicans] turn around, we’re bashed.”

When you say “a bunch of idiots” voted Trump in, “you’re talking about half of all Americans! We were hopeful at first, and now we’re angry and tired of being blamed,” said King. “Nobody wants to listen anymore, and that’s where my sadness comes from.”

Of course, in some parts of the country, especially those that are overwhelmingly Republican and outside big cities, people seem relieved if not uplifted by the new president’s flurry of executive orders and appointments.

Kristin Addison-Brown, a psychologist in rural Jonesboro, Ark., says before the election, some of her patients were voicing concerns about a possible Clinton victory. But since then, “it’s pretty much been crickets for my patients. They got their guy, so they’re not stressed anymore.”

Cottle, 64, has been struggling to understand the public outcry about Trump. “It’s like the sky is falling ― but a lot of that is just drama,” she said. “I feel encouraged, I feel hopeful. I can’t wait to wake up and see what the day’s going to bring and what else is going to happen.”

That same daily dose of news ― and the uncertainty of what will happen next ― rattles many Trump opponents. But, like Pfingsten, they can’t seem to quit their news consumption cold turkey.

“Part of the brain wants to know what’s going on, and you’re drawn to watching CNN or reading the news. And then the other part of you is saying no, no, this isn’t good for me!” says Molitor, the Chicago psychologist. “It’s unfortunately like driving by a car accident ― they know it’s not good for them [to gawk], but it’s hard to stop.”

Molitor recommends patients stay engaged but limit the time they spend on Facebook or watching the news. Focus instead on other things you enjoy, she advises ― calling a friend, taking a walk or reading a book.

“I never read the Harry Potter books, so I’m reading Harry Potter,” says Matthew Leal, a 34-year-old San Francisco resident who found himself sinking into a depression after the election. “Someone could see this and say I’m being totally escapist right now, but I feel like it’s kind of what I need.”

Left: Wally Pfingsten took a break from Facebook to relieve his anxiety, but he found himself sneaking onto an account he made for his dog, Derby. Photo by Jenny Gold/KHN