Why do suicidal patients wait hours for a hospital bed?

On an evening in Boston in 2013, Brie Bullinger Durant, scared that she would hurt herself, checked into an emergency room.

Durant, who grew up in the area, managed her depression and anxiety for years with therapy and medication. But on this night, she was having intense thoughts of suicide and turned to the ER for help.

A doctor asked her question after question, and she felt nervous over seeming numb and withdrawn. She kept thinking: please don’t send me home.

“I felt like I was going to answer the questions, and they would see me and see how composed I was, and think, ‘Oh, she’s okay, we’re going to send her home.’ That was probably my biggest fear,” she said.

“We closed thousands of beds and we didn’t cure mental health. The problem didn’t go away.” — David Mattodeo, Executive Director of the Massachusetts Association of Behavioral Health Systems

Health workers and lawmakers are working to accommodate patients like Durant as America endures a suicide surge, with suicide deaths rising from 29,000 people to 43,000 people between 1999 and 2014. Some have tried to increase the number of psychiatric beds available to suicidal patients, a disappearing resource in recent years that forces patients like Durant to wait longs hours for care. Meanwhile, others are assessing whether the hospital is even the right place to start considering treatment.

In recent decades, “We closed thousands of beds and we didn’t cure mental health,” David Mattodeo, Executive Director of the Massachusetts Association of Behavioral Health Systems, said. “The problem didn’t go away.”

Legislation aimed at making psychiatric beds more accessible have collected bipartisan support. The Helping Families in Mental Health Crisis Act, which was introduced by Rep. Tim Murphy (R-PA), passed the in the House in July with a nearly-unanimous vote of 422-2. It proposes each state create an online database of psychiatric beds with real-time information about what beds are available. Right now, not all state databases are updated constantly, which can hinder placement, Scott Dziengelski, legislative director for Murphy, said.

This bill would amend a long-standing exclusion that prohibited most people on Medicaid from receiving coverage for inpatient treatment. This could help expand the amount of people on Medicaid with access to psychiatric beds, Dziengelski said.

Another bill — the Mental Health Reform Act — also aims to expand Medicaid coverage for people staying in psychiatric facilities, co-sponsors Sen. Chris Murphy (D-CT) and Sen. Bill Cassidy (R-LA) wrote in The Hill. The bill has not yet received a vote in the Senate or the House. 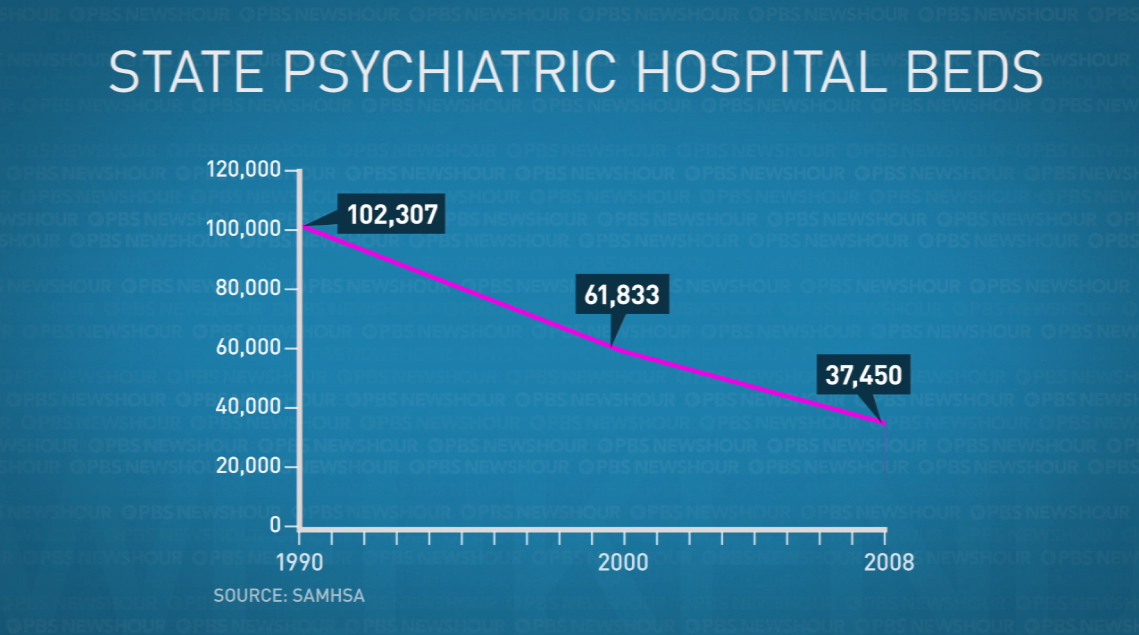 The number of psychiatric beds has decreased in recent years. Graphic by Lisa Overton

Where are all the psychiatric beds?

Despite her fear, hospital workers did not send Durant home, but they did say she had to wait for a vacant bed. The wait took overnight, which is not an uncommon situation. She continued her treatment after she left the hospital; today, she wants to help others by sharing her story.

But patients at imminent risk for suicide can find themselves waiting at the hospital for hours, or even days, for a psychiatric bed.

“The waiting time to get a bed for a psychiatric patient across the country is a lot longer than for any other medical condition,” Mark Covall, president and CEO of the National Association of Psychiatric Health Systems, said.

In the last 50 years, the number of psychiatric beds throughout the country has decreased, and funding for community initiatives and other non-hospital care for mental health patients has remained scarce.

Until recently, the bulk of mental health patients were treated in state hospitals. In 1955 there were 340 state psychiatric beds available among every 100,000 people, according to a report by the Treatment Advocacy Center. By 2005, this number had fallen to at most 17 beds per 100,000 — a 95 percent drop, according to the U.S. Department of Health and Human Services.

Many factors are responsible for the drop. During the 1950s, the development of antipsychotic drugs like chlorpromazine made for a quicker turnaround of patients from the hospital. At the same time, shocking conditions at state institutions — such as Philadelphia’s Bayberry hospital, where a former worker told NPR “rows of men were strapped and shackled to their bed frames” — were turning public opinion.

Politicians began shaping policy around these changing opinions by focusing on mental health services based inside the community instead of hospital accommodations. In 1963, President John F. Kennedy announced a major push to create more community services to hinder hospitalization.

During the 1960s, federal programs like Medicaid and Social Security began, allocating money to people with psychiatric disorders who were living in the community. But it meant people who still ended up in state hospitals would lose their access to federal funds when they arrived. This move left states with a cost-cutting option: discharge those patients to the community so they could receive federal aid. This policy “effectively shifted the cost of their care from the state to the federal government,” according to the Treatment Advocacy Center report.

“The state started to close down these beds, [but] the infrastructure that was really required to provide the necessary tier of services in the community never really materialized to the degree that it was envisioned,” Covall said. “You ended up with lots of people who were de-institutionalized, but didn’t really have the services that they needed.”

There is wide variation in the availability of psychiatric beds by state, according to data from 2007 provided by the Substance Abuse and Mental Health Services Administration.

According to that data, Mississippi has the highest number of beds for its residents, with 72 for every 100,000 people (not including the District of Columbia, where there are 173 beds per 100,000 adults). Nebraska has 54 beds per 100,000 people, Delaware has 49, Wyoming has approximately 49, and New York and South Dakota with approximately 40 also rank fairly high on that list. 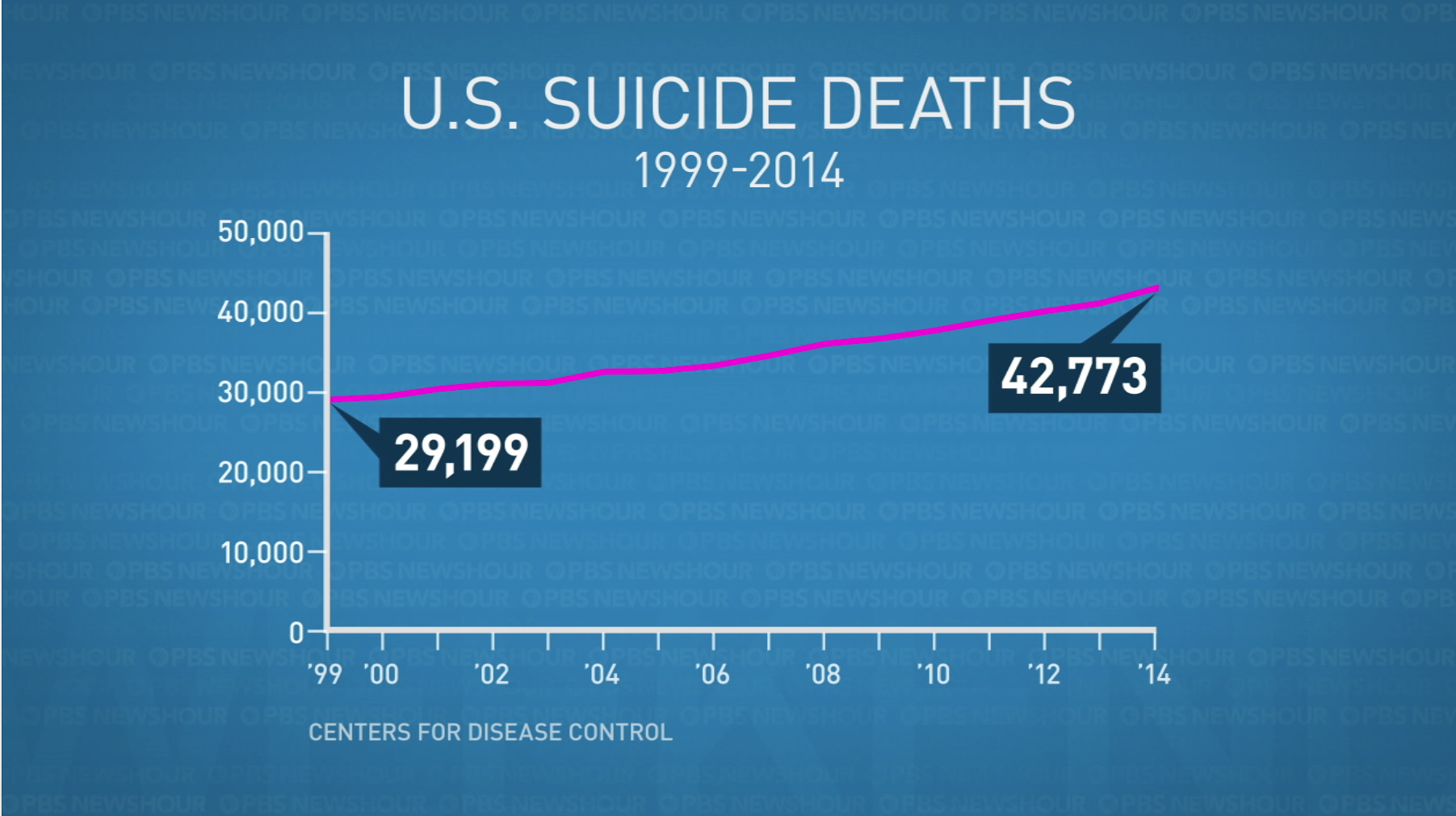 As suicides have increased in the U.S., the number of psychiatric beds available has decreased. Graphic by Lisa Overton

How serious is the lack of beds?

A 2009 study, co-authored by Jangho Yoon, Assistant Professor at the College of Public Health and Human Services at Oregon State University, and epidemiologist Tim A. Bruckner, Associate Professor of Public Health University of California-Irvine, found that a decrease in public psychiatric beds increased suicide rates. (That study looked at state-level data in the U.S. from 1982 to 1998.)

Mattodeo represents 44 hospitals in Massachusetts that provide mental health or substance abuse services. He said among those hospitals, average wait time for a bed, regardless of the reason, generally ranges from eight to 10 hours. In some cases, it can take days to find a placement, and some people — those who have stabilized at the emergency department — go home to wait.

This wait time can influence whether a patient receives treatment when they most acutely need it, according to Yoon and Bruckner’s study. A lack of available beds could also lead people to “self-medicate their symptoms,” the study said.

Without an adequate number of psychiatric beds, people in need are ending up on the street or in jail, Dziengelski said. “These individuals that used to be treated in psychiatric hospitals are winding up in county jails. They’re institutionalized,” he said.

Meanwhile, the demand for beds is increasing, Mattodeo said. He added that several factors are responsible, including the destigmatization of conversations around mental health in the last few years. Another, he said, is the expansion of insurance coverage under the Affordable Care Act to as many as 20 million additional people, according to one government estimate.

But others argue more beds might not stem the problem.

Despite action by lawmakers to make up for the disparity, psychiatric beds are supposed to be the last resort in a large-scale failure of comprehensive mental health services, Hogan said.

“There is absolutely no doubt that most people, including many smart people in the field, believe that there aren’t enough psychiatric hospital beds. And because they believe that, they jump to a belief that says that this must be one of the reasons that suicide is going up,” Hogan said.

Hogan helped develop the “Zero Suicide” approach to suicidal care, a model of comprehensive care for suicidal patients. The model calls for engaging the broader community of a patient — including researchers, lawmakers, family and clinicians — to treat suicidality.

“Very few places have comprehensive crisis systems. And because no one has seen one, they think it must be the hospital,” Hogan said.

Melanie Saltzman contributed reporting. If you or someone you know is thinking about suicide, call the National Suicide Prevention Lifeline at 1-800-273-8255.

Left: Psychiatric beds have been a disappearing resource for suicidal patients in recent years. Photo via Getty Images