The medical mystery that helped make Thomas Edison an inventor

Thomas Edison often claimed that Oct. 22, 1879 was the first successful test of his famous light bulb and, hence, the true anniversary of its creation. It was on this date that his incandescent light bulb glowed for 13.5 hours.

In fact, dozens of scientists had worked on electric light sources since at least 1802, when Sir Humphrey Davy created an early form of the electric arc lamp by connecting a battery to a strip of platinum that subsequently glowed, albeit neither very brightly nor for very long.

The world has never been quite as dark ever since.

What Edison did to best his competitors, and thus get credit for inventing the first economically practical light bulb, was to find an effective incandescent material (a carbonized filament); develop a far better vacuum in his bulbs; and create a high level of resistance (a measure of how a material reduces the electric current flow through it). He also figured out how to distribute electricity to people’s homes and buildings from a centralized source — his dynamo-powered electric stations — which was affordable to consumers and profitable for him.

Tinkering with his bulb, he applied on Nov. 4, 1879 for U.S. Patent # 223,898, for an electric lamp using “a carbon filament or strip coiled and connected to platinum contact wires.” (Approved by the U.S. Patent office on Jan. 27, 1880, this was, perhaps, the most famous of his 1,093 patents, along with those for the invention of the phonograph and a process for making motion pictures). Several months after the light bulb patent was filed, Edison developed a carbonized bamboo filament that allowed his bulbs to last more than 1,200 hours.

The world has never been quite as dark ever since.

One of the great medical mysteries surrounding Edison’s genius, however, was his profound deafness, which he considered to be a blessing because it allowed him to think and read with total concentration. As a boy, Edison once noted, “my refuge was the Detroit Public Library. I started, it now seems to me, with the first book on the bottom shelf and I went through the lot, one by one. I didn’t read a few books. I read the library.”

But what caused his deafness is still debated by doctors and hearing experts to this day. 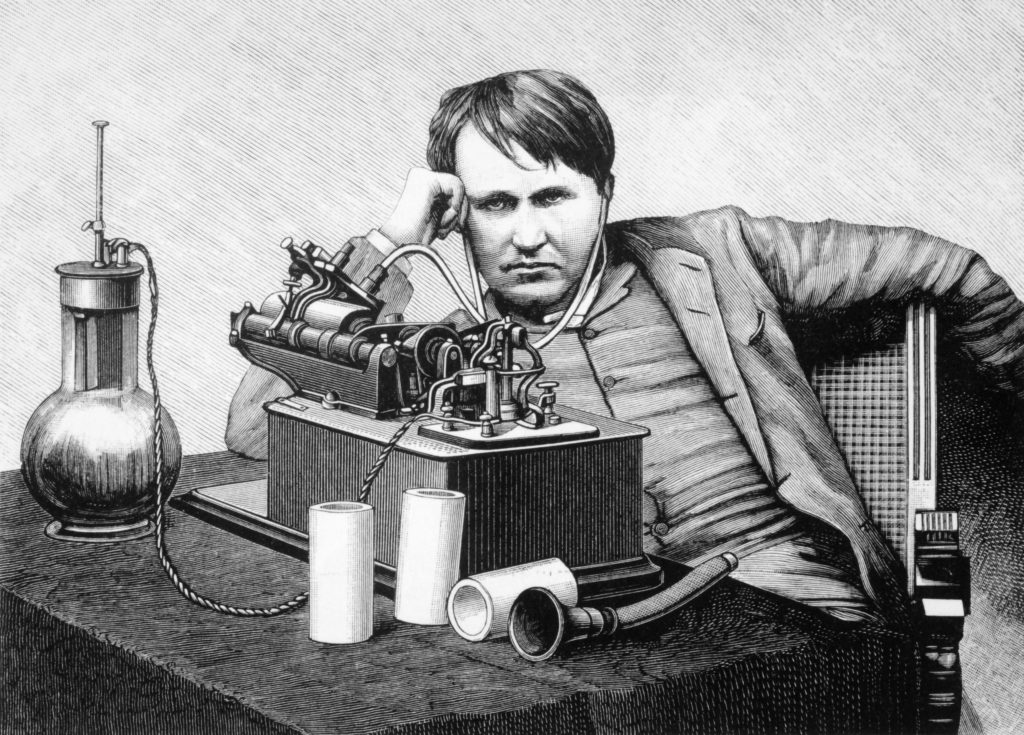 Thomas Edison listening to a recording on the phonograph that he invented, in Menlo Park, New Jersey, circa 1880. Photo by Popperfoto/Getty Images

The romantic version, one that Edison told many times during his long life, occurred at the age of 12. Although a long time resident of Menlo Park, New Jersey, he was born in Milan, Ohio and grew up in Port Huron, Michigan. As a young boy, he took a job as a “news butcher” on the Grand Trunk Railway run between Port Huron and Detroit. He rode the rails selling sandwiches, candy, peanuts and newspapers to the passengers. For young children reading about the great man, Thomas Edison’s account of the source of his hearing problems remains indelible:

I was trying to climb into the freight car with both arms full of heavy bundles of papers. I ran after it and caught the rear step, hardly able to lift myself. A trainman reached over and grabbed me by the ears and lifted me…I felt something snap inside my head and the deafness started from that time and has progressed ever since….Earache came first, then a little deafness, and this deafness increased until at the theatre I could hear only a few words now and then.

In another version, he told of being hit on the ears by a train conductor when his makeshift chemical laboratory in one of the boxcars caught fire. The pugilistic conductor then threw the young Edison off the speeding train, along with his chemicals and apparatus. 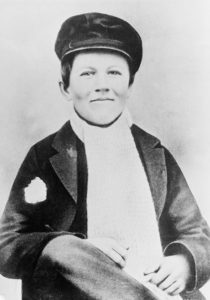 At 12, Edison was a newsboy and a candy butcher on the Grand Trunk Railroad. He maintained a chemical laboratory in the train’s baggage car, which also housed a printing press on which the young Edison ran off editions of The Weekly Herald. Undated photograph, circa 1860.

Years later, he told close friends that neither event actually occurred, but he held to the basic premise that his hearing loss began at age 12. If, indeed, these traumatic injuries had occured, Edison may have developed a disruption of the delicate bones in the ear that might explain his deafness.

One of Edison’s biographers, Paul Israel, who is also the director and general editor of the Thomas A. Edison Papers at Rutgers University, has suggested that Thomas suffered from numerous ear infections as a child (and, perhaps, a serious bout of scarlet fever) that may have caused or, at least, contributed to his deafness. A few ear surgeons have retrospectively diagnosed otosclerosis (abnormal growth and remodeling of the tiny bones in the middle ear) or cholesteoma (a destructive skin growth in the middle ear) as the cause of his bilateral conductive hearing loss.

While middle ear infections (or otitis media) remain a common bane of childhood, what has chanegd since Edison’s era is that infections caused by bacteria can often be easily treated with a course of antibiotics. Back when Edison was a boy, these infections either resolved on their own or smoldered and raged within, causing worse infections of the middle ear, erosion of the ossicular bones, perforation of the ear drum, infections of the mastoid bone, just below the ear canal, and, in the worst cases, spread to the brain and caused meningitis. In 1905, for example, a 57-year-old Edison was rushed to the hospital for a mastoid abscess behind the ear that was “very close to the brain.” He developed another mastoid abscess requiring surgical drainage in February of 1908.

Today, pediatricians are careful to point out that many ear infections are caused by viruses and, thus, antibiotics are not automatically prescribed as in years past. Nevertheless, the risk of developing mastoiditis and deafness, while thankfully rare today, remain a concern.

To this pediatrician, the history of frequent ear infections sounds about right as a cause for his deafness. The wonder of it all, however, is how Edison used it to his advantage. In an April 1925 article that appeared in Cosmopolitan magazine, Edison explained how his “deafness helped you to hear the phonograph:”

“My deafness has not been a handicap but a help to me.”

There were no great specialists, I presume, in that region at the time, but I had doctors. They could do nothing for me. I have been deaf ever since and the fact that I am getting deafer constantly, they tell me, doesn’t bother me. I have been deaf enough for many years to know the worst, and my deafness has not been a handicap but a help to me.

Perhaps the greatest inventor of all time, Edison changed the world with his brilliance and love for creating new ways to improve our lives. For Edison, deafness allowed him to shut himself off from “the particular kind of social intercourse that is small talk…all the meaningless sound that normal people hear.”

It also allowed him to embody his most famous observation that “genius is about 2 percent inspiration and 98 percent perspiration.”