In 2016, the average American’s life expectancy dropped to 78.6 years, the second time in two years the U.S has seen a dip in how long people are expected to live.

And drug overdoses are a big part of the reason why people dying sooner, according to new data released Thursday.

Drug overdose deaths, propelled by the nation’s ongoing opioid crisis, were the most influential factor behind the decline in American life expectancy, said Robert Anderson, who oversees the mortality statistics branch of the National Center for Health Statistics for the Centers for Disease Control and Prevention, which produced the new data released Thursday. These fatal drug overdoses have also killed younger Americans more than any other age group. 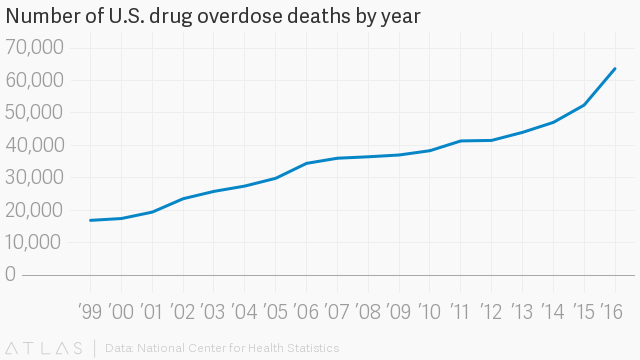 Older people still die most often of heart disease and cancer, but fatal drug overdoses have climbed among younger Americans ages 25 to 44, eroding the nation’s life expectancy, Anderson said. And the opioid crisis shows no signs of slowing down. In 2016, 63,600 people died of causes linked to drug use, largely opioids, including fentanyl and heroin, which accounted for two out of three deaths linked to drug use. That’s up from 52,400 drug overdose deaths a year earlier, the data shows.

“When mortality at the younger ages rises, the impact is to eliminate quite a lot of potential life,” he said.

Chronic diseases — especially heart disease and cancer — remained the largest cause of death among Americans nationwide, based on the CDC’s analysis of 2016 death records. But unintentional injuries, which includes everything from automobile accidents to drug overdoses, are now the third most common cause of death. In 2015, these injuries combined to form the fourth most-common reason for deaths in the U.S.

This is the second consecutive year that life expectancy in the United States fell — in 2015, the average American expected to live 78.7 years. While the change is small — 0.1 year — the overall effect on millions of lives concerns health policymakers.

“When mortality at the younger ages rises, the impact is to eliminate quite a lot of potential life.”

The last time life expectancy in the U.S. dropped two years in a row was in 1963, driven in part by fatal influenza rates, Anderson said. And the only time in modern U.S. history that life expectancy has dropped three consecutive years was during the 1916 to 1918 influenza pandemic, he said.

This new government data supports what public health experts have long speculated — the opioid crisis will likely worsen before it improves. Michael Barnett said his heart sank as he read the report. Barnett, an assistant professor at Harvard University’s T.H. Chan School for Public Health, studies health care delivery systems — how decisions physicians make influence public health, including trends in prescribing medications such as opioids. He said it is no longer hyperbole to describe opioids as a crisis facing the nation.

“It’s just as bad as anybody could have feared,” Barnett said. “As a country, we have not reached the peak of this problem.”

President Donald Trump pledged during the 2016 election to combat opioids. In October, he declared opioid use a public health emergency, but did not offer new money to pay for resources to address the problem.

Barnett said opioid use is “hollowing out of younger individuals who are addicted to opioids” and are dying at rates comparable to diseases for the elderly. He stressed the need for more funding to cover medication-assisted treatment, such as buprenorphine, for people struggling with substance use disorder.

“It needs to be as easy to get buprenorphine as it is to get insulin or blood pressure medication,” he said, referring to a form of medication therapy for opioid use disorder. “It’s not. It’s quite hard.”

Left: A heroin user prepares to shoot up on the street in a South Bronx neighborhood which has the highest rate of heroin-involved overdose deaths in the city on October 7, 2017. (Photo by Spencer Platt/Getty Images)