The year after childbirth is the deadliest for addicted women

Katie Raftery was in a Massachusetts prison for drug-related crimes when she found out she was pregnant with her second child. A longtime heroin user, she was released to a residential drug treatment program where she stayed for seven months, until her baby was born.

She got through pregnancy and drug treatment without a hitch and delivered a healthy baby boy with no complications. But at exactly six weeks after childbirth, Raftery said she started feeling lonely, empty and disengaged.

The feelings were familiar: She had gone through the same period of sadness after her first child was born, and had ended up back on heroin.

“I knew the signs and asked my doctor to put me on buprenorphine. I got scared. I wasn’t just obsessing about picking up heroin. My bones and my entire body craved it,” she recalled.

Raftery had insurance coverage, as nearly everyone in Massachusetts does. She quickly got help from a doctor and avoided a relapse. But in states that have not expanded Medicaid, low-income women lose health care coverage two months after childbirth, which addiction experts say increases the risk that postpartum blues and drug cravings will result in an overdose.

“Where things fall apart is postpartum. We actually abandon women after delivery.”

Sleep deprivation, dramatic hormonal shifts and the day-to-day realities of caring for an infant create enormous stress for all women, but especially for those who are struggling to stay in recovery from drug use.

And yet most medical protocols and social safety net programs are set up to shift attention away from the mother after delivery and focus exclusively on the new baby.

“As a whole, women with substance use disorders do quite well during pregnancy, due in large extent to access to care, insurance coverage and attention from social services,” said Mishka Terplan, an obstetrics and gynecology physician at Virginia Commonwealth University School of Medicine.

“Where things fall apart is postpartum. We actually abandon women after delivery,” he said.

In a study published this month, co-authored by Terplan, researchers tracked more than 4,000 Massachusetts women with an opioid addiction for a year before and a year after delivery. The results confirmed for the first time what many practitioners had observed: Opioid overdose deaths decline during pregnancy and peak in the seven to 12 months postpartum.

Since the study only included Massachusetts residents, lack of insurance following childbirth was not a contributing factor. Even so, postpartum gaps in opioid treatment, such as the discontinuation of addiction medications, may have contributed to some overdose deaths, according to the study.

The opioid epidemic has ensnared a soaring number of Americans of all ages and backgrounds since 1999, addicting nearly 3 million people and killing more than 350,000.

But pregnant women and new moms have been particularly vulnerable. According to an analysis released last week from the Centers for Disease Control and Prevention, the number of pregnant women with an opioid addiction more than quadrupled in the 15 years between 1999 and 2014. 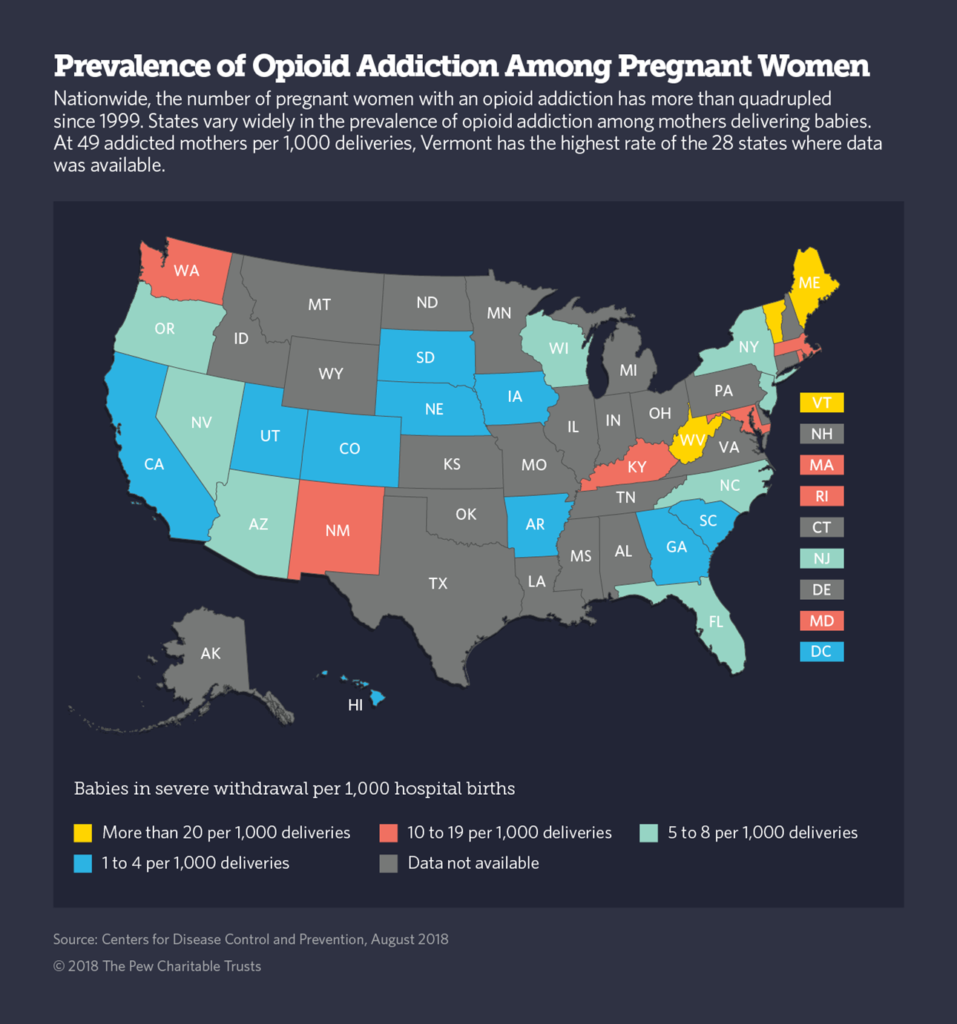 Opioid addiction comes with an inherent risk of overdose death. But for addicted women in the stressful months after childbirth, the odds of dying are much worse.

And yet for many women, access to medical care and social supports evaporates after a baby is born.

Growing evidence suggests that women should receive continuous medical attention during what is now called the “fourth trimester” — a period lasting at least a year after childbirth.

Similarly, traditional obstetrics practices call for women to see the doctor only once after the baby is delivered, usually at about six weeks. After that, it’s up to the woman to decide whether she needs to see a primary care doctor, a psychiatrist or an addiction specialist.

Researchers and physicians who treat pregnant women say that needs to change.

Growing evidence suggests that women should receive continuous medical attention during what is now called the “fourth trimester” — a period lasting at least a year after childbirth. Even for women without an opioid addiction, the likelihood of severe depression soars. Research indicates that nearly 15 percent of all mothers suffer postpartum depression. For minority women and those living in poverty, the rate can more than double.

In May, the American College of Obstetricians and Gynecologists issued new medical guidelines for postpartum care, saying that ongoing attention rather than a single encounter with a medical professional is urgently needed to “reduce severe maternal morbidity and mortality.”

And Missouri, which has not expanded Medicaid to low-income adults, enacted legislation in June, extending traditional Medicaid coverage for a year after childbirth for women who are engaged in addiction treatment.

The federal government also has moved to address the opioid epidemic’s devastating effect on mothers and infants. 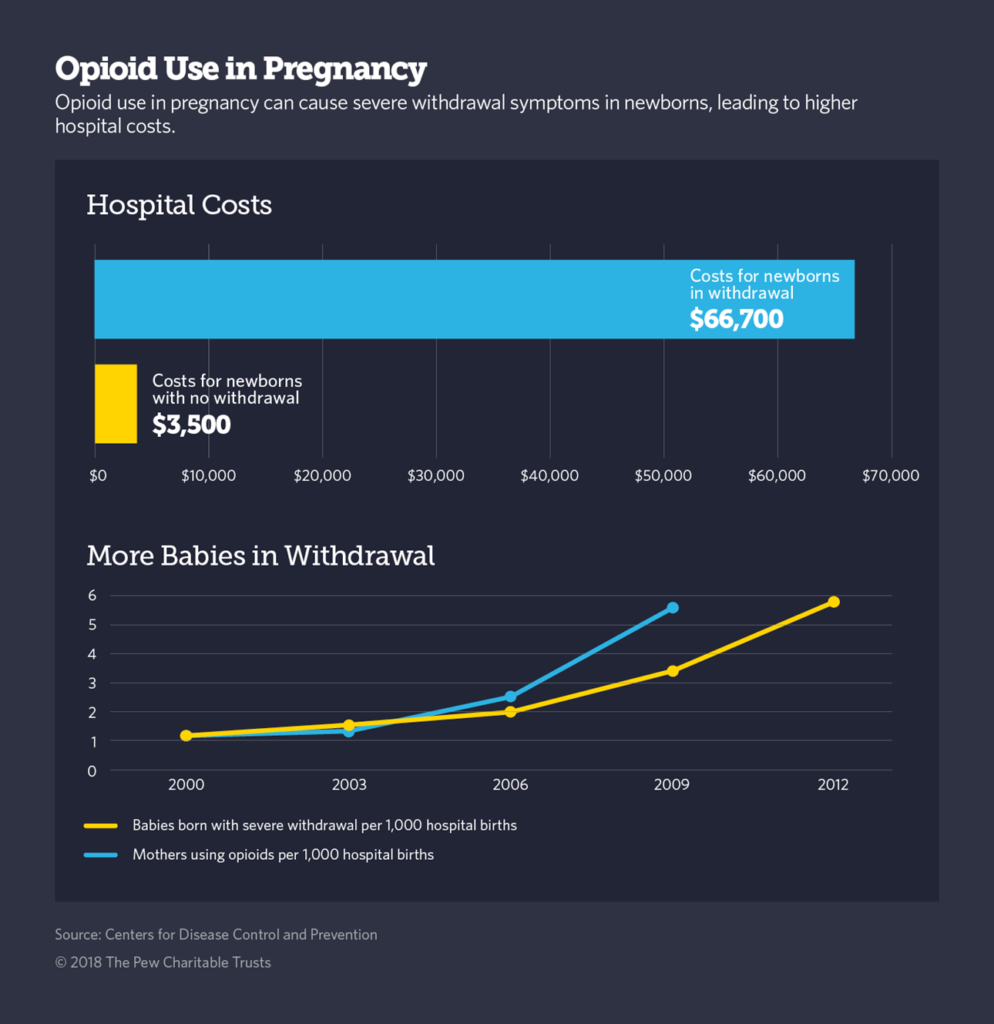 In a June advisory to states, the Centers for Medicare and Medicaid Services recommended that for mothers in non-expansion states who are no longer eligible for Medicaid coverage after childbirth, states may include screening for maternal depression and other behavioral health conditions under traditional Medicaid coverage for routine infant checkups.

The federal advisory specifically addressed the growing prevalence of a condition called neonatal abstinence syndrome, which affects infants born to moms who either used opioids or received medication for an opioid addiction during pregnancy.

The condition, which typically causes irritability, trembling, vomiting and diarrhea in newborns for about four weeks following birth, affects nearly six in 1,000 newborns in the U.S., and its prevalence is growing, according to the National Institute on Drug Abuse.

“Pregnancy seems to be a time for change. Women tend to make healthier decisions during pregnancy. So, for women with an opioid addiction, it can be a motivating moment,” said Davida Schiff, a physician at Massachusetts General Hospital and lead author of the postpartum overdose study.

“We should capitalize on the emotions women feel during pregnancy, and sustain their care or enhance it during the postpartum period, which is arguably the most challenging,” she said. 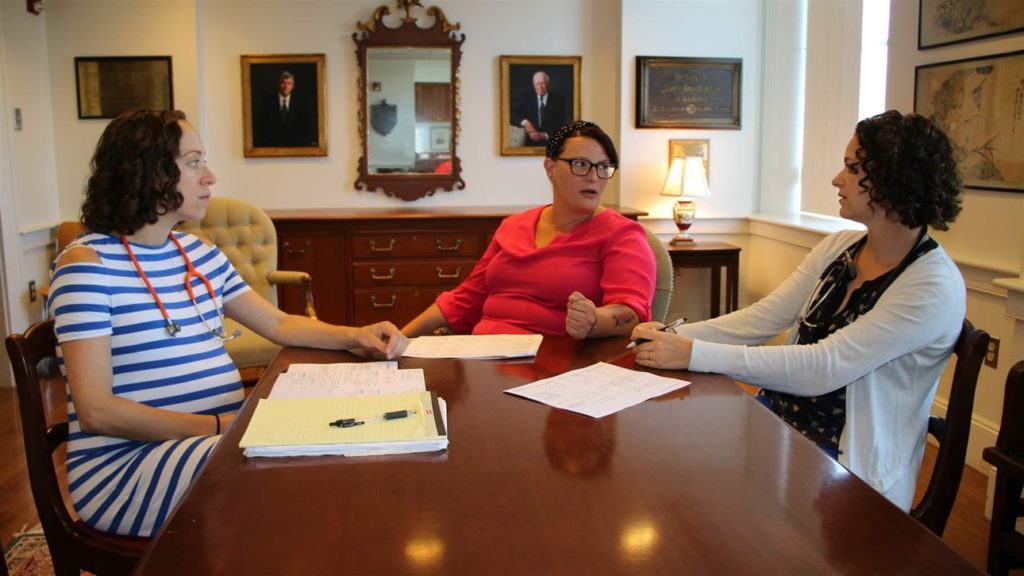 At Boston’s HOPE Clinic for pregnant women with substance use disorders, Medical Director Davida Schiff (left), Recovery Coach Katie Raftery and Clinical Director Jessica Gray discuss treatment plans. A new study shows that women with an opioid addiction are at high risk of an overdose during the year that follows childbirth. Courtesy of Massachusetts General Hospital

In addition to research, Schiff runs a clinic at Massachusetts General Hospital that provides addiction treatment, as well as medical and mental health care for pregnant women and their partners and infants. Called the HOPE Clinic, women’s care plans start at the beginning of their pregnancy and continue through the child’s second year.

A few other specialized clinics in Boston and elsewhere provide similar comprehensive care for women with drug addictions during and after pregnancy, but they are far too rare, Terplan said.

Raftery, now 35, is a recovery coach at HOPE Clinic. She said that having lived through two pregnancies while struggling with addiction and poverty helps her relate to the women she sees there every day. “I try to make things better for them,” she said. “But the truth is, getting through the pregnancy is the easiest part.”