This year the flu came in two waves. Here’s why

The just-ended 2018-2019 flu season was relatively mild compared to the last season, during which nearly 80,000 people in the U.S. died of flu-related illness, according to estimates by the U.S. Centers for Disease Control and Prevention.

This year’s death toll is predicted to be about half, or, in the worst case, three-quarters of that number.

The 2018-2019 season has been unusual, though, because the flu came in two waves: one that peaked at the end of December, and a second that peaked in early March. The two peaks were caused by two different strains of the flu virus, and the protection given by vaccination early in the season may have waned by the time the second strain appeared.

Flu epidemics reoccur every year because of the the way the virus is built and how it interacts with the human immune system. The viruses are highly changeable, acquiring genetic variations, called mutations, even within a single season. The new properties conferred by these mutations can allow the virus to evade the immune response elicited by the flu vaccine.

In addition, the immunity conveyed by a flu shot does not last from year to year. In fact, depending on the flu strain that is circulating, immunity may not even last through one flu season.

Here’s how it all added up over the flu season that has just drawn to a close. 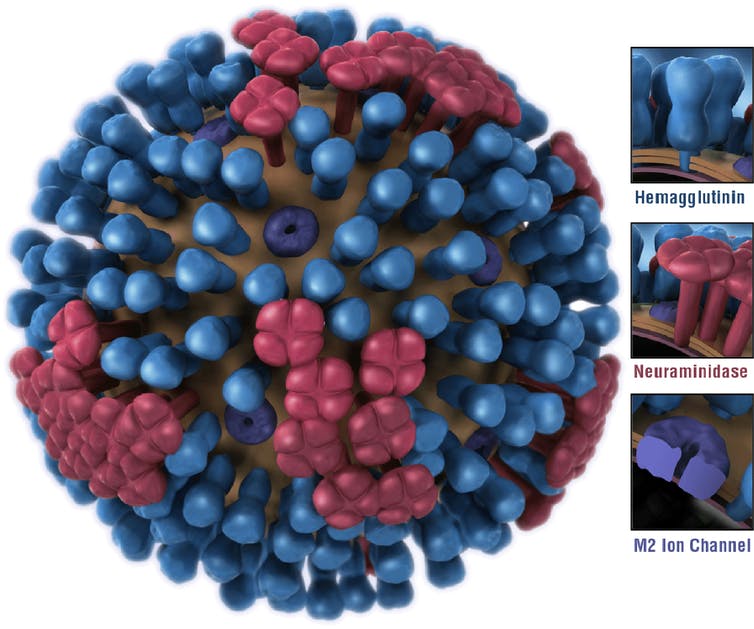 Graphical representation of an influenza virus illustrating the proteins exposed on the surface. Centers for Disease Control and Prevention, National Center for Immunization and Respiratory Diseases

Having flu once can protect from the same virus

When you’re first exposed to the live flu virus, your immune system shifts into gear to try to fend off the invader. Specialized white blood cells, called B-cells, make antibodies that attack two proteins that poke off the surface of the virus, preventing them from doing their jobs. These viral surface proteins, called haemagglutinin (HA) and neuraminidase (NA), are necessary for the virus to survive.

Your immune response may not be fast enough to stop the virus from successfully invading your respiratory tract cells and causing flu symptoms. However, over the course of the infection different parts of the virus evoke an immune response that is more extensive and longer lasting.

Once the infection is over, special cells, called memory B-cells, lie dormant, waiting for a second invasion of the same virus. If they recognize the previously fought flu virus, they launch a rapid immune response.

Vaccines are designed to get your immune system ready to confront a virus without having to first be infected to learn about it. Every year, the World Health Organization predicts which flu strains will circulate and vaccines are formulated with the anticipated strains.

The vaccine is not great at creating memory cells.

Almost all current flu vaccines are made with killed virus. After injection, most of the antibodies made by the immune system’s B-cells are directed toward the “head” region of HA, the part that’s sticking furthest off the protein stalk from the surface of the virus. These antibodies prevent subsequent infection because the HA head is what makes first contact with the cells of the respiratory tract.

Because the dead viruses in the vaccine do not infect and grow, the wave of antibodies they induce is fairly short-lived and the vaccine is not great at creating memory cells. The challenge to your immune system from the vaccine is much more limited than if it were facing a full-on onslaught of live viruses.

That short memory is one reason why you need to be vaccinated every season – even if the same virus is circulating, your immunity to it may be gone by the next year.

The immune systems of all the people exposed to the flu virus are constantly attacking HA and, to a lesser degree, NA. This means that substrains of the flu virus with small changes in these proteins that allow them to evade the attack are more likely to survive – and so get passed on and become more common. This progression of small changes in the virus is called antigenic drift.

Flu viruses also can change more drastically by picking up genetic material from flu viruses in other animals, such as birds and pigs, a process called antigenic shift.

Antigenic drift produces the substrains that cause the yearly epidemics, whereas antigenic shift causes pandemics, such as the 2009 worldwide pandemic caused by the “swine flu.”

Influenza A strains are identified by the versions of HA and NA that they carry; A(H1N1) and A(H3N2) are the strains that are circulating today. Exposure to one set of HA and NA proteins provides little protection when a virus carrying a different set comes along. This is the second reason why you need to be vaccinated every year – even if immunity conveyed by the vaccine lasts long enough, the viruses may have changed since the previous year.

Despite the shortcomings of the vaccines, public health officials still recommend getting that annual flu shot. Even if not perfectly matched, the antibodies the vaccine induces can give partial protection, making the flu less severe than it otherwise would be.

At the start of the 2018-2019 flu season, the dominant circulating strain of virus was A(H1N1), and the flu vaccine was well matched to it.

The more virulent strain, A(H3N2), was present at a low level until mid-January, when its incidence started sharply increasing. At the same time, the number of people with flu-like illness, which had been decreasing, started rising again.

By mid-February, A(H3N2) was the dominant flu strain circulating, and the number of people with flu-like illness was at its peak.

The HA proteins of the many of the A(H3N2) viruses that appeared late in the season were significantly different from the HA of the virus that was used for the vaccine. There were several different substrains of A(H3N2) circulating, and the vaccine was poorly matched to over half of them.

And remember, flu immunity steadily wanes after vaccination. The effectiveness of the vaccine against A(H3N2) starts low, typically about 35%. So, by five months after vaccination, it is essentially zero. People vaccinated in September had little immunity by February to any of the circulating A(H3N3) substrains, even the one used in the vaccine.

These two factors – poor match of the vaccine to the late arising A(H3N3) viruses and waning immunity – account for the second wave of flu in the 2018-2019 season.

Hoping for a one-and-done shot

Scientists are trying to make a “universal vaccine” that would immunize against all, or most, flu strains and also give protection lasting more than one season.

Most strategies attempt to redirect the immune response away from the highly variable HA head region toward other less variable parts of HA or other less mutable viral proteins. Several of these prototypes are in clinical trials.

Not all of these proposed vaccines will prevent infection, but instead are designed to make an infection less severe. That may be the most important goal – not to prevent the flu, but to stop it from killing people.

Left: Flu epidemics recur every year because of the the way the virus is built and how it interacts with the human immune system. Photo by REUTERS/Lucy Nicholson