Matt Pasini was sitting in a therapist’s office with his parents just before his 15th birthday, a year after he first came out as trans, when he told them: “I can’t keep living like this.”

Pasini, who grew up in Queens, New York, was grappling with gender dysphoria, which the American Psychiatric Association’s Diagnostic and Statistical Manual of Mental Disorders (DSM-V), describes as a feeling of distress caused by identifying as a gender other than the one you were assigned at birth. That distress was getting worse with puberty: people misgendered him in public, he was self-conscious, and every month, his menstrual cycle would cause a mental crisis.

“It became a constant reminder that I was born in the wrong body and I didn’t have any control over that,” Pasini, now 19, told the NewsHour.

“Relieving gender dysphoria for a lot of these kids is like unleashing them finally into the world, to go be themselves.” — Dr. Andrew Goodman of the Callen-Lorde Community Health Center

Puberty can cause enormous stress for transgender youth, adding to their already-high rates of anxiety and depression. But relief has come for some in the form of puberty blockers. Originally developed to allay early onset puberty, these drugs give transgender youths more time to decide how to move forward in their transition. Lupron and other puberty blockers are rarely covered by insurance for people under 18 — but in New York, that could change as early as December, potentially making a difference for trans youth in the state.

Along with his parents, therapist and doctor, Pasini, decided after that session that he would start Lupron, one of the most common puberty blockers. Pasini said he noticed a change in how he carried himself, how he interacted with others and how he felt about his body. “I didn’t have as much anxiety in school because of that, and I felt somewhat more comfortable in my body,” he said. “It made me feel a lot more confident. … It made me feel a lot less depressed about myself.”

For some, a ‘life-saving’ treatment

Twelve states and Washington, D.C., cover transition-related health care under Medicaid for transgender people. But most often, that coverage is for adults, so treatments that address gender dysphoria in children remains a gray area.

In 2014, Oregon became the first state to cover puberty blockers for youths under Medicaid, and California’s Department of Managed Health Care has also ordered insurers to cover care related to gender transition. But Dr. Johanna Olson-Kennedy, a pediatrician and medical director of the Center for Transyouth Health and Development at Children’s Hospital Los Angeles, said denials are still common.

READ NEXT: Here’s what most people get wrong about the transgender community

The recent change in New York “is a great thing for transgender young people,” Kim Forte of the Legal Aid Society said. Her group along with The Sylvia Rivera Law Project and Willkie Farr & Gallagher LLP brought a lawsuit against the New York State Department of Health in 2014 that resulted in New York’s expansions of Medicaid coverage for trans people.

“The truth of the matter is that this care can be life-saving for some people,” Forte said.

Puberty blockers, also called pubertal suppressants, work by blocking gonadotropin-releasing hormone, which signals and instructs the pituitary gland to create testosterone and estrogen during puberty. The drugs were originally developed to treat premature puberty and are currently used to remedy several conditions, including endometriosis and prostate cancer. The effects are reversible — if a patient stops taking the drugs, puberty will resume.

Several doctors who treat trans patients told the PBS NewsHour that Lupron eases some of the distress associated with gender dysphoria in young adults.

“Relieving gender dysphoria for a lot of these kids is like unleashing them finally into the world, to go be themselves,” Dr. Andrew Goodman, associate director of medicine at the Callen-Lorde Community Health Center in New York City, said.

This move could be significant for the transgender community, which is disproportionately affected by mental health issues. A 2011 survey of more than 7,500 transgender adults in the U.S. found 41 percent had attempted suicide, compared with 1.6 percent in the general population, while a Harvard study of 180 transgender patients at a Boston community center found that they were diagnosed with depression and anxiety at nearly twice the rate as non-transgender youth.

No large-scale studies have examined the long-term effects of puberty blockers in the treatment of gender dysphoria. A 2010 study by researchers in the Netherlands found that “behavioral and emotional problems and depressive symptoms decreased, while general functioning improved significantly” among 70 people who were treated with puberty blockers between 2000 and 2008. 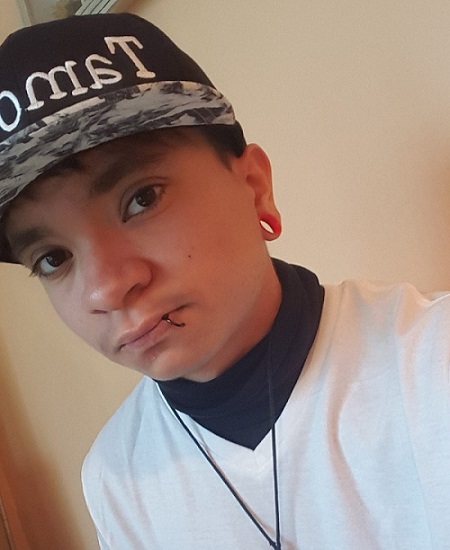 Now 19, Pasini is working on finishing a GED. Photo courtesy of Matt Pasini

Pasini said he experienced hot flashes while adjusting to Lupron, a side effect listed by the U.S. Food and Drug Administration, which also cites clinical studies linking Lupron to loss of bone density in patients who were using it to treat endometriosis and uterine fibroids. A recent Dutch study that followed 34 trans adolescents from the time they began puberty blockers until the age of 22 found no evidence of bone density loss.

What’s the cost of care?

At the moment doctors have to prescribe puberty blockers off-label for gender dysphoria, since the FDA has not approved puberty blockers to treat the condition. A spokesman for AbbVie, the manufacturer of Lupron in the U.S., said the company has never tested it for this purpose — and it has no plans to do so.

This, along with questions about whether the treatment is medically necessary, contributes to some insurers denying coverage, according to Olson-Kennedy. She added that the FDA has not approved any other drug treatments for transgender transitioning. Without insurance, each monthly injection of Lupron can cost roughly anywhere from $1100 to $2500.

“They’re not really affordable for your average person at all,” Olson-Kennedy said. “People take second [mortgages] out on their homes. They charge their credit cards. They do all kinds of things. It’s absurd … And people who don’t have the resources just don’t do it.”

Dr. John Steever, director of special programs at Mount Sinai Adolescent Health Center, said that during the often-lengthy appeals process with insurance companies, families will pay out of pocket for the treatment.

In one case, the mother of a 13-year-old transgender girl did not want to wait for the insurance appeal process, Steever said. “Before we could really do all the letters to the insurance company to get them to pay for it … the mom went out and just purchased it and just put it on her credit card. I was floored,” he said.

Other families have purchased the medication from Canada or India because it’s cheaper, Steever said, adding that he does not encourage anyone to buy drugs on the black market.

Taking Lupron can also prevent the costs of surgeries to change secondary sex characteristics, such as top surgery to remove breasts, Goodman said.

“For an adult, once those changes have happened, they’re much more difficult to undo,” Goodman said. “If those changes never happen, it’s much easier to work with hormones and the other therapies we have.”

Cindy, whose trans daughter Danielle began using Lupron at age 13, said that their insurance covered the drug for 18 months before suddenly stopping. (She asked that the NewsHour not use her last name.)

The family enlisted a lawyer to help dispute the denial, who asked Danielle what would happen if she could not take Lupron anymore. She answered that she would kill herself.

“She didn’t want to start growing a beard and an Adam’s apple and start turning into a man when that’s not who she is,” Cindy said of her daughter.

During the insurance appeal, Cindy paid $1100 for one month of Lupron, a cost that was eventually reimbursed. But even if it hadn’t been, “we would find a way,” she said. “[Danielle] has a lot of support from both sides of her family and we’d figure it out. But I wouldn’t just stop her treatment.”

Left: Matt Pasini, a 19-year-old transgender man, was 14 years old when he began taking puberty blockers, a treatment that he said helped his anxiety and improved his confidence. Photo courtesy of Matt Pasini