WASHINGTON — After expressing frustration at the slow pace of approval for coronavirus treatments, President Donald Trump was set to announce on Sunday the emergency authorization of convalescent plasma for COVID-19 patients.

The announcement will come after days of White House officials suggesting there were politically motivated delays by the Food and Drug Administration in approving a vaccine and therapeutics for the disease that has upended Trump’s reelection chances.

On the eve of the Republican National Convention, Trump was set to issue the emergency order — which would make it easier for some patients to obtain the treatment — in a news conference Sunday evening, according to White House officials.

The blood plasma, taken from patients who have recovered from the coronavirus and rich in antibodies, may provide benefits to those battling with the disease. But the evidence has been inconclusive as to how it works or how best to administer it.

Many scientists and physicians believe that convalescent plasma might provide some benefit but it is far from a breakthrough. It is rich in antibodies that could be helpful in fighting the coronavirus, but the evidence so far has not been conclusive about whether it works, when to administer it and what dose is needed.

The White House had grown agitated with the pace of the plasma approval, but the accusations of a slowdown, which were presented without evidence, were just the latest assault from Trump’s team on the so-called “deep state” bureaucracy. White House chief of staff Mark Meadows did not deal in specifics, but said “we’ve looked at a number of people that are not being as diligent as they should be in terms of getting to the bottom of it.”

“This president is about cutting red tape,” said Meadows in an interview on ABC’s “This Week. “He had to make sure that they felt the heat. If they don’t see the light, they need to feel the heat because the American people are suffering.”

The push on Sunday came a day after Trump tweeted sharp criticism on the process to treat the virus, which has killed more than 175,000 Americans and imperiled his reelection chances. The White House has sunk vast resources into an expedited process to develop a vaccine and Trump aides have been banking on it being an “October surprise” that could help the president make up ground in the polls. 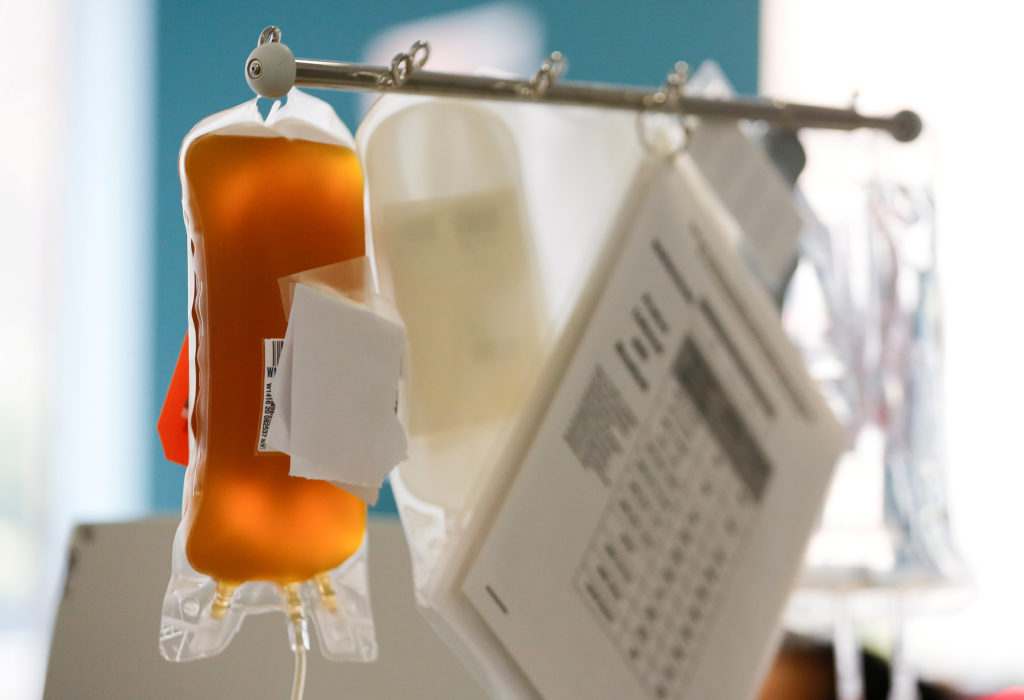 FILE PHOTO: Convalescent plasma from a recovered coronavirus disease (COVID-19) patient is seen at the Central Seattle Donor Center of Bloodworks Northwest during the outbreak in Seattle, Washington, U.S. April 17, 2020. The plasma from recovered patients will be used in an experimental treatment study for current coronavirus patients. Photo by Lindsey Wasson/Reuters.

“The deep state, or whoever, over at the FDA is making it very difficult for drug companies to get people in order to test the vaccines and therapeutics,” Trump tweeted. “Obviously, they are hoping to delay the answer until after November 3rd. Must focus on speed, and saving lives!”

More than 64,000 patients in the U.S. have been given convalescent plasma, a century-old approach to fend off flu and measles before vaccines. It’s a go-to tactic when new diseases come along, and history suggests it works against some, but not all, infections.

There’s no solid evidence yet that it fights the coronavirus and, if so, how best to use it.

The Mayo Clinic reported preliminary data from 35,000 coronavirus patients treated with plasma, and said there were fewer deaths among people given plasma within three days of diagnosis, and also among those given plasma containing the highest levels of virus-fighting antibodies.

But it wasn’t a formal study. The patients were treated in different ways in hospitals around the country as part of an FDA program designed to speed access to the experimental therapy. That so-called “expanded access” program tracks what happens to the recipients, but it cannot prove the plasma — and not other care they received — was the real reason for improvement.

There’s been little data on how effective it is or whether it must be administered fairly early in an illness to make a significant difference, said Dr. William Schaffner, an infectious diseases expert at Vanderbilt University.

Rigorous studies underway around the country are designed to get that proof, by comparing similar patients randomly assigned to get plasma or a dummy infusion in addition to regular care. But those studies have been difficult to finish as the virus waxes and wanes in different cities. Also, some patients have requested plasma rather than agreeing to a study that might give them a placebo instead. 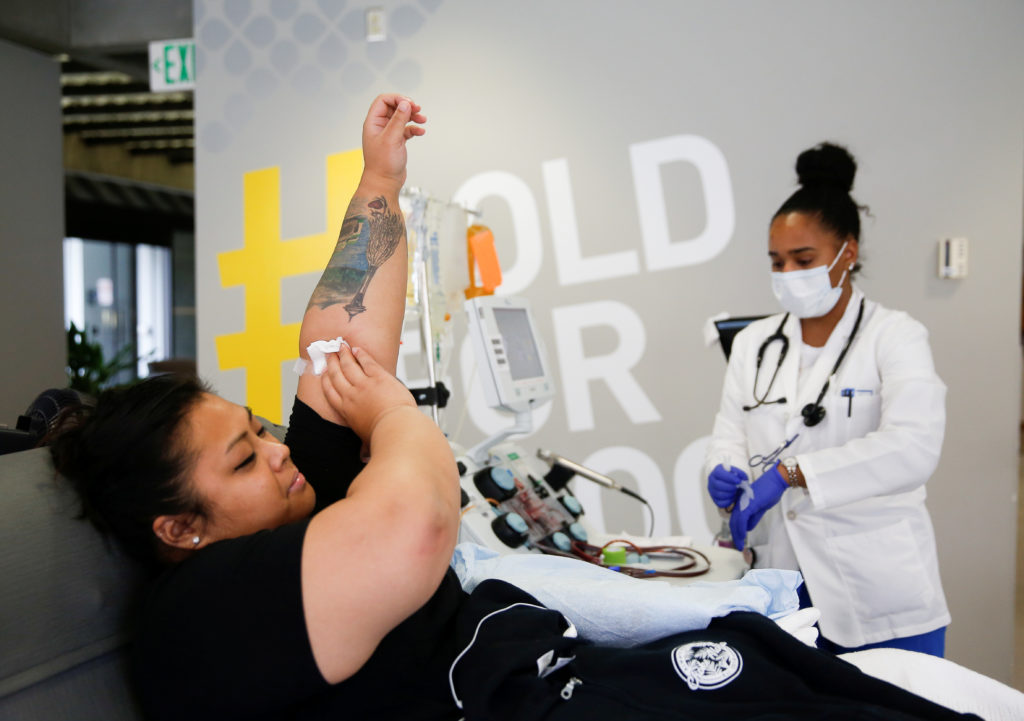 Melissa Cruz, an ER technician for Valley Medical Center who has recovered from the coronavirus disease (COVID-19) she contracted from a patient, holds up her arm after donating convalescent plasma with the help of phlebotomist Jenee Wilson at the Central Seattle Donor Center of Bloodworks Northwest during the outbreak in Seattle, Washington, U.S. April 17, 2020. The plasma from recovered patients will be used in an experimental treatment study for current coronavirus patients. Photo by Lindsey Wasson/Reuters.

“I firmly reject the idea they would slow-walk anything or accelerate anything based on any political consideration or any consideration other than what is best for the public health and a real sense of mission to patients,” Gottlieb told CBS’s “Face the Nation.”

Hundreds of drugs are currently being developed as possible treatments against the coronavirus infection, taking a range of approaches.

Trump, in press conferences, “has made all kinds of therapeutic suggestions,” which have not proven to be supported by science — and are even dangerous, Schaffner said. That includes statements about the possible value of treating COVID-19 patients with ultraviolet light and bleach. Trump reportedly also recently became enthusiastic about oleandrin, a plant extract derived from a toxic shrub that scientists immediately warned against.

But the president is perhaps best known for his early and ardent embrace of the malaria drugs hydroxychloroquine and chloroquine.

The FDA in late March granted emergency authorization for distribution of the drugs for treating COVID. But in June, the agency revoked the authorization in light of growing evidence they don’t work and could cause serious side effects.

Not only that, the FDA warned doctors against prescribing the drugs in combination with remdesivir, a drug that was shown to help patients with COVID-19. The FDA said the anti-malaria drugs can reduce the effectiveness of remdesivir, which the FDA cleared for emergency use in May.

A top FDA official who is overseeing COVID vaccine trials had vowed to resign if the Trump administration approves a vaccine before it is shown to be safe and effective. Peter Marks, director of the FDA’s Center for Biologics Evaluation and Research, made his promise during a conference call earlier in the month with pharmaceutical executives, government officials and others, Reuters reported Friday.

“I think this administration has put more pressure on the Food and Drug Administration than I can remember” ever happening in the past, Schaffner said.

“Everybody is just a little bit nervous,” he said.

Left: U.S. President Donald Trump speaks prior to signing a proclamation on the 100th anniversary of the ratification of the 19th Amendment of the U.S. Constitution during a ceremony in the Blue Room at the White House in Washington, U.S., August 18, 2020. Photo by Carlos Barria/Reuters.