Veterinarians, teachers, and students are stepping up to form America’s volunteer vaccinator workforce

Gone were the sort of family scenes that Wormser said she was accustomed to seeing in delivery rooms before COVID-19, when women giving birth often had a number of people cheering them on. Wormser said she saw many of her colleagues don PPE to assist COVID-positive women in labor, often spending hours face-to-face with them.

“I was scared for all of us but everybody went and did their job,” Wormser said. “We were so anxiously awaiting a vaccine because we knew that that would turn the corner in allowing patients to come in and get the care that they need.”

READ MORE: These ‘vaccine hunters’ are chasing down appointments for people who need them most

So when the first COVID-19 vaccine was authorized for emergency use by the FDA in December, Wormser said she “couldn’t pass up the opportunity to get shots in arms.”

Wormser is one of thousands of Americans with a medical background that has volunteered to administer vaccines in recent months as the U.S. ramps up its efforts to get as many people as possible inoculated against the coronavirus. As vaccine supply increases, so does the need for people to administer them — and the Biden administration has encouraged states to allow people across the medical community, from veterinarians to optometrists to medical students, to volunteer in the effort.

Wormser said putting in the extra hours to volunteer at Fair Haven Community Health Care’s vaccination clinics has been more than worth it. She estimated on March 25 that she’d given about 180 doses of vaccine over three days of volunteering.

“A lot of our old timers who have retired … have come back to do vaccinations. The atmosphere is so upbeat and it is so exciting to be involved and to be with old friends as well as your current colleagues,” Wormser said. 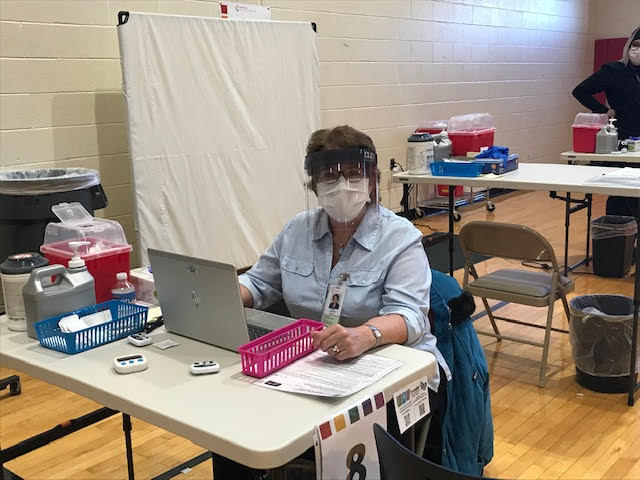 Ellen Wormser volunteers as a vaccinator at a clinic hosted by Fair Haven Community Care in Connecticut. Courtesy of Wormser.

As a COVID vaccinator, Wormser has also been able to re-connect with members of the community she’s served for 37 years as a nurse-midwife. When one couple sat down to get their vaccines during a recent March clinic, they looked at her nametag and realized that she had delivered their baby. “I said, ‘Well how old is your baby?’” Wormser recalled. “They said, ‘She’s 25.’ So we had a good laugh over that.”

Across the country, Americans have been drawing on a vast range of career experience as COVID vaccinators. Before John Dietter trained to administer the vaccine, he created a lesson plan about it as part of his job teaching life science to seventh graders in Rockport, Maine. Dietter is also certified as an advanced Emergency Medical Technician to administer intramuscular injections such as vaccines.

“Because I feel like so much of the challenge right now is around basic science literacy, I had done a unit with my students on the history of vaccination, and how specifically these vaccines have been expedited,” Dietter said.

When he found out he could volunteer as a vaccinator in the small island community of Stonington, he thought it would be a small yet meaningful way to help out. “I’m trying in my work to be present for students, trying to educate them and put aside some of their fears around [COVID-19]. But this felt like a really tangible thing that I could do to help,” he said.

WATCH: Pastor reveals the reasons behind COVID vaccine hesitancy in the evangelical community

Although Dr. Michelle Peacock had not administered human injections before volunteering as a COVID vaccinator in Reno, Nevada, she had plenty of experience doing so to dogs, cats, horses and other animals in her work as an emergency veterinarian. Like Wormser, the pandemic has had a significant impact on Peacock’s job — with many more Americans getting pets, she said, business has “exploded,” and it’s not unusual for her to show up to work at 4 p.m. and work until 4 a.m. the next day.

“We’re an essential business so we stayed open, and the stress that goes along with the possibility of getting COVID was just really tremendous for us,” Peacock said. “We can’t social distance at work, and we’re not letting clients into the hospital, so we go out and get their pets. It’s stressful for the clients and stressful for us. So I wanted to help in any way I could.”

“I have administered so many vaccines that I have no idea how to keep count.”

After training alongside a registered nurse, Peacock began administering vaccines at the Reno Livestock Event Center where there is a mass vaccination site. While some patients were initially confused about seeing “DVM” on her name tag — for Doctor of Veterinary Medicine — she said they quickly grew comfortable when they realized they could share stories about their pets.

She said the experience was a great antidote to the past year of working under constant stress. “I just felt like a hero.”

For some medical schools, calling upon graduate students interested in practical training was an obvious choice when thinking about how to build up the COVID vaccine workforce.

After University of Massachusetts Medical School’s chancellor Michael Collins co-wrote an op-ed with the school’s president Marty Meehan in early January encouraging federal and state leaders to tap into medical students to help distribute, track and administer all the vaccine doses that would soon be arriving, the school formed a “Vaccine Corps” of its own.

Through this program, they’ve enlisted more than 6,998 volunteers from more than a dozen colleges and universities to help out with everything from administering vaccines to performing administrative roles like greeting patients at clinics, according to Mark Shelton, associate vice chancellor of communications for the medical school. In this cohort, there are graduate students from UMass Medical School’s nursing, medicine and biomedical sciences programs. 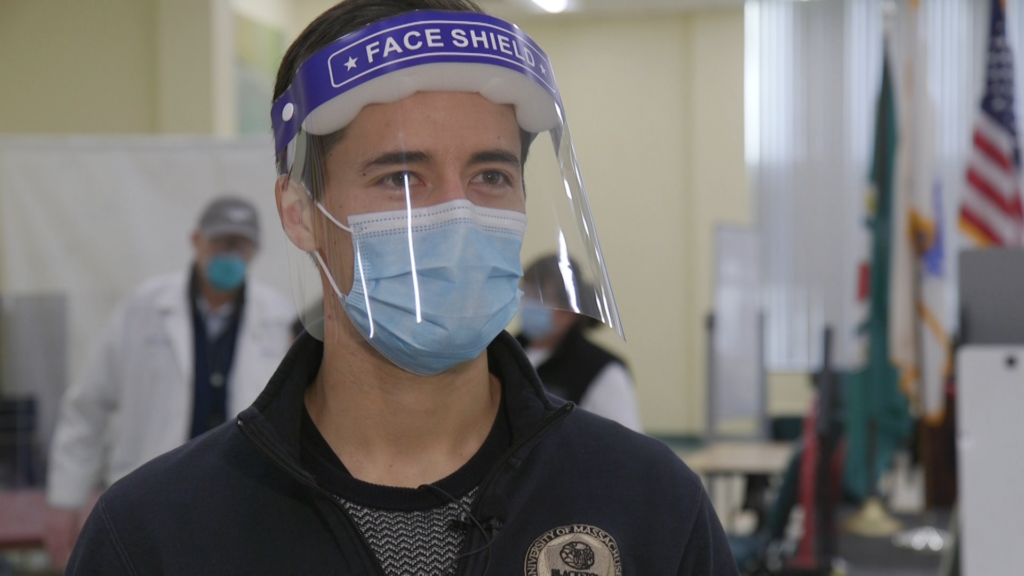 “Anyone should be able to give a vaccine by the time they graduate,” said Christopher Lee, a rising fourth-year medical student at UMass, adding that it made sense to train “a large army of students to be able to vaccinate the community” in response to the pandemic. Lee helped design a curriculum along with the nursing school to standardize the training students already have so that all qualified volunteers — whether they’re in their first year or fourth year — are able to administer the vaccine. He estimated there were 161 students at the first session in early January.

“I have administered so many vaccines that I have no idea how to keep count,” said Mina Botros, a second-year medical student who was part of the first group of volunteers in what became the Vaccine Corps. He helped coordinate student volunteers to work at community outreach sites in Worcester geared toward vulnerable populations, such as homeless patients and those living in public housing. He estimated that he’d administered close to 1,000 doses at this point. 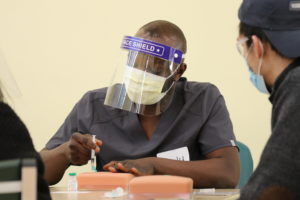 Lee said that after a year of being mostly isolated and doing remote learning, bringing volunteers together to safely train to administer the vaccine was a joyful feeling. And when Lee recently volunteered at a clinic at the Worcester YMCA, he said “it was a relief to see so many people now protected.”

Those feelings — joy, relief — were observed and echoed by many who spoke about their experience administering COVID vaccinations.

“For a lot of folks, this was one of a handful of times that they had gotten out and seen other people,” said Dietter, who volunteered at the clinic in Stonington. “A lot of folks had not been out of their home for months, just trying to stay COVID safe,” he added, noting that many of the patients at the pop-up clinic — which was a two-hour drive from other mass vaccination sites in the state — were senior citizens. “[There were] a lot of pretty joyful folks.”

Clarisza Runtung, a clinical nursing student who is finishing her master’s of science at Georgetown University, said she recently saw a patient at the university’s mass vaccination site in Southeast D.C. who wanted to know whether he could see his dying mother once he had been fully vaccinated.

“It made me realize how much grief and isolation and loneliness and death that people around the world have encountered, not being able to be there for people that they love in many different circumstances,” said Runtung, who added that she has been thinking about her own family in Indonesia, as they have not yet had access to a COVID-19 vaccine. 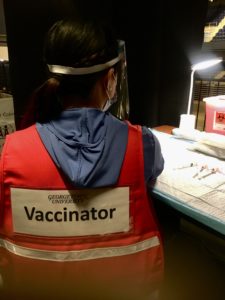 “It’s not the medicine piece of this that’s as important, it’s all the social aspects,” said Dr. Hugh Mighty, the dean of Howard University’s College of Medicine, who’s spent nearly every day on the floor of their vaccine clinics since they opened to patients in the Washington, D.C. metro area. He said well over a thousand medicine, nursing, dentistry and pharmacy students have chipped in too. After living in quarantine for a year, Mighty said it was uplifting to see people “getting back into the world and getting their lives back in order.”

“Everyone is just happy to be there and happy to start fighting back this monster. So as much as they’re glad to get the vaccine, we’re glad to give it,” Wormser said.

The national vaccine rollout has not been perfect, and significant inequities in distribution remain. As of April 13 the CDC reported that among the COVID-19 vaccine recipients who reported their race or ethnicity, nearly two-thirds were white, 11 percent were Hispanic, 9 percent were Black, 5 percent were Asian and 1 percent were American Indian or Alaska Native.

There has also been a fair amount of misinformation circulating about the vaccine, which has made some people hesitant to sit right down and offer up their arm.

Botros said that while a lot of patients come into the clinics without any questions, others may want to sit down and express their concerns about side effects or negative information they’ve read about the vaccine online.

“For a variety of reasons, [patients] hear things, whether it’s social media or in small newsgroups or whatever it happens to be, that might not be completely factually correct. And it scares them. And that’s totally OK, given everything else that’s going on,” Botros said. “I might take an hour to talk to this patient, but I’d so much rather that they feel comfortable … than for them to either receive it and be terrified about it or leave not having wanted it whatsoever.”

Maia Fefer, a first-year student at UMass Medical School, had similar conversations as part of an effort within the school’s Vaccine Corps and the Worcester Housing Authority to have multilingual volunteers reach out to non-English speakers, as well as translate written materials with information about the COVID-19 vaccine. She and her fellow volunteers called around 90 people who had expressed some hesitation about the vaccine from a list provided by the Housing Authority, and fielded questions ranging from the logistical hurdles of getting to vaccination sites to the safety and efficacy of each approved vaccine. Fefer said taking the time to make phone calls did make a difference — by her colleagues’ count, around 20 percent of the people they called decided to get vaccinated afterward.

Fefer said that while she’s only in her first year of training, she’s valued the opportunity to administer COVID-19 vaccines to people in the Worcester community. “Everybody has been very kind and very willing to let us try,” she said.

Vaccinators said they hope the creativity and innovation spurred by these volunteer efforts will continue to inform other public health responses in the future.