Updated on April 22 with video of sixth and final segment in the series.

The PBS NewsHour is launching a special series of reports, both on-air and online, about a puzzling disorder that touches many lives across the U.S.: Autism Now will take a unique — and uniquely personal — look at how the condition impacts families, schools and communities. 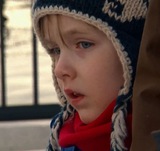 As former anchor Robert MacNeil explains in a preview conversation with Hari Sreenivasan, the subject that drew him back to the NewsHour is one that resonates deeply with his own family and the families of thousands of others. MacNeil’s 6-year-old grandson, Nick, has autism.

MacNeil teamed up with producer Caren Zucker, who has produced many stories on the condition and is the mother of a 16-year-old son with autism, to criss-cross the country for five months, building a series of reports that explores the latest scientific and medical thinking and chronicles the impact of autism on families, educators and clinicians.

The series consists of six parts. For the launch, Jim Lehrer will debrief MacNeil about the series on the NewsHour broadcast on Friday, April 15. The first full report will then air on Monday, April 18.

But, we’re trying something new with these reports on the NewsHour’s website.

Starting Friday, April 15, we’ll debut each report online a day before it airs on the NewsHour’s broadcast. So you can watch part one (about MacNeil’s grandson) online on Friday, April 15, or on-air on Monday, April 18. The second report, about Autism’s prevalence, will be posted online on Monday, April 18, by 6 p.m. ET. You can also watch that report on our site, via our iPhone app or on our YouTube channel and of course – or watch on Tuesday’s NewsHour broadcast. We’ll follow that schedule every day during the series: We’ll post the next report in the series by 6 p.m. ET on the NewsHour website.

It’s part of the NewsHour’s commitment to deliver our trusted brand of journalism to you wherever and whenever you want it.

A full rundown of the series is after the jump.

Part One: Introduction to Nick and Autism as a whole-body experience | Robert MacNeil brings viewers along on a visit with his daughter and grandson Nick in Cambridge, Mass., to see how autism affects the whole family. | Online April 15, on-air April 18

Part Two: Autism Prevalence | Why are the numbers of children with autism increasing? Robert MacNeil visits with experts at the University of California, Davis MIND Institute to see the wide range of different behaviors that comprise the autism spectrum | Online April 18, on-air April 19


We have several resources and opportunities to engage with the series online. These include:

Autism 101 | A breakdown of the basics and a list of useful resources.

Autism Costs | A look how families often struggle with the costs of autism, and how care and costs can vary depending on where you live.

Autism’s First Child | A new look at Caren Zucker and John Donvan’s profile of the first child diagnosed with autism as reported in The Atlantic.

Finally, we know you’ll have questions, comments and feedback. We want to hear from you on the scope and breadth of the series. There are a few ways you can participate:

Join us online on Wednesday, April 20, at 1 p.m. ET for a special LIVE chat, moderated by correspondent Hari Sreenivasan, with series producer Caren Zucker, experts from the series, as well as members of some of the families profiled.

You can also pose your questions for Robert MacNeil: Hari Sreenivasan will also have a follow-up Q&A with him during the week of April 25, where he’ll pose some of your questions on the series. Leave your questions in the comments section here or on our special feedback page.

Thanks for watching and visiting the NewsHour’s site.