What history revealed about cities that socially distanced during a pandemic

In 2005, in response to the threat of Avian influenza (or H5N1), a flurry of pandemic preparedness planning began in Washington and across the nation that would set the groundwork for what’s happening now. This work was notable for a goal that may be most resonant today: mitigating the spread of respiratory viruses in communities before too many people get ill. Back then, the community mitigation methods were seen as so socially and economically disruptive they would only be deployed in worst-case scenarios, such as that seen during the 1918-1919 influenza pandemic. Enter 2020.

The hypothesis behind these community mitigation strategies is now popularly known as “flattening the curve.” 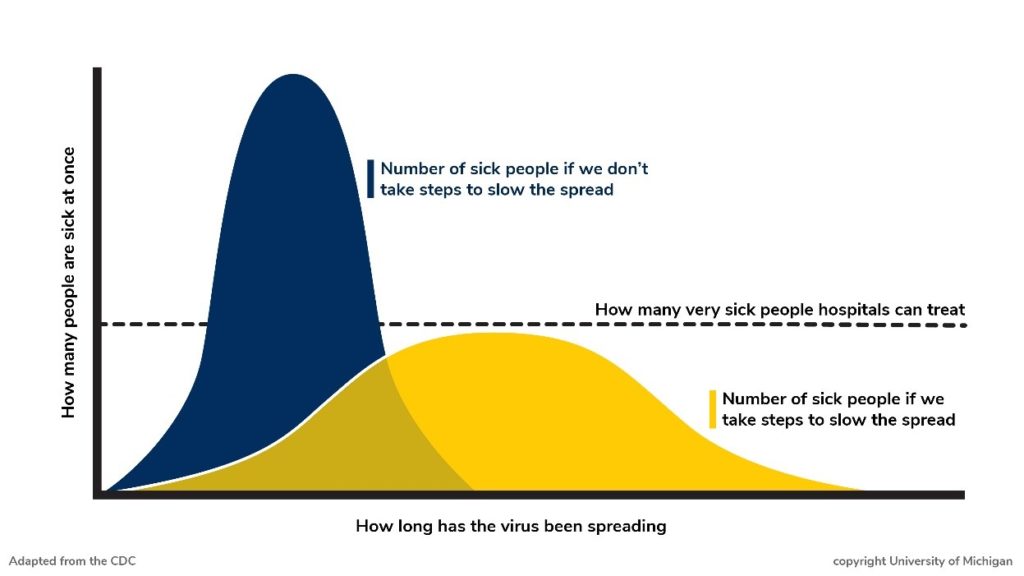 The idea is that by shifting the epidemic curve to the right with a series of non-pharmaceutical interventions (prevention measures like social distancing or hygiene when a vaccine isn’t available), one would hopefully see a delay in the outbreak’s peak; a decompression of the burden on hospitals and infrastructure; a diminution of overall cases and health impacts; and more time to develop new medical therapies and preventive vaccines.

And for an entire year — from 2006 to 2007 — a team of medical historians at the University of Michigan Center for the History of Medicine and the Centers for Disease Control and Prevention’s Division of Quarantine and Global Migration scrambled to prove this hypothesis. I was part of that history-making historical research, and was one of the authors of the resulting paper.

We studied the strategies employed during the 1918-1919 influenza pandemic, which killed at least 40 million people around the globe and 500,000 to 750,000 Americans. We visited over 130 libraries, archival repositories and special collections across the nation to gather tens of thousands of pages of newspaper articles, public health reports, federal, state and municipal bulletins, and multiple other types of documents.

We looked at old newspapers, local bulletins and public health reports for far more than merely the dates when these NPIs were turned on or off. Equally important was gaining insight on the context surrounding such decisions. For example, how did various branches of government work together at the municipal, state and federal level? What were the citizens’ response to such disruptive measures? Did people protest or push back against NPI orders? All these questions, and many more, can be approached only by such a deep, fine-grained and careful analysis of the pandemic that took place last century. 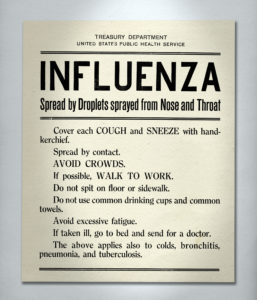 A poster by the U.S. Public Health Service, 1918. Photo by Fototeca Gilardi/Getty Images

With those materials collected and organized, we evaluated the nonpharmaceutical interventions (NPIs) employed in 43 large U.S. cities during the fall and winter waves of the pandemic. Specifically, they were:

Our research successfully demonstrated that cities that did three things enjoyed far lower morbidity and mortality numbers than those cities that did not act in such a manner. They acted early, before the virus had a chance to spread widely in a community. They acted in a layered manner, using more than one NPI at a time. And they used the interventions for long durations, because the NPIs do not prevent cases, they merely delay viral spread and buy time. In other words, for the worst-case and most deadly case scenarios, social distancing measures could help flatten the curve — results that have since been reproduced in several historical, modeling and epidemiological studies.

This work became an important part of the evidence base for the CDC’s 2007 “Pre-pandemic Planning Guidance,” and the 2017 update.

It has also been tested in real life. During the first days of the 2009 H1N1 influenza pandemic, the Mexican Health Ministry ordered a wide-reaching menu of NPIs, similar to those that worked in 1918. Sick people were isolated and their not-yet-ill contacts quarantined at home. Public gatherings were canceled, including a major soccer match, and schools were closed. The measures did contain the spread of influenza but were abandoned within 18 days, once it became clear that the H1N1 influenza virus, albeit widespread in pandemic numbers, was not much more lethal than seasonal influenza. In that case, the measures were thus too costly in terms of loss of revenue and social disruption to proceed.

But the new coronavirus is a different story.

As we apply these community mitigation strategies today, on a global level never before seen in human history, time will tell us how much they helped reduce the threat of the COVID-19 pandemic. But we are already seeing evidence that NPIs, when properly implemented and followed, flatten the curve — not only in American communities but all around the world.

To be sure, these policies are incredibly disruptive to the social fabric of our nation, not to mention the global economy. But the COVID-19 crisis is so easily spread and deadly, especially for those in the high-risk categories, that our public health and medical experts are prescribing the adage: It is far better to be safe than sorry. The cost of human life, especially for our own loved ones, far outweighs the drive to reopen the economy as soon (indeed, too soon) as possible. 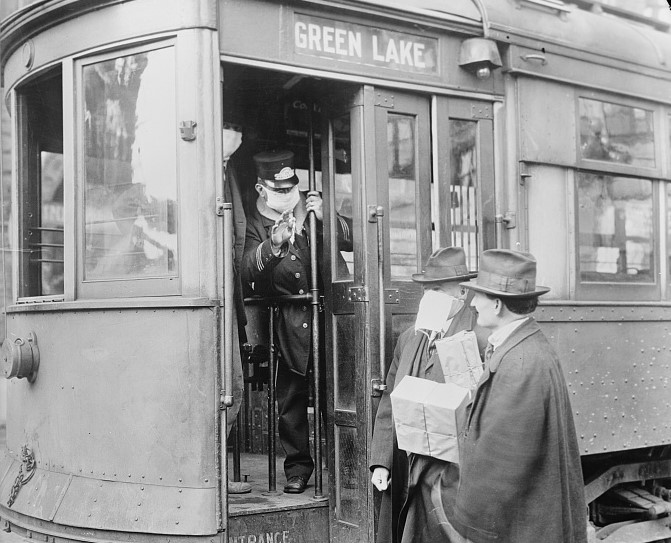 Precautions taken in Seattle during the 1918 influenza epidemic included not permitting anyone to ride on street cars without wearing a mask. Photo courtesy American National Red Cross photograph collection/ Library of Congress

When the challenging crisis we find ourselves battling right now passes, we must remember, remember and remember again the three key lessons of both pandemics past:

We never really conquer microbes—at best, we wrestle them to a draw.

And, it is no longer an issue of if we are going to have another contagious catastrophe in our new world order, it’s a matter of when.

That means we start preparing for the next infectious battle as soon as we are done with this one. If anything good comes out of this global crisis, it will be that we had the opportunity to study and develop other life-saving measures for when we face newly emerging infectious diseases, epidemics and pandemics in the future.

Why does “flattening the curve” work? PBS NewsHour spoke with mathematical biologist Alun Lloyd to better understand how our actions can affect the reproduction rate of the virus, and how a slower curve can affect our economy.

Left: A nurse checking on a patient at the Walter Reed Hospital Flu Ward during the influenza pandemic, Washington D.C., circa 1918. Photo by Harris & Ewing/Underwood Archives/Getty Images