In a year when the coronavirus has racked up an unbearable death toll, recent preliminary data from the federal government suggests an overlap with another staggering figure: More Americans died from drug overdose in a 12-month period than at any other point in history.

While the vaccination of more than 1 million Americans in recent days is buoying hope that health officials could be gaining a foothold over the pandemic, the same can’t be said for the opioid crisis, which has been killing people for far longer than COVID-19 and in the last year alone claimed tens of thousands of American lives. The numbers confirm early anecdotal reports of a rise in fatalities and follow a decrease in the year before.

How many people recently died from drug overdose?

Drug overdoses were linked to more than 81,000 people’s deaths between June 2019 and May 2020, according to the Centers for Disease Control and Prevention, jumping 18 percent compared to the previous 12-month period. Such deaths rose 20 percent or more in 25 states and the District of Columbia, the report said.

The number had begun to climb before the coronavirus pandemic was declared a national emergency in March, the report said, but “drug overdose deaths appear to have accelerated during the COVID-19 pandemic.”

In April, 2,146 people died of opioid overdose, followed by 3,388 deaths in May, marking the largest monthly increases since 2015 when the federal government began collecting this data. 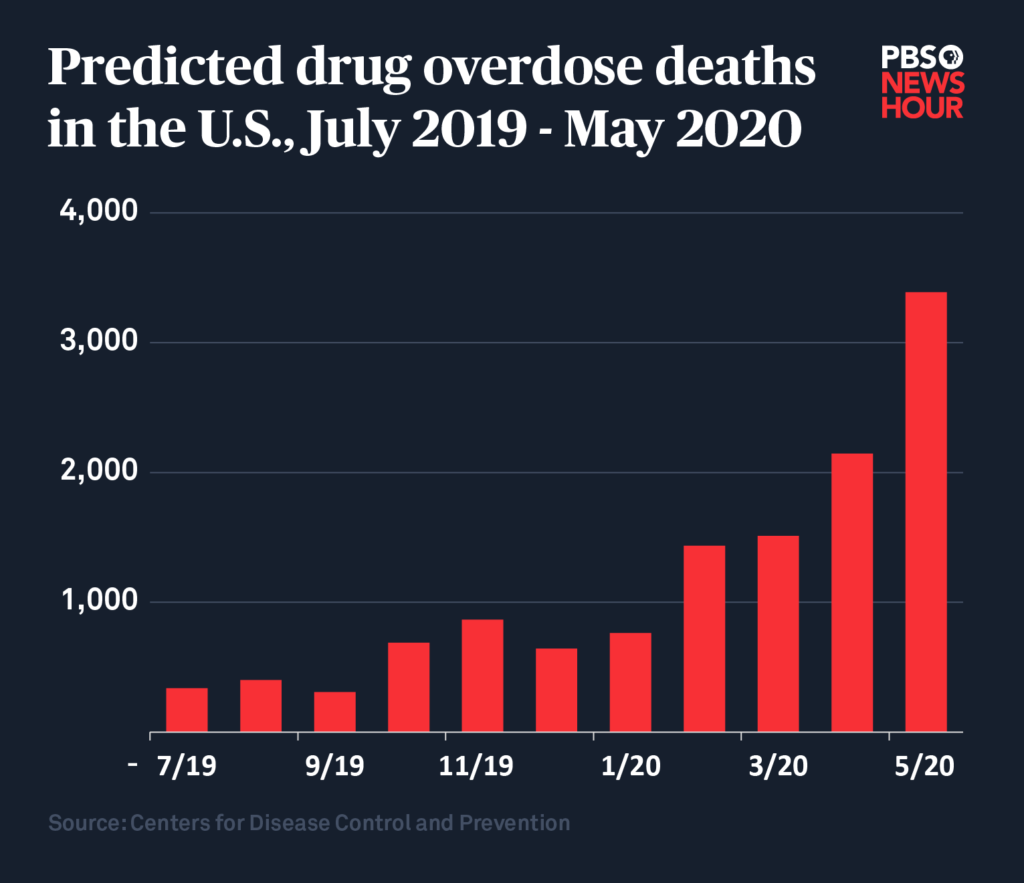 As in recent years, synthetic opioids such as fentanyl and carfentanil drove most overdose deaths, and increased by 38 percent between June 2019 and May 2020. All of these estimates are likely an undercount, said Dr. Keith Humphreys, a psychology professor at Stanford University and a research scientist at the Veterans Health Administration.

Deaths of Americans after a drug overdose have been growing for two decades. In November 2017, President Donald Trump’s Commission on Combating Drug Addiction and the Opioid Crisis released 56 recommendations designed to rein in that public health emergency, including the need for more research and development of more options for medication-assisted treatment.

In the last year, the country has been overwhelmed by the coronavirus crisis, Humphreys said, but months from now, after millions of Americans are inoculated against COVID-19, millions more have acquired some degree of immunity after getting sick and the pandemic has hopefully subsided, people will be confronted with soaring overdoses and fatalities linked to drug use and once again be reminded that under coronavirus, the opioid crisis “got a heckuva lot worse.”

Why have overdose deaths gone up?

These latest figures further support observations by experts that thousands of Americans struggling with substance use have been suffering beyond the immediate effects of the pandemic, which has complicated access to basic resources. 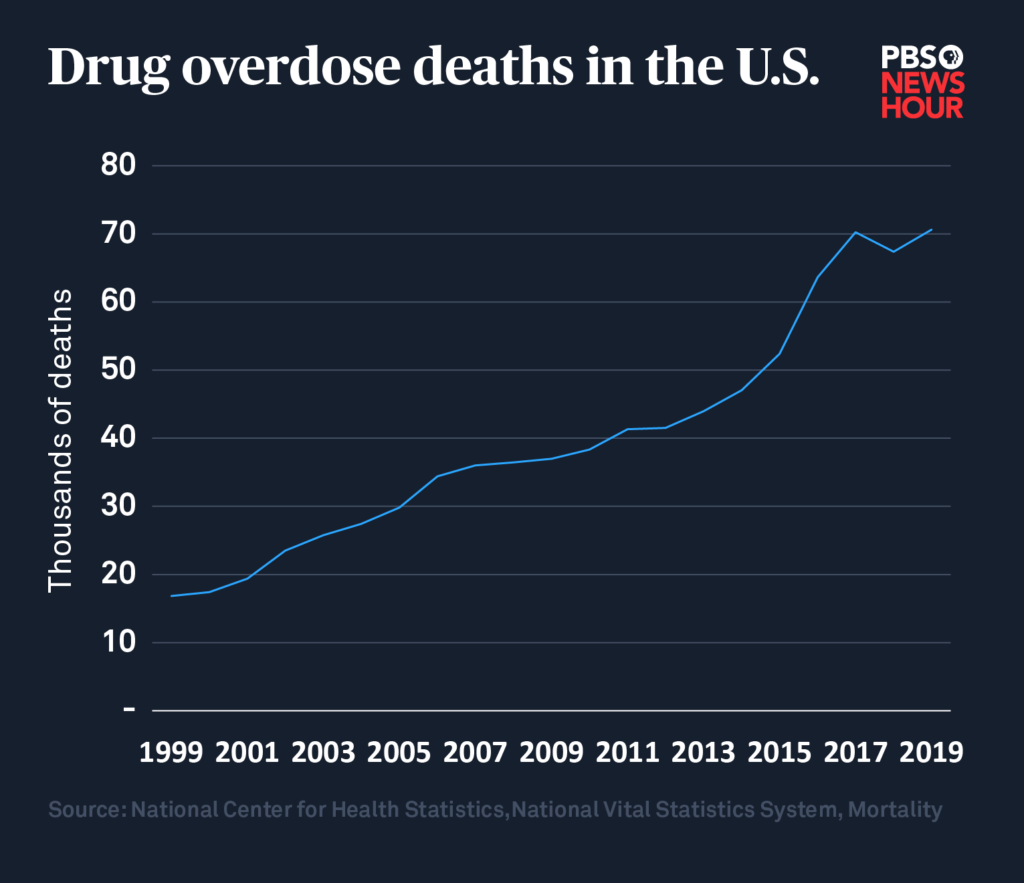 Earlier during the COVID-19 pandemic, stay-at-home orders were put into place to prevent unnecessary illness, death and collapse of the U.S. health care system. With a recent third surge of infections breaking daily records for new hospitalizations and deaths linked to the virus, several states have kept a patchwork of those public health precautions in place as the U.S. has failed to contain COVID-19.

But in doing so, transportation to clinics became complicated. Many people feared going to a doctor’s office could spread the virus further. In-person talk therapy sessions were abandoned for video conferencing. Some experts have said those options, while better than nothing, are not as effective for people who recently decided to enter recovery.

“We need to take care of people suffering from unintended consequences.”

CDC Director Robert Redfield cautioned the nation in a released statement that “it’s important to not lose sight of different groups being affected in other ways. We need to take care of people suffering from unintended consequences.”

One way that the coronavirus interrupted people’s access to medication-assisted treatment is that it created more bottlenecks, Humphreys said. When you go to a clinic, you must check in and wait in lines. Everyone wears personal protective equipment that must be changed often. All those steps taken to avoid spreading COVID-19 lower the provider’s capacity to take more people, Humphreys said.

“That means people have to wait longer for care, and while they wait, people may die,” he said.

What can be done to prevent more fatal overdoses?

With care disrupted, health advocates, including the American Medical Association, have for months urged the federal government to make it easier for people in recovery from opioid use to gain access to buprenorphine and methadone as part of their medication-assisted treatment.

As fatal overdoses began to spike, the CDC this month asked doctors, nurses, first responders and others to focus on ways to:

On a Dec. 8 call with reporters, former Rep. Patrick Kennedy, D.-R.I., said, “We need to bring that same sense of urgency to these deaths of despair hiding in plain sight.”

“People have to wait longer for care, and while they wait, people may die.”

Kennedy, who has said he is under consideration to lead the Office of National Drug Control Policy for the Biden administration, noted that the vaccination campaigns rolling out across the country could provide an opportunity to check on people struggling with mental health and substance use. Something as simple as a basic series of screening questions when giving the vaccine could help health care providers “identify and focus on those who are in jeopardy,” he said.

“If you’re already predisposed to addiction, this COVID crisis is going to make you even more vulnerable,” Kennedy said.

Left: BOSTON, MA - AUGUST 28: More than 2,000 purple flags are planted to represent every Massachusetts resident who has died of an opioid overdose since 2017 on the lawn of the First Congregational Church in Natick, MA on Aug. 28, 2019. (Photo by David L. Ryan/The Boston Globe via Getty Images)