With summer approaching, public health officials have a cautionary vacation buzzkill: Public pools are teeming with parasites and bacteria linked to diarrhea and Legionnaire’s disease, which in some cases could cause serious illnesses.

That’s according to a recent report from the Centers for Disease Control and Prevention. Between 2000 and 2014, researchers said, 493 disease outbreaks were reported from public swimming holes, such as hotels and hot tubs. Thirty-two percent of those outbreaks — defined as when at least two people reported similar illnesses — occurred in hotels.

In all, more than 27,200 people in that 14-year period became ill after swimming in contaminated water, according to the report, which studied pool-related disease outbreaks across 46 states and Puerto Rico. Eight people died.

Here’s what you need to know about swimming in public places this summer.

What’s making people sick?
If you go for a swim this summer and then feel off, there’s a solid chance you are hosting a gnarly parasite.

Cryptosporidium, also known as Crypto, was the worst repeat offender, according to CDC researchers who analyzed confirmed outbreaks included in the study. That’s because this diarrhea-causing protozoan parasite is highly resistant to chlorine, making it tough to tame once the germ enters the water. Crypto accounts for nearly 60 percent of confirmed U.S. pool-related infectious disease outbreaks.

If someone accidentally releases Crypto-infected fecal matter into a swimming pool, either while showing off their backstroke or because they didn’t properly clean themselves after using the bathroom, parasites are set loose in the water. People may then swallow Crypto germs, and the cycle continues.

Other germs found in outbreaks originating in treated water included Legionella, which is linked to Legionnaires disease and Pontiac fever, as well as Pseudomonas.

Michele Hvalsa, who serves as chief of the CDC’s Health Swimming Program, said people often forget how challenging it can be to properly maintain public pools and hotel hot tubs. Draining the pool or hyperchlorinating the water are two ways to get rid of these germs. But Crypto is alive and well in more places than most of us would like to believe, Hvalsa said.

What are the symptoms?
Tell-tale symptoms of Crypto include watery diarrhea, stomach cramps, fever, vomiting and dehydration. For people with compromised immune systems, whether that’s from something like AIDS or from undergoing certain cancer or transplant treatments, this parasite can be deadly. Pregnant women and children are also at heightened risk.

What months pose the greatest risk?
Summer months — August, July and June — produced the highest rates of outbreaks linked to swimming pools and hot tubs, but March is starting to show more outbreaks, too, especially as more facilities offer indoor water activities, according to the CDC’s data.

How to protect yourself
Shower before you swim, and don’t get in the water if you have diarrhea. People who host Cryptosporidium can endure long-lasting diarrhea for as much two weeks.

Hvalsa said she still swims frequently and usually brings along her two toddlers, but she said she takes precautions and checks a pool’s inspection scores just as she would a restaurant’s inspection grade from the local health department. She said the general public can do the same. 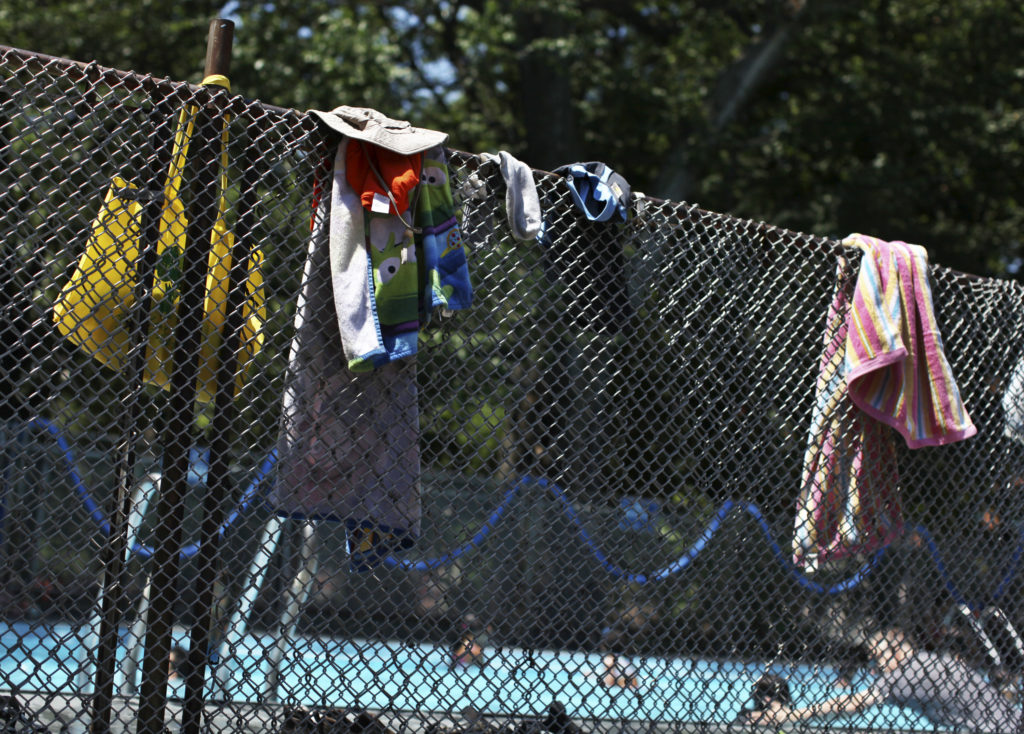 Swimming towels hang from a fence outside a pool at Tompkins Square Park in New York.
REUTERS/Shannon Stapleton

Creating or swallowing poopy water isn’t the only thing to avoid when going for a chlorinated swim this summer. To maintain swimming pools and hot tubs and curb public health problems, the typical U.S. maxim is this: “If a little bit of chlorine is good, a lot must be better.” That’s not true, said Ernest Blatchley, an engineer at Purdue University who studies how ultraviolet radiation (another form of water treatment) and chlorine influence water quality. He said chemical contaminants, such as byproducts of chlorination, can have negative health effects, too.

When chlorine comes into contact with human bodily fluids, including urea, the chemical reactions that follow result in dozens, if not hundreds of byproducts. Some of these byproducts — like cyanogen chloride — are highly volatile and toxic, yet there is very little pool-based data, research and understanding of how these chemicals impact our world and well-being, Blatchley said.

“There’s never going to be zero risk of infection associated with microbial pathogens in your swimming pool, or your drinking water for matter, but you can approach zero” if you take precautions and properly maintain recreational treated water, Blatchley said. 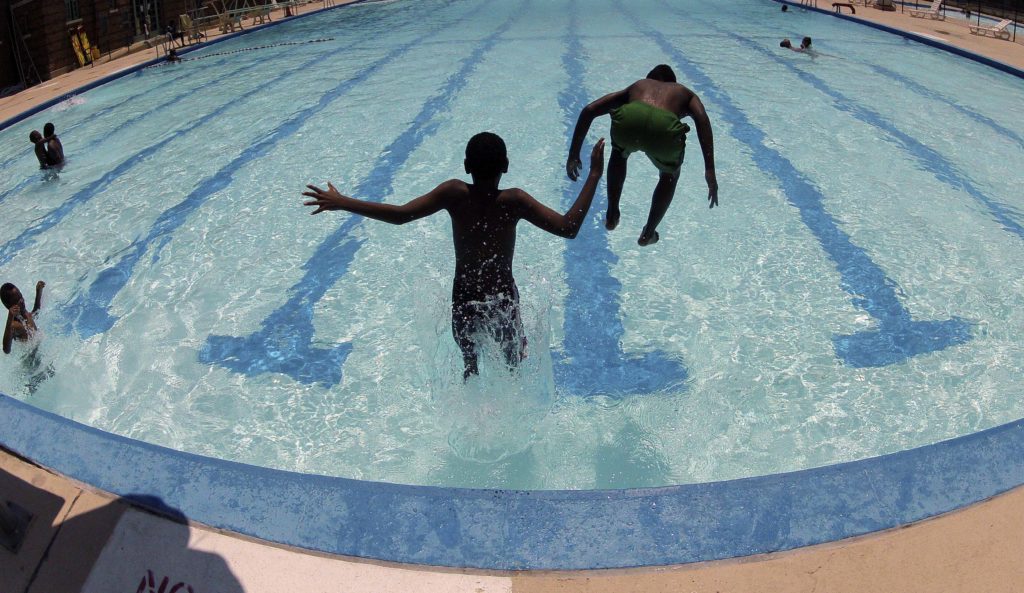 Kids jump into Banneker Pool to try and beat the heat gripping the nation’s capital while in Washington, July 2, 2012. REUTERS/Larry Downing

Why it matters
Swimming is one of the nation’s most popular forms of exercise and deserves more attention, Blatchley said. But aside from the CDC’s guidance in the Model Aquatic Health Code, released in 2014, Blatchley said that few regulations exist for recreational treated pools and water parks.

“There are literally hundreds of disinfection byproducts that are identified in swimming pool water,” he said. Most of them are very poorly documented and understood. On “only a handful of them do we have reasonable data [about] how they’re formed and how they decay.” And there’s even less data on how those byproducts interact with the human body.

Left: Public pools are teeming with parasites and bacteria linked to diarrhea and Legionnaire’s disease, which in some cases could cause serious illnesses, according to the CDC. REUTERS/Maxim Shemetov