Artificial sweetener reveals how much pee is in the average pool

Approximately 20 gallons. That’s how much human urine courses through your average swimming pool, according to a chemical analysis published Wednesday in the journal Environmental Science & Technology Letters.

One hotel had a hot tub with 20 times as much urine as its swimming pool.

Environmental toxicologist Xing-Fang Li and her colleagues at the University of Alberta, Edmonton tallied the pee in commercial-sized swimming pools by relying on a seemingly unavoidable part of the modern human diet: artificial sweeteners. Sure, you’ve seen these “sugar alternatives” in tea and juice, but they’re also found in everything from ketchup to kettle corn to english muffins. Americans consume about 17 million metric tons of artificial sweeteners per year.

And these sweeteners remain everywhere even after leaving your body. The compounds are resistant to acid, relatively stable when exposed to heat and can survive some types of wastewater treatment. Hence why toxicologists now view the food additives as emerging pollutants.

Li and company used the pervasiveness of one artificial sweetener — acesulfame potassium or Ace-K — to measure the quantity of human waste left behind by people at 10 pools and 5 hot tubs spread across hotels and recreational parks in two Canadian cities. Ace-K is a good surrogate for pee because its exclusively excreted by the urinary system.

Over the course of three weeks, they measured the equivalent of eight gallons of urine in a 110,000-gallon pool and 20 gallons of pee in a 220,000-gallon pool. Based on these numbers, science writer Erika Engelhaupt estimates your standard neighborhood pool contains about two gallons of piss.

The researchers also found that hot tubs, in general, carried more urine per gallon than swimming pools. One hotel had a hot tub with 20 times as much urine as its swimming pool. 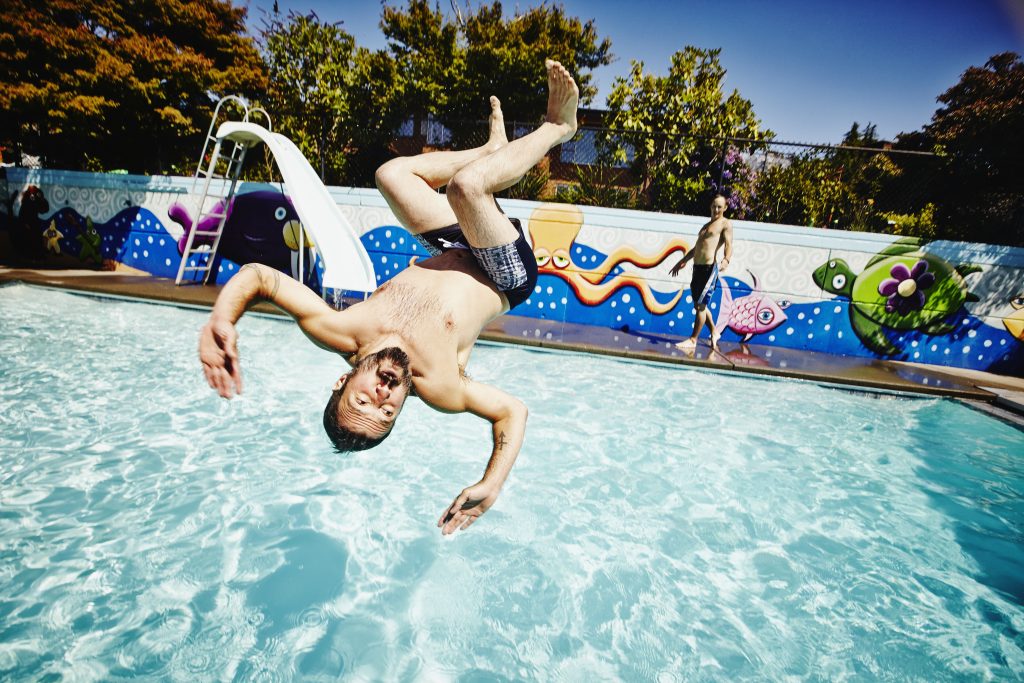 Environmental toxicologists at the University of Alberta, Edmonton found one Canadian hotel had a hot tub with 20 times as much urine as its swimming pool. Photo by Thomas Barwick/via Getty Images

Needless to say, these trends are worrisome for health reasons. Despite what you may have heard, urine is not sterile and carries a fair amount of microbial life. Also, as the researchers highlight, urine harbors lots of nitrogen compounds — urea, ammonia and amino acids — that can react with pool disinfectants like chlorine to form toxic compounds.

So if you’re at the pool and need to tinkle, maybe take the time to use a toilet.

Left: Environmental toxicologists at the University of Alberta, Edmonton have tallied how much pee is in commercial-sized swimming pools. Photo by Andrew Wagner and Kristin Hugo