THOUSAND OAKS, Calif. — A wildfire that tore through Malibu mansions and working-class suburban homes in Southern California’s hills and canyons has killed two people and had more than doubled in size by Saturday.

Officials took advantage of temporarily calm conditions to assess damage from the blaze that has burned 109 square miles north and west of downtown Los Angeles. Firefighters were searching burned-out neighborhoods for new destruction from two blazes that have already destroyed 150 homes.

Los Angeles County sheriff’s Chief John Benedict said two people have been found dead but provided no details on the deaths. Wildfires burning across California have now killed 11 people, including nine found dead in a massive fire in Northern California that destroyed the town of Paradise. 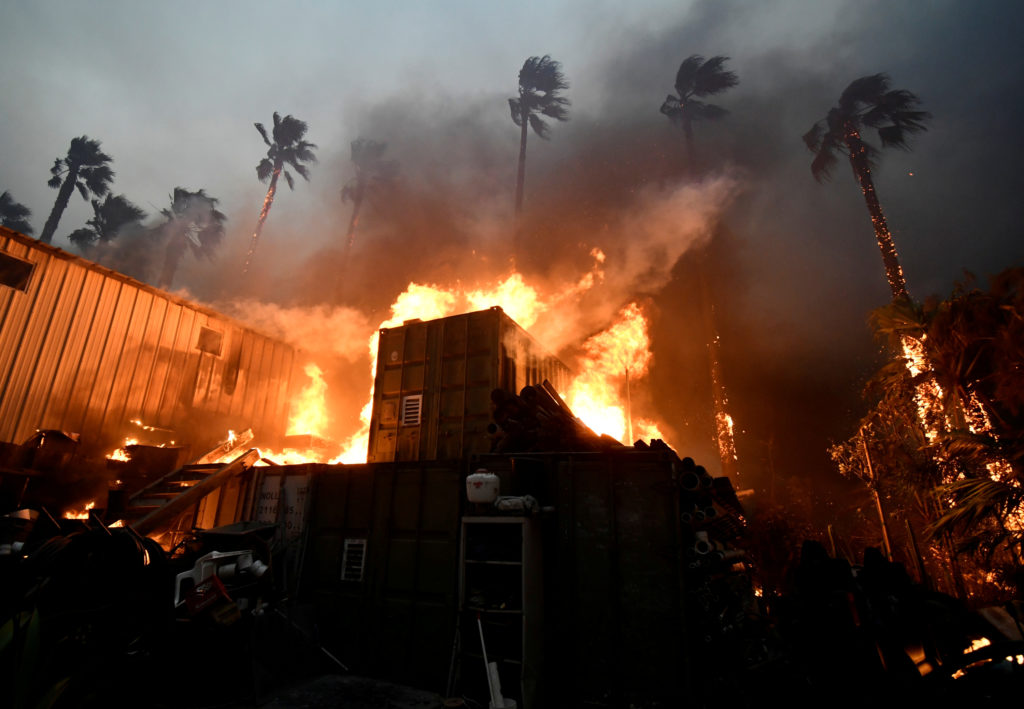 A home is engulfed in flames during the Woolsey Fire in Malibu, California, U.S. November 9, 2018. Photo by Gene Blevins/Reuters

In the south, a smoky haze still hung in blue skies, with the vicious winds that drove the flames in their first two days gone and expected to stay away until Sunday. Firefighters scrambled in the narrow window of calm to try to block the two wildfires that have blazed a path of destruction toward the sea.

In less than two days, the Hill and Woolsey fires had prompted evacuation orders for more than 250,000 people, including the entire city of Malibu, which is home to some of Hollywood’s biggest celebrities, officials said.

The lull Saturday could give firefighters a chance to control the edges of the blazes and to swap fire crews, replacing firefighters who had worked for two days without rest, Los Angeles County Fire Chief Daryl Osby said.

But with the winds returning, it’s likely more homes would be lost, Osby warned.

“There’s not going to be any relief in this firefight,” he said. 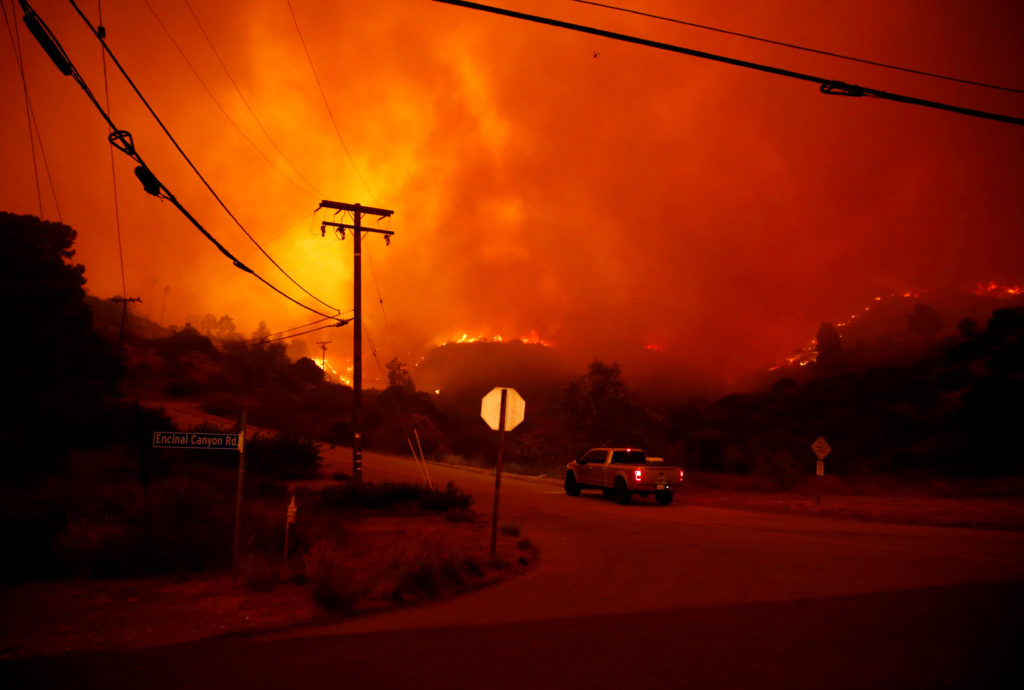 By late Friday night, the smaller Hill fire’s advance had halted, but the Woolsey fire kept surging. The two fires erupted Thursday as warnings of extreme fire danger covered much of the state because of dry weather and blowing winds.

In Northern California, a wildfire killed some in their cars as they tried to flee the racing flames. The state’s most destructive fire in at least a century has burned down more than 6,700 buildings, almost all of them homes.

President Donald Trump issued an emergency declaration providing federal funding to help firefighters battling the wildfires across California.
In the south, flames leapt and raged from Thousand Oaks south through the northwestern San Fernando Valley of Los Angeles and appeared headed toward the Pacific Ocean.

Thousand Oaks already was reeling from a shooting at a country music bar that killed a dozen people this week when it was besieged by fire. It raged on both sides of the city and shut down part of the main freeway into town.

“It’s devastating. It’s like ‘welcome to hell,’” resident Cynthia Ball said about the dual disasters outside a teen center serving as a shelter for evacuees. “I don’t even know what to say. It’s like we’re all walking around kind of in a trance.”

Three-quarters of the city of 130,000 was under evacuation orders — and that likely included people affected by the shooting, Mayor Andy Fox said.

The entire coastal enclave of Malibu also was ordered to flee, with Lady Gaga, Kim Kardashian West and Guillermo del Toro among the celebrities forced to abandon their homes.

I am thinking so deeply for everyone who is suffering today from these abominable fires & grieving the loss of their homes or loved ones. I’m sitting here with many of you wondering if my home will burst into flames. All we can do is pray together & for each other. God Bless You.

We lost our home, but we are all safe and that’s the important thing. Gonna be offline for awhile.

The Woolsey blaze also destroyed the home of “Dr. Strange” director Scott Derrickson and the historic Paramount Ranch where HBO’s “Westworld” and many other shows have been filmed.

The flames spread so fast that firefighters couldn’t be everywhere at once. Residents took matters into their own hands.

People tried to save a mansion by hurling buckets of water from a swimming pool onto burning brush over a fence. Two men with shovels struggled to dig a firebreak in front of a line of burning brush.

“Even though the wind has died down, stay on guard,” he urged. “We’re in the seventh year of a drought. Our weather conditions out there, and our fuel conditions are absolutely right for fire … when we ask you to leave, please leave early.”

David Fink decided to stay and watch his house. He was caught by surprise when sparks and embers from the furiously burning foothills above him began igniting all around his San Fernando Valley neighborhood.

“It was 10 minutes, it was some little bit of embers, and things like that and then it just went wild and exploded, from ridge to ridge and then all the way around here … we were surrounded,” Fink told KABC-TV.

“The wind came up, and it was just raining (embers), and I was just burning on my arms,” he said.

He used a garden hose to douse most of the embers. But by nightfall, several homes had burned and authorities had ordered an evacuation.

At a mobile home park for seniors in Newbury Park, the fire came so quickly that residents had no time to gather medications and documents. Firefighters carried people from homes and put them in empty seats of their neighbors’ cars, said Carol Napoli, 74.

Napoli left with her friend, the friend’s son and her mother who is in her 90s and had to leave behind her oxygen tank.

“We drove through flames to get out. They had us in like a caravan,” Napoli said. “My girlfriend was driving. She said, ‘I don’t know if I can do this …’ Her son said, ‘Mom you have to, you have to drive through the flames.’”

Left: A firefighter hoses down a condo unit during the Woolsey Fire in Malibu, California, U.S. November 9, 2018. Photo by Gene Blevins/Reuters