3 lawmakers on surviving the Jan. 6 attack and what the Capitol is like for them now

Warning: This footage may contain graphic images of violence

On Jan. 6 2021, supporters of President Donald Trump breached the U.S. Capitol building in an attempt to disrupt the democratic process. As a predominantly white crowd threatened lawmakers, there was a particular concern that people of color would be targeted by the violence. A year later, Reps. Sheila Jackson Lee, D-Texas, Grace Meng, D-N.Y. and Norma Torres, D-Calif., reflected on what it was like being trapped in the Capitol that day as lawmakers of color — and what their jobs have been like since.

Watch the conversation hosted by PBS NewsHour’s Nicole Ellis in the live player above. 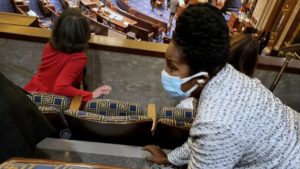 During a conversation with the PBS NewsHour, Lee recalled sitting in the House chambers for what she thought would be a routine step in a peaceful transfer of power when she noticed some members moving quickly off the House floor and other attendees shouting, “lock the doors!” Crawling at points on her hands and knees, leaving some of her belongings on the floor behind her, she managed to keep her phone, she says. “As news was breaking, the phone began ringing and we made it to a point of exit.”

Phone alerts were the first indication for Torres that something was amiss. Perched on one of the balconies– due to COVID restrictions– she began receiving and sharing text alerts with her colleagues about the imminent threat, when a sense of grave danger for her personally sunk in. “I can’t just blend in. It doesn’t matter how many hoodies I put over my head. I am still a Latina,” she recalled. 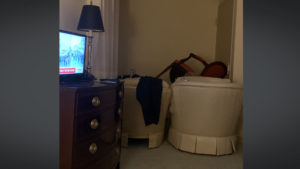 For Meng, the day remained quiet until she heard on the emergency intercom mid-day that the building was being evacuated. She arrived at the Capitol early as a COVID precaution to avoid large crowds, setting up shop in a women’s lounge between House Speaker Nancy Pelosi’s office and the House Chambers with Rep. Lois Frankel, D-Fla. Armed with water bottles and office furniture, the two women barricaded the door while watching insurrectionists on a television in the lounge as they shouted racist epithets, steal the speaker’s lectern, and vandalize the building as they walked past the lounge entrance. “I was afraid that just based on how I looked, that they would assume that I was not, let’s say, a fan of President Trump and I was nervous how they would react if I did happen to encounter them,” Meng said.

She says that as a member of Congress, sharing what happened and communicating her feelings, has allowed her to process the traumatizing experience. Her concern, now, is for the staffers and Capitol police officers that may still be fearful of returning to the Capitol. “This is one of the best places to work in the country, in the world, and these people just for the most part, want to make a difference and are idealistic … They shouldn’t have to be worried for their safety in coming to work. We should be able to protect them in the capitol,” Meng said.

Watch the conversations with Lee, Meng and Torres in the player above this story.