The Pew Research Center’s follow-up study on religion in the U.S. found that Americans are becoming less religious, specifically young adults who are less likely to believe in God, pray daily or regularly attend religious services.

Pew’s Religious Landscape Study assessed the various religious beliefs and practices of 35,000 U.S. adults, ages 18 and up, and saw the percentage of people who said they believe in God drop from 92 percent in 2007 to 89 percent in 2014. Pew said the trend is largely attributed to “nones,” or millenials, who, unlike previous generations, have little to no attachment to organized religion.

“Nones” account for about 23 percent of the U.S. adult population, Pew reported in May. The 56 million of adults who identify as atheists, agnostics or “nothing in particular” actually outnumber the number of Catholics (51 million) and Protestants (36 million) in the U.S.

Pew’s recent findings are comparable to Gallup’s study in June that found Americans’ confidence in organized religion to be at an all-time low.

Let’s look at how the “nones” are affecting the overall downward trend of Americans losing their religion.

1. The number of Americans who are “absolutely certain” God exists dropped.

Statistically, the number of U.S. adults who say they generally believe in God “declined modestly,” Pew said. But the percentage of Americans who say they are “absolutely certain” God exists had a more significant drop from 71 percent in 2007 to 63 percent in 2014.

When perusing the responses by age group, Pew found that about seven in 10 Americans in the “silent generation” and Baby Boomer groups say there are” absolutely certain” of their belief in God. By comparison, only half of millennials say the same thing.

2. The numbers of Americans who are religiously unaffiliated has grown rapidly.

The “nones,” or religiously unaffiliated jumped up seven percentage points from 16 percent in 2007 to 23 percent in 2014.

“As older cohorts of adults (comprised mainly of self-identified Christians) pass away, they are being replaced by a new cohort of young adults who display far lower levels of attachment to organized religion than their parents’ and grandparents’ generations did when they were the same age,” Pew said.

Along political party lines, Pew found that “nones” now make up most of the Democratic base, at 28 percent, more than any religious group. In 2007, it was 19 percent. The Republican Party, too, has seen more “nones” in its membership, but at a much slower rate at 14 percent in 2014, compared to 10 percent in 2007.

3. Despite the overall trend, the faithful are just as religious as they were in 2007. Meanwhile, religious commitment among “nones” dropped.

“[T]his religiously affiliated population – comprising a wide variety of Protestants as well as Catholics, Jews, Mormons, Muslims, Buddhists, Hindus and adherents of other faith traditions – is, on the whole, just as religiously committed today as when the study was first conducted in 2007,” Pew said.

Also, two-thirds of these religiously affiliated adults said they pray every day and that religion is very important to them, the report found. And about six out of 10 of those individuals say they monthly attend religious services

But Pew pointed out that a portion of the “nones” can be believers, adding that a majority of Americans without a religious affiliation say they believe in God. But the report found that this group, overall, is “far less religiously observant than Americans who identify with a specific faith.” 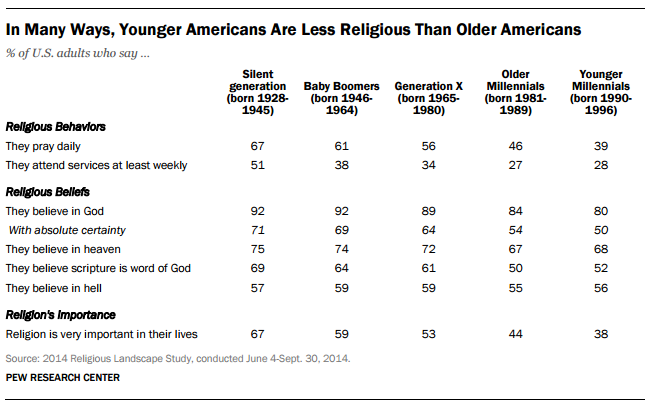 Majorities of the “silent generation” (67 percent) and Baby Boomers (61 percent) say they pray everyday compared with the 39 percent of the youngest millennials, born between 1990 and 1996. Also, only 46 percent of the oldest millennials, born between 1981 and 1989, say they engage in the religious practice. Millennials also had the lowest share of people among the U.S. adult population that say they attend religious services on a weekly basis.

In May, Pew’s Alan Cooperman told the NewsHour that he expected these trends in the U.S. to continue.

Left: People are silhouetted as the sun rises during an Easter sunrise service in Scituate, Massachusetts March 31, 2013. Photo by Jessica Rinaldi/Reuters