30 years after Chernobyl disaster, engineers race against a decaying reactor

CHERNOBYL EXCLUSION ZONE, Ukraine—In the early morning of April 26, 1986, a reactor at the Chernobyl Nuclear Power Plant exploded, spewing radioactive material across the Soviet republics of Ukraine, Belarus and Russia, and parts of Europe. For eight months workers hurriedly built a tomb of steel and concrete to contain the radioactive remains.

The sarcophagus, however, was only designed to last 30 years — until 2016. Weakened walls have been reinforced and holes have been patched but some radioactive dust and radiation could still leak from the aging structure. To reduce that risk, engineers and construction workers are finishing a mammoth, stainless steel edifice—the largest moveable structure ever built—that will slide over the old sarcophagus and encase it for a century.

The structure itself is largely finished, but as the 30th anniversary of the accident fast approaches, about a year of work remains on ventilation systems, electrical systems and testing before the dome can be slowly slid into place and locked down (see the video below).

Worry about the crumbling sarcophagus is compounded by a plan to turn the land around the site into a national park. Immediately after the accident the Soviet Union cordoned off the Chernobyl Exclusion Zone, an area with a 30-kilometer (18-mile) radius around the reactor complex.

Access by people was severely restricted. Nuclear waste storage facilities have since been built on the site and today around 6,000 workers come here daily. The rest of the zone is pretty much devoid of humans, however, other than the occasional poacher, biologist or journalist like myself.

Ukrainian Pres. Petro Poroshenko announced the controversial plan for a proposed park only a few months ago. Ironically, researchers worry that a “biosphere preserve” would make rebounding animal populations less safe, both because a nuclear disaster site is more stringently regulated than a national park would be and the plan would allow more industrial development — a seeming contradiction with a park.

Warning signs hand-painted with red and yellow radiation symbols tilt haphazardly at the roadside as I approach the Chernobyl site with an official escort to see the lay of the land. The shinning New Safe Confinement arch and the rusty sarcophagus, rise in the distance. Behind them, the towers and power lines of Chernobyl’s unused electricity grid stretch to the horizon. 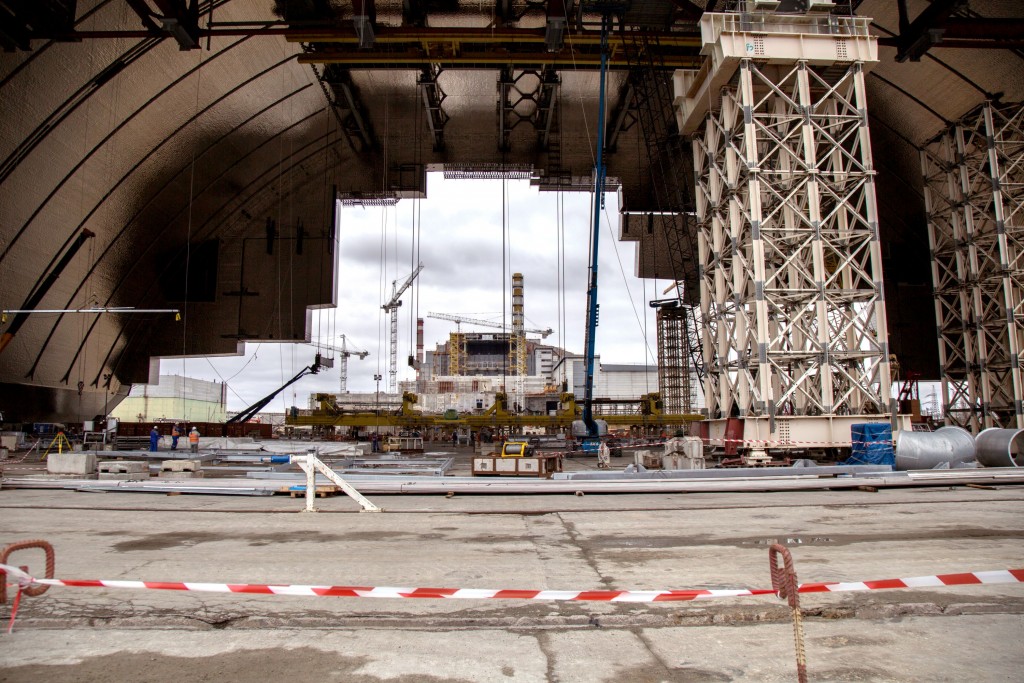 The New Safe Confinement arch is the largest moveable object ever built on land. It is roughly 118 yards tall (higher than the Statue of Liberty), 177 yards long and 281 yards across its base—more than two football fields. Photo by John Wendle

If the embattled Ukrainian government in Kiev has its way, those cables may someday have electricity running through them again, although never generated by nuclear fission.

“It’s possible for us to install a solar station because we have all these electricity lines,” says Hanna Vronska, acting minister of Ukraine’s Ministry of Ecology and Natural Resources, during an interview at her sparse offices in Kiev. “And of course, she says, “we could use this zone for storage of nuclear waste”—possibly from other countries, “because people will never be allowed to live there.”

Vronska, a U.S.-educated lawyer, says she did not even want the job, which was given to her after her predecessor was accused of embezzling $21.5 million and sacked. She says the government would like to “combine the industrial usage of this zone with some kind of nature protection activity.” The presidential decree, if signed, would change the status of the area from a “zone of alienation” polluted by radiation to that of a specially protected nature preserve.

The odd arrangement could allow expansion of nuclear waste confinement and storage facilities already completed in an inner area close to the new arch. The wildlife preserve would fill the outer ring of the zone, including forests, fields, marshes and abandoned villages. The decree was scheduled to be signed in the coming months but it is unclear if and when that might happen due to rising controversy as well as government turmoil.

Establishing the nature park is “really a difficult question and we are having strong talks about it,” says Maryna Shkvyria, a wolf expert at the Ukrainian National Academy of Sciences’ Institute of Zoology who has studied wolves in the zone for years. “Personally, I’m not sure that a biosphere preserve will be better” than the current arrangement. 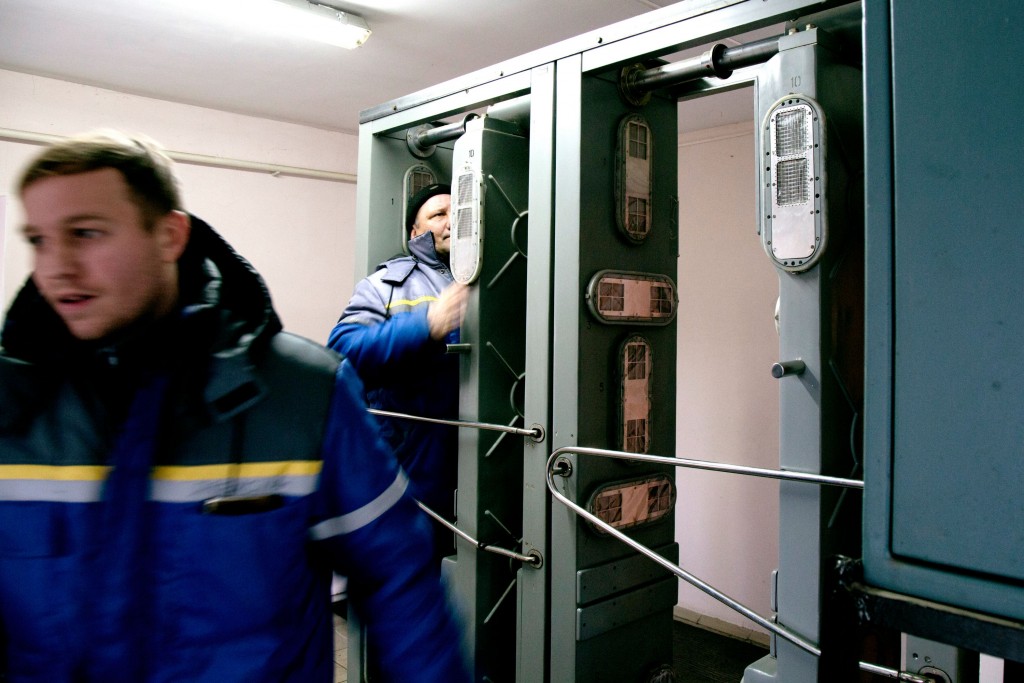 Workers are checked by sensors for traces of radiation on their hands and clothing as they leave the Chernobyl Exclusion Zone. Photo by John Wendle

Whether a preserve is a good idea is hard to answer because most facts about the 1,000-square-mile exclusion zone are disputed. Levels of radiation vary throughout the zone, with an area of higher radiation stretching away in a plume of fallout to the west, which followed the weather pattern during and soon after the disaster.

Biologists from all over the world are divided on whether there has been an enormousrebound of wildlife or not, with sometimes bitter debates bubbling up over everything from the methodology of animal tracking to how useful certain species are as predictors of radiation hazards. The only thing researchers agree on is that more analysis needs to be done, especially about the effects on large mammals of low daily levels of ionizing radiation, absorbed from both their surroundings and food that has grown in the zone. Government bureaucracy in Ukraine and Belarus has partially caused the gaps in research.

At the same time, the Exclusion Zone is a forbidden lure to Ukrainians and Belarusans. It is widely known that illegal logging goes on there, an activity of international importance, because wood harvested inside the confines and shipped elsewhere spews isotopes into the atmosphere when it is burned, spreading old radiation anew. Also, illegal fishing and the collecting of wild berries and mushrooms, a very popular activity in Slavic countries, are widely practiced, even though radiation in the soil remains high.

Poaching is also a big problem; wealthy hunters pay top dollar to hunt everything from moose to wolves in the restricted area, locals say, even as impoverished villagers hunt to put food on their tables. Poverty also forces people to do things like scavenge for scrap metal. Earlier in April a local man was arrested for hauling out more than a hundred kilograms (220 pounds) of radioactive rebar from an abandoned farm in the zone, an indication of the level of desperation caused by poverty.

“Unfortunately we cannot control all such cases,” Vronska says. “At the moment we don’t have sufficient financial support from the state budget” to increase surveillance and patrols. “But we hope that the biosphere preserve will be established so that we can attract additional financial support, including international donors, just to have good teams of rangers to protect this area from any interference.”

It remains unclear whether a new status for the Chernobyl Exclusion Zone would provide that or if the weaker legal restrictions for a national park would just make the territory more vulnerable to the poaching, illegal logging and corruption that plague wildlife and endanger the lives of local residents. Right now, Shkvyria says, “we have only hope.”

This article is reproduced with permission from Scientific American. It was first published on April 21, 2016. Find the original story here.

Left: Ukrainian workers are completing a New Safe Confinement arch (left) that will slide over and encase the exploded Chernobyl reactor No. 4 (right) and seal it for 100 years. Photo by John Wendle