After additional marathon hearings on President Trump’s Supreme Court nominee, the Senate Judiciary Committee voted along party lines on Monday in favor of Judge Neil Gorsuch. The same day, Democrats announced they had enough votes to block Gorsuch’s nomination in the Senate.

Of course, Majority Leader Mitch McConnell has said Republicans would resort to the “nuclear option” to get Gorsuch confirmed in the Senate.

The past week was also punctuated with the re-emergence of Hillary Clinton, after her “long walks in the woods.” And before the latest chapter in the Russian investigation threatens to wrestle control of the 24-hour news cycle, here are five important stories that may not have shown up in your Facebook feed. 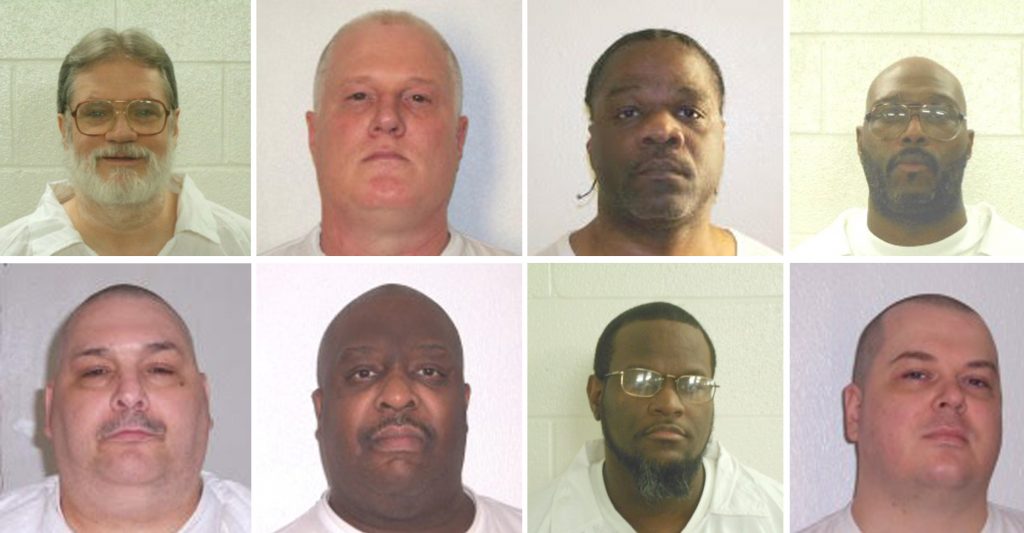 The last time Arkansas executed anyone was 2005. In two weeks, the state plans to execute eight men in 11 days.

The first two men are scheduled to die April 17, the day after Easter Sunday. Arkansas plans to lethally inject two prisoners every day on April 20, April 24 and April 27. The state sees no reason to deviate from those dates, said Judd Deere, spokesman for Arkansas Attorney General Leslie Rutledge in a written statement.

“Attorney General Rutledge supports the death penalty and believes it is past time for the victims’ families to see justice for the horrible murders of their loved ones,” he said.“This office is prepared to respond to any and all challenges that might occur between now and the execution dates.”

The executions are happening now because the state’s supply of lethal injection drugs will soon expire.

Why it’s important
Public support for the death penalty has dropped nationwide for four decades, and in 2016, a Pew Research Center survey found that only half of Americans favor capital punishment. Robert Dunham of the Death Penalty Information Center says no one state has executed so many people in such quick succession since the Supreme Court reinstated capital punishment in 1976.

Managing eight executions in less than two weeks could traumatize people who conduct the procedures, critics warn. “Prison personnel are people, and they have to live with what they’re doing.” Dunham said. And the large number of executions also raises the risk of something going wrong. 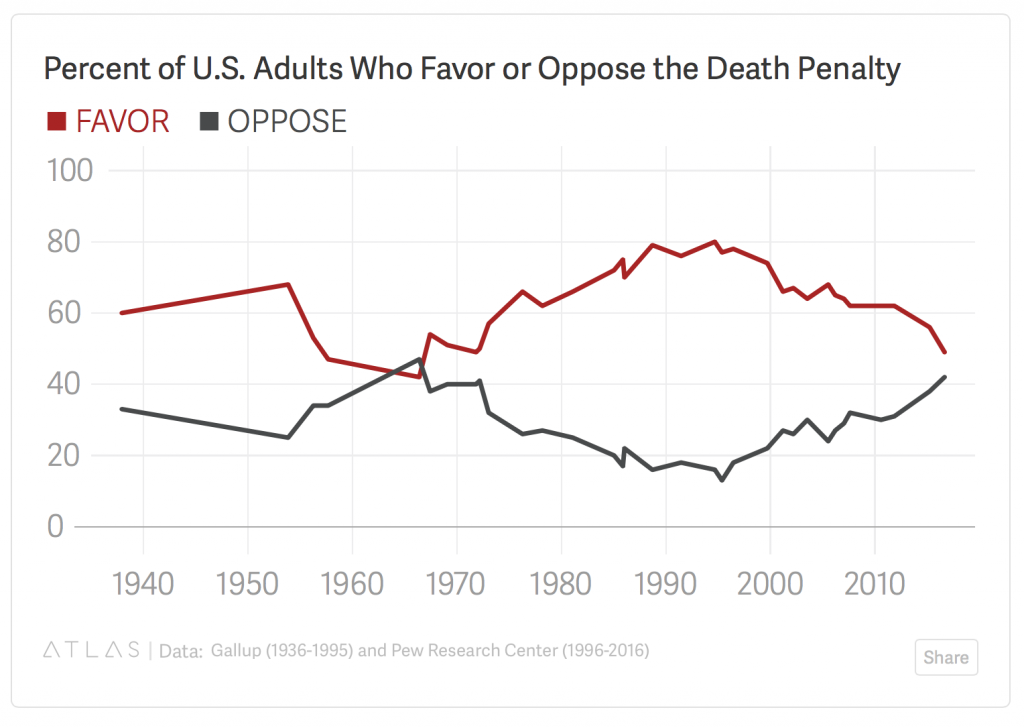 Essie Mae Cableton is the mayor of Gould, Arkansas, a small town of more than 800 residents that’s also the home of death row for the Department of Corrections—that’s where this month’s executions will take place. Cableton told the NewsHour she doesn’t agree with the death penalty. When asked if executions might traumatize prison personnel who live in her town, Cableton said it was “a possibility,” but added that families of victims killed by the eight men sitting on death row were traumatized, too. But she said the justice system is not blind.

“Justice has to be carried out,” she said. “I just wish it was more fair.”

2. The comalike condition that takes hold of refugee children 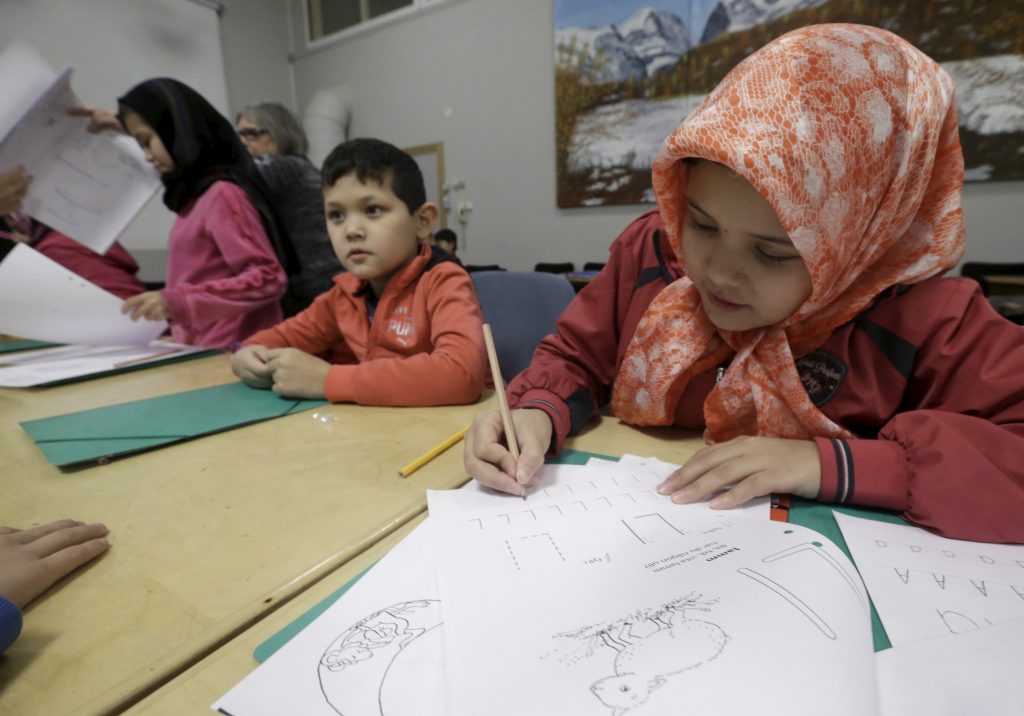 Refugee children attend class in a camp at a hotel touted as the world’s most northerly ski resort in Riksgransen, Sweden. Picture taken in 2015. Photo by Ints Kalnins/Reuters

A strange condition affects refugee children, but only in Sweden. Rachel Aviv of the New Yorker profiled several refugee families whose children have slipped into resignation syndrome, or uppgivenhetssyndrom, a disorder that’s described as losing the will to live.

The illness has only been documented in Sweden, a country that has extended considerable humanitarian aid to refugees for decades, but that also faces an internal debate or how many refugees to accept. The condition most often appears in children after they’re told their families are denied asylum.

One doctor told Aviv that the typical patient was “totally passive, immobile, lacks tonus, withdrawn, mute, unable to eat and drink, incontinent and not reacting to physical stimuli or pain.”

It’s a condition that’s been documented since the early 2000s among refugee children who were from former Soviet states. By 2005, more than 400 children between the ages of 8 and 15, had been diagnosed with the syndrome, Aviv reported.

One of the children Aviv profiled, Georgi from the Russian province of North Ossetia, was in that comalike state for months until his family was finally granted permanent residence. Georgi didn’t react immediately, but two weeks after the initial news, he began to open his eyes and slowly, he regained certain abilities. It takes months to recuperate from the syndrome. 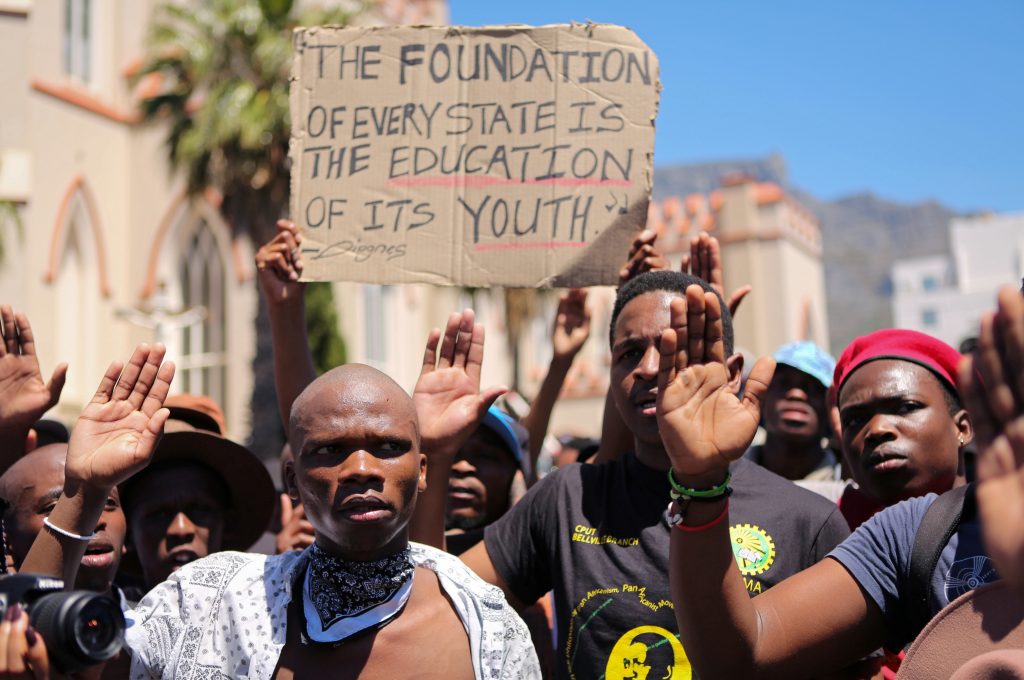 In an interview with NPR, Aviv was asked whether the children could have known about the syndrome. Did they fall into the condition to help their families’ chances for permanent residence in Sweden’s asylum process?

“I think everyone acknowledges that there’s a degree of psychological contagion,” Aviv said, adding that Georgi knew someone else with the condition. “It’s a little like the way anorexia emerged in the U.S. at a moment in time when people were preoccupied with body image and the media were emphasizing thinness. The illness borrows from the culture, and suddenly you have all these people who are starving themselves and doctors began diagnosing anorexia,” she said.

Aviv said it was difficult to know exactly what causes the condition, but it “seems to have become a culturally permissible way of expressing one’s despair,” she added. 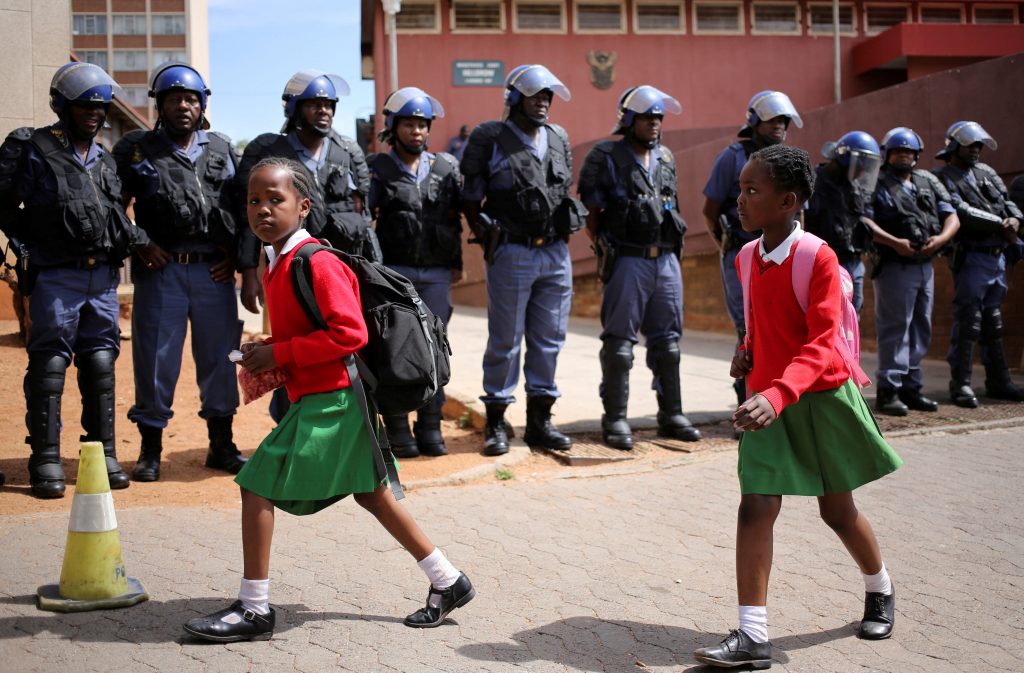 School girls walk past riot police standing guard outside Hillbrow magistrate court during an appearance of students who were arrested during a protest demanding free education at the Johannesburg’s University of the Witwatersrand, South Africa. Photo taken in October 2016. Photo by Siphiwe Sibeko/Reuters

It’s been more than two decades since apartheid, a political system that instituted racial segregation, ended in South Africa. But an enormous divide still exists in the nation’s higher education system. While the number of students at South African universities has more than doubled since the end of apartheid, only 17 percent of black students enroll in universities, compared to 47 percent of whites, Buzzfeed reports.

South Africa’s black youth are still grappling with questions of place, identity and access when it comes to higher education.

The education disparity has manifested in several months of protests across campuses in South Africa. A protest at the University of Cape Town over a statue of British imperialist Cecil John Rhodes became a moment called “Rhodes Must Fall.” This campaign then sparked another movement to protest the annual increase in tuition — roughly 12 percent — in fall 2015. This time it was called “Fees Must Fall.”

Adam Habib, president of the University of the Witwatersrand in South Africa, told The Atlantic, the education issue has global resonance.

“South Africa is not unique. It’s just the most acute manifestation of a global conflict that’s emerging,” Habib said. “We’re simply the example of what is to come in other countries unless something is done.” 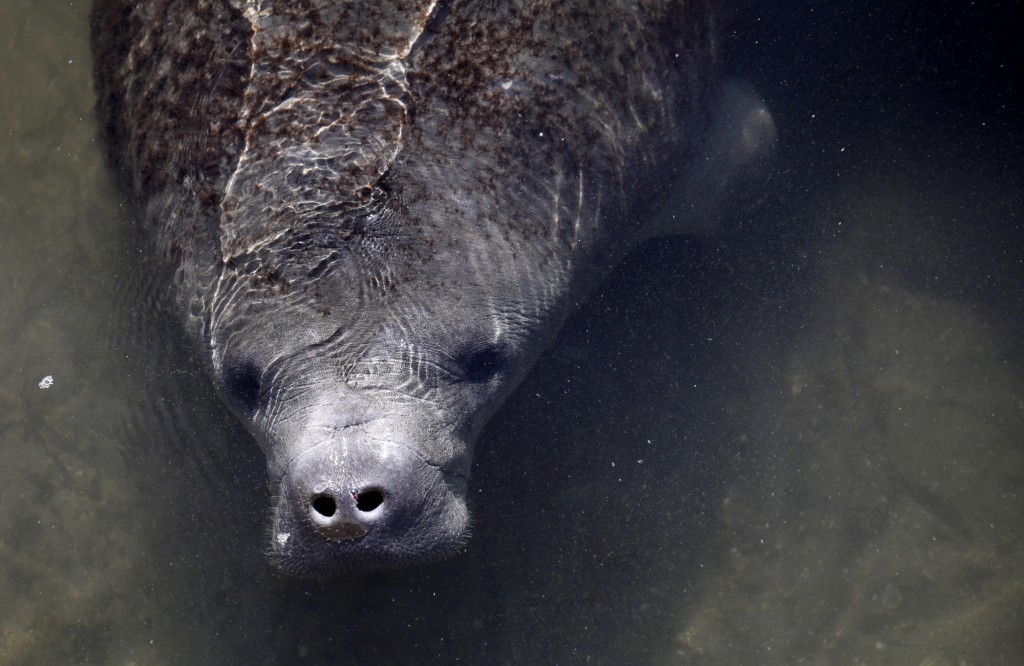 A manatee is seen nearby an inactive power plant in Riviera Beach, Florida, in 2010. Photo by Carlos Barria/Reuters

If you missed Manatee Appreciation Day, don’t worry. There’s cause to celebrate again:
The West Indian manatee is no longer considered an endangered species.

The animals affectionately dubbed “sea cows,” who swim along the shallow coastal waters of Florida and the Caribbean basin, were downlisted to “threatened” under the Endangered Species Act last week. What was once a population of a few hundred in the 1970s has today soared to more than 6,620 manatees in Florida alone, U.S. Fish and Wildlife Services said in a statement.

Along with the promising swell in population, FWS says a number of programs from the Interior Department, the Florida Fish and Wildlife Conservation Commission (FWC) and local communities have helped stabilize manatees’ environment, including partnerships with the U.S. Coast Guard to reduce boat collisions and a focus on retrofitting water control devices, fishing gear cleanup and rehabilitation and rescue programs. 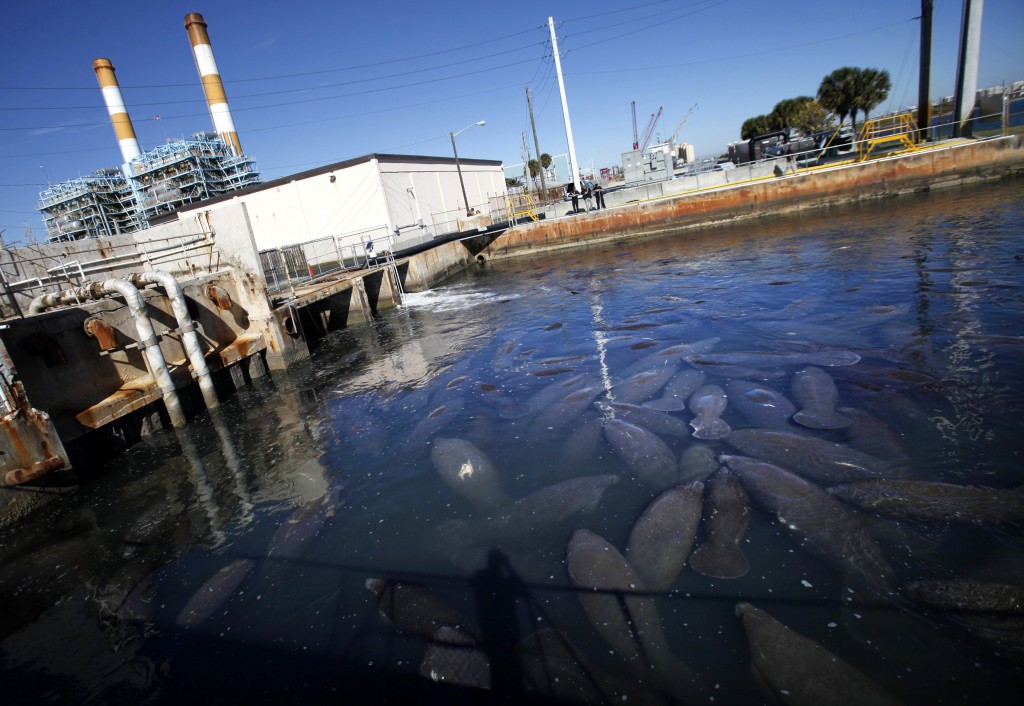 While other endangered marine animals, like the vaquita, are close to disappearing forever, the manatee revival is a sign that intervention and partnerships between the government and animal groups can actually work.

Before you start rejoicing, though, the manatee isn’t totally in the clear. The FWS says it must continue to improve programs to sustain the current surge in population; manatees will also continued to be protected under the Marine Mammal Protection Act.

Not everyone thinks that’s enough.

Environmental groups began protesting the decision when officials first considered it last year. Their argument: the government is looking at how many animals are alive, but isn’t looking closely enough at how many manatees are being killed, and why.

Officials have pointed to three straight years of manatee populations above 6,000. But “success should not be determined by ‘how many manatees exist,’ but by how well actions keep the gentle sea cows from harm,” advocates told the Miami Herald.

The Save the Manatee Club told CNN that the government should update its manatee recovery plan. And with a record number of manatees killed by boats in Florida last year, the Center for Biological Diversity says there needs to be a greater emphasis on enforcement and education.

On the latter point: here are eight things you probably didn’t know about manatees. 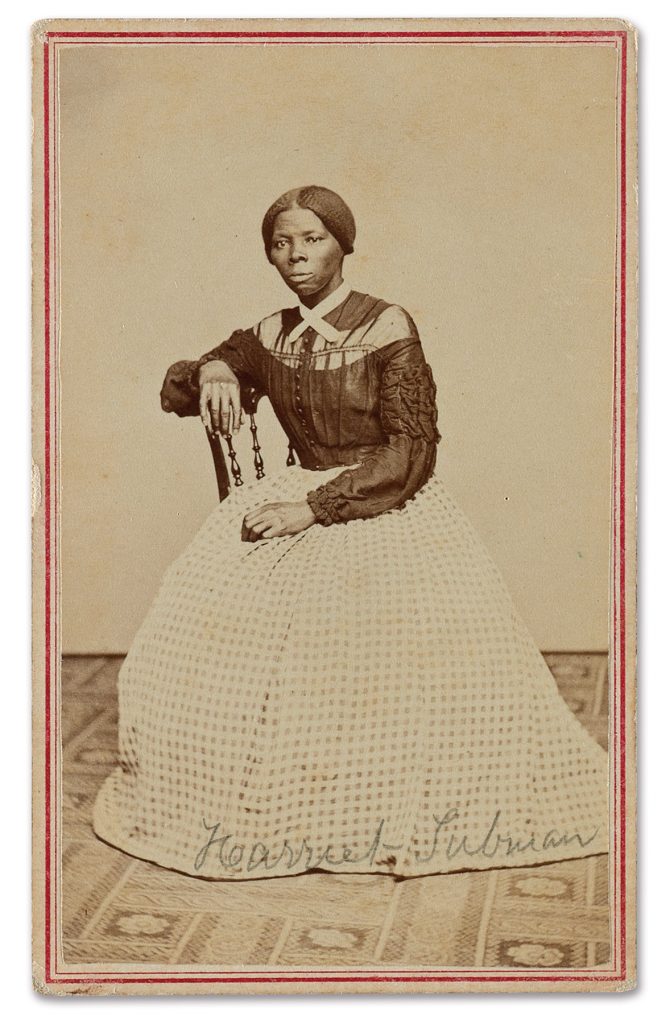 Harriet Tubman, circa 1860s, from the photo album of Emily Howland (1827–1929), a Quaker school teacher, recently acquired by the Smithsonian National Museum of African American History and Culture and the Library of Congress. Images provided by LOC/NMAAHC

Late last week, a rare image of Harriet Tubman, conductor of the Underground Railroad, emerged. It was included among 43 other previously unrecorded images from an old photo album belonging to a Quaker school teacher.

The Library of Congress and the Smithsonian’s National Museum of African American History and Culture jointly acquired the album for $130,000 at a New York auction.

The image shows a seated Tubman, who’s also younger than she’s commonly remembered in photos later in life. In March, PBS NewsHour Weekend’s Megan Thompson reported on the new national park created in Auburn, New York, where the abolitionist spent the last 50 years of her life.

After Harriet Tubman, famed conductor of the Underground Railroad, rescued dozens of people from slavery and served in the Civil War, she settled down in the small city of Auburn in upstate New York and continued a life of service. The National Park Service recently made her property a national park, celebrating the later chapters of her life. NewsHour Weekend’s Megan Thompson reports.

A sister, 17-acre national park focusing on Tubman’s involvement in the Underground Railroad also opened in March in Church Creek, Maryland, where she initially escaped slavery in 1849.

Among the collection of photos was the first known photograph of the first African American man elected to U.S. Congress. Until then, images of John Willis Menard were relegated to sketches. 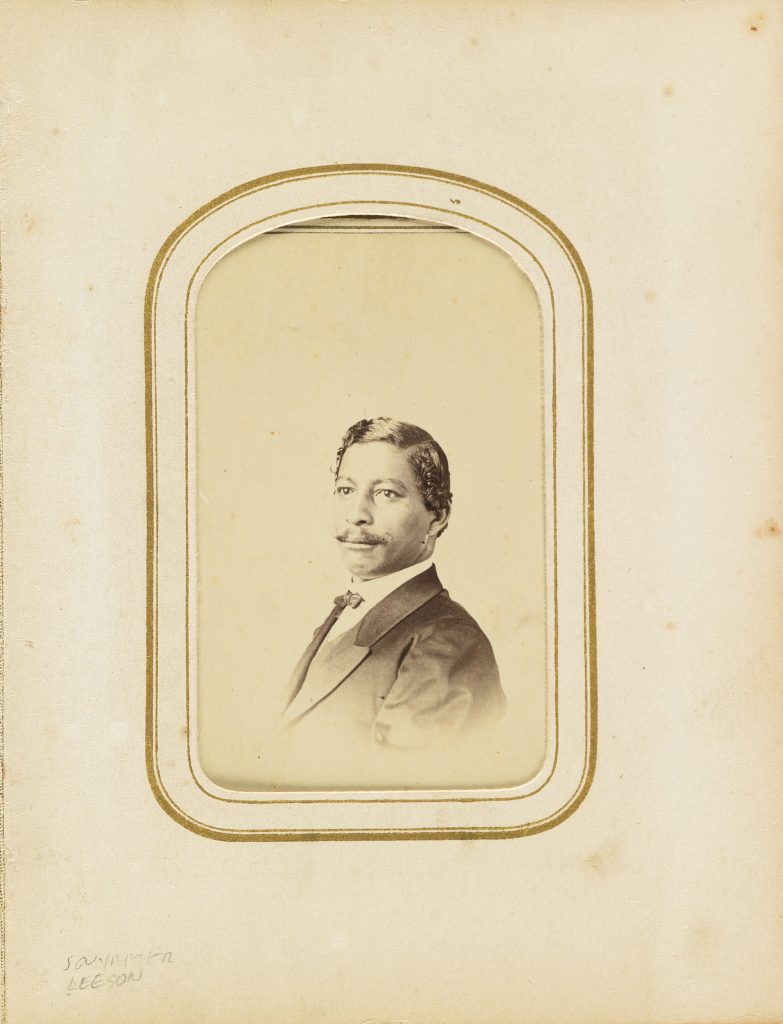 Born in Kaskaskia, Illinois, on April 3, Menard would go on to win the Republican nomination for Louisiana’s 2nd congressional district in 1868. However, his seat was contested by his opponent. Menard was given the opportunity to address the U.S. House of Representatives. He was the first African American in history to do so.

“I would feel myself recreant to the duty imposed upon me if I did not defend their rights on this floor,” Menard told the House. “I wish it to be well understood, before I go further that in the disposition of this case I do not expect, nor do I ask, that there shall be any favor shown me on account of my race, or the former condition of that race. I wish the case to be decided on its own merits and nothing else,” he added.

After Menard made his case, Congress decided to not seat him.

The following year, however, Joseph Rainey of South Carolina would become the first African American to seat in the House for the 41st Congress.