5 important stories that are not about the health care vote

As a candidate, President Donald Trump promised to “drain” what he saw as “the swamp” of insiders in Washington, D.C. But in the past week, the shake ups have come from inside the White House itself.

Press Secretary Sean Spicer resigned after Anthony Scaramucci, once a Trump critic, was tapped as the new communications director. Meanwhile, internal conflict brewed within President Donald Trump’s legal team. The Hill reported Secretary of State Rex Tillerson was considering an early exit. And the president continued his tweeted thread of criticism against his own “beleaguered” attorney general. (Scaramucci says a resolution will be reached “soon.”)

While we wait to see what happens next, here are five important stories you may have missed in the White House turmoil.

1. The details of the BBC’s gender wage gap are revealed 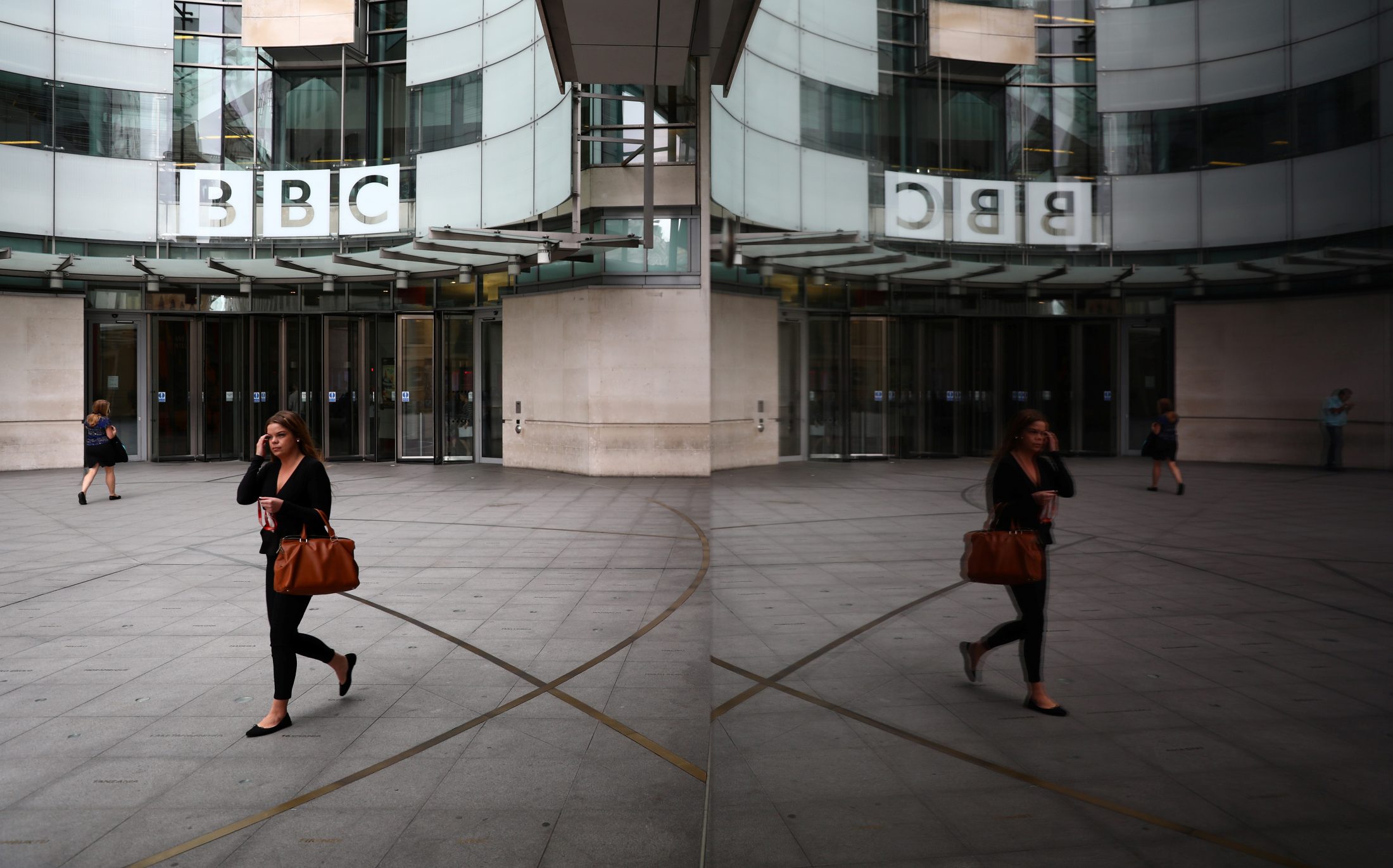 A woman is reflected as she passes the BBC’s Broadcasting House in London, Britain. Photo by Neil Hall/Reuters

Last week, the British government ordered the BBC to reveal the salaries of its top-tiered talent.

The organization’s annual report showed a significant pay gap between the public broadcasting network’s top entertainers and journalists and its female and minority staff. Nearly 100 of these stars, attached to talent contracts, earned above £150,000, or more than $195,000. Two-thirds of those who met that salary threshold were white males.

Per the public disclosure, Radio 2 host Chris Evans was the highest paid, making between £2.2 million and £2.25 million. For contrast, the highest paid female last year was Claudia Winkleman who made between £450,000 and £500,000. The highest paid minorities were George Alagiah, Jason Mohammad and Trevor Nelson, all of whom earned between £250,000 and £300,000.

After the salaries were revealed, 42 of BBC’s female broadcasters penned an open letter to director general Tony Hall, calling for immediate action to bridge the wage gap.

The report “showed what many of us have suspected for many years,” the letter read, “that women at the BBC are being paid less than men for the same work.”

The letter continued: “You have said that you will ‘sort’ the gender pay gap by 2020, but the BBC has known about the pay disparity for years. We all want to go on the record to call upon you to act now.”

The women ask Hall to meet with them to discuss on how to proceed on the matter.

The BBC’s wage disclosure demonstrated that the gender pay gap doesn’t just exist in the U.S.

The fact is, however, that a gap remains.

Part of the reason why a gap persists is because women have more career disruptions that have long-term impacts on their salaries, Pew reported. The disruptions were often to care for a child or family member.

2. A new report by Amnesty International calls the Mosul campaign a “civilian catastrophe” 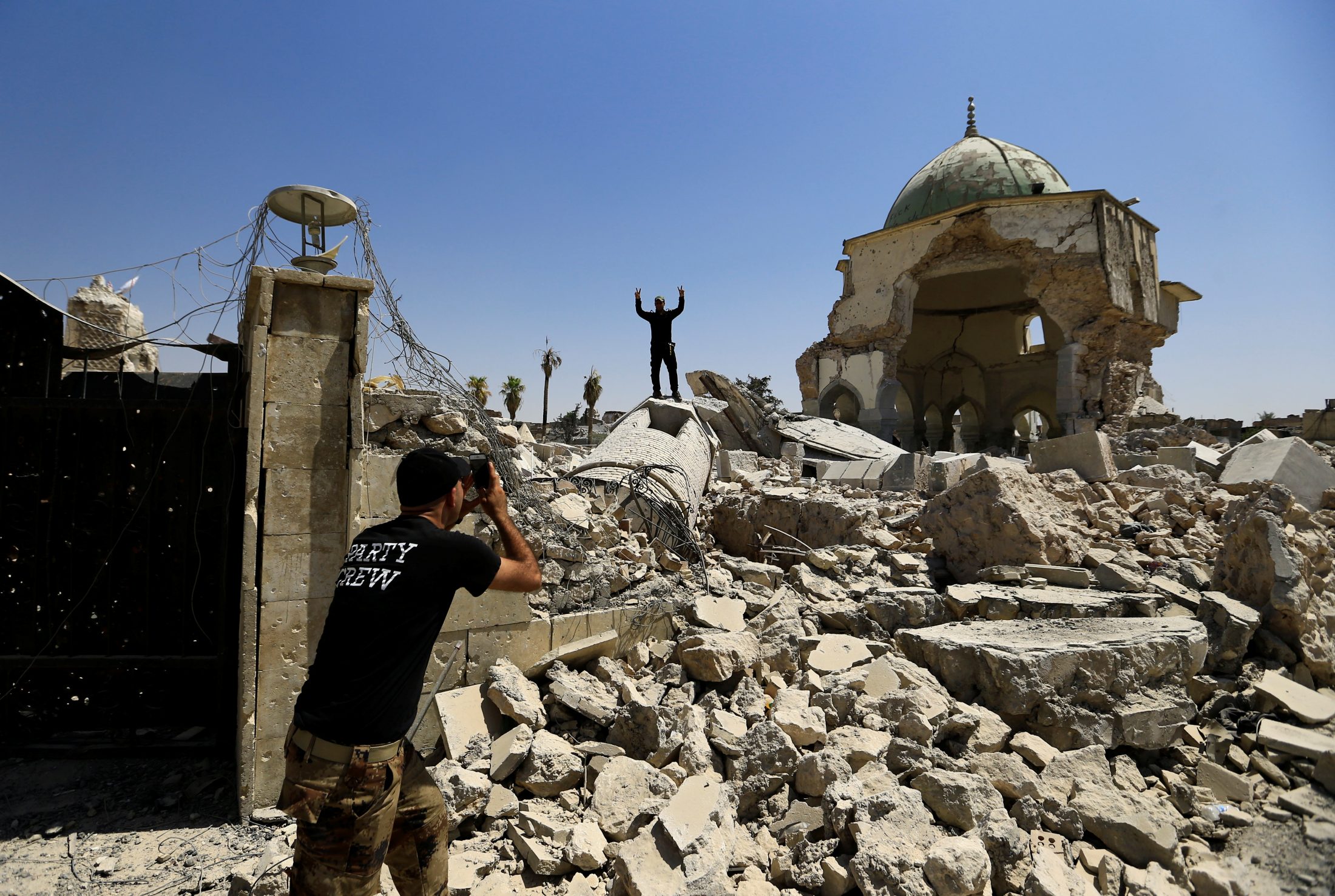 Members of the Counter Terrorism Service (CTS) take a selfie in front of the ruins of Grand al-Nuri Mosque in the Old City of Mosul, Iraq. Photo by Thaier Al-Sudani/Reuters

The months-long campaign to retake Mosul has “caused a civilian catastrophe,” Amnesty International said in a report released last week.

There have been reports about the bloody tactics Islamic State militants use on civilians in Mosul — including mass killings and using them as human shields — ever since the group took control of the Iraqi city in 2014 and declared a so-called caliphate.

But Amnesty also said Iraqi civilians faced “relentless and unlawful attacks” from Iraqi forces as the U.S.-led coalition worked to seize the city from ISIS control. Amnesty’s report was built upon March and May 2017 interviews with more than 150 Mosul residents, including those who fled the violence in the city.

The coalition, however, rebuked the report, calling it “irresponsible.”

“War is not pleasant, and pretending that it should be is foolish and places the lives of civilians and soldiers alike at risk,” coalition spokesman Col. Joe Scrocca told The Associated Press.

Iraq declared victory in the battle for Mosul last week, signaling a possible close to the nine-month military campaign. However, this doesn’t mean that the fight against ISIS is over, Stephen Kalin of Reuters told the NewsHour.

Stephen Kalin, a reporter for Reuters, talks to Hari Sreenivasan from Mosul about the fight to free the city.

For one: Mosul is in ruins. Iraq’s second-largest city must now move forward with reconstruction, the initial stages of which will take about a year and cost more than $1 billion, the United Nations told Kalin.

3. More than half of female homicide victims are killed by an intimate partner

In 2015, 3,519 girls and women in the United States were victims of homicide. More than half of of them were killed by an intimate partner.

A report from the CDC last week said that domestic violence is one of the leading causes of death for women in America, especially for those younger than 44.

The report examined 10,000 homicides over nearly a decade, offering the closest look yet at deaths from intimate partner violence in the U.S.

Among the study’s other findings:

Worldwide, 38 percent of female homicide victims are killed by an intimate partner, the World Health Organization says. Before now, research indicated that the U.S. fell in line with that number, at around 40 percent.

The latest report not only suggests a much larger problem, but also pinpoints more precisely who is targeted, and how. It dispels an earlier, oft-repeated myth that strangers are behind these killings. Strangers were responsible for just 16 percent of these homicides, The Atlantic points out.

Where do we go from here? Bystanders need better training in spotting and preventing violent domestic encounters (the CDC points to the Green Dot program); doctors and first responders could do a better job screening, too.

The CDC also places some blame on the ease with which some perpetrators can access guns.

4. Cleveland’s stadium and other infrastructures could contain the same paneling responsible for June’s severe London fire

The Browns’ football stadium in Cleveland is one many buildings nationwide that could contain the same panelling that devastated London’s Grenfell Tower apartments, the Associated Press reported last week.

The 24-story Grenfell Tower apartment building — where a fire killed at least 80 people in June — used paneling known to be combustible and not recommended for installation on dramatically high buildings. Robert Solomon, an engineer with the National Fire Protection Association, told the AP that U.S.-constructed Arconic panels did not undergo code inspection tests.

Cleveland’s chief building official, Thomas Vanover, confirmed during a news conference July 20 that the panels on the football stadium are “similar if not identical” to the same panels that devastated London’s Grenfell apartments after catching fire, Cleveland.com reported.

The material that covers the panels, a Reynobond composite with a polyethylene core and manufactured by Arconic Inc., covers roughly 100,000 square feet of the stadium’s exterior.

Other buildings that may also contain the material include a 33-story luxury hotel along Baltimore’s Inner Harbor, an Alaskan high school and a Dallas airport, Sports Illustrated reported.

Tania Baker, Baltimore City Housing Authority spokeswoman said that despite having the panels, the Charm City structure — the Harbor Marriott Hotel — would have been compliant with local fire codes because the hotel also has sprinklers. (The London apartment building did not).

“We can tell you that the hotel passed building inspection at the time it opened in 2001 and that the hotel’s fire and life safety systems meet local code requirements,” Marriott’s spokesman Jeff Flaherty added.

It is unclear whether the buildings highlighted by the AP report actually used the material in question because structure records are incomplete. None of the buildings have been deemed hazardous, AP reported, nor has the U.S. government issued a widespread testing of the aluminum paneling.

British authorities, along with Arconic, are still seeking answers as to what caused the destruction.

But the AP’s report raises another issue: safety regulations differ from place to place, which can make it harder to assess risk.

Under the “principles-based” approach used by the U.K., companies operate based on common understanding of risks and available technology, Fortune reported. The U.S. follows a more specific “rules-based” approach that establishes stricter regulations, but even then, cities and states have the power to set their own rules.

More than 1,300 years ago, the ancestors of modern Englishmen tore their way through Kielder Forest, wiping out every last British lynx from the remote area along the Scottish-English border.

Now, a group of conservationists are trying to bring the animals back.

The Lynx UK Trust submitted an application last week to reintroduce six lynx to the forest, part of a broader project to fulfill what they call their “moral obligation” to return the animals to their natural habitat. A decision is expected in the next few weeks.

The trust says the reintroduction of the lynx would be a boost to tourism, and also help control the forest’s roe deer population, which has become unsustainable without a predator like the lynx.

If their application is approved, the trust says it will trap lynx in the wild (from the Carpathian mountains and other places in Eastern Europe) and soft-release them in the UK with satellite collars to track their movements.

Not everyone’s excited about the return of the cats to the forest, though, the Washington Post reports — namely, those who own sheep; farmers fear their herds will be totally wiped out by lynx hungry for prey.

“When I first heard about it, I thought, ‘This must be the craziest idea anyone’s ever had,’” Dennis Salt, a local herder, told the Post.

For conservationists, Griff Witte writes in the Post, the return of the lynx would be a “potent symbol, amid fears of an unstoppable mass extinction of species worldwide, that the tide can still be turned.”

But the community surrounding the remote far reaches of England, like others who have considered reintroducing a long ago species, is “torn between the lure of restoring a vital element of the British countryside as it existed long before sheep held sway, and the fear that doing so could jeopardize livelihoods.”

In the 1990s, wolves were reintroduced into Yellowstone National Park, 70 years after they disappeared, to manage a growing elk population. The program was controversial, but in many ways helped to introduce wolves elsewhere.

There are plenty of other success stories around the U.S., as detailed here by the National Parks Conservation Association. (Who knew that Pacific fishers could take down rampant porcupines?)

It hasn’t always turned out that way. The red kite, a bird of prey in the same family as eagles and buzzards, had been extinct in the UK decades before it was reintroduced in the 1990s. In 2011, they were so dominant they were threatening other species like songbirds, Dr. Lewis Thomas told the Guardian at the time.

The Veterinary Association for Wildlife Management, a group for which Thomas serves as secretary, released a report in 2011 that refers to the reintroduction of species, including the beaver and the lynx, as “potential man-made threats to biodiversity.”

“Supporters of these projects talk about so-called ‘controlled’ reintroductions, but you can’t control things like the beaver or the wolf,” Thomas told the newspaper.