5 important stories you missed while the government was shut down

1. A preliminary report over the Las Vegas shooting reveals more information about the gunman — but still no motive. 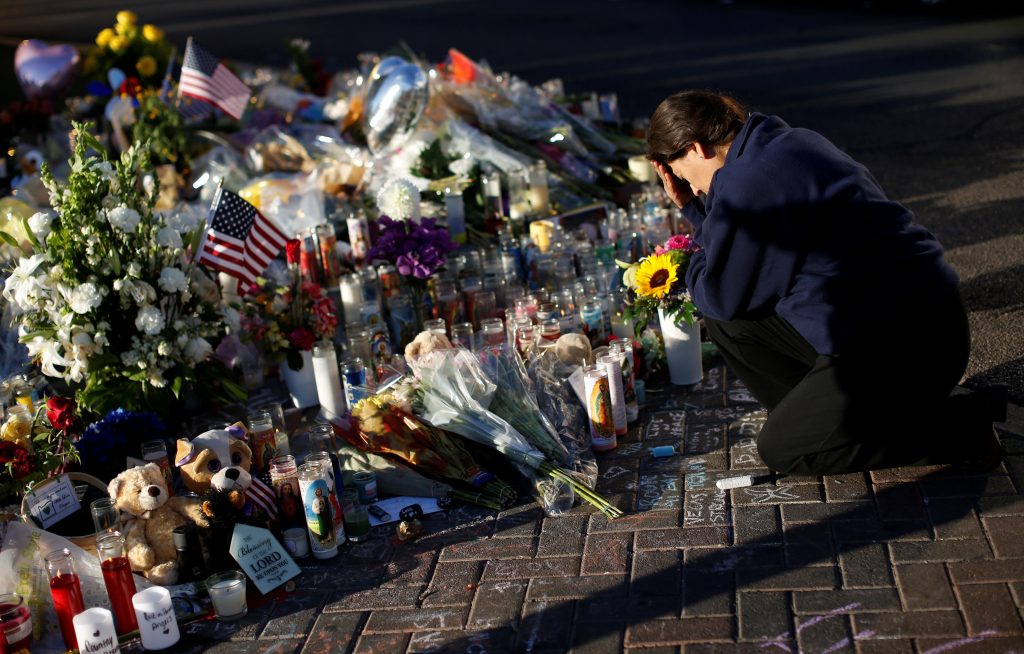 A woman pauses at a makeshift memorial in the middle of Las Vegas Boulevard following the mass shooting in Las Vegas last October. Photo by Reuters.

After three months of investigation, Las Vegas officials released an 81-page preliminary report Friday that laid out a minute-to-minute timeline of how Stephen Paddock orchestrated his Oct. 1 attack at an open-air concert along the strip.

Paddock opened fire that evening from a Las Vegas hotel room overlooking the 20,000-person event, killing 58 people and injuring more than 700 before killing himself in what’s considered the deadliest U.S. mass shooting in modern history. The report uncovers how the 64-year-old man, known as a gambler and germaphobe, carried out his attack in a heavily populated public space.

The report includes new details about Paddock’s financial situation, how he acted alone, and how he planned his attack, including a look at his various Google searches. Read the full report here, or look at the Twitter thread below for a quick outline of what investigators found:

Las Vegas police released a preliminary report over the Oct. 1, 2017, shooting that killed 58 people. The gunman, Stephen Paddock, opened fire on 22,000 fans at an open-air concert from a hotel window above. Here's the report: https://t.co/DA8aYBTLaL pic.twitter.com/TCa8BVbK7l

Why it matters: In the report, there are (graphic) photos of the hotel room, littered with many weapons legally purchased for the planned shooting. There are images that show how several surveillance cameras were affixed to allow Paddock to see who may have been coming for him down the hall.

However, one big question remains unanswered in the report: a motive.

Police are still in search of a motive. The report said no manifesto or suicide note was found at the Mandalay Bay hotel. Nor could investigators link Paddock to any radicalization or specific ideology. pic.twitter.com/0ID1rAEey0

“This report is not going to answer every question, or even answer the biggest question as to why he did what he did,” Clark County Sheriff Joseph Lombardo told reporters last week.

Will investigators get a clear picture of his motive? It’s too early to say. A final report is expected sometime later this year.

2. A massive spill in the East China Sea could be nearly impossible to clean up 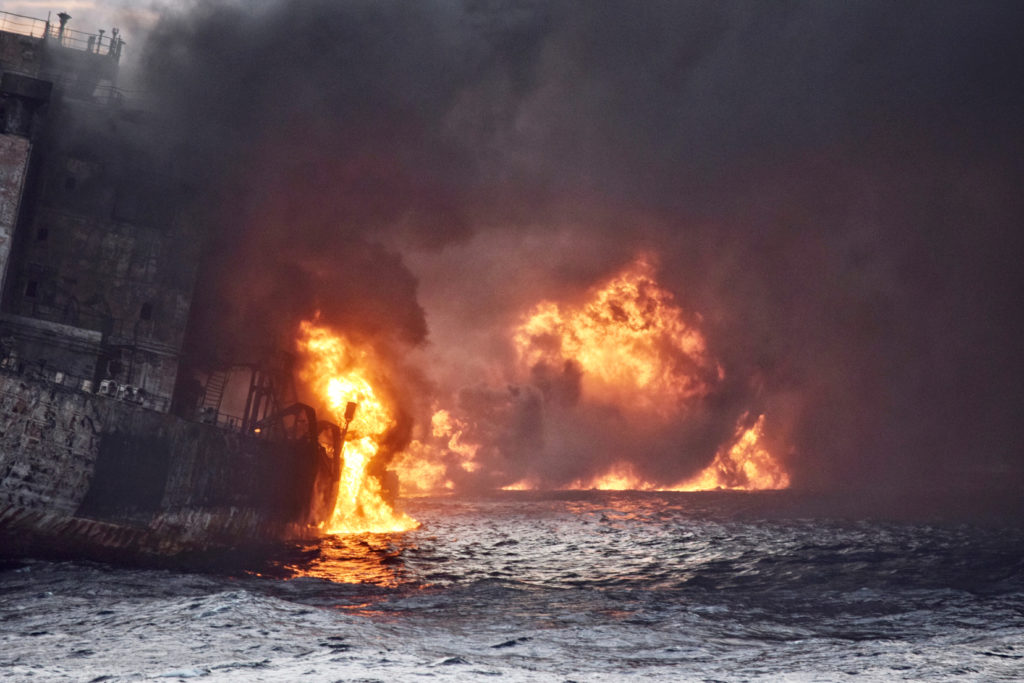 Iranian oil tanker Sanchi is seen engulfed in fire in the East China Sea, in this Jan. 13, 2018, picture provided by Shanghai Maritime Search and Rescue Centre and released by China Daily. Photo by China Daily via REUTERS

An oil slick in the East China Sea is now 39 square miles, or about the size of Paris, and is possibly growing larger still.

How does that happen? On Jan. 6, a Chinese freighter collided with an Iranian oil tanker. All 32 people on board the tanker are now presumed dead (though everyone from the freighter survived). Since then, the freighter has been leaking the heavy diesel that powers the ship, and possibly also the oil it was carrying. That oil, called condensate, is light and water soluble. After a week on fire, the ship finally sank on Jan. 14, meaning most of the evidence of the crash, as well as the oil, is now at the bottom of the ocean. [Associated Press]

Why it matters: Because condensate is odorless, colorless, and dissolves partially in water, it will be difficult to clean up. Condensate does burn quickly, so if any leaked, some of it likely burned off in the fire. But the oil that didn’t burn, or oil that may be still leaking from the sunken ship, would be very difficult to remove. The tanker was carrying nearly 42 million gallons of condensate; by comparison, in 1989 the Exxon Valdez spilled 10.8 million gallons of heavy crude oil off the coast of Alaska, VICE points out. The environmental impact is difficult to predict because there haven’t been any previous condensate disasters, but the hope is that the condensate will rise to the surface and evaporate quickly. If not, the spill has the potential to harm coral and other wildlife in China’s largest fishing ground. 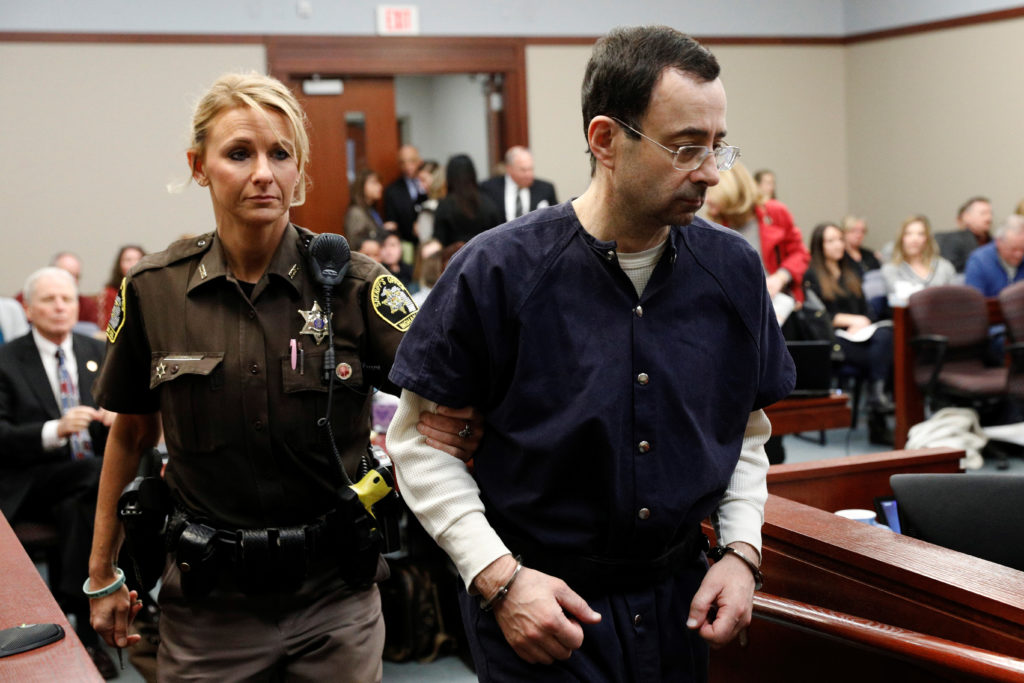 Larry Nassar, a former team USA Gymnastics doctor, who pleaded guilty in Nov. 2017 to sexual assault charges, returns from a break to listen to victim testimony in the courtroom during his sentencing hearing in Lansing, Michigan, on Jan. 23, 2018. Photo by REUTERS/Brendan McDermid

Last week, 140 women appeared before a Michigan court to detail years of sexual assault by Larry Nassar, a former sports medicine doctor at Michigan State University who for more than two decades also served as the team doctor for USA Gymnastics.

Several victims who spoke in court were former Olympic athletes, including Aly Raisman, a three-time gold medalist and captain of both the 2012 and 2016 U.S. Olympic teams. She used her time on the stand to not only criticize Nassar but also call out USA Gymnastics for not taking responsibility for its role in allowing the abuse to continue.

“Where is the transparency? Why must the manipulation continue?” she asked.

This week, the organization announced three of its top officials would resign, including John Geddert, who coached the country’s Olympic gymnastic team in 2012.

“We believe this step will allow us to more effectively move forward in implementing change within our organization,” USA Gymnastics said in a statement. [NBC]

Why it matters: One of the questions that remains, in Nassar’s case and others that have poured forward in the #MeToo movement: How was such widespread abuse allowed to continue for so many years?

In her testimony, Raisman asked USA Gymnastics why it hadn’t done more to protect Nassar’s victims. A lawyer for many of Nassar’s victims pointed out to NBC that USA Gymnastics had for years in court said it “had no duty to warn its member gymnasts even though they knew Larry Nassar was a molester.” Last year, the group failed to show up at a congressional hearing on how it handled reports of sexual abuse, citing pending legislation against Nassar, though it supported legislation that would require Olympic organizations “to immediately report accusations of abuse to police,” NBC reported.

A version of that legislation passed last year.

This is not easy for me to talk about. I am beyond devastated. I don't even know what words to use to describe how hard this is for me, my teammates who I care for so much & the many other survivors out there who I support with all my heart. https://t.co/1X0yS8irtg

Still, critics say the organization has been slow to implement changes. For instance, USA Today notes, the organization didn’t end its relationship with its Texas training facility, where many women say they were abused, until Olympic gold medalist Simone Biles came forward last week to say for the first time she had been abused, too.

“The Olympic family failed these athletes and we must continue to take every step necessary to ensure this never happens again,” Scott Blackmun, the CEO of the U.S. Olympic Committee, told USA Today.

For Raisman, the resignations were too little, too late, she said on Twitter. She called for an independent investigation.

4. Turkey is attacking the Syrian border 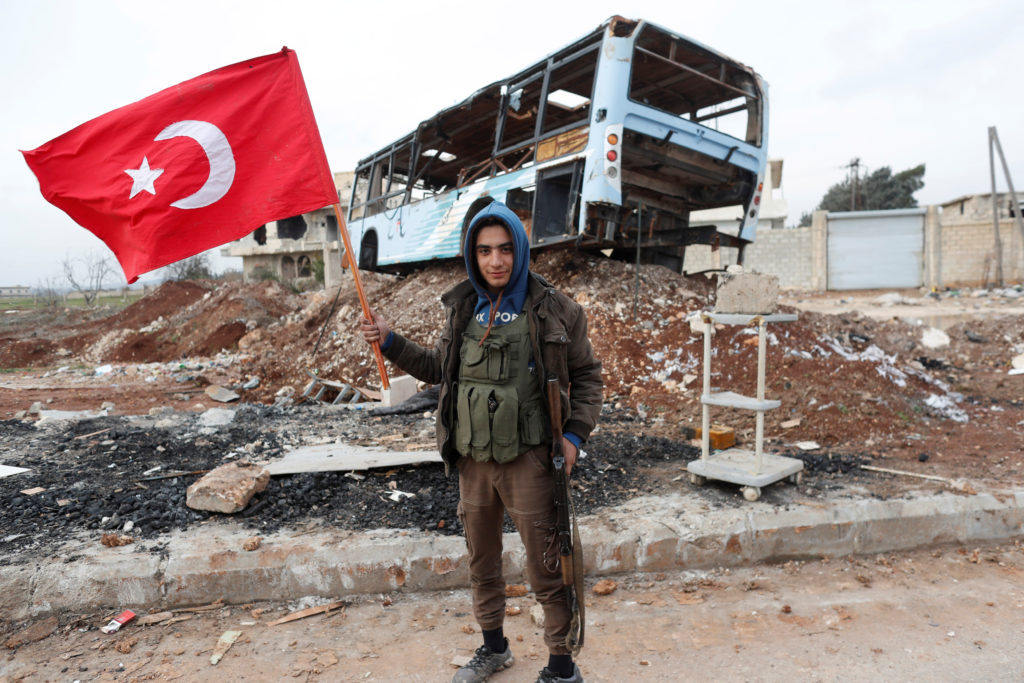 A Turkey-backed Free Syrian Army fighter holds a makeshift Turkish flag as he patrols on a road near Azaz, Syria, on Jan. 21, 2018. Photo by REUTERS/Osman Orsal

On Jan. 14, the U.S.-led coalition in Syria confirmed it was training a 30,000-member strong force to protect the Syrian border. Turkey immediately denounced the force, composed largely of the Syrian Democratic Forces (SDF), which the U.S. backed in the fight against ISIS. A major component of the SDF is the mainly Kurdish militia called the People’s Protection Units (YPG). Turkey sees the YPG as an extension of the Kurdistan Workers’ Party (PKK), which is considered a terrorist group in Turkey, the European Union and the U.S.

Why it matters: The fallout from this conflict is complicated, but one major effect is a rupture between two Nato allies: Turkey and the United States. A day after Erdogan denounced the border force, U.S. Secretary of State Rex Tillerson downplayed its efforts, saying it was “misportrayed,” and that the U.S. is “not creating a border security force at all.”

According to the Syrian Observatory for Human Rights, at least 81 people have died in battle near the border, including Kurdish fighters, Syrian rebels fighting with the Turks and civilians. Turkish media reports that a Turkish soldier has also died in battle.

Erdogan threatened on Monday to push further into Syria to the city of Manbij, where the U.S. has troops stationed to battle ISIS, which would put U.S. troops in potential conflict with its ally’s military. The U.S. is currently in talks with Turkey, and has said it recognizes the legitimacy of its concerns. Turkey has said it does not want to engage with the U.S. or Syrian forces, but it will take the necessary steps to defend their national security.

5. A major city in South Africa is running out of water 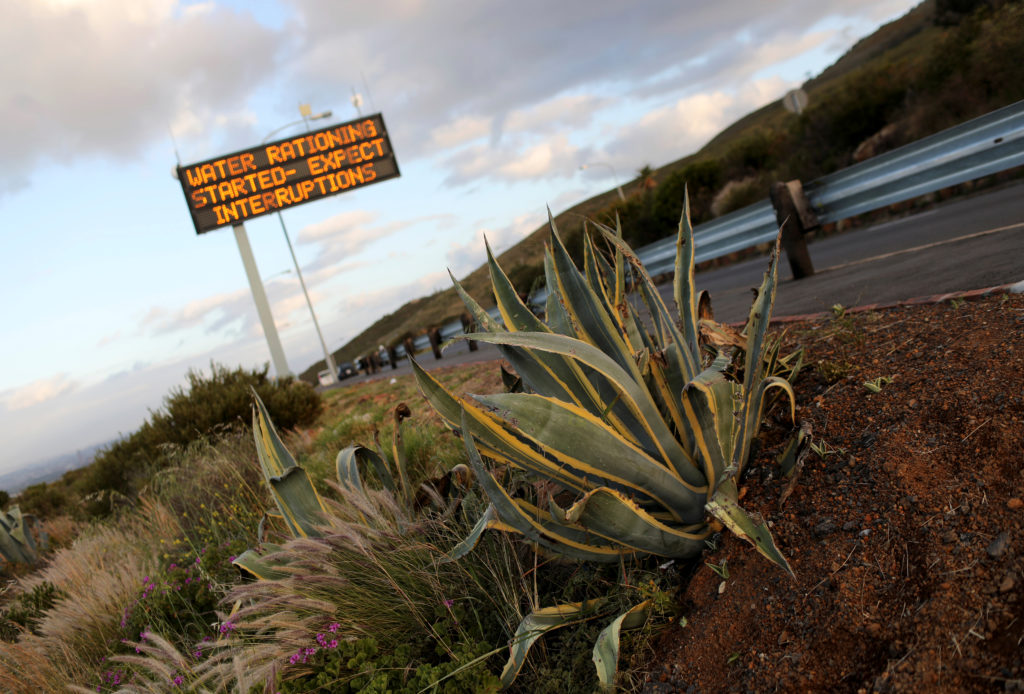 Cape Town, one of South Africa’s capital cities, is experiencing a water crisis that is totally unprecedented. The city has calculated a “Day Zero,” on which it expects to completely run out of water. The current Day Zero is April 21, moved up in early January by the city’s mayor from April 29, and then again this week from April 22. The shortage is being blamed largely on three years of drought, though Cape Town’s population has boomed without the water infrastructure keeping step. [TIME]

Why it matters: Once it reaches Day Zero, defined as when dams reach 13.5 percent capacity, the city will turn off the municipal taps for all but essential services, like hospitals. Officials will meter out water for residents from 200 water stations across the city, capping it at 6.6 gallons per person.

But the drought in Cape Town is also a global issue, as the drought is indicative of a changing climate, experts say. Before its drought, Cape Town regularly had wet winters, which produced on average three times the amount of water the city needed. Kevin Winter, a senior lecturer in environmental science at the University of Cape Town, told Al Jazeera that Cape Town would need three years of regular rainfall to refill the dams to pre-drought levels. Capetonians are already limiting their water usage, but as Mayor Patricia de Lille said in a Jan. 18 news conference, the city has “really reached the point of no return.”

Left: People gather at a makeshift memorial in the middle of Las Vegas Boulevard following the mass shooting in Las Vegas, Nevada. Photo by REUTERS/Chris Wattie.

U.S. troops could be in Syria indefinitely. Here’s why