5 Stories: Manicures with microchips, Dorothy’s dress finds its way home and other stories you missed

The giant panda is no longer an endangered species, China’s Ministry of Ecology and Environment has declared, downgrading the species’ status to “vulnerable” on July 8.

The international community hasn’t considered the giant panda endangered for more than five years. The International Union for Conservation of Nature labeled the species as “vulnerable” in 2016 when it said there were 1,864 giant pandas in the wild.

At the time, China pushed back against the decision, fearing their efforts to protect the species would be undermined. 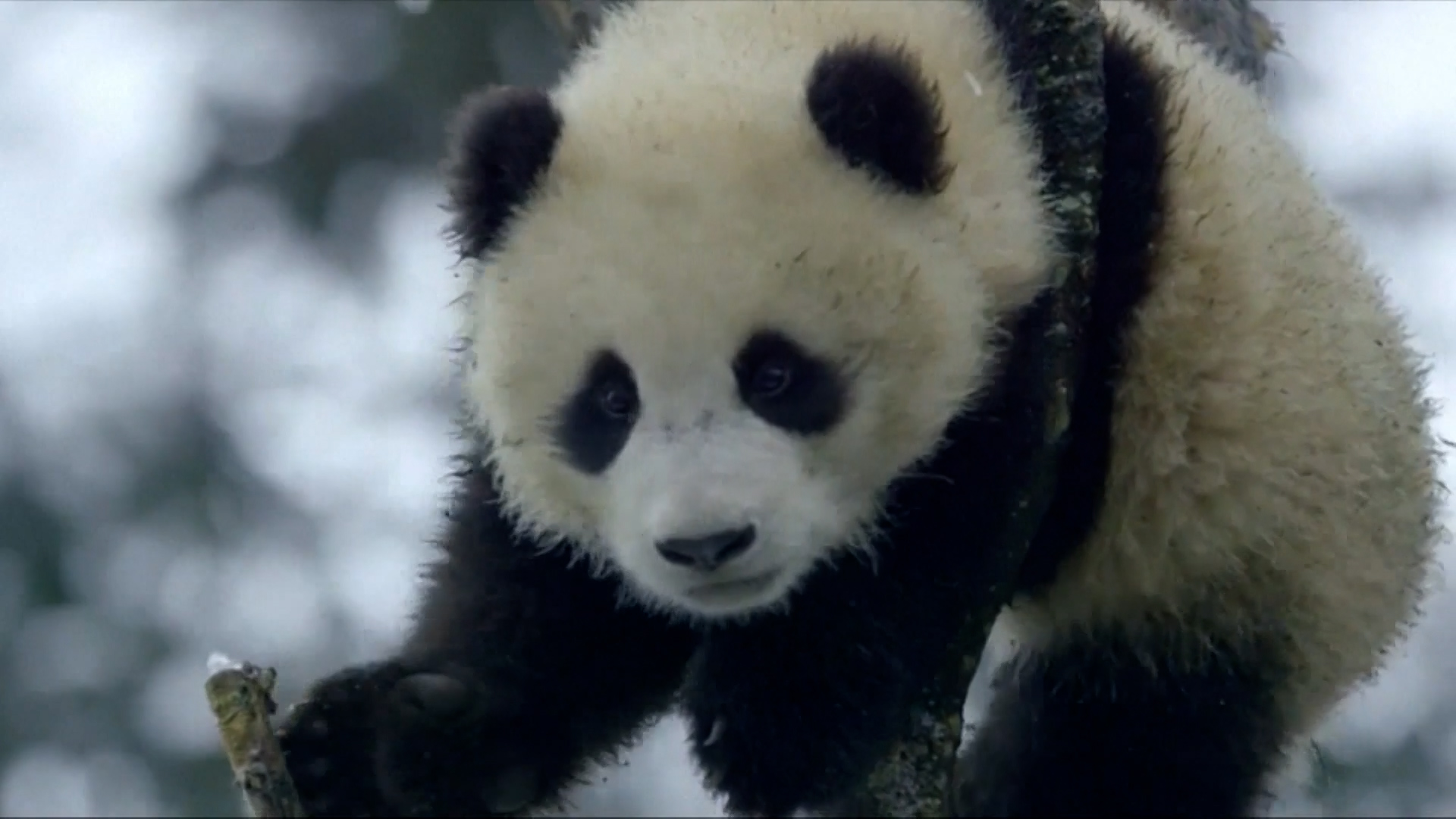 It is unclear why they’ve changed the status now, especially given state media reports that there are still only 1,800 living in the wild, but ministry officials did credit its system of interconnected nature preserves, stricter law enforcement actions against illegal activities in preserves and education efforts for contributing to the decision.

Giant pandas, a national symbol in China, live mostly in forests located in the southwest part of the country. Their territories often overlap with agricultural villages that have worked to protect the mammals and their habitat.

An ecological disaster struck the coastlines of the Pacific Northwest and parts of Canada in the wake of last month’s record-breaking heat wave. Researchers say the series of 100-plus degree days left more than 1 billion marine animals dead.

The region’s normally cool, crisp waters are usually an ideal place for shellfish. Mussels and barnacles, which live where tides come in and out, can close up when it is low tide and use the water inside their shells to keep cool. But with temperatures as high as 121 degrees in some parts of British Columbia, there was no escape for these creatures.

The death of millions of oysters, mussels, clams and other shellfish will be a catastrophic loss for local seafood industries.

And beyond the economic toll is an ecological one: Many of the animals that perished clean the seawater as they filter feed, as well as act as a major food source for seabirds and other animals.

Nearly two-thirds of the world’s cocoa production comes from West Africa where an estimated 1.6 million children work illegally to help harvest it.

Some major companies like Nestle and Cargill have been sued — unsuccessfully — over claims of knowingly buying cocoa beans from farms that used child slave labor. But one company in the Netherlands is determined to help ethically satisfy your sweet tooth, the PBS NewsHour Weekend reported.

Tony’s Chocolonely is a chocolate company that’s based entirely around fighting child labor in the industry, and its name is a play on the idea that it’s “lonely” or alone in mission. Their branding is fire engine red, like an alarm, and their chocolate bar design offers a visual metaphor: larger chunks for the industry profiting off of child labor and smaller “crumbs” for the children and farmers.

Chocolonely is a relatively small player in the $100 billion a year industry. But the company tracks its cocoa beans to ensure they have been ethically farmed and processed, and charges a higher price for their bars in order to give more back to their farmers.

Networking with a microchip manicure

A Dubai salon owner has a new way to keep your nails from ever becoming basic. The microchip manicure is a high-tech, contactless, beauty-based business card solution. 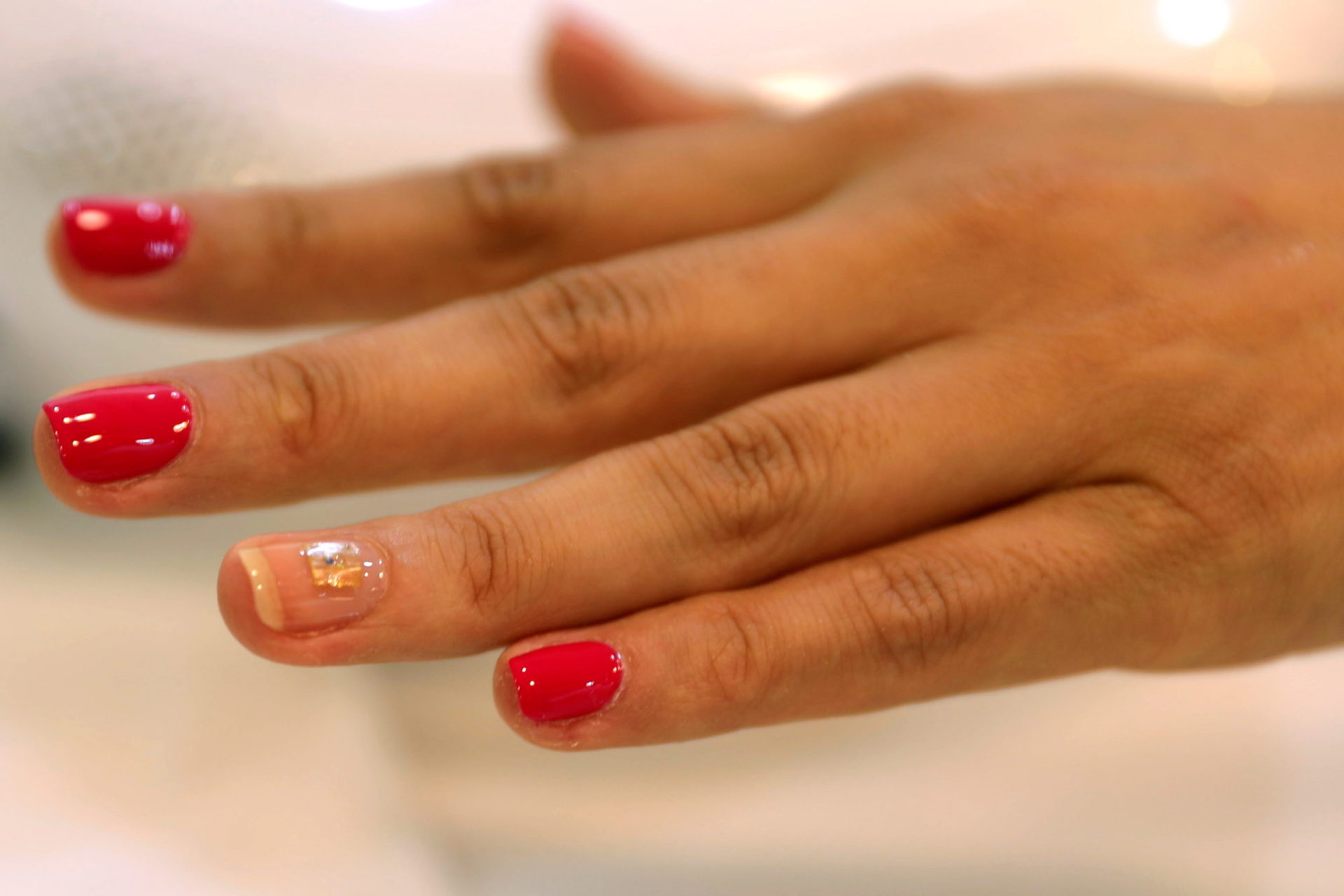 A customer gets a microchip, containing personal data, attached to one of her nails at Lanour Beauty Lounge in Dubai. Photo: Rula Rouhana/Reuters

Lanour Beauty Lounge owner Nour Makarem developed the networking idea during the pandemic, while thinking of ways to adhere to social distancing. Her clients upload their desired information – like social media pages, websites or resumes – to a microchip through an application on their smartphones. Then, the nail technician glues the microchip onto a customer’s nail and covers it with a coat of their favorite nail polish color.

The chips use near field communication technology — the same tech used by a credit card that lets you pay for groceries with just a tap — to connect with others via mobile devices.

According to CNN, the company has completed more than 500 microchip manicures so far.

Legend had it that Catholic University had a lost treasure – an iconic blue gingham dress worn in “The Wizard of Oz” by none other than Judy Garland.

Mercedes McCambridge, actor and friend of Judy Garland, had given the dress to Rev. Gilbert Hartke, the head of the university’s drama program, in the 1970s. But after some initial fanfare, the dress went missing.

For years, university staff searched campus for the missing frock but feared it was gone for good.

Then in June, Matt Ripa, who works in the drama department, was cleaning up to get ready for some renovations when he found something on top of the faculty mailboxes. The dress was hidden in a shoebox, inside a garbage bag. Apparently, another, now-retired staff member had found it and left it for Ripa years earlier, but it had been misplaced before he opened the box.

Ripa snapped some photos and took the dress and blouse to the university archives, which then called the Smithsonian, home of some of Dorothy’s ruby slippers. 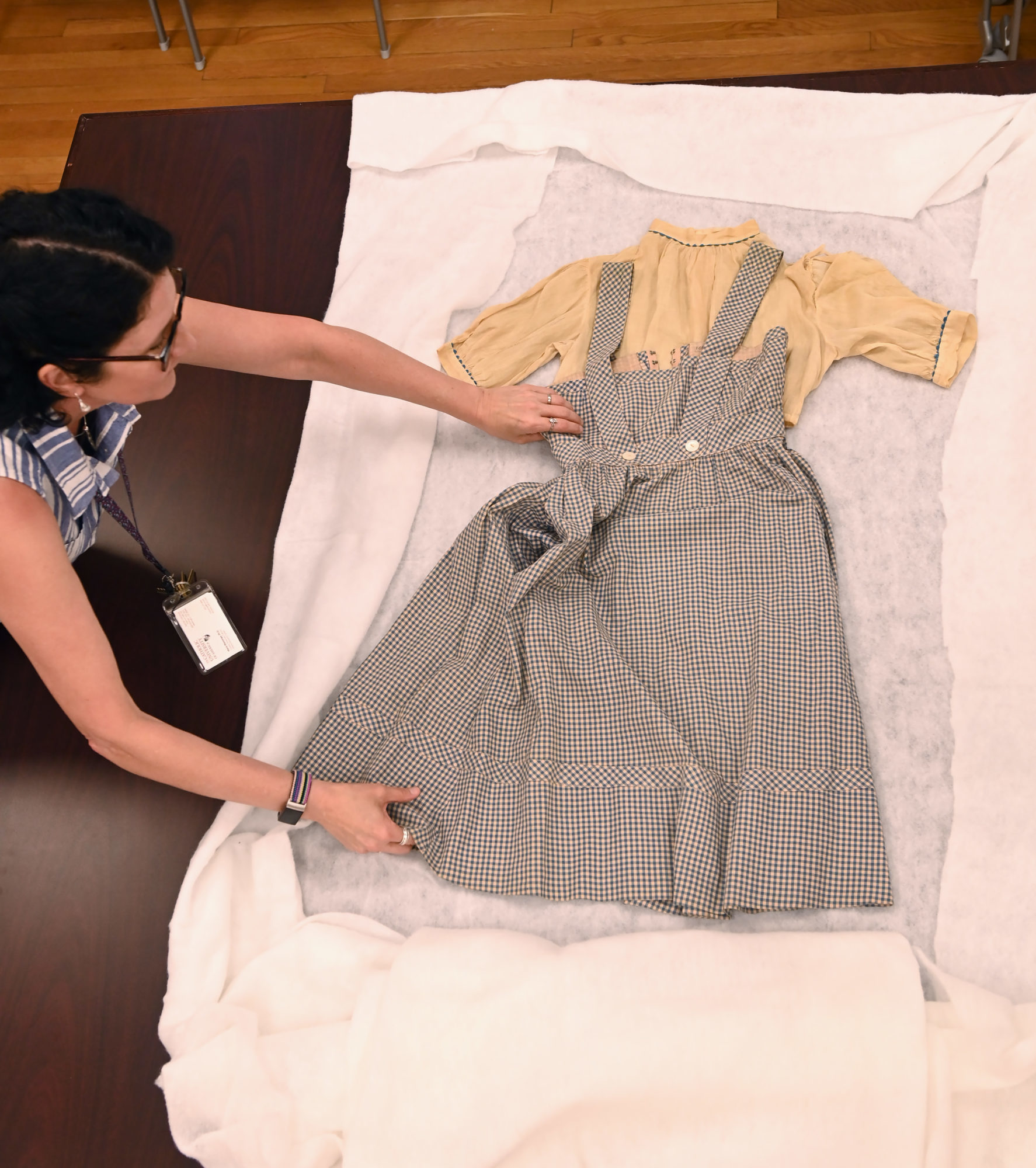 Experts at the Smithsonian’s Museum of American History inspected the dress and found signs that it’s likely authentic.

Each dress has a few telltale signs – a hidden pocket for Dorothy’s handkerchief on the right side, and the star’s name and costume’s wardrobe number written on the fabric. The material of the blouse was also prone to tearing and Catholic University’s had similar damage where the dress’s straps sit on the shoulders.

If Catholic University is able to verify it’s the real deal, it’ll be one of six Dorothy dresses in existence. The university plans to put it on display in the near future.