In the lead up to the hearings, Democrats used Brett Kavanaugh’s political career to paint him as a conservative judge far outside of the legal mainstream on issues including guns, abortion and presidential power.

But in his opening statement Tuesday and again under questioning Wednesday, Kavanaugh, a federal judge who was appointed in 2006 by President George W. Bush to the D.C. Circuit Court of Appeals, came across as an impartial jurist with a strong grasp of constitutional law.

Kavanaugh appeared calm during nearly 12 hours of questioning by members of the Senate Judiciary Committee, even when the hearing — for the second day in a row — was repeatedly interrupted by protesters who oppose his nomination.

But the judge did show flashes of frustration and impatience, including when he was pressed on his record working in the Bush White House.

Kavanaugh appeared to lose his composure and grow irritated when he was questioned by Sen. Patrick Leahy, D-Vt., about his time working as an attorney and staff secretary under Bush, and later on during exchanges with Sen. Cory Booker, D-N.J., and Sen. Kamala Harris, D-Calif.

Leahy, citing classified documents from Kavanaugh’s record that were not made public ahead of his confirmation hearing, made a compelling argument that Kavanaugh gave misleading testimony during his 2006 confirmation hearing to join the D.C. appeals court, meticulously and methodically using Kavanaugh’s own words from that time against him.

The Vermont senator also challenged Kavanaugh on what he knew about an early Bush-era scandal involving a Republican Senate staffer who stole private emails from Leahy and other Democrats detailing their strategy for opposing conservative judicial nominees. Leahy had Kavanaugh read some of his old emails from the time, and the judge stumbled through them without providing clear answers about his work in the White House. Kavanaugh denied giving misleading testimony, but it was one of his weakest moments of the day.

Other Democrats dredged up past rulings from Kavanaugh’s 12 years on the bench, and his association with a former federal judge who was accused of sexual misconduct. (Kavanaugh has described the judge, for whom he clerked in the early 1990s, as a mentor and friend, but denied knowing about the allegations until they became public.) Kavanaugh navigated those questions with ease. 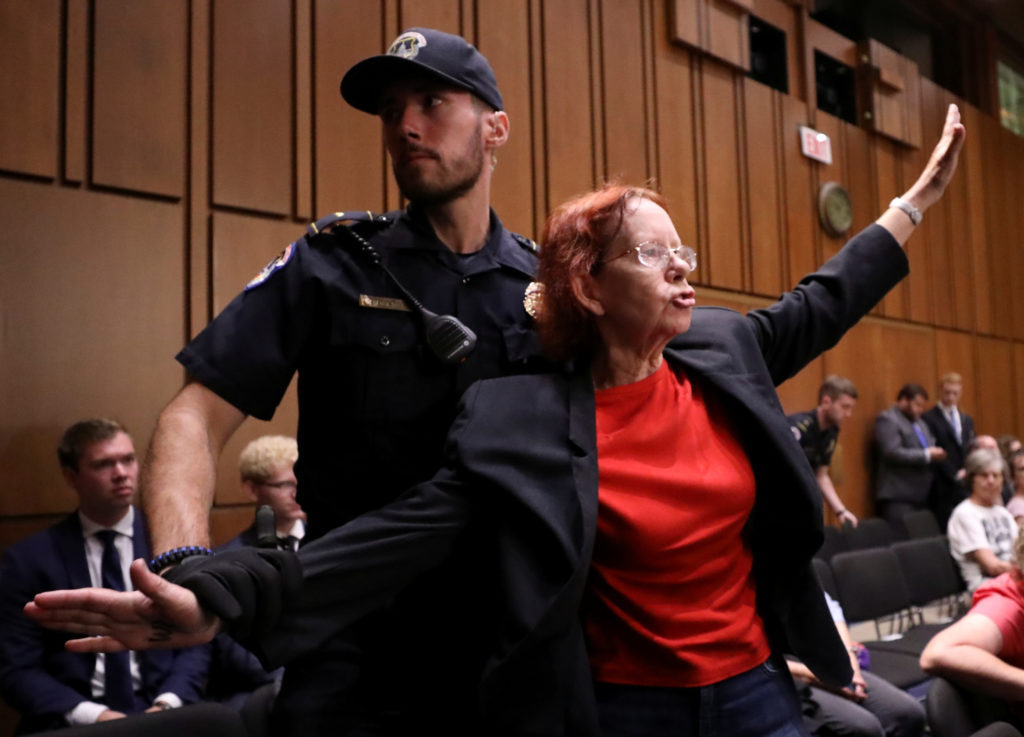 But he appeared most flustered under questioning from Booker and Harris, two Democrats on the shortlist of the party’s rumored 2020 White House hopefuls.

Booker asked Kavanaugh for his views on laws against racial discrimination and protecting voting rights, at one point citing an email the judge wrote in which he used the term “a naked racial set-aside.”

“What email are you reading from?” a red-faced Kavanaugh asked. “Can I get a copy of it?”

Booker chastised Kavanaugh in his closing remarks, saying, “your answers don’t provide me comfort.” But Kavanaugh got in the last word by asking for extra time to defend his record on voting rights and hiring a diverse group of law clerks.

Who has Kavanaugh spoken to about Mueller’s Russia investigation?

Harris opened her 30-minute question period by asking Kavanaugh if he had spoken about special counsel Robert Mueller’s Russia probe with anyone at the law firm Kasowitz Benson Torres. Marc Kasowitz, a partner at the firm, worked as President Donald Trump’s personal attorney before resigning last year.

A visibly flustered Kavanaugh stonewalled at first, refusing to answer the question. After Harris repeated it several times, he said he did not remember “anything like that,” but said he wanted to see a “roster” of lawyers at the firm to know who worked there to be sure of his answer. 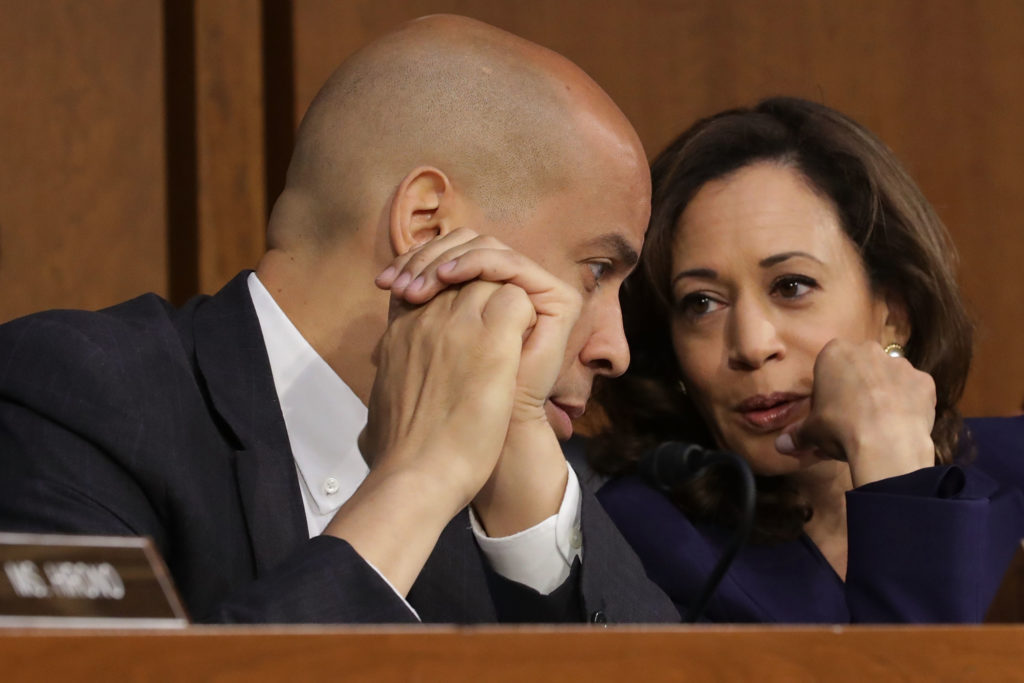 Notably, Kavanaugh did not deny, under oath, that he had spoken to anyone at the firm about the Mueller investigation. Harris moved on, but her point had been made.

Yet despite those fireworks, the Democrats’ first crack at Kavanaugh did not change the likely outcome of his confirmation hearing. With Republicans in control of the Senate, and several Democrats expected to vote for Kavanaugh, his confirmation is all but assured.

What did we learn about Kavanaugh’s views? Not much

In theory, Supreme Court confirmation hearings are supposed to shed light on a nominee’s positions on major policies. In practice, at least in recent years, the exact opposite takes place: nominees insist they cannot comment on topics that they might rule on in future Supreme Court cases, and no amount of cajoling by senators gets them to change their mind.

On Wednesday, Kavanaugh was no different. Again and again, he declined to express his views directly, or say whether he believed recent Supreme Court and lower court rulings were correctly decided or not.

The Democrats’ first crack at Kavanaugh did not change the likely outcome of his confirmation hearing.

Take abortion: Kavanaugh said the Roe v. Wade ruling was established precedent. But when asked directly by Sen. Richard Blumenthal, D-Conn., if he would vote to overturn the decision, Kavanaugh deflected, pointing out that other recent Supreme Court nominees had also refused to answer the question.

Kavanaugh cited the examples set by Justices Ruth Bader Ginsburg and Elena Kagan, who said during their confirmation hearings that they would not comment on topics they might rule on as members of the Supreme Court.

The strategy makes sense; Justice Neil Gorsuch followed a similar playbook during his confirmation hearing last year. But it doesn’t provide a deeper understanding of a Supreme Court nominee’s views. Kavanaugh emerged from 12 hours of questioning Wednesday as inscrutable as he was before the day started.

Can Trump fire Mueller? To Kavanaugh, it’s an “open question”

Democrats and Republicans asked Kavanaugh to explain his views on presidential power, a topic that has gained attention as Trump faces mounting legal pressure from Mueller’s Russia investigation.

In a public appearance in 2016, Kavanaugh said he would “put the final nail” in Morrison v. Olson, a 1988 Supreme Court ruling which upheld the attorney general’s authority to appoint an independent counsel.

The law authorizing independent counsels expired in 1999; Mueller’s investigation into Russia’s ties to the Trump campaign is governed by a different set of Department of Justice guidelines. Nevertheless, Democrats have used the comment in the months since Kavanaugh’s Supreme Court nomination to question whether he would protect Mueller’s probe. 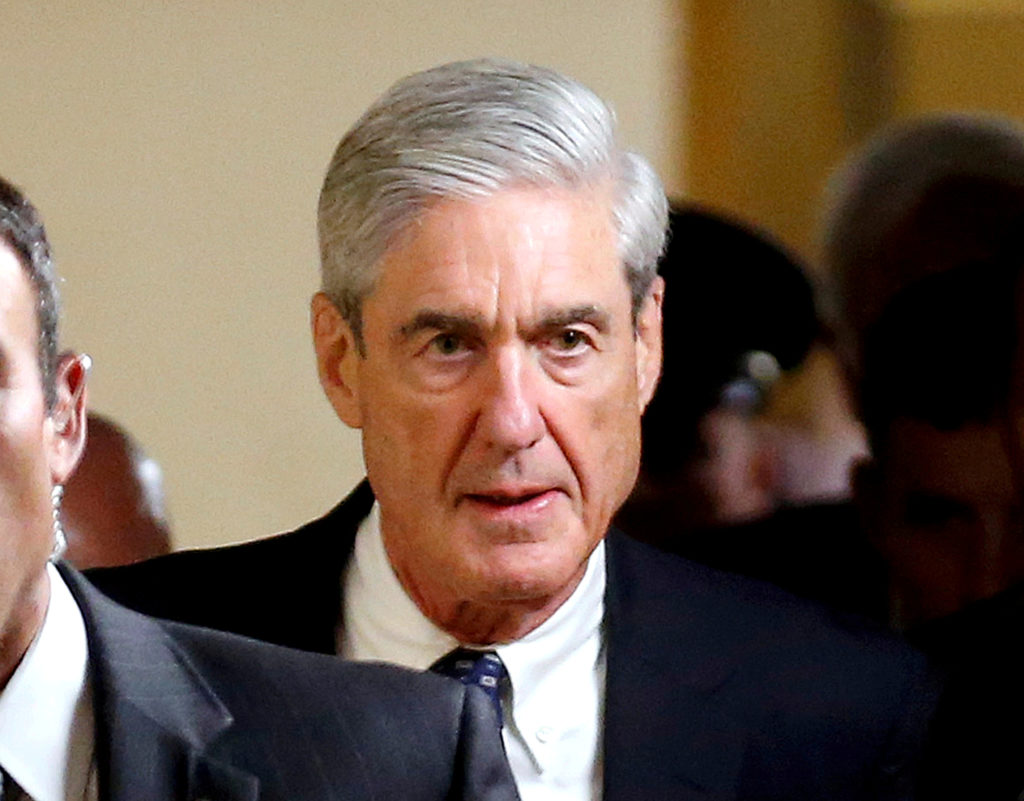 The New York Times reported that Trump tried to fire Mueller last year, something the White House has denied. On Wednesday, Sen. Chris Coons, D-Del., asked Kavanaugh specifically if the special counsel could be “fired at will, or only for cause?”

That is an “open question,” Kavanaugh answered. He added that he would “keep an open mind.”

On presidential power (and pardons)

Earlier in the hearing, Leahy asked Kavanaugh if he agreed with Trump’s claims that as president he had the power to pardon himself.

Trump claimed in a tweet in July that “numerous legal scholars” believe he has the “absolute right” to pardon himself, though he added that he had no reason to do so because “I have done nothing wrong.”

“I don’t think we want judges to comment on the latest political controversy.”

The comments sparked a debate about the limits of a president’s authority to issue pardons, and whether Trump might pardon anyone caught up in the Russia investigations.

Kavanaugh told Leahy that speculation over a potential self-pardon was “a hypothetical question that I can’t begin to answer.” He used the refrain often to avoid speaking about how his views on executive power might apply to Trump, frustrating Democrats and some Republicans.

When Sen. Jeff Flake, R-Ariz., a vocal Trump critic, brought up the issue of presidential power, Kavanaugh cut the discussion short. “I don’t think we want judges to comment on the latest political controversy,” Kavanaugh said, adding that he would “avoid commenting on any current events.”