Your guide to the Kavanaugh confirmation hearings

The confirmation hearings for Supreme Court nominee Brett Kavanaugh begin Tuesday. The federal judge will be the center of attention in Washington this week, as Senate Republicans and Democrats dig into his record and views on key issues over the next several days.

Here’s a guide to the hearings.

When to watch. Tuesday’s hearing will be devoted to opening statements, mainly by members of the Senate Judiciary Committee and Kavanaugh. We expect Wednesday, when senators begin their first round of questions, to be the more substantial day. Each senator will get 30 minutes. On Thursday, senators get a second round of questions, for 20 minutes a piece. Friday is set aside for witnesses who will testify for and against Kavanaugh’s nomination. Among the notable speakers will be John Dean, who served as White House counsel to Richard Nixon.

The big topics. If confirmed, Kavanaugh would replace former Justice Anthony Kennedy and likely step into Kennedy’s role as a pivotal swing vote. Given the stakes, senators from both parties will press Kavanaugh on the most hot-button issues in American life today. Watch especially for questions on these topics: abortion, presidential power, same-sex marriage, the Affordable Care Act, immigration and environmental and energy-related regulations. And expect a specific question early: Would Kavanaugh recuse himself from any case involving President Donald Trump and/or special counsel Robert Mueller’s investigation into Russian election interference and possible ties to Trump’s campaign? 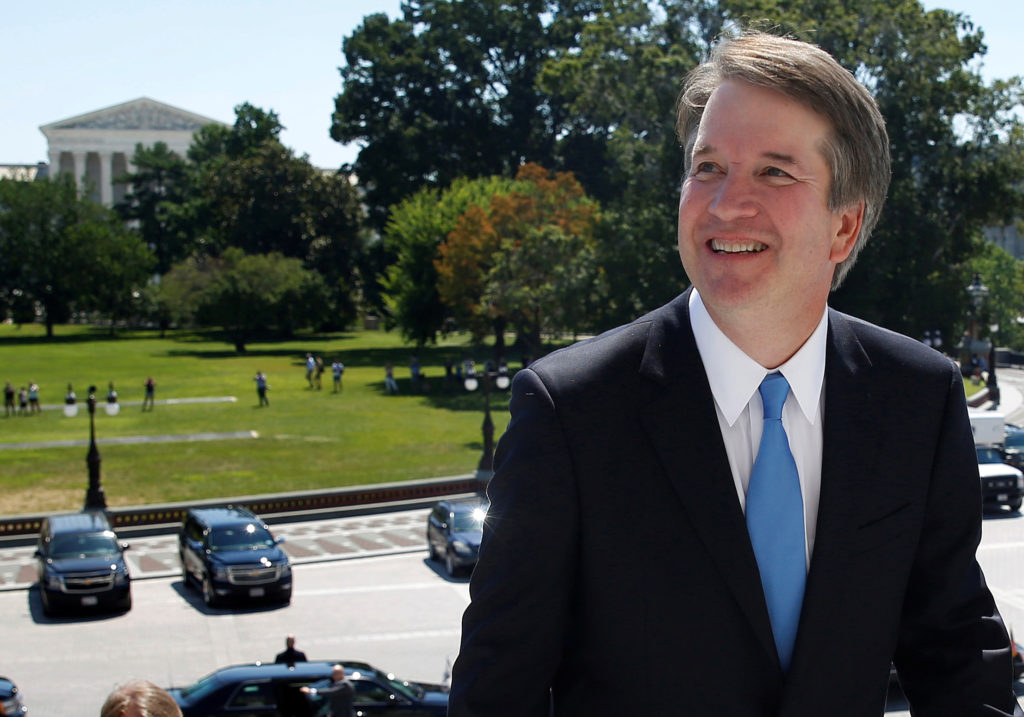 Supreme Court nominee Brett Kavanaugh will be the center of attention this week in Washington during his confirmation hearings. File photo by REUTERS/Joshua Roberts

How does Kavanaugh handle the most contentious Democrats? Sitting on the Judiciary Committee are two of the most vocal Kavanaugh opponents in Congress: Sens. Richard Blumenthal, D-Conn., and Mazie Hirono, D-Hawaii. Both have declined to meet with the nominee, and Blumenthal has pledged that “sparks will fly” during the hearings. These two Democrats are likely to press Kavanaugh on guns, abortion and the potential prosecution of Trump. Pay close attention to both the style and substance of Kavanaugh’s answers: Will he stay steady, or show frustration?

How does Kavanaugh handle less contentious Democrats? The Judiciary Committee includes two other Democrats known for a more stoic approach, Sens. Chris Coons, D-Del., and Sheldon Whitehouse, D-R.I. Coons in particular is seen as a more bipartisan Democrat, but he has raised concerns that Kavanaugh may give different answers in public at the hearings than he does in private. Watch during Coons and Whitehouse’s rounds of questions to see if we learn anything new about Kavanaugh’s approach to the high court.

Pay close attention to both the style and substance of Kavanaugh’s answers: Will he stay steady, or show frustration?

Does Kavanaugh veer at all from Chief Justice John Roberts’ answer on abortion? And which senators ask him about it? When Roberts was asked about Roe v. Wade at his confirmation hearings in 2005, he said that the seminal Supreme Court ruling on abortion was “settled as a precedent of the court.” Fast forward 13 years: After her private meeting with Kavanaugh over the summer, Sen. Susan Collins, R-Maine, told reporters that Kavanaugh said “he agreed with what Justice Roberts said at his nomination hearing, in which he said that it was settled law.” (At his confirmation hearings last year, Supreme Court Justice Neil Gorsuch called Roe v. Wade “the law of the land.”) Watch to see if Kavanaugh uses any other wording this week. It’ll also be interesting to see who asks him about the issue. The Judiciary Committee is comprised of 21 members: 17 men and four women.

2020 and the future of the Democrats. The last two Democrats who will ask Kavanaugh questions — Sens. Cory Booker, D-N.J., and Kamala Harris, D-Calif. — are both on potential presidential -hopeful lists. This is a test for both, to see if they can appeal both to their party’s anti-Kavanaugh base and to the decisive swing voters who moved between Presidents Obama and Trump in the last two presidential elections. Watch them both, as well as other Democrats, to see if their concerns are broad and in line with the majority of the country, or if their questions mostly align with the Democratic Party’s core voters.