56,000 cases put on fast-track in US immigration courts

LOS ANGELES — Rosita Lopez said armed gang members demanded money from her and her partner at their small grocery store on the Guatemalan coast and threatened to kill them when they couldn’t pay. When her partner was shot soon afterward, they sold everything and fled north.

Lopez was eight months pregnant when the couple arrived at the U.S.-Mexico border last year with their 1-year-old daughter. Just over a year later, an immigration judge in Los Angeles heard her case, denied her asylum and ordered her deported.

“I’m afraid of going back there,” she told the judge.

The decision for 20-year-old Lopez — who now has an American-born baby — was swift in an immigration court system so backlogged with cases that asylum seekers often wait years for a hearing, let alone a ruling on whether they can stay in the country.

But her case is one of 56,000 in a Trump administration pilot program in 10 cities from Baltimore to Los Angeles aimed at fast-tracking court hearings to discourage migrants from making the journey to seek refuge in the United States. The administration selected family cases in those cities from the past 10 months. 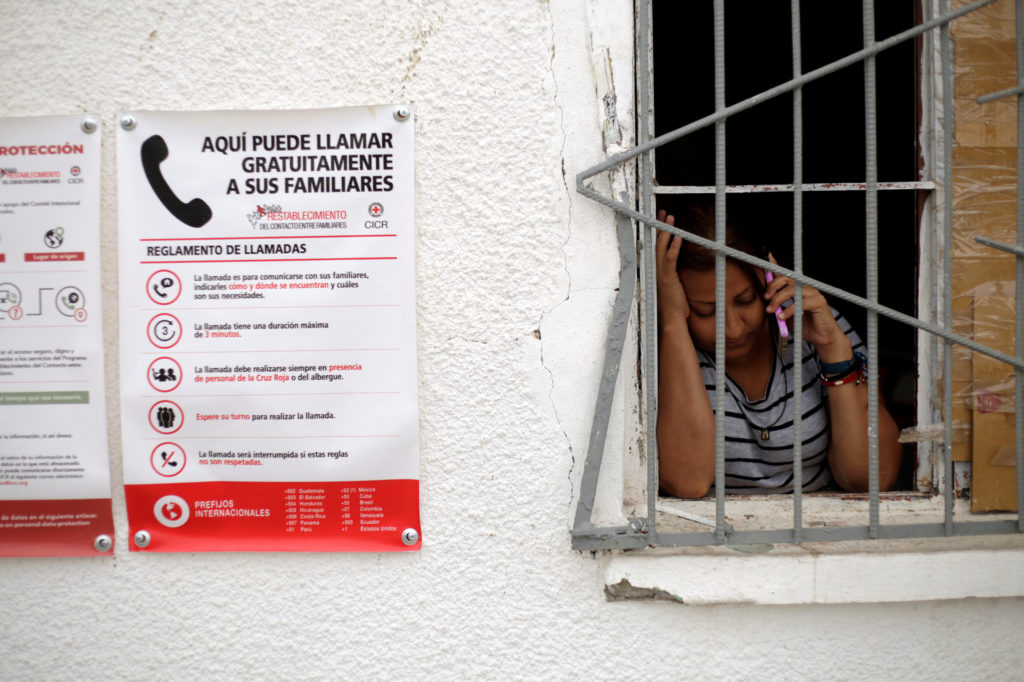 A Central American migrant, who is waiting for her court hearing for asylum seekers that returned to Mexico to await their legal proceedings under a new policy established by the U.S. government, uses a phone at a migrant shelter in Ciudad Juarez, Mexico June 10, 2019. Photo by Jose Luis Gonzalez, Reuters.

Immigration lawyers who often complain it takes too long to get a court date said the new timetable is too fast to prepare their clients to testify and get documents from foreign countries to bolster their claims.

“The families that are all ready to go and desperate, ready with counsel, have survived multiple atrocities can’t seem to get before the judge, and others who seem to need time to get their cases together, they’re pushing through without due process,” said Judy London, directing attorney of the immigrant rights’ project at Public Counsel, a pro bono law firm in Los Angeles.

The program is one way the Trump administration is seeking to curtail the arrival of tens of thousands of Central American families each month on the U.S.-Mexico border, many seeking asylum. Federal courts have blocked several efforts to limit asylum for the families, including rules that would prevent most migrants from seeking asylum in the U.S. if they passed through another country first. 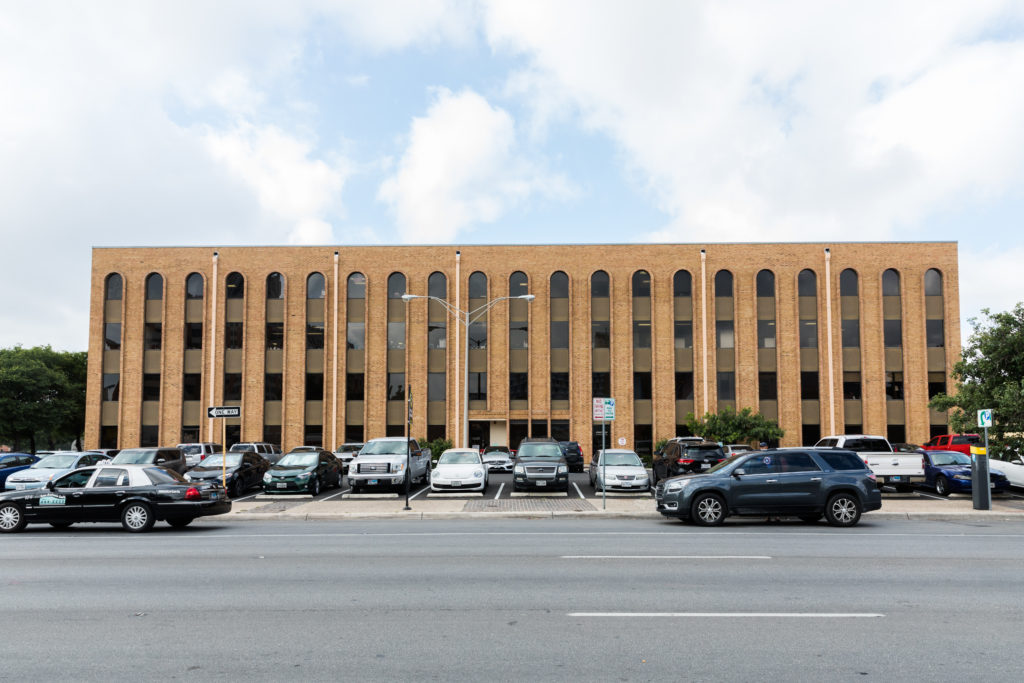 An immigration court in downtown San Antonio where judges hold bond hearings and other cases for detained immigrants. Photo by Photo by Phil Kline for PBS NewsHour

Speeding up court hearings aims to prevent migrant families from setting down roots while they wait to find out whether they qualify for asylum.

Immigrants can get permits to work legally in the United States once their asylum applications are pending before a judge for six months, which many with fast-tracked cases won’t get to do, lawyers said.

The goal is to “disincentivize families — where an overwhelming majority of cases don’t qualify for relief, but instead end with removal orders — from making the treacherous journey to the United States,” Immigration and Customs Enforcement said in a statement.

Immigration courts aim to complete the fast-tracked cases within a year, James McHenry III, director of the Executive Office for Immigration Review, wrote in a November memo.

From September to June, the Department of Homeland Security tracked 56,000 cases it wants heard more quickly, according to data from the office, which runs immigration courts. Most cases are pending, but about one in five of those immigrants failed to show up for a hearing and was ordered deported, the data shows.

A recent immigration enforcement operation announced by President Donald Trump aimed to track down and arrest families facing such deportation orders. While agents targeted about 2,100 people, they arrested about three dozen.

The families’ cases are moving much quicker than usual through immigration courts, which have nearly 900,000 cases that have been pending for an average of two years, according to data from the Transactional Records Access Clearinghouse at Syracuse University. 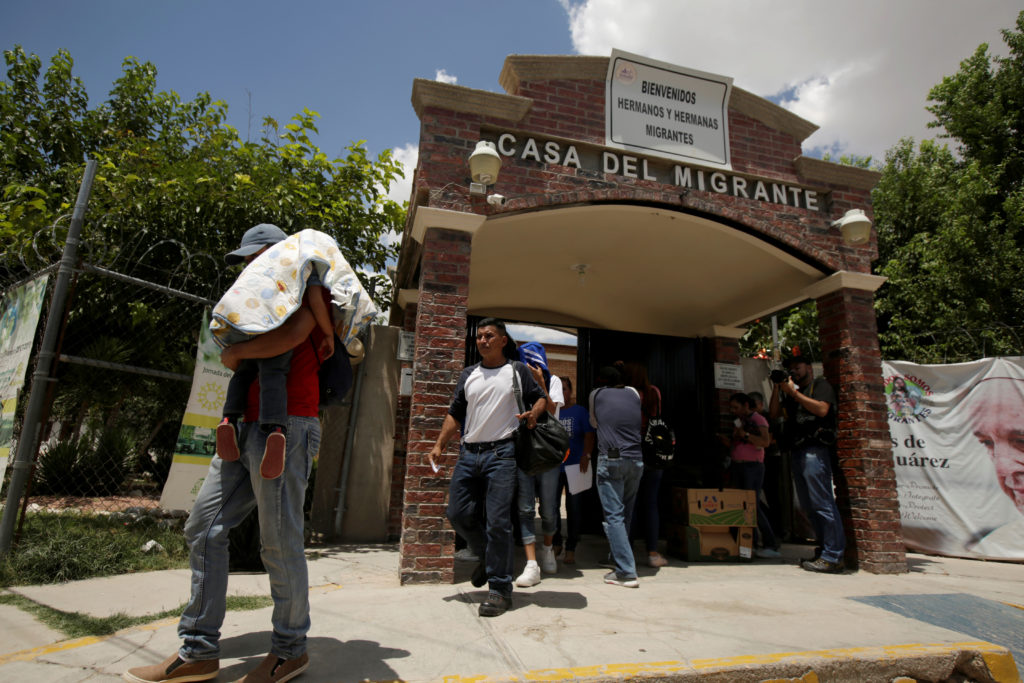 Central American migrants prepare to board a bus to travel to Mexico City after they voluntarily asked to return to their countries, due to waiting too long for a court hearing for asylum seekers that returned to Mexico from the U.S. under a new policy established by the U.S. government, in Ciudad Juarez, Mexico, July 30, 2019. Photo by Jose Luis Gonzalez, Reuters.

Immigrant advocates have long complained the backlog prevents asylum seekers from starting their lives in the U.S. and bringing family to join them.

It wasn’t immediately clear how the immigration courts could hear the fast-tracked cases so quickly. But the U.S. has hired more immigration judges in recent years to try to reduce the backlog.

In Los Angeles, some immigration judges who used to hear cases of immigrants held in now-shuttered detention facilities are assigned to family cases.

At another, Judge Frank Travieso urged immigrants appearing for the first time to find an attorney for their next court date in a month. He went over the parents’ names and addresses and those of their children squirming beside them — a smiling 7-year-old boy, a 9-year-old girl with a red hair bow, and half a dozen others.

He then reviewed the rest of his 46-case calendar. A few families who didn’t receive a hearing notice were sent another. Fourteen people who didn’t attend court — half of them children — were ordered deported.

Bernal Ojeda, an immigration attorney who represented Lopez, said he doesn’t know if more time would have helped her case. Lopez presented photos of her partner’s gunshot wounds, and the judge questioned why he didn’t tell Guatemalan authorities about the gang.

Ojeda said Lopez won’t appeal and will return to Guatemala, where her partner was already deported, and resettle far from the town where they were threatened.

Asylum seekers who appeal wind up staying much longer while their cases are reviewed. But the timeline means little to those seeking protection in the U.S., said Joshua Greer, an immigration attorney in Los Angeles.

“They’re not looking at how long was it between the first hearing and the pleadings and the individual hearing,” Greer said. “Their question is detained, or not detained, and sent back or not sent back — and that’s it.”

Left: FILE PHOTO: Central American migrants, who returned to Mexico from the United States to await their court hearing for asylum seekers, as part of the legal proceedings under a new policy established by the U.S. government, sleep outside the Our Lady of Guadalupe Cathedral in Ciudad Juarez, Mexico, July 14, 2019. Photo by Jose Luis Gonzalez, Reuters.