8 things you didn’t know about bees

Beekeepers all over the world have reported significant colony losses in the last ten years. Those may be caused by the interconnected effects of pesticides, parasites, landscape changes and a warmer climate. But the good news is that the phenomenon has shined a spotlight on one of the nation’s most ubiquitous workers, reinvigorated local beekeeping and sparked a bustling local honey movement. Here are some unforgettable takeaways:

1. Forgive us, but honey is bee vomitus

Bees need pollen mostly for the protein, and nectar mostly for the carbohydrates. Whatever they don’t eat in the field, they store away for the hive. Extra pollen, which is the male germ of the flower, goes into buckets on their hind legs. But the extra nectar heads to their special honey stomach called the crop, where it is mixed with an enzyme called invertase. The enzyme splits the sucrose into two sugars: glucose and fructose.

After the bee has collected from as many as 100 flowers, it will head back home with its buckets full of pollen and crop full of nectar, which it will regurgitate when it arrives and pass along to a house bee mouth-to-mouth. The house bees chew it to squeeze out excess water and then spit it back out into the cell of a honeycomb for storage. An average worker bee will make one and a half teaspoons of honey in its short lifetime.

2. Thank bees for coffee and chocolate!

Wasps, bats, hummingbirds, beetles, butterflies and thousands of other critters all perpetuate pollination, which helps fertilize nearly 75 percent of the country’s agricultural crops. While it’s usually unintentional, the pollen — the male part of the flower — sticks to their bodies and legs and they carry it to the female part of the same or another flower. This allows the plant to grow a fruit or seed.

Many staples of an American diet, such as coffee, chocolate, berries, fruits and nuts, rely on this process. But when wind, animals and insects in the wild aren’t enough to pollinate domestic crops, farmers need some extra help. Since bees are so efficient and easy to transport, there’s a $15 billion industry dedicated to hive rentals for farmers’ fertilizing pleasure.

California almonds employ as much as 75 percent of the commercial bee hive workforce in the U.S. because they are almost exclusively pollinated by honey bees, and the state produces 80 percent of the world’s almonds. Its almond industry requires the services of 1.4 million hives a year that are from all over the country.

According to the U.S. Department of Agriculture, sunflowers and canola seed both take up close to 17 percent of commercial hives, while grapes, apples, cherries watermelons, dried prunes, cultivated blueberries and avocados account for the rest. 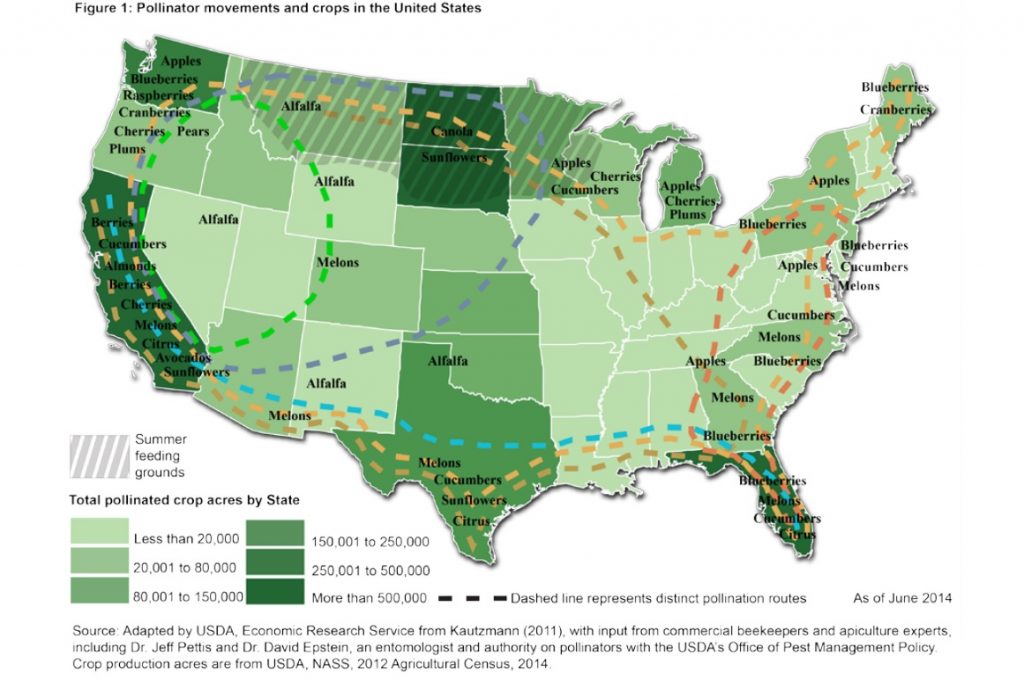 4. The U.S. is enduring a honey-laundering crisis

Is it honey or is it corn-syrup in a plastic bear disguise? Honey is the victim of a long-running scam in which processors have sold imitations that might look and taste similar, but are actually cut with sugar or syrup.

China is at the epicenter of this con, and some producers there have even gone through other countries and relabeled the product to avoid scrutiny. Launderers have gone so far as to filter out all the bee pollen, which is essentially honey’s fingerprint – the only way the federal government can track its origins.

On the flip side, missing pollen is not evidence that the honey has been doctored. Legitimate packers also filter the microscopic traces from their product because it helps prevent crystallization.

There are three main reasons why honey solidifies in its jar, though it rarely spoils, so don’t throw it out unless you’re sure it’s gone bad!

The first reason involves the sum of its parts. Water makes up a little less than a third of honey, and the rest should be glucose and fructose. Glucose is less soluble than fructose, so if there is more of it, it will separate from the water faster and form crystals. But here’s the cool part: this proportion is partially contingent on the source of the nectar. If, for example, the nectar came from lavender, which has more glucose, it will crystallize faster. If it comes from a tulip, it will be slower. (Common clover honey crystallizes rapidly).

The speed of crystallization also depends on how much the honey was processed. The more it was filtered, the less likely it is to carry tiny catalysts, like wax, wings and pollen, which encourage crystallization. Sometimes it’s also heated to remove those particles. That’s why raw honey, which is usually unheated and less filtered than commercial honey, is more likely to crystallize.

Honey storage, including its container and temperature, can also affect the pace. Honey resists crystallization the best at warmer temperatures around 77 degrees F, and in glass or a container that won’t let moisture in. If stored properly, it can last an eternity.

6. Flowers and honey bees have an epic love story

Flowering plants recognized that it was easier to rely on bees than wind to transfer their pollen during the Cretaceous period 130 million years ago. According to Tammy Horn, author of “Bees in America,” flowering plants “developed colors and petal patterns to attract insects…In addition to pollen, flowers eventually produced nectar, providing carbohydrates to their winged vectors…the honey bee developed its morphologies specifically to collect pollen and nectar such as increased fuzziness, pollen baskets, longer tongues, and colonies to store supplies.”

While some of those bees have gone extinct, the ones that exist now have become partial to flowers that have a landing platform and a secret ultraviolet nectar guide that humans cannot see.

7. Killer bees are not as deadly as they sound

Cue the Jaws theme song: killer bees, which are also called Africanized bees and are a hybrid of African and European bees that escaped from a science experiment in Brazil in the 1950s, have embarked on a slow coup in the American Southwest. They don’t look much different from other bees, nor are they any more poisonous, but they attack in swarms and chase their target. What’s worse: It’s hard to tell them apart from any other bee.

But as they get more attention, it’s helpful to remember that like with shark attacks, it’s extremely uncommon, for any bee encounter, not just with killer bees, to turn fatal. There are more than 60 million people in the territories killer bees have invaded, but there have been no more than a couple dozen deadly attacks. And some experts say that since killer bees seem so resilient, they could help revive the country’s bee population.

Have you heard that eating local honey will help your allergies? Unfortunately, there’s no scientific evidence that proves it. The springtime flowers that bees pollinate aren’t usually the ones making the assaults on the nasal passage and tear ducts. You can blame weeds and grass for that.

Furthermore, the pollen that ends up in honey is incidental and minimal — less than .5 percent — which is “not enough to impact the nutrient value,” according to the National Honey Board. Regardless of the pollen potency, honey is packed with all kinds of vitamins and minerals and antioxidants, and people have been using it for medicinal purposes, often to treat wounds and inflammation, since the Stone Age.