8 things you didn’t know about doughnuts

June 5 marks one of America’s sweetest holidays: National Doughnut Day. The day, which was created in 1938, commemorates the volunteers who brought doughnuts to soldiers on the front lines of World War I.

We dove into the doughnut’s origins, its surprising role in multiple U.S. wars and the health information that no one wants to admit.

1. Their origins are unclear.

Some form of the doughnut exists in dozens of countries around the world, but the exact time when doughnuts first came to the U.S. is unknown. Most accounts point to the Dutch “olykoek,” literally meaning “oily cake,” as the likely ancestor to the American doughnut, and theorize that Dutch settlers brought the dessert to North America in the 17th century. “We’ll probably never get to the bottom of where, exactly, they came from,” Adam Sobel, chef of NYC-based Cinnamon Snail Vegan Foodtruck, said. 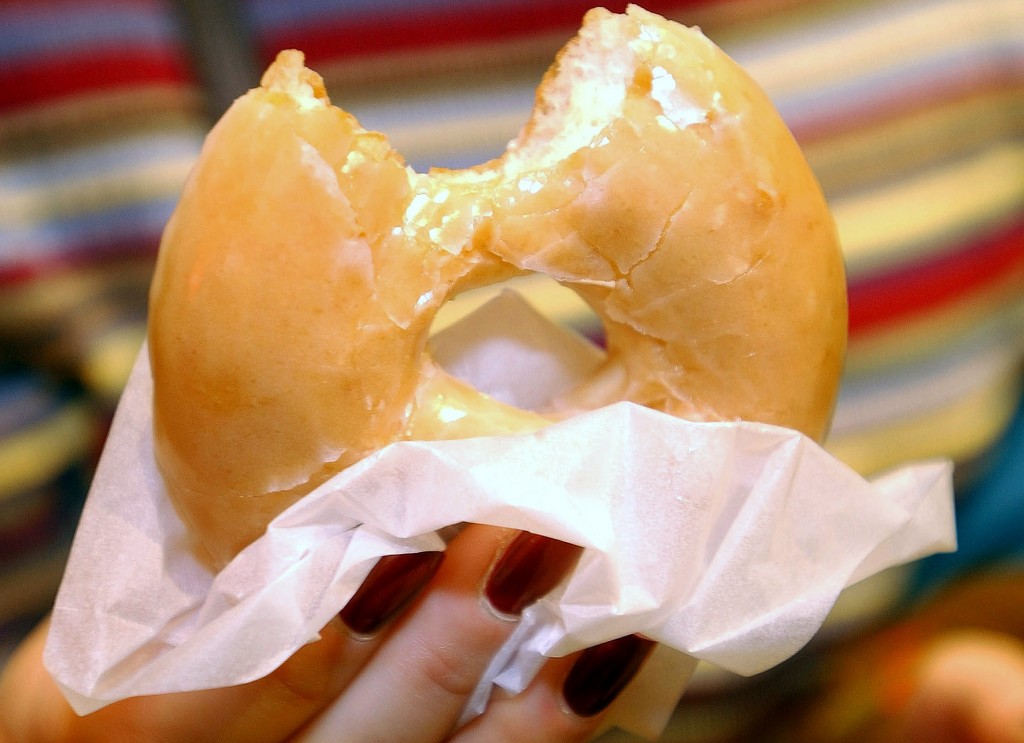 A customer samples a doughnut at the opening of a Krispy Kreme at Harrods in London, Oct. 3, 2003. Photo by Reuters

2. The hole in the center was likely inspired by indigestion.

The invention of the doughnut’s center hole is largely credited to Hanson Crockett Gregory, a New England sailor born in 1832. Gregory’s mother Elizabeth regularly made doughnuts for him and his crew to enjoy at sea, but their centers were never fully cooked, leading Gregory to eat raw dough. According to one story, Gregory decided to fix the issue by removing the doughnuts’ center. He told a newspaper in 1916 that he had invented the hole in 1847:

Well, I says to myself, “Why wouldn’t a space inside solve the difficulty?” I thought at first I’d take one of the strips and roll it around, then I got an inspiration, a great inspiration.

I took the cover off the ship’s tin pepper box, and — I cut into the middle of that doughnut the first hole ever seen by mortal eyes!

Other stories suggest a different origin; one states that Gregory came up with the idea when his ship hit a storm and he shoved the doughnut he was eating on a spike in the wheel, creating the hole.

3. They have been at the center of at least one controversy.

A Krispy Kreme store in the UK gained some unwanted publicity in February when it advertised a weekly children’s program that it dubbed “Krispy Kreme Klub Wednesday,” shortened to “KKK Wednesday.” After people complained that the name was jarringly similar to the Ku Klux Klan, the chain issued an apology, saying it had been unintentional, The Guardian reported.

Krispy Kreme hull is advertising KKK Wednesday. I don't know. I do not know. pic.twitter.com/19pXLFxXsw

4. They were a point of contention between U.S. soldiers and the Red Cross in World War II.

During the war, the Red Cross served free coffee and doughnuts to soldiers stationed overseas at “comfort stations.” At the time, British soldiers had to pay for the doughnuts while Americans got them for free, according to NPR. The difference caused tension between the soldiers, and in 1942 the Red Cross started charging everyone for the doughnuts, causing an upset among U.S. soldiers. 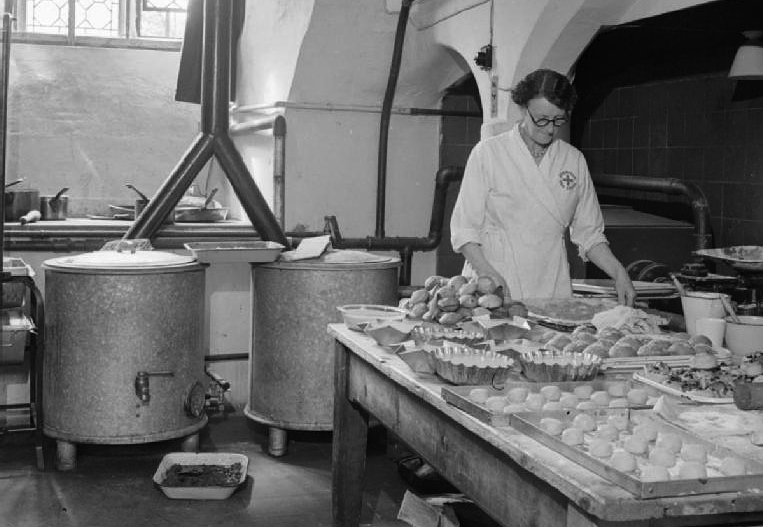 In the 600-year-old vaulted kitchen of the American Red Cross Service Club at the Bishop’s Palace in Norwich, England, Mrs. Babstock the cook sets out doughnuts, cakes and pastries, ready to serve to the hungry American service personnel staying at the Club, in this 1943 photo.

Brown University hosts a Naked Donut Run at the end of each semester during finals period in which naked students hand out doughnuts to their peers studying for exams in the library. Campus police who were unaware of the tradition halted runners in 2010 but eventually let them continue, according to the Brown Daily Herald.

6. A prisoner of war introduced National Doughnut Day to Vietnam with a prank.

In 1966, Marine Capt. Orson Swindle was a prisoner of war for the North Vietnamese army. During his captivity, one of Swindle’s captors taunted him about the U.S.’s short history and lack of major holidays in comparison with Vietnam’s long legacy. Swindle responded by saying that, in fact, National Doughnut Day was a major American holiday and celebrated on Nov. 10. To honor the holiday, the North Vietnamese served their American prisoners of war doughnuts on Nov. 10 of that year, which was actually the birthday of the U.S. Marine Corps. 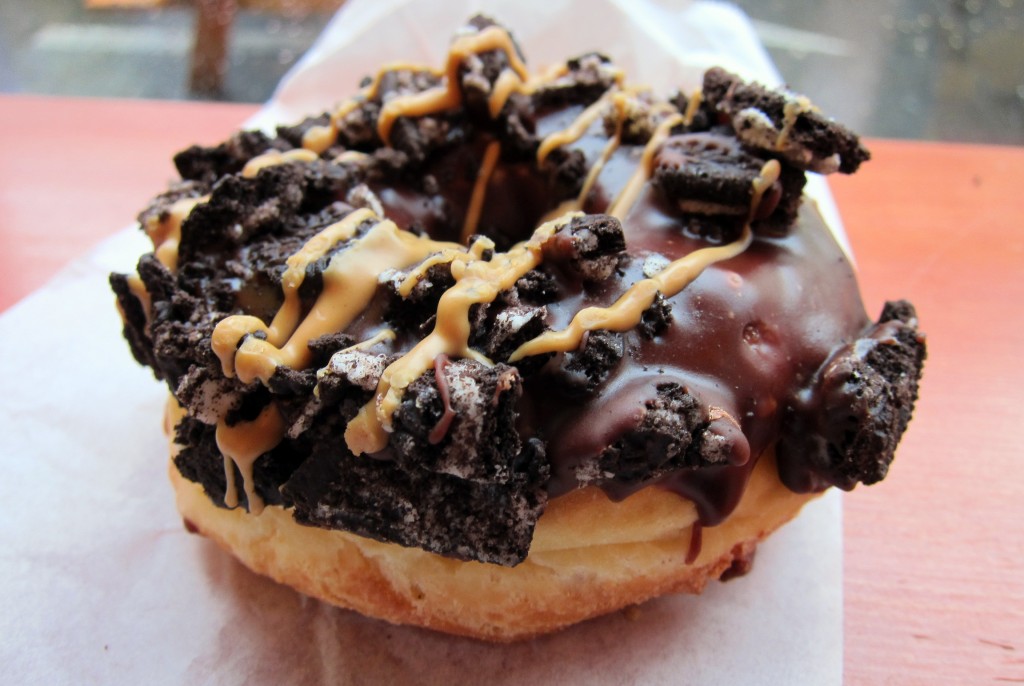 7. There are even more kinds of doughnuts than you think.

Chefs in the U.S. have used the doughnut as a canvas for some elaborate creations, including the taco doughnut, grilled cheese doughnut, foie gras doughnut, pork and seaweed doughnut, doughnut burger and many, many more. Jason Toner, kitchen manager at Sticky Fingers bakery in Washington, D.C., said one of his best creations was a Take 5-inspired doughnut, while pastry chef and RareSweets founder Meredith Tomason said her bakery’s lavender cream-filled doughnut was particularly popular. 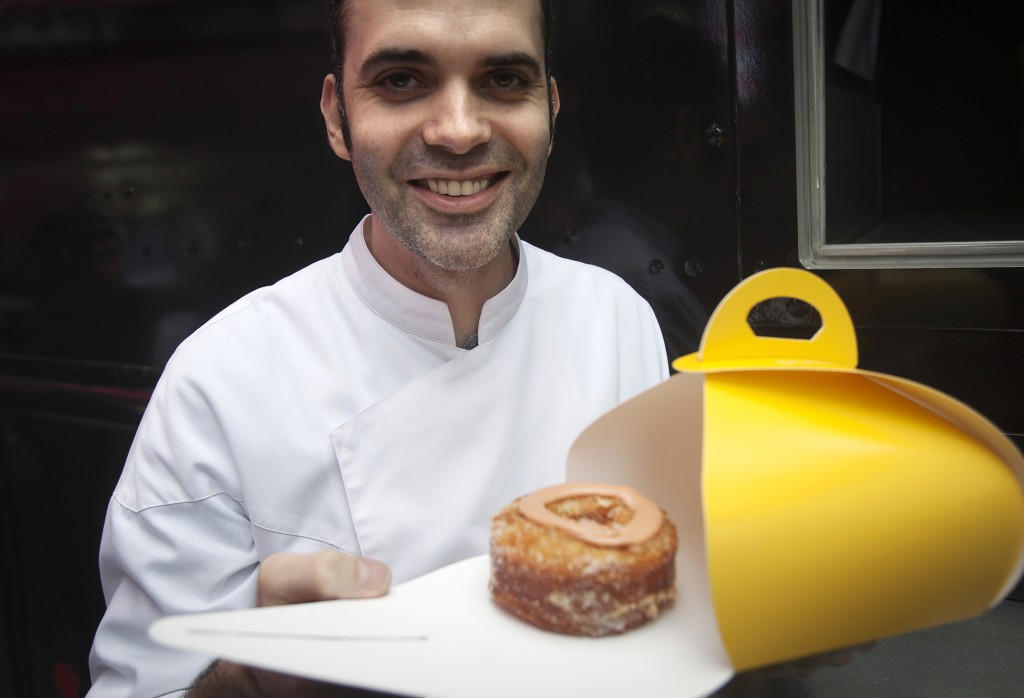 Celebrity baker Dominique Ansel, creator of the cronut, poses for a photo during a publicity event in Times Square in New York Dec. 28, 2014. Photo by Carlo Allegri/Reuters

8. Some kinds are, well let’s face it, deadlier than others.

One doughnut measuring roughly three inches across contains about 200 calories, according to the U.S. Department of Agriculture. But some doughnuts have a much higher calorie cost. Pastry chef Dominique Ansel dominated headlines last year with his invention of the “cronut,” a trademarked croissant-doughnut combination that had hundreds of people crowding his New York City bakery at the crack of dawn. Women’s Health Mag estimates that cronuts contain 1,330 calories; in comparison, the average adult should consume 1,600 to 2,400 calories every day.

In spite of the health drawbacks to doughnuts, people continue to love them, chef Adam Sobel said. “There’s something magical about eating fried dough.”