8 things you didn’t know about Halloween

1. It was the baby boomers who made trick or treating what it is today.

A movement to start trick or treating began in the late 20s and early 30s. But, according to Susan Whiteside of the National Confectioners Association, it wasn’t until post-World War II and the end of sugar rationing that it really took off.

As a result, baby boomers are the first generation to have trick or treated both as kids and also grandparents.

Halloween was once considered a kids-only holiday with apple bobbing and taffy pulls. But as it evolved with the boomers, it’s become both an event popular with families and adults.

2. Vampires legends come from corpses dug up in the Middle Ages.

Myths of classic blood-sucking monsters were likely linked to diseases that spread through Europe in the Middle Ages, according to Matt Kaplan, science correspondent for The Economist and author of “The Science of Monsters.” People visiting loved ones on their deathbeds picked up lethal diseases like tuberculosis and mysteriously died weeks later, he said. Without modern epidemiology, it was unknown how the illnesses had spread.

Occasionally the bodies were dug up. And the stages a body goes through as it decomposes combined with the mysteries of the disease itself may have given rise to common vampire and monster traits.

“If you take a corpse and you let it sit in the ground, the bacteria inside are still having a fiesta,” Kaplan said. “They’re producing gases, and they can push vital fluids past the mouth. It looks like the teeth are stained with blood. No one had really looked at that before. And people were freaking out over the concept of something coming back from the dead.”

Decaying skin pulled away from the teeth and nails may have looked like claws and fangs, he added. And gases moving around inside the body gave the appearance of “breathing.”

Vampires in contemporary pop culture are often demonic aristocrats or people plagued by a virus. But in the 1600 and 1700s, it was believed that people became vampires because they had been criminals in life or had done sinful things, said Titus Hjelm, lecturer at University College London. And believe it or not, some evidence for vampire hunters exists. Archeologists recently unearthed decapitated bodies — skulls with bricks shoved in their mouths and skeletons with stakes through their chests — in medieval graves of Bulgaria and Poland. These “deviant burials” could have been suspected vampires, but we will never know for sure, Hjelm said. 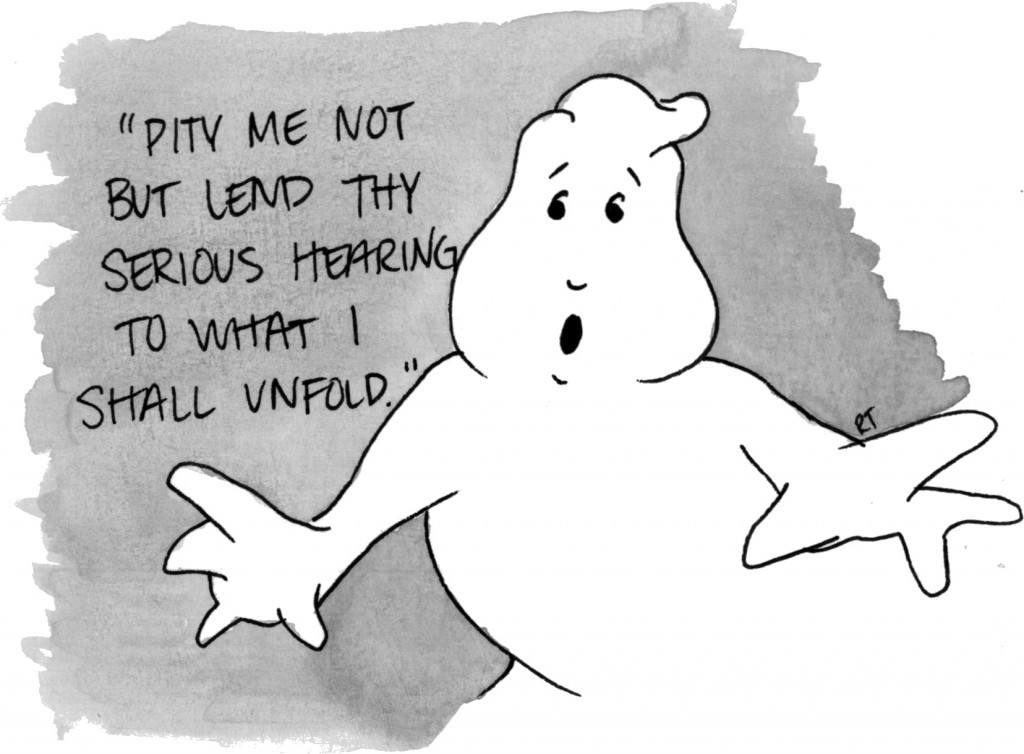 4. If your house is haunted, you just might be able to back out of your contract.

Caveat emptor (“Let the buyer beware” in Latin) is a principle of common law relating to the sale of property. It means that if a buyer purchases property, they do so at their own risk. In 1991, a New York court of appeals found reason to challenge the principle — over a haunted house.

In 1989, Helen Ackley repeatedly described seeing ghosts in her Nyack, New York home to Readers Digest and local media. But when she sold the house, she hid its haunted history from the buyer, Jeffrey Stambovsky, who put down a $32,500 payment. When Stambovsky learned it was believed to be haunted, he attempted to back out of the sale. Ackley refused, and he sued. A trial court dismissed the action, but Stambovsky appealed, and a New York appellate court ruled that Ackley might have a point. The case traveled through the court system. And while the New York court has no records of the final ruling, the appellate court documents quote both Hamlet and Ghostbusters.

Halloween is associated with costumes, candy, mischief and spooky, supernatural phenomena. But that wasn’t always the case, according to Nicholas Rogers, a history professor at York University and author of “Halloween: From Pagan Ritual to Party Night.”

Halloween falls on the eve of All Saints’ Day within the Roman Catholic Church. But after Scottish and Irish immigrants moved to the United States and Canada in the late 1800s, it started to lose its Christian connotations. As the holiday became more of a fixture in popular culture, it became more commercialized and secular, Rogers says. People played games to foretell the future, including interpreting the shape of uprooted cabbage stems to predict a future husband’s character, or finding a potato with a hidden ring or sixpence that guaranteed a year of good luck.

6. The U.S. Defense Department has a zombie apocalypse plan

The document is called “CONOP 8888” and known internally as “Counter-Zombie Dominance.” On the second page, there’s a disclaimer that explicitly states that “this plan was not actually designed as a joke” but instead as a creative way to train students about city protection in the military’s Joint Combined Warfighting School.

When instructors train students about protecting citizens during warfare, they’re careful about writing hypothetical situations into their lessons, reported Foreign Policy. Rather than risk political fallout from writing a “fictional ‘Tunisia’ or ‘Nigeria’” into their lessons, they “elected to use a completely-impossible scenario that could never be mistaken as a real plan.”

Apparently, because the plan is so ridiculous, it actually serves as a better teaching tool for military planners.

7. ‘War Of The Worlds,” a “real-life” scary story, did not actually cause widespread panic

It’s been 76 years since radio host Orson Welles’ broadcast the notorious drama “War of the Worlds” over the airwaves. War of the Worlds was a fake news broadcast that warned Americans of a worldwide alien invasion. Reports at the time said the radio drama caused widespread panic for more than a million people, later launching debates over abuse of the media. But more recent reports say it didn’t reach nearly as many as originally reported.

In an article for Slate, Jefferson Pooley, an associate professor of media and communication at Muhlenberg College, and Michael Socolow, an associate professor of Communication and Journalism at the University of Maine, say the “panic” was in fact so miniscule that it was “practically immeasurable” the night of broadcast. A ratings service polled 5,000 households that night for a radio audience survey and only two percent of responders said that they were listening to the program.

So if only 100 households out of 5,000 polled said that they were listening, how did the drama cause widespread panic? “

At the time, print media was feeling pressure from radio as a competitor and feared radio was becoming the “go-to source for news and advertising.” Under that pressure, newspapers “pummeled” radio, rebuking it as an untrustworthy medium.

8. Pumpkin carving was an Irish tradition that helped save small American farms

Before the 19th century, Irish carved turnips into lanterns during the Celtic festival of Samhain, believing that the light would keep the spirits away from their homes. When waves of Irish immigrants moved into American cities, the pumpkin became a natural substitute. Pumpkins had always been a symbol of American abundance, growing out of control like weeds. But by the 18th and 19th century, they weren’t a popular food, says Cindy Ott, author of “Pumpkin: The Curious History of an American Icon.” Irish immigrants brought the pumpkins inside as decoration, giving them faces and spooky personas as part of a parlor game.

“It’s that popularity of the jack o’lantern and [pumpkin] pie that helped rejuvenate the small farm,” Ott said. “(Harvesting pumpkins) was a laborious thing to do in 1742 but now it’s a form of recreation.”