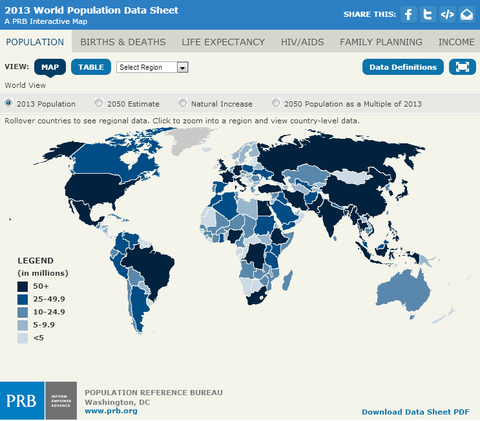 Click on the image to go to a interactive map by the Population Reference Bureau.

The Population Reference Bureau (PRB) released their “2013 World Population Data Sheet” on Thursday revealing that sub-Saharan Africa, one of the poorest regions in the world, will see the fastest rates of population growth.

According to a PRB press release, senior demographer Carl Haub said, “The projections that we cite assume that family planning will become more widespread. If not, Africa’s population will grow more rapidly, further constraining efforts to address poverty, create jobs, and protect the environment.”

The infographic above highlights key population trends in our 2013 World Population Data Sheet, and the numbers behind them. The map allows you to compare 18 indicators. You can also read the full PRB report.