Amid furor over monuments, Trump seeks `garden’ of U.S. heroes

WASHINGTON — President Donald Trump has a vision for his second term, if he wins one, of establishing a “National Garden of American Heroes” that will pay tribute to some of the most prominent figures in U.S. history, a collection of “the greatest Americans to ever live.”

His idea, conveyed in a speech Friday night at Mount Rushmore and expanded on in an executive order, comes as elected officials and institutions are reckoning with whether it is appropriate to continue to honor people, including past presidents, who benefited from slavery or espoused racist views, with monuments or buildings and streets named after them.

The group of 30-plus features Founding Fathers and presidents, civil rights pioneers and aviation innovators, explorers and generals.

Absent from Trump’s initial list are any Native American, Hispanic or Asian-American individuals. The White House and Interior Department declined to comment on how the list was assembled.

To be certain, the monument is far from a done deal and Trump’s plan could be dashed if presumptive Democratic nominee Joe Biden denies him a second term in November or Congress balks at allocating funding for the project.

But Trump also is looking to put an ideological stamp on the idea of American greatness with the inclusion of conservative stalwart Antonin Scalia, the late Supreme Court Justice.

Trump in recent weeks has repeatedly condemned the desecration and toppling of historic statues by demonstrators during protests over racial injustice and police brutality following the death of George Floyd in Minneapolis. 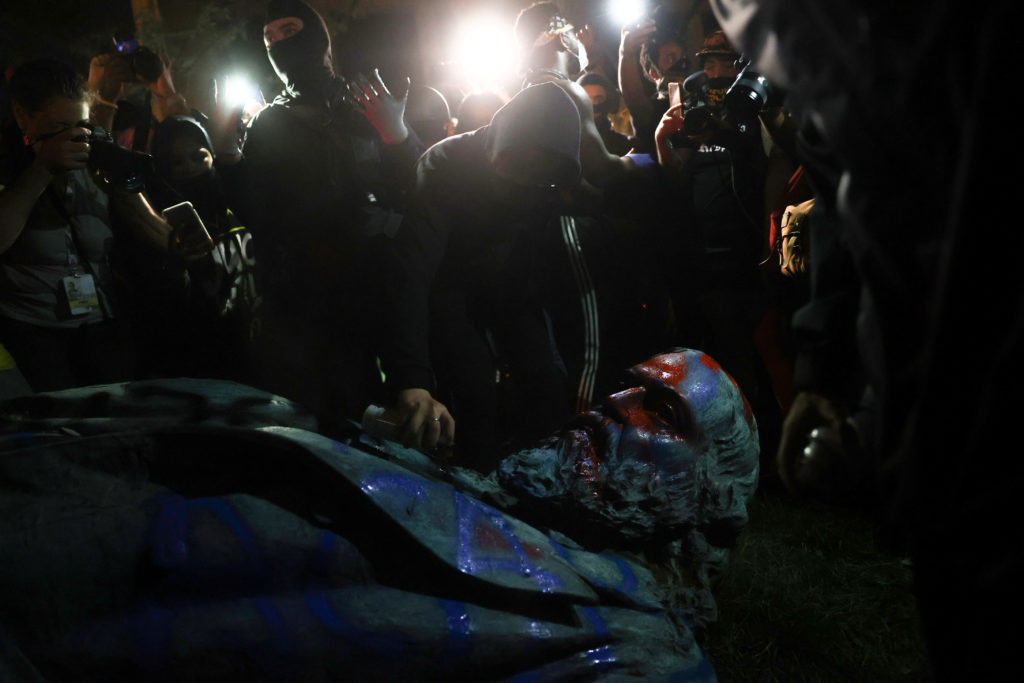 Protesters spray paint on the toppled statue of Albert Pike during an event to mark Juneteenth, which commemorates the end of slavery in Texas, two years after the 1863 Emancipation Proclamation freed slaves elsewhere in the United States, amid nationwide protests against racial inequality, in Washington, U.S. June 19, 2020. Photo by Jonathan Ernst, Reuters.

“We will raise the next generation of American patriots,” Trump said at Mount Rushmore. “We will write the next thrilling chapter of the American adventure. And we will teach our children to know that they live in a land of legends, that nothing can stop them, and that no one can hold them down.”

His executive order says the garden should open before July 4, 2024, and he leaves it up to a federal task force to make recommendations about the use of federal money and a proposed site. The order specifies “a site of natural beauty” that is near at least one major population center.

The order says priority should be given to monuments to former presidents, to individuals and events relating to the discovery of America, the founding of the United States, and the abolition of slavery. “None will have lived perfect lives, but all will be worth honoring, remembering, and studying,” according to the order.

The order includes language to make clear that non-U.S. citizens who played significant roles in American history also could be honored in the garden. 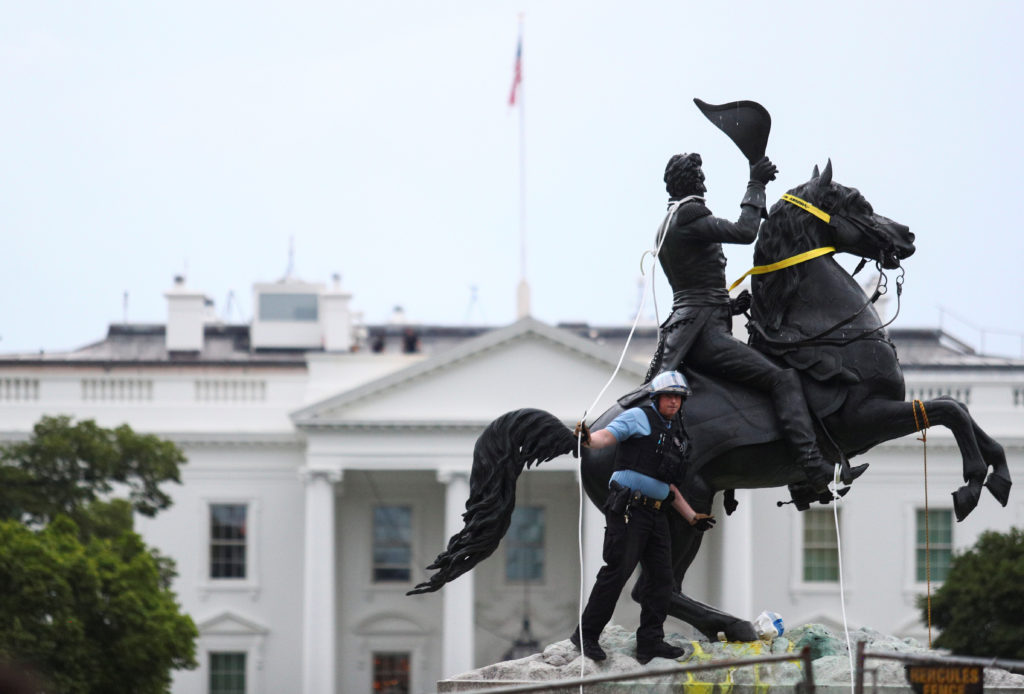 A U.S. Park Police officer removes ropes and chains from the statue of U.S. President Andrew Jackson in the middle of Lafayette Park across from the White House after a group tried to tear down the statue during racial inequality protests in Washington, D.C., U.S., June 22, 2020. REUTERS/Tom Brenner

As examples of individuals who made substantive contributions to America’s public life or otherwise had a substantive effect on America’s history, it cites: Italian explorer Christopher Columbus; Junipero Serra, a Roman Catholic priest who established Spanish missions in California; and the Marquis de La Fayette, a French officer who fought in the American Revolutionary War.

A statue of Columbus, who has been criticized for brutal treatment of Native Americans, was removed this past week from outside the city hall in Columbus, Ohio. Last month, protesters toppled a statue of Serra in San Francisco’s Golden Gate Park. Some historians say that Serra, who was canonized by the Catholic Church, had a mixed history that included him acting as an agent of the Spanish Empire’s colonization efforts in the 18th Century.

Trump on Friday again lashed out against a “left-wing cultural revolution” that he says is teaching American children “that the men and women who built” the country “were not heroes, but that were villains.”

“The radical view of American history is a web of lies — all perspective is removed, every virtue is obscured, every motive is twisted, every fact is distorted, and every flaw is magnified until the history is purged and the record is disfigured beyond all recognition,” Trump said.