When staff suggested that Abdallah Higazy, the principal of a Muslim elementary school in Pennsylvania, keep a gun handy to protect the students from a potential hate crime, Higazy winced.

As a Muslim from Egypt who was framed as a terrorist in the U.S. and spent a month in maximum security prison soon after Sept. 11, Higazy has seen firsthand the damaging effects of nativism. Though he never could have anticipated what this year’s election has evoked when he accepted the position in Mechanicsburg two years ago.

Presidential nominee Donald Trump has called for “a total and complete shutdown of Muslims entering the U.S.,” because “our country cannot be the victims of horrendous attacks by people that believe only in Jihad.” His stance has inspired nationalists who support him to harass and attack ones who are here.

Fifteen years after the Sept. 11 attacks, Higazy and others say that because of these kinds of statements, the second generation of Arab-Americans are growing up with more racism and bigotry now than what they faced in the immediate aftermath of the attacks.

The New York Times also reported today on a study that says the number of hate crimes against Muslims in the country last year were the highest they’ve been since 2002.

Instead of a gun, because “kids are very good at finding stuff,” he took advice from the sheriff’s department to give each teacher a baseball bat.

“Parents started saying that some of the people that support Trump might feel like they’re doing something patriotic by attacking Muslim children,” he said. “We would like to defend ourselves…just in case.”

A false accusation — and the fallout

Muslim mosques, schools and families in the past year have also been building fences, installing surveillance cameras and having daily conversations about how to protect children – something that was not as ubiquitous 15 years ago, several parents told the NewsHour. Higazy said there were people who were “generally jerks,” who would give him dirty looks, but it didn’t happen often and it appeared harmless. Now, physical safety is a concern for his students.

Higazy said there are usually two ways that people within the community cope with this fear. Some choose to only socialize with other Muslims, whereas others believe that Islam is inclusive and want to reach beyond their own community. “We are more of the second mentality,” he said.

While lessons about prejudices and racism, freedom of expression and religion are a part of life for most, Higazy is acutely versed.

Fifteen years ago, he was staying on the 51st floor of the Millennium Hotel across the street from the World Trade Center as a temporary dorm while earning a computer engineering degree in Brooklyn when the planes crashed and he had to evacuate.

When he returned to the hotel in December to pick up what he had left behind, he was greeted by the FBI.

The security team there had told the FBI that it found in Higazy’s room a Koran and an aviation transceiver, a radio used to communicate with airplanes from the ground. 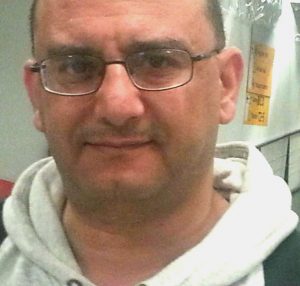 Higazy, who used to be a Lieutenant with the Egyptian Air Force, was thrown into solitary confinement. He asked to take a lie detector test but was coerced – or bullied, depending on the source – into a false confession that the radio belonged to him at the end of a three-hour session. Prosecutors brought their statement before U.S. Federal Judge Jed Rakoff, saying that Higazy confessed to previously lying to the FBI about owning the radio and hypothesized that he did it to cover up that he used it to guide the planes into the Twin Towers.

Rakoff detained him without bail.

Three days later, the pilot who had actually left the radio at the hotel tried to retrieve it. Then, a security guard admitted that he had lied about finding the radio at all, let alone in Higazy’s room.

Rakoff ordered an investigation into how the FBI obtained the confession. After he found that the FBI did not act outside of its legal boundaries, he wrote an article why polygraphs are used not for their reliability, but to try to elicit confessions. He also recently told NewsHour that Higazy was a victim of “plain old racism,” but a lucky one.

It was a case of “a perjurious hotel employee (who appears to have been motivated by anti-Arab sentiment) and an FBI agent and federal prosecutor who, in the wake of 9/11, were too quick to jump to conclusions,” he wrote in an email to the NewsHour.

The biggest lesson, from Rakoff’s perspective, is not to let current events, “even terrible events like 9/11,” affect criminal investigations or how the justice system operates.

“It was very lucky in Higazy’s case that a tragedy was avoided,” he wrote.

A ‘national climate of fear’ in the U.S.

Arab and Muslim Americans have been unfairly targeted by police since 9/11, the ACLU claimed in a lawsuit it filed against New York City in 2013.

Without evidence of wrongdoing or warrants, New York police mapped out Muslim communities and mosques, put them under surveillance and entered the information into a database, the ACLU claims.

Earlier this year, it issued plans for a settlement that establishes reforms designed to protect people from discriminatory surveillance if enacted – including the prohibition of using race or religion as a motivating factor for investigation.

These investigations have instilled a different kind of fear over the years into the communities that are already targeted, in the classroom and elsewhere. And this is a catastrophe that has continued to worsen during this year’s election cycle, said ACLU Director of the National Security Project Hina Shamsi.

“A national climate of fear is now exacerbated to an unprecedented degree by political rhetoric,” Shamsi said.

Higazy only saw the man who framed him once, when he was tried for perjury and sentenced to six months of weekends in jail.

“I just looked at him, and there were so many things I wanted to say, but I just decided to be quiet because it wasn’t even worth it,” he said. “If I never see [him] again it’d be too soon.”

After seven years of court battles, he won a $250,000 settlement from the U.S. government in a civil suit, though the government did not admit any wrongdoing or liability.

Now Higazy isn’t just worried about perjurious patriots — he’s worried about violent ones. He knows his students will eventually experience bigotry, hatred and racism, that has been stewing since 9/11. And He knows his son, who was born in Brooklyn, will too.

That’s the hardest part, according to Linda Sarsour, the Executive Director of the Arab American Association of New York, an outspoken Muslim and Arab American who fields daily doses of racism and bigotry for it.

“As an organizer and an advocate, that’s actually been the most difficult part, is to explain to my kids why – why no one is held accountable,” said Sarsour. “This is the only America that they know.” 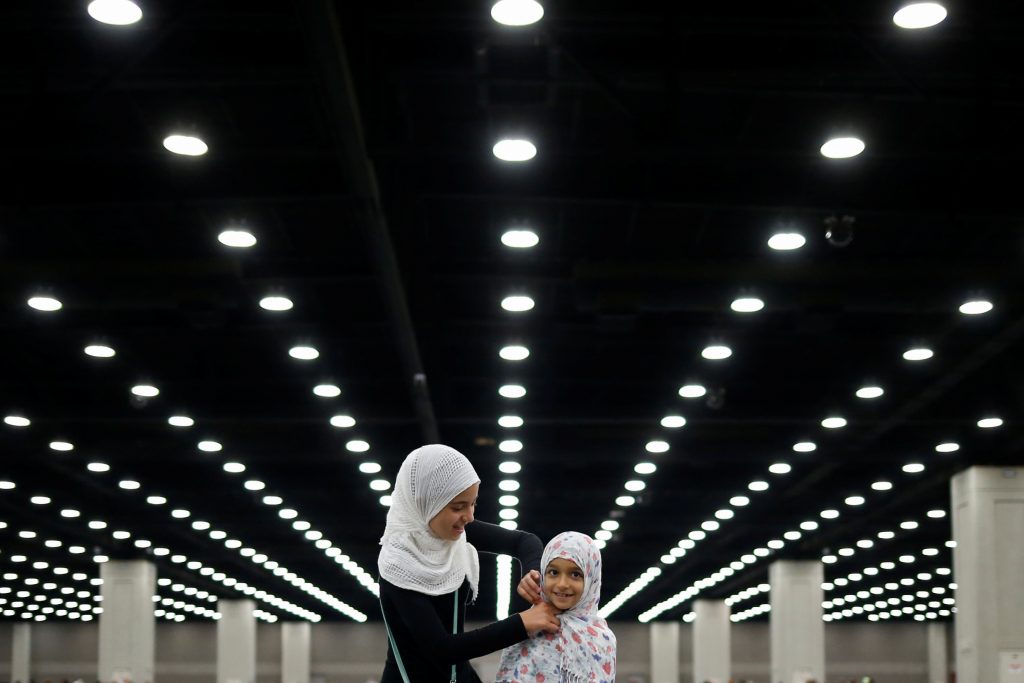 Salma Selenica, 12, left, adjusts the headscarf of her sister Layla, 8, ahead of the jenazah, an Islamic funeral prayer, for the late boxing champion Muhammad Ali in Louisville, Kentucky, on June 9, 2016. Photo by Adrees Latif/Reuters

What young Muslims are hearing at school

Sarsour is a Palestinian who was born in Brooklyn and never felt like she stuck out until September 12, 2001. Despite her awareness of anti-Arab prejudice, she still felt sideswiped when she heard what happened to her son.

She was looking through his application for high school while they were riding to his interview. It included an essay from his English class. He wrote about when a classmate said he was good at math because, “Muslims make bombs.” And her son, a sports car fanatic, decided not to react, likening that decision to making a pit stop on a race track.

“Like a mental pit stop. He could have responded in so many different ways, but he didn’t respond at that moment,” Sarsour explained. “He also chose not to tell me. God only knows what else goes on.”

These kinds of scenes are common. Muslims are “the most targeted group in schools,” along with people within the LGBTQ community, according to Hussam Ayloush, an executive director at the Council on American-Islam Relations (CAIR).

Late last year, CAIR released a report in California that surveyed more than 600 Muslim children and found that 55 percent of them are bullied, more than twice the national average.

Ayloush said parents often ask him to convince their children to mask their religion by taking off their headscarves or shaving their beards, but he believes exposure is better than trying to avoid conflict.

“I actually tell people the way we address fear of Muslims is by making sure that Muslims are more visible, more engaged and more known,” he said. “There’s no way to defeat a phobia except by subjecting the person who suffers from it.”

Ayloush was born in Lebanon to Syrian parents and emigrated as a teenager during civil war to the U.S, where he naturalized and met his wife, a Mexican American. They have five children.

Trump has vowed to build a wall between Mexico and the U.S., and has made racist comments, including one that discredited a federal judge overseeing one of his cases because he is Mexican.

A few months ago, Ayloush’s daughter in 4th grade was innocently teased in class and told that she would be the first to get deported if Trump were elected, since she is both Mexican and Muslim.

This article has been updated with information from a new report on hate crimes against Muslims.

Left: Young Muslims protest U.S. Republican presidential candidate Donald Trump before being escorted out during a campaign rally in the Kansas Republican Caucus at the Century II Convention and Entertainment Center in Wichita, Kansas, on March 5, 2016. Photo by Dave Kaup/Reuters