“Watching these images take me back to my parents’ stories,” says Vang Polly, daughter of Chef Genevieve Vang and Guy Vang of the popular Bangkok 96 restaurant in Dearborn, Michigan. Her mother was 8 years old when she fled Laos on a Boeing cargo plane after U.S. troops left the country.  “So many people were so scared and pushing their way into the plane. At one point, she [was] continuously trampled on, and she survived because of the leather suitcase on her back.”

U.S. officials have often stressed the U.S. exit from Afghanistan is completely different from the withdrawal from Vietnam, Laos and Cambodia in 1975, and while each situation has its own complex history and politics, many Vietnamese, Lao, Hmong, and Cambodian Americans see their own families’ journeys to America in the voyage Afghans are making now. They’re using decades of expertise advocating for refugee communities to make urgent humanitarian pleas to the U.S. government about the Afghans left behind and those resettling in the U.S., and using their own networks to help.

READ MORE:  ‘I feel so helpless.’ Afghans in the U.S. worry for friends and family back home

“There are certainly many differences between Afghanistan and Vietnam, from why the US went there, what happened, and why we are leaving,” said Dr. Tung Nguyen, president of The Progressive Vietnamese American Organization (PIVOT). “However, from the viewpoint of the typical Afghan person now and the typical Vietnamese person then, particularly those who bought into the dreams of freedom and democracy, there are similarities. In particular, the feeling and the fear that one’s life and freedom are under threat and beyond one’s control is a feeling that I had as a refugee in 1975 and which makes my heart break for the Afghan people in the same situation.”

Kham Moua, National Policy Director of Southeast Asia Resource Action Center (SEARAC), speaks to PBS NewsHour about how Southeast Asian American advocates are urging the U.S. government to not to repeat some of the same mistakes made in 1975.

In 1975, when the U.S. left Vietnam, it had little support for refugee resettlement.

That year, Congress passed the Indochina Migration and Refugee Assistance Act of 1975, which resettled 130,000 Southeast Asian refugees immediately and 300,000 Southeast Asian refugees from 1975 to 1979. The Refugee Act of 1980 raised the annual ceiling for refugees from 17,400 to 50,000, created a process for reviewing and adjusting the refugee ceiling to meet emergencies, and redefined “refugee” as a person with a “well-founded fear of persecution,” in line with the United Nations. According to the Southeast Asian Resource Action Center (SEARAC), 1.3 million Southeast Asians were resettled in the U.S. over the next three decades — it was the largest resettlement in the nation’s history.

“The people of Afghanistan deserve the same refuge during the crisis that befalls their country today,” said Quyen Dinh, Executive Director of Southeast Asia Resource Action Center (SEARAC) in a joint statement with Asian Americans Advancing Justice and Asian American Advocacy Fund to urge U.S. officials not to “repeat the mistakes” of the Southeast Asian refugee crisis.

The United Nations High Commission on Refugees (UNHCR) estimates that this year there will be more than half a million new Afghan refugees, on top of 2.2 million already in Pakistan and Iran. American resettlement agencies are preparing for tens of thousands of Afghan refugees expected to come to the U.S. this year.

READ MORE:  How you can help Afghan refugees arriving in the U.S.

Afghan families should be able to presume that they are welcome in this country and be able to focus on healing from the war, both body and soul, said Mee Moua, a retired Minnesota State Senator who now works as a racial healing racial equity consultant. She was also the first Hmong American elected to serve in any state legislature.

“The plight of the people in Afghanistan breaks my heart, especially the dire situation of those who are deemed to be pro-American because they provided support services to the U.S. military and are now abandoned by the U.S. government,” Moua said. “I see my family’s experience in the stories. I know their fears and feel their desperation as they try to survive the new government.”

Many Southeast Asian American organizations are offering recommendations and making urgent humanitarian pleas for how to best help the Afghan people based on their 46 years of experience.

“Today, the United States has the resettlement infrastructure in place to bring Afghan refugees to safety here in America as soon as possible,” Dinh said.

Dinh recommended that the U.S. immediately increase the refugee resettlement limit and not limit assistance to only translators and interpreters eligible for Special Immigrant Visa. Dinh also pointed specifically to Temporary Protected Status, a temporary designation that allows a country’s nationals to stay in the U.S. longer because of dangerous conditions in their country, as one way to achieve that. There are currently 12 countries with TPS but Afghanistan is not on the list.

In a statement issued on August 15, PIVOT urged the U.S. government to minimize the barriers for Afghan refugees to come to this country, particularly for those who are at risk for retribution due to their past relationship with the U.S. or the Afghan government. PIVOT also called the U.S. to work with countries surrounding Afghanistan to help them deal with the potentially large number of refugees. Most importantly, the organization recommended comprehensive resettlement plans for the refugees who come to this country that include assistance for food, housing, job training, healthcare, and education. 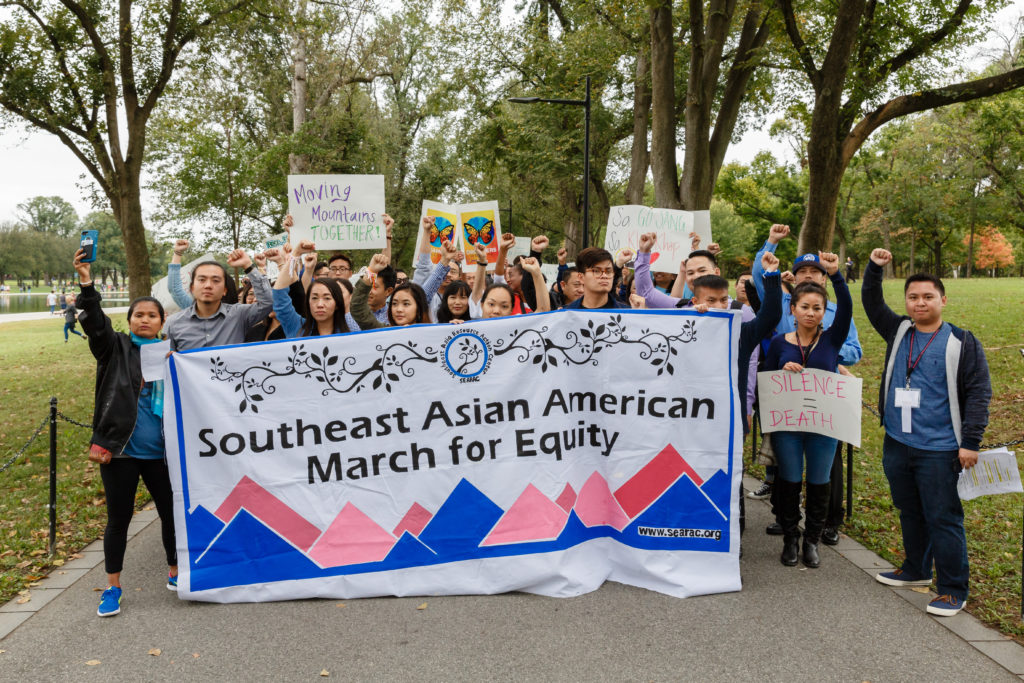 Many in the Southeast Asian American community who came to the U.S. during the 1970s are now settled and established enough to be able to give back and help this new group of refugees on an individual level, by hosting and sponsoring Afghan families, fundraising and donating, and helping Afghan families learn about living in America.

In Seattle, for example, a group of Vietnamese American friends are working with Afghan Health Initiative to try to find 75 Vietnamese American families to host or sponsor 75 Afghan refugee families. They are also fundraising, collecting donations and supplies, and recruiting volunteers. Recalling how in 1975 then Washington Governor Dan Evans stepped up to welcome Vietnamese refugees, these friends want to return the favor and honor that legacy.

Vang Polly says that she is fortunate to not have directly experienced what her parents and other Hmong Americans did at the end of the Secret War in Laos, but she knows their stories, and she sympathizes deeply with the Afghan people fleeing their country now. Her family recently decided to start sponsoring Freedom House Detroit, a Detroit nonprofit organization that helps asylum seekers and refugees.

Ultimately, the connection between refugees is a powerful one. Nguyen draws from his experience growing up as a refugee in California to offer some advice to Afghans coming to the U.S. today.

“Prepare for some culture shock and be flexible, especially when intergenerational conflicts arise,” said Nguyen. “Freedom for you also means freedom for your loved ones. Understand that survival guilt will be a part of your life and accept that you have undergone great trauma so you can get the help you need to be whole. Expect that life will be difficult economically, though perhaps in a different way than it was in Afghanistan. Take advantage of opportunities as they come up.”

“There is hate here, but there is also love and hope,” he adds.

Afghan children get left behind, go missing amid chaos at Kabul’s airport