In rural Alaska, embracing native culture during and after the school bell

The large kitchen and dining area of the Williams home in Dillingham, Alaska, is the center of activity after school. Sassa Williams, 18, and her siblings, triplets Theresa, Chris and Grant, 14, sit at the large table doing homework. Sassa, who is considering becoming a teacher, often gets out of her own chair and walks over to her brothers or sister when one has a question.

But there comes a time when the phone rings, and after a brief conversation, everyone, including mom Kim, who has been cooking dinner, stops what they’re doing. They go downstairs, out the door and drive to Kanakanak Beach a few miles away. The kids’ grandfather, William Johnson, has called in reinforcements to help bring in an unexpectedly large catch of smelt.

“It connects them with their grandma and grandpa and they’ll share it, and that’s part of who we are,” said Kim Williams. 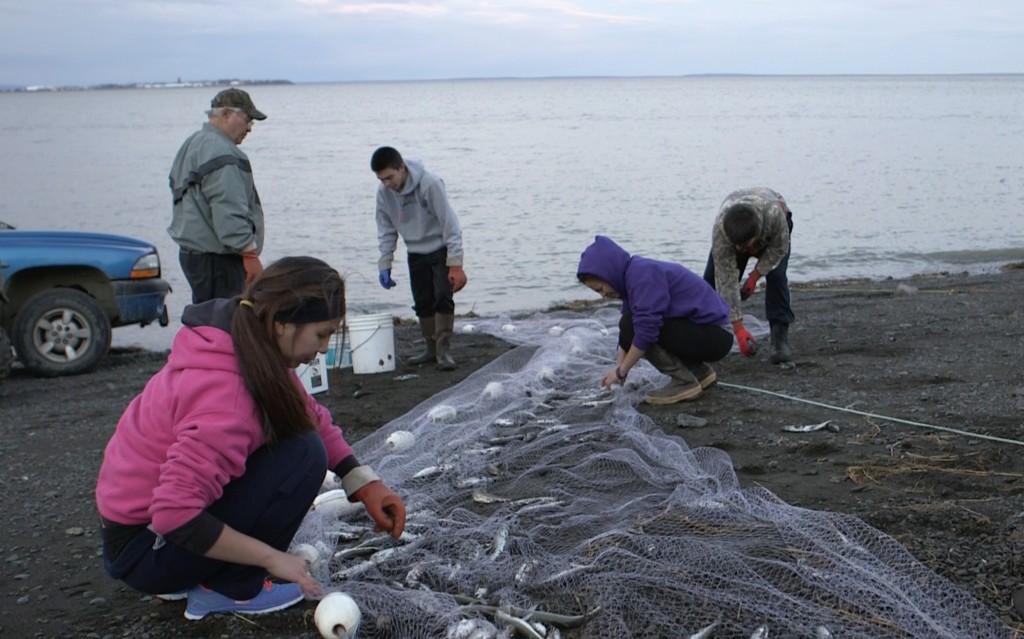 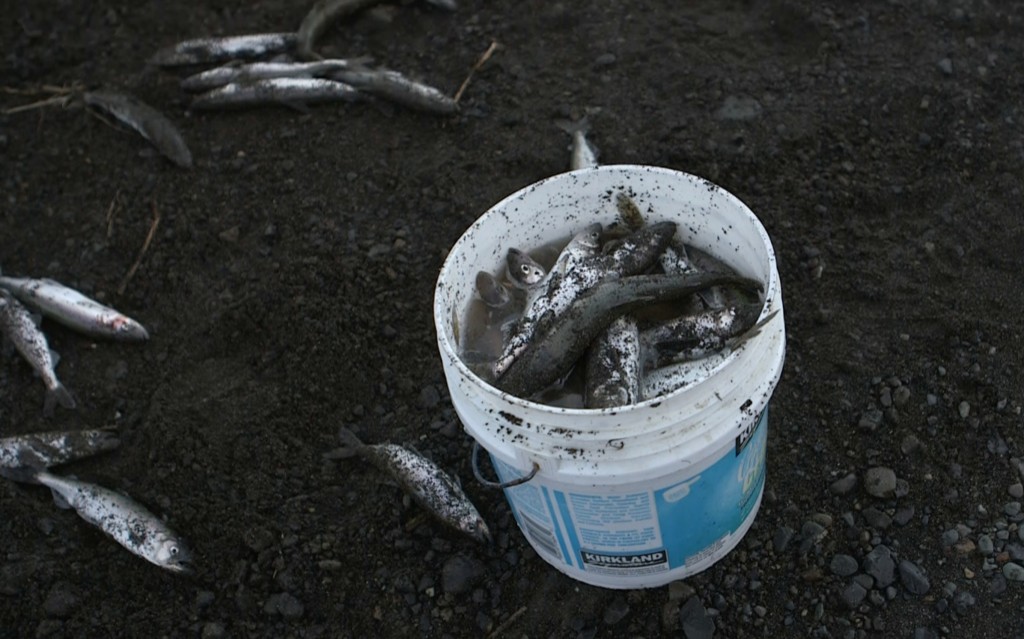 Williams and her family are Yup’ik, Alaska Natives that quite literally live off the land, carrying on subsistence traditions passed down from generation to generation.

In an era of grocery stores, pre-packaged meals, and a plethora of fast food outlets in most places, it is perhaps unusual for students to be helping catch their own dinner after school. But in Dillinhgam, Alaska, there are no pizza delivery chains or drive-thru burger joints. Food prices are high compared to those in the “lower 48” as they are called here. A package of fig newtons, for example, is more than $7, versus $4.50.

But none of those reasons are really why, in Dillingham, and many towns and villages across Alaska, subsistence living is still an important part of the culture. People here have been hunting and gathering their own food for centuries. And it sometimes becomes more difficult to balance education with long-held traditions that actually help feed families through the winter.

“This is a very tight-knit community and most people do the same thing in the summer,” said Sassa. “We all fish, we all go hunting, subsistence, moose and whatnot.”

Sassa spends time in the summer picking a variety of berries that are made into jam and akutaq, a fruit salad often sweetened with sugar and mixed with Crisco. The salmon the family catches at their subsistence cabin is also preserved for winter, and everyone has a role in that effort. 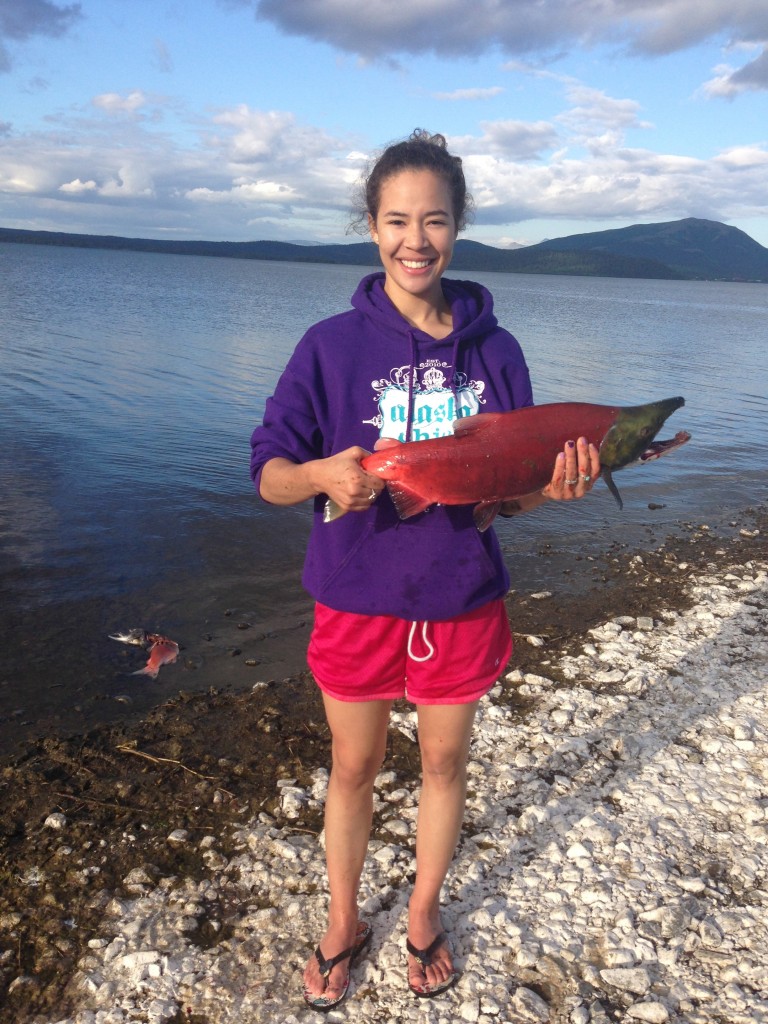 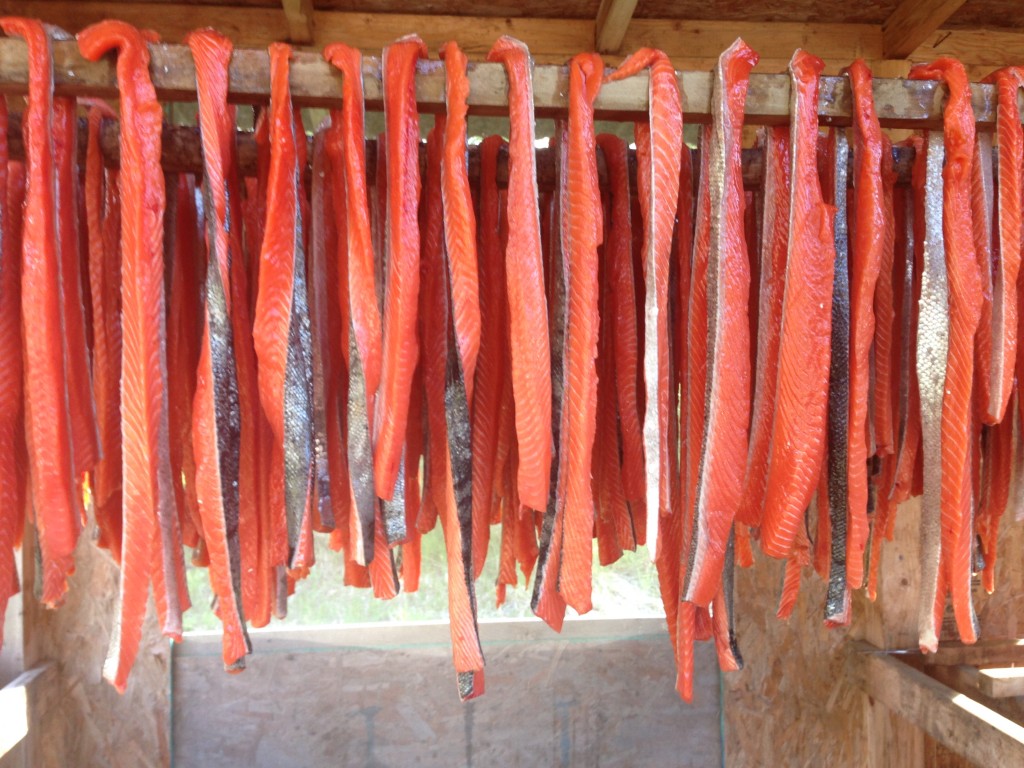 Salmon strips prepared by the Williams family will be smoked and preserved for the winter. Photo courtesy of Sassa Williams

“We have a smokehouse out there and we all work together out there to split fish,” Sassa said. “My mom will be gutting, cutting the head off and I’ll gut, and the boys will hang on the poles so we can dry and put them in the smokehouse.”

But sometimes, hunting season overlaps with the fall semester of school. It’s not unusual for dozens of families to go in search of moose around Aug. 20, when school usually begins, and miss a week of class.

“Those aren’t the absences that I worry about,” said Dillingam Middle/High School Principal of three years William Schwan. “It’s the ones [where] there aren’t subsistence things going on and kids are just gone for longer periods of time … those are the ones I worry about.”

“I embrace that cultural diversity and cultural beliefs,” he said. “I think that’s probably one of the reasons I’m the longest tenured principal in over ten years.”

In fact, classes covering the Yup’ik culture are part of the curriculum at Dillingham’s Elementary, Middle and High Schools. Ina Bouker, an Alaska Native who grew up in the nearby village of Manokotak has been teaching in the town’s schools for more than 30 years. She now educates students, including the four Williams kids, on a wide range traditions including the Yup’ik language, dances and songs, and subsistence living. 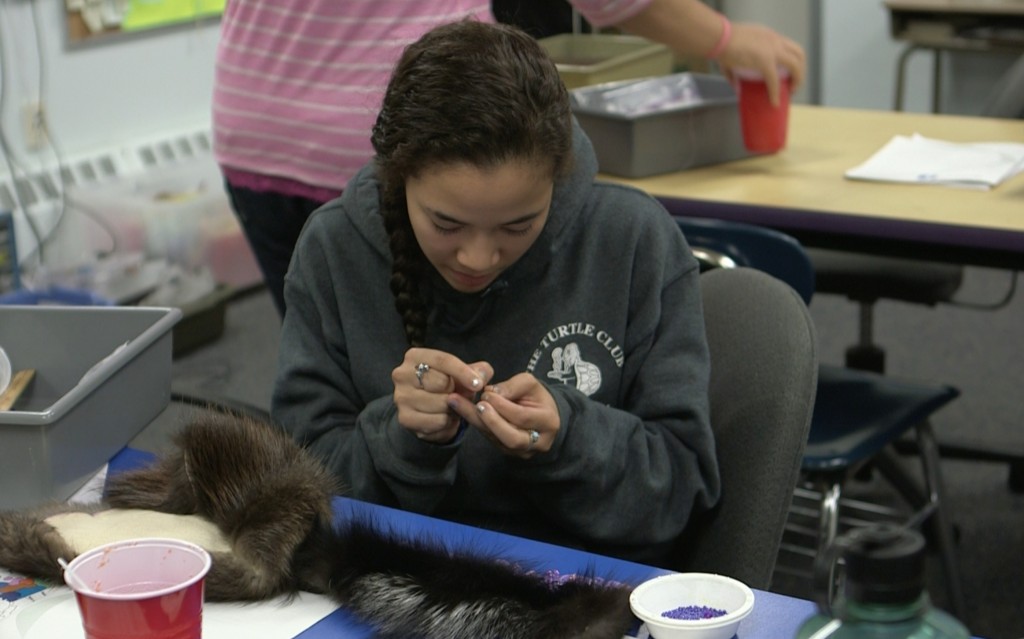 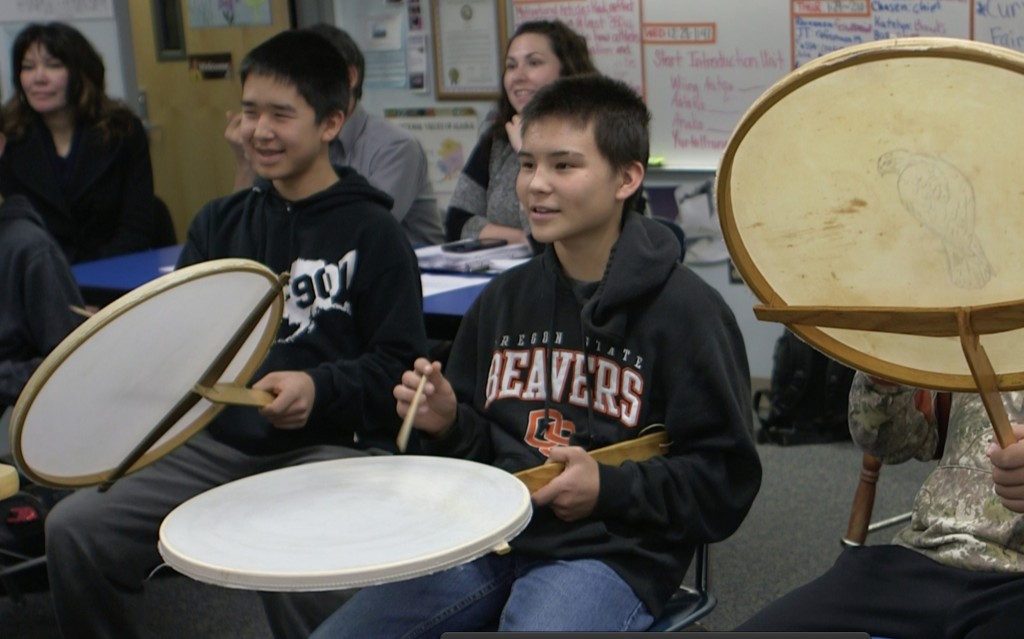 Trevor Akelkok and Jesse Noden are drumming as their class practices a Yup’ik song and dance at Dillingham High School. Photo by Mike Fritz/PBS NewsHour 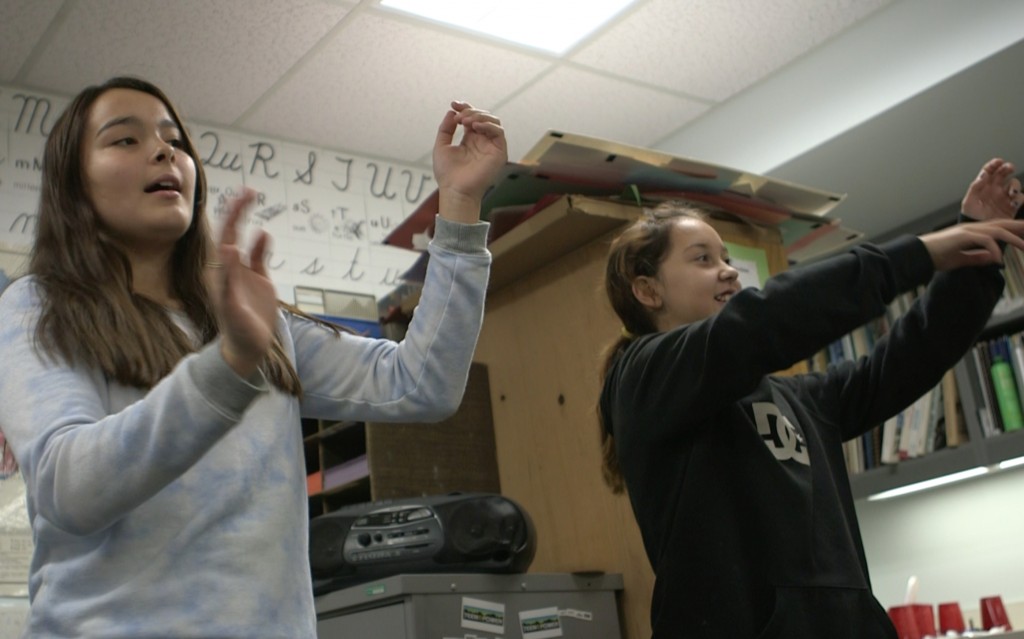 The customs she shares at school are still a regular part of Bouker’s life. On the day we visited her home, Bouker’s son John had placed a freshly caught and skinned rabbit in the refrigerator which she set about cooking up for the evening’s dinner. Bouker chopped it into pieces with an Uluaq, a traditional Yup’ik tool, and put it in a pot with onions, garlic and oil to cook. 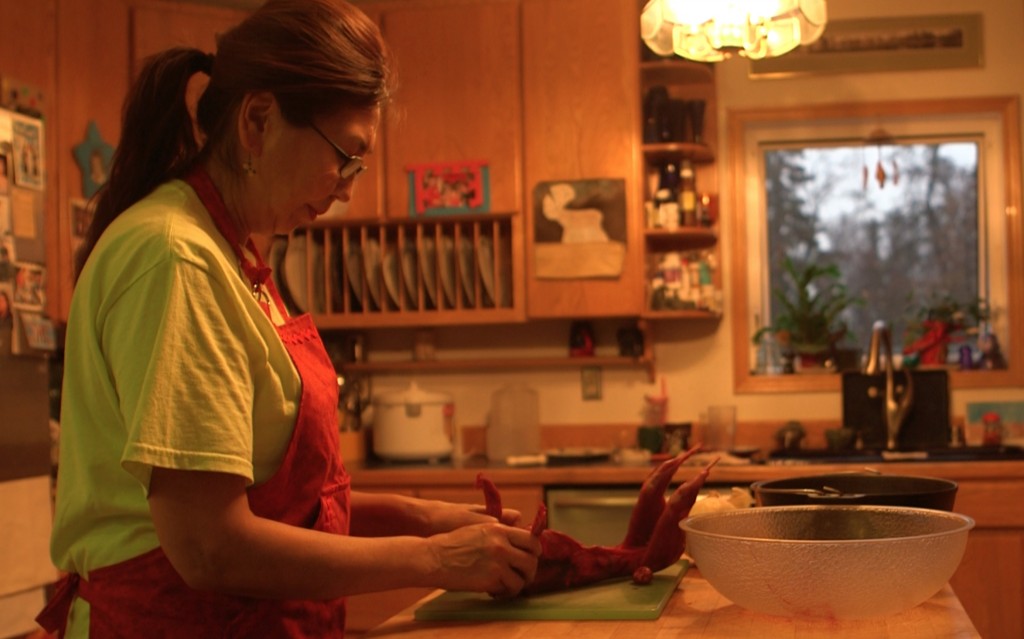 Ina Bouker, who teaches students about Yup’ik traditions including subsistence hunting at schools in Dillingham, Alaska, prepares rabbit freshly caught by her son John for the family’s dinner. Photo by Mike Fritz/PBS NewsHour

“I’m so grateful that I had the opportunity to teach in my homeland,” Bouker said. “I feel super proud that I have taught the language, the dances, the stories, the sewing, the different types of food, the subsistence.”

The fact that Bouker not only keeps up these traditions herself, but passes them on to the community’s children, may well be explained by her own childhood education. Like so many Native Americans and Alaska Natives growing up in the 19th and even 20th centuries, Bouker was taught exclusively by Caucasians, and from her earliest days in school made to shed her Yup’ik identity.

“They forbade us from speaking in Yup’ik and if we did then we had a ruler slapped to our hand like this,” Bouker said, demonstrating with hand gestures. “Not real hard but, you know, enough of a slap to make us scared and remember not to speak Yup’ik.”

“Now that I think of it as an adult I’m thinking, wow, they really managed our lives in school,” Bouker said. “We’d walk in and our teacher would line us up and she would make us show our hands and if our hands were dirty or they were not clean she pointed to the sink and we had to go wash our hands with soap and water.”

“She even would check to see if we brushed our teeth and if we appeared like we hadn’t brushed our teeth then she would point to the teeth-brushing station and we’d go over there and brush our teeth. Even our hair, if our hair was not combed then she’d point us to the mirror. Everybody had their little comb with their name on it in a cup, and we’d take that and we’d have to comb our hair and ponytail it or braid it or whatever, but it couldn’t be flyaway hair. It had to be off of our faces.”

School rules for Sassa Williams and the triplets are dramatically different from those in place when their teacher went to school. But many of the same traditions remain.

When the family returns home after gathering all the smelt, Kim Williams takes some into the kitchen and cooks them up for dinner. Since they caught so many more fish than they could consume, the extra will be shared with others in the Yup’ik community, up the river from Dillingham. 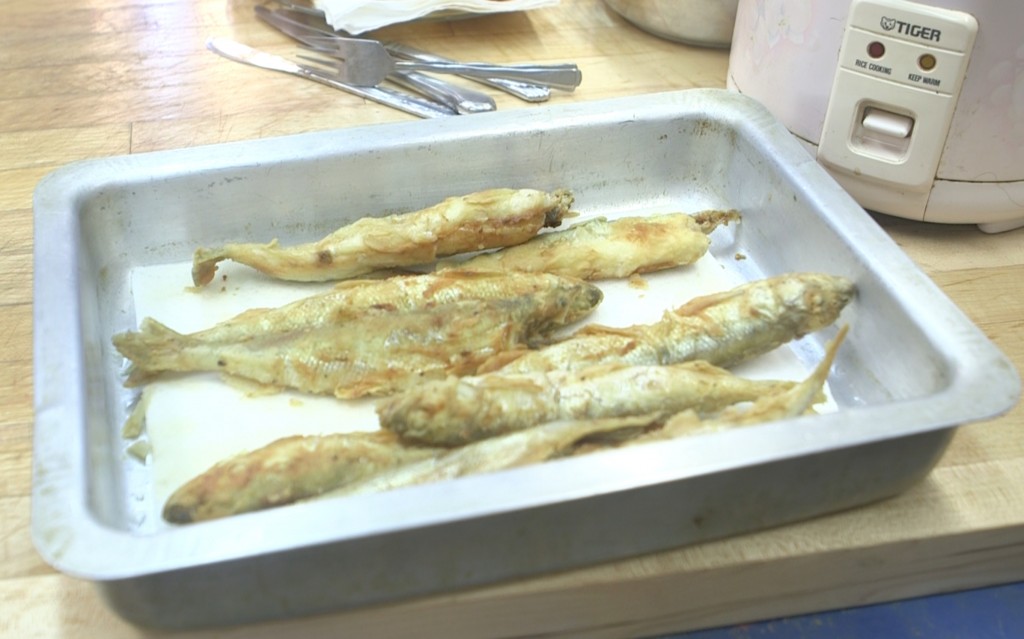 Smelt that has been dipped in flour and fried by Kim Williams, whose family just collected gallons of the fish on Kanakanak Beach near Dillingham, Alaska. Photo by Mike Fritz/PBS NewsHour

“These smelt, they don’t go upriver, up the Nushagak,” said Kim Williams. “So if you get five gallons of smelts … we’ll put them on an airplane and one of the air-taxis will just take them.”

“It’s not just with smelt,” Sassa said. “There is a tradition where … at the beginning of the fishing season, the first person to get the first king [salmon] usually doesn’t keep it for themselves. They actually go and give it to an elder just out of respect. And with luck, that you’re giving that first fish to that elder, you are going to have a really prosperous year and get lots of fish.”

“It’s like that with moose too,” she said. “My Uncle, Will Chaney, he got a couple moose this year and he would give a leg to us, or a rib cage to this person and another leg to that person, and it’s like that with berries and spruce chicken.”

As the Williams family finally sits down to eat the freshly-caught smelt and salmon cakes made with fish harvested earlier this year, it’s clear Sassa plans to share the traditions and rituals passed down from her elders with her own children.

Watch the unusual experience of a teacher in Whittier, Alaska from our colleagues at Alaska Public Media: