Crystal Cheatham was 23 years old when she was told she couldn’t be gay and Christian.

Cheatham, who had grown up attending and singing at a Seventh-day Adventist church, was about to graduate from Andrews University in Berrien Springs, Michigan. Hearing that her identities as a lesbian and a Christian could be in conflict, she said, was heartbreaking.

“When I came out, I was told by ministers so far above me that I couldn’t be an out lesbian and also be on the stage as a leader, and it crushed me. It crushed me so hard,” she said. “I felt like I was at an impasse at the road in my life and I had to decide between this love for my God and my personal identity.”

“A lot of times religious spaces and spiritual resources exclude [LGBTQ people] from the narrative and exclude us in their content, or their content is actively hostile.” — Activist Eliel Cruz

Now an activist and writer, Cheatham has set out to create a digital space for LGBTQ people to explore their own spiritual practice without having to surrender any part of their identity. She is leading the effort to create Our Bible, an app set to release this fall that plans to offer at least 20 Bibles and more than 300 devotional readings, meditation exercises, articles and podcasts for LGBTQ Christians and others who feel marginalized by mainstream Christianity.

Christianity may be the most-practiced religion by lesbian, gay and bisexual people in the U.S. A 2014 Religious Landscape Study by the Pew Research Center surveyed more than 35,000 people who identified as LGB and found that 48 percent of them identified as Christian, with the largest portions of that group identifying as Protestant (29 percent) and Catholic (17 percent). 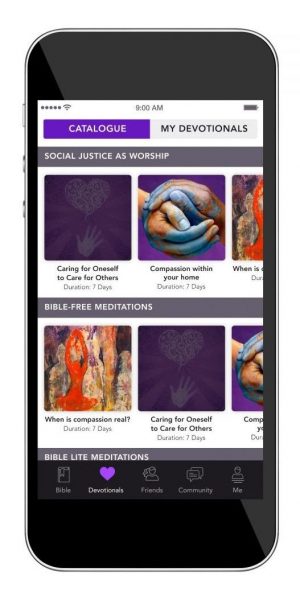 But their identities are often controversial among Christian faith leaders who point to Biblical passages that they say condemn homosexuality — interpretations that are disputed by other members of their community. And while different denominations of Christianity have varying stances, major Christian groups, including the Roman Catholic Church and the Church of Jesus Christ of Latter-day Saints, along with numerous evangelical groups, continue to condemn same-sex marriage and LGBTQ rights.

As a result, LGBTQ people tend to see major religions in the U.S. as “unfriendly” toward their communities. Another Pew Research Center survey of about 1,200 LGBT adults in 2013 found that 79 percent of respondents said the Catholic Church was unfriendly to them, and 73 percent called evangelical churches unfriendly, while 29 percent said they have felt unwelcome in religious institutions.

Meanwhile, the largest-ever survey of transgender people by the National Center for Transgender Equality in 2015 showed that 39 percent of nearly 28,000 respondents who had been part of a religious group had left the community “due to fear of being rejected because they were transgender.” People of color were especially likely to do so.

Cheatham has seen several reasons for that up close. In 2012, she went on tour with Soulforce, a progressive Christian organization that works for racial justice and LGBTQ acceptance within Christian institutions. The group traveled to religious universities whose policies allowed them to discipline or expel LGBTQ students. They would hold Bible study and educate students on LGBTQ identity, encountering frequent resistance from school authorities, some of whom forced them off campus or called the police.

When Christian schools and other institutions exclude LGBTQ people, it leaves LGBTQ Christians with a difficult choice between hiding their identity in religious spaces or giving up the social support of those groups, Cheatham said. And existing devotional apps tend to offer conservative readings and interpretations of the Bible, reflecting a dearth of acceptance for LGBTQ people in Christian institutions.

“A lot of times religious spaces and spiritual resources exclude us from the narrative and exclude us in their content, or their content is actively hostile,” said Eliel Cruz, a bisexual Christian activist, writer and the director of communications for Our Bible.

But research shows that more and more Christians have grown to embrace LGBTQ people. Between 2014 and 2016, the Religious Landscape Study found an increase of 10 percentage points among Christians who believe that LGBTQ people should be accepted. This shift is largely attributable to younger Christians who came of age in a period of growing visibility for LGBTQ people and as political movements for LGBTQ rights garnered greater support.

“There are so many Christians out there that want to be accepting of LGBT people but don’t know how because they haven’t received the resources,” Cheatham said.

Meanwhile, LGBTQ Christians have found community in online forums and conversations, like through #FaithfullyLGBT, a hashtag Cruz created. Our Bible will also have a social component, with users able to add friends who use the app and message them. “We’re using these online spaces for community right now,” Cruz said.

The Our Bible app plans to offer Bible readings and devotional texts for LGBTQ Christians and others who feel marginalized by mainstream Christianity. Logo courtesy of Crystal Cheatham

Rodney McKenzie, a minister who is curating the readings offered on the app, grew up in a Holiness church that hosted testimony service every day, where churchgoers could speak to the rest of the congregation about the role of God in their lives.

“When I stood up at church and came out as gay, I expected people to clap and celebrate, and people did not clap. People did not celebrate. People were horrified,” he said. “This is why this means so much to me. Every Sunday, young LGBTQ people are going to services and they’re hearing messages not of their perfection, not of how good they are, but that there’s something wrong with them. Those messages are antithetical to the Biblical text.”

To counter that messaging, McKenzie has helped find readings for the app that incorporate multiple elements of a daily practice, including devotionals and inspirational readings. He said he wants the readings to connect people “to the love and the truth that is everpresent wherever they are.”

Last year, Cheatham held several fundraisers for Our Bible and raised thousands of dollars through online donations. On June 30, the app will be released in beta to a small number of people, including those who have donated $10 before then, with a wider release planned for September.

Cheatham said she had received a “very small” amount of negative messages about the app. But mostly, “what I’m feeling right now is a pregnant silence, and I’m waiting to figure out the truth of how people are reacting to this,” she said.