WASHINGTON — Washington D.C. Archbishop Wilton Gregory is set to become the first Black U.S. prelate to assume the rank of cardinal in the Catholic Church, a historic appointment that comes months after nationwide demonstrations against racial injustice.

Gregory’s ascension, announced on Sunday by Pope Francis alongside 12 other newly named cardinals, elevates a leader who has drawn praise for his handling of the sexual abuse scandal that has roiled the church. The Washington-area archbishop also has spoken out in recent days about the importance of Catholic leaders working to combat the sin of racial discrimination.

The 72-year-old Gregory, ordained in his native Chicago in 1973, took over leadership of the capital’s archdiocese last year after serving as archbishop of Atlanta since 2005. The ceremony making his elevation official is slated for Nov. 28.

“With a very grateful and humble heart, I thank Pope Francis for this appointment which will allow me to work more closely with him in caring for Christ’s Church,” Gregory said in a statement issued by the archdiocese.

Gregory helped shape the church’s “zero tolerance” response to the sexual abuse scandal while serving as president of the U.S. Conference of Catholic Bishops from 2001 to 2004. During that period, the bishops adopted a charter designed to govern its treatment of sexual abuse allegations made by minor children against priests. The church’s efforts since 2004 have helped achieve a sharp reduction in child-sex abuse cases. But some abuse continues to occur, and the church’s procedures for addressing abuse continue to incur criticism from those who feel there’s a lack of consistency and transparency. 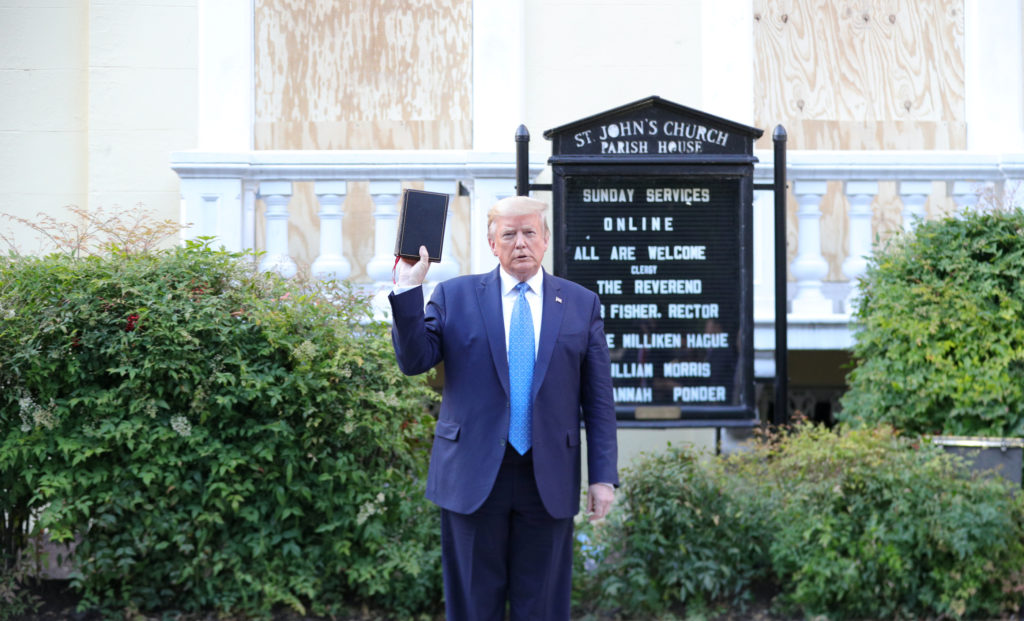 U.S. President Donald Trump holds up a Bible as he stands in front of St. John’s Episcopal Church across from the White House after walking there for a photo opportunity during ongoing protests over racial inequality in the wake of the death of George Floyd while in Minneapolis police custody, at the White House in Washington, U.S., June 1, 2020. Photo by Tom Brenner/ Reuters.

More recently, amid nationwide protests this summer sparked by the police killing of George Floyd in Minneapolis, Gregory made headlines for issuing a statement critical of President Donald Trump’s visit to the Saint John Paul II National Shrine. That presidential visit to the shrine came one day after demonstrators were forcefully cleared to facilitate Trump’s visit to an Episcopal church in Washington, and Gregory responded that he considered “it baffling and reprehensible that any Catholic facility would allow itself to be so egregiously misused and manipulated.”

During a June dialogue hosted by Georgetown University, Gregory talked frankly about his own response to Floyd’s killing and emphasized the value of church involvement in pressing social issues.

“The church lives in society. The church does not live behind the four doors of the structures where we worship,” Gregory said then.

In addition to his work combating racial injustice and sexual abuse in the church, Gregory has drawn notice for his more inclusive treatment of LGBTQ Catholics. In 2014, while serving in Atlanta, he wrote a positive column about his conversations with a group of Catholic parents of LGBTQ children.

Gregory’s elevation, while pathbreaking for Black Americans in the church, also follows a pattern of D.C.-area archbishops getting named to the rank of cardinal. Five of the six prelates who previously held Gregory’s position were later named cardinals.

The archdiocese, though, has become embroiled in the abuse crisis since its previous two leaders — Donald Wuerl and Theodore McCarrick — were implicated in the church sex scandal.

Francis in February 2019 defrocked McCarrick after a Vatican-backed investigation concluded he sexually abused minors and adults over his long career. It was the first time a cardinal had been dismissed from the priesthood for abuse.

Francis reluctantly accepted Wuerl’s resignation in October 2018 after he lost the trust of his priests and parishioners in the months following the release of the Pennsylvania grand jury report. The report accused Wuerl of helping to protect some child-molesting priests while he was bishop of Pittsburgh from 1988 to 2006.