SAN FRANCISCO (AP) — A Northern California blaze forced evacuation orders and warnings for nearly all of Sonoma County stretching to the coast, with forecasts of strong winds prompting officials to begin cutting electricity for millions of people in an effort to prevent more fires.

Pacific Gas & Electric started shutting off power Saturday around 5 p.m. for an estimated 2.35 million people across 38 counties. About 90,000 residents were ordered to evacuate towns near the 40-square-mile (104-square-kilometer) fire.

Saturday night’s evacuation order encompassed a huge swath of wine country stretching from the inland community of Healdsburg west through the Russian River Valley and to Bodega Bay on the coast, Sonoma County Sheriff Mark Essick said. An even broader area was put under a warning for residents to get ready to leave at a moment’s notice.

Some weekend gusts might reach 75 mph (120 kph) or higher in a “historic” wind event, the National Weather Service said. Winds could lead to “erratic fire behavior” and send embers for miles, warned the California Department of Forestry and Fire Protection. 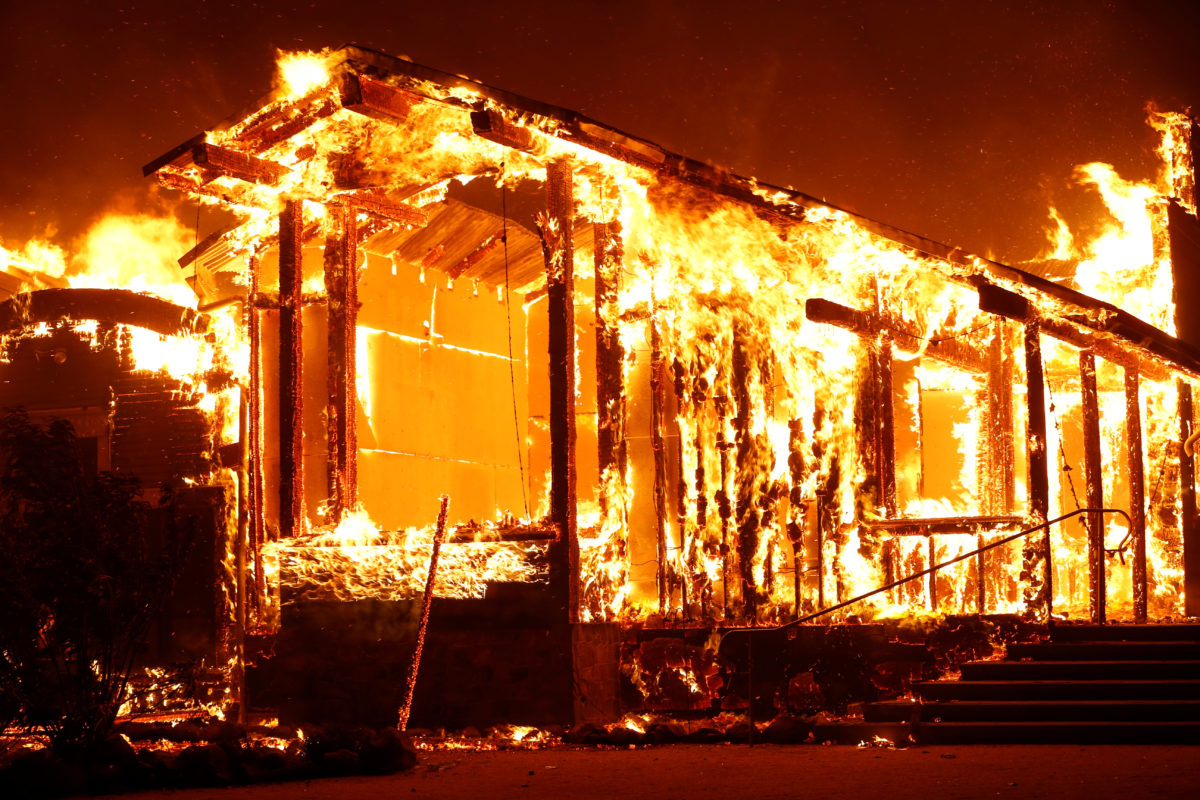 PG&E said the new wave of blackouts was affecting about 940,000 homes and businesses in 36 counties for 48 hours or longer. The city of San Francisco was not in line for a blackout amid shut-offs for most of the rest of the San Francisco Bay Area, the wine country to the north and the Sierra foothills.

The sheriff pleaded with residents in the evacuation zone to get out immediately, citing the 24 lives lost when a wildfire swept through the region two years ago.

The wind event expected to peak early Sunday would likely be the strongest in several years, said PG&E meteorologist Scott Strenfel. He said Saturday that falling trees and breaking branches were likely. Relative humidity will dip into single digits, he said.

A wildfire Thursday destroyed 18 structures in the Santa Clarita area north of Los Angeles. Nearly all the 50,000 residents ordered to evacuate were allowed back home after Santa Ana winds began to ease. 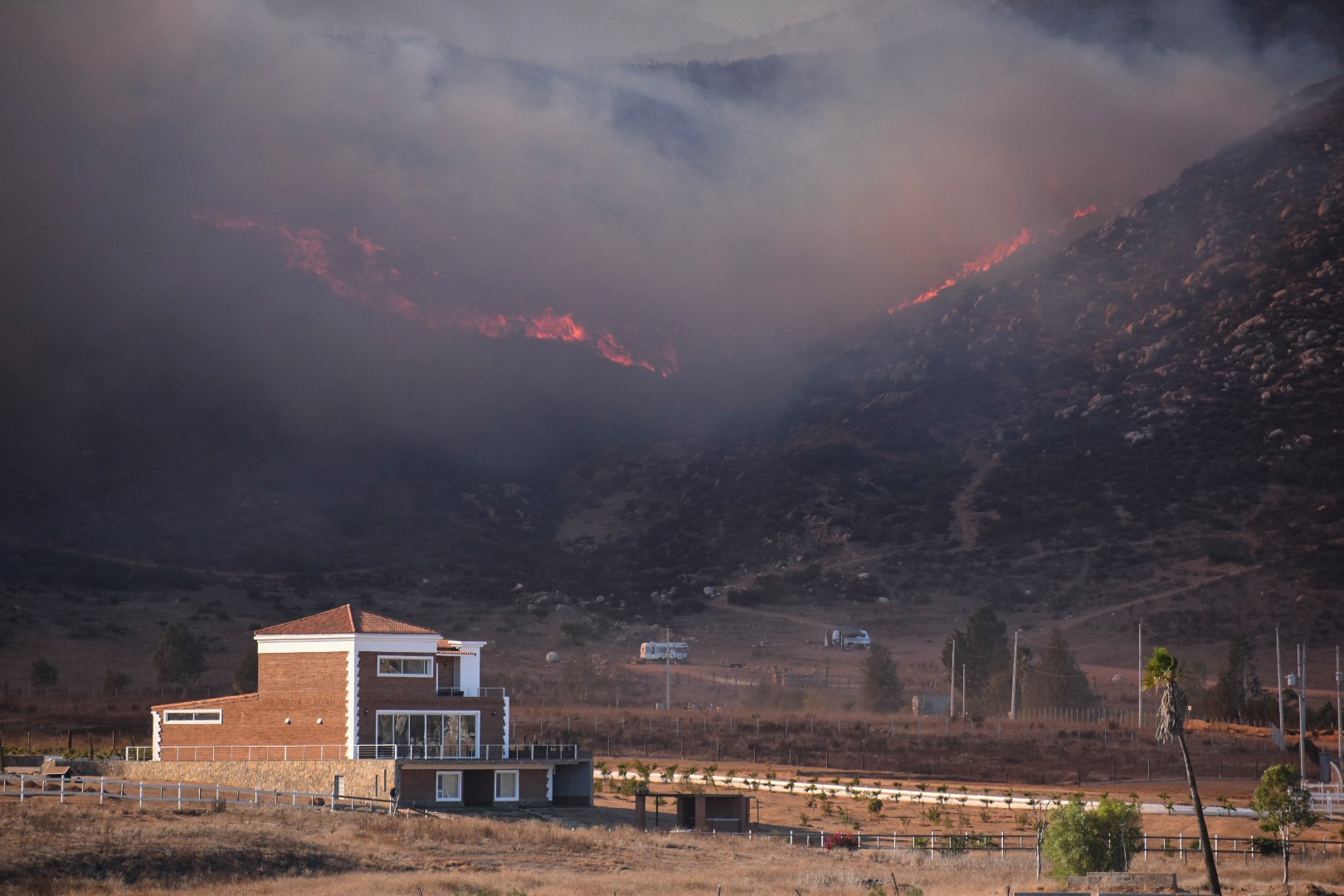 A fire burns in Valle de Guadalupe, Baja California, Mexico October 25, 2019 in this picture obtained from social media on October 26, 2019. Photo by Instagram @dnlrlln via Reuters.

“I’m thankful that nothing happened to my house, but I feel bad for my neighbors,” Briano, 71, said Saturday.

Sheriff’s officials said human remains were found within the wide burn area, but it’s unclear if the death is connected to the blaze. The Tick fire was 55% contained.

To the north, firefighters raced to make progress against the blaze near Geyserville in Sonoma County before ferocious “diablo winds” returned. The blaze, called the Kincade fire, had burned 77 buildings, including 31 homes, and swept through more than 40 square miles (104 square kilometers) of the wine-growing region by Saturday evening. It was roughly 10% contained.

A firefighter shielded two people from flames with his fire shelter and all three were hospitalized with non-life-threatening injuries, Cal Fire said.

Several thousand people in neighboring Lake County were warned to be ready to evacuate if an order is given. A 2015 wildfire in the area killed four people and burned nearly 2,000 buildings.

What sparked the current fires is unknown, but PG&E said a 230,000-volt transmission line near Geyserville malfunctioned minutes before that blaze erupted Wednesday night.

Weekend forecasts detail what could be the strongest winds of the year coupled with bone-dry humidity. Many facing power shut-offs were far from fires. PG&E cast blackouts as public safety efforts to prevent the kind of blazes that killed scores of people over the past couple of years, destroyed thousands of homes, and ran up tens of billions of dollars in claims that drove the company into bankruptcy.

“Any spark, from any source, can lead to catastrophic results,” Vesey said. “We do not want to become one of those sources.”

The possible link between the wine country fire and a PG&E transmission line contained grim parallels to last year when most of the town of Paradise burned, killing 85 people in the deadliest U.S. blaze in a century.

Many residents facing blackouts had barely recovered from a previous shut-off.

Jon Robinson, 52, of Rough and Ready, said the earlier shut-off put him in the hospital for several days for the stomach flu. He’d been tending to his sick grandson and got worn down between that and taking care of animals on his ranch.

Robinson was unsure if his family, who moved to California seven years ago, will remain in the state.

“Before this, we planned on staying,” he said. “But I’ll tell you what, it’s just too nerve-racking.”

About 30 miles (48 kilometers) northeast of Sacramento, 65-year-old Sukhwinder Singh said he worked the Quality Market convenience store cash register in the dark, but nobody wanted warm soda and melted ice cream. He estimates he lost about $1,100 in sales and products. Singh has a generator now, but said he can’t keep it running all night when the store is closed.

“I don’t know how we can pay the bills at the end of the month,” he said.

Also northeast of Sacramento, Scott Paris estimates about $20,000 lost in shutting down his High-Hand Nursery and Cafe when PG&E cut the power earlier this month for about 24 hours during a weekday. A beautiful fall Sunday might bring $50,000 to $60,000 worth of business.

“We’re scrambling to get enough generators,” he said. “If this is the new normal, it’s going to drive up a lot of costs. It drives up stress.”

In Marin County, just north of San Francisco, the sheriff’s office warned if blackouts knock out traffic lights, treat those intersections as a four-way stop.

Even before the new blackout order, the University of California, Berkeley announced it was canceling all Saturday afternoon classes, as well as other indoor events and activities scheduled through Sunday.

A Florida utility, Florida Power & Light, announced it was sending 100 line workers and support staff to help PG&E restore power to areas with outages caused by the wildfires.

Left: Firefighters remove a flag off a barn, as the wind driven Kincade fire burns near the town of Healdsburg, California, U.S., October 27, 2019. Photo by Stephen Lam/Reuters.