After Charlottesville rally, these U.S. cities say they’ll take down their Confederate statues

Cities and states across the country have called for the removal of Confederate monuments from public spaces after a white nationalist rally aiming to protect such a monument in Charlottesville, Virginia, led to a deadly car attack.

The Southern Poverty Law Center tallied more than 700 Confederate statues and monuments across the country in a report last year. Three states alone — North Carolina, Virginia and Georgia — account for about 300 of those.

The conversation about Confederate symbols last swelled in 2015, after a racially-motivated shooting left nine black worshipers dead at a church in Charleston, South Carolina. The gunman, Dylann Roof, said he wanted to start a “race war.” Since then, SPLC has counted at least 60 of these “publicly funded symbols of the Confederacy have been removed or renamed.”

Saturday’s violence revived calls to take down monuments to Confederate-era battles and leaders. Here are the cities and states that have signaled their intentions to remove or relocate them. 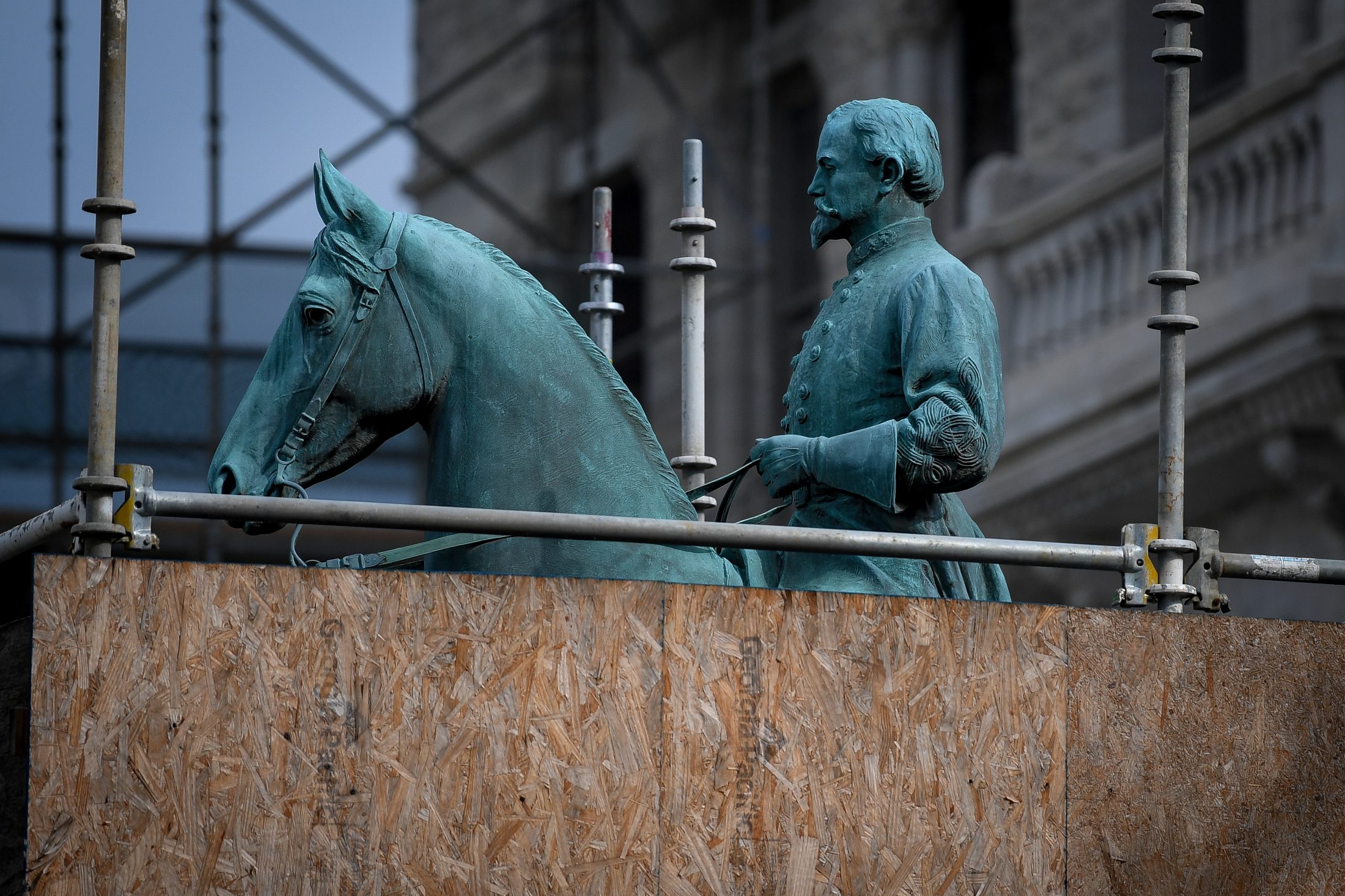 A monument to Confederate General John Hunt Morgan stands encased in a protective scaffolding because of local construction, outside the Historic Lexington Courthouse in Lexington, Kentucky. Photo by Bryan Woolston/Reuters

Lexington Mayor Jim Gray said in a Facebook post on the day of the Charlottesville, Virginia, attack that he wanted to move two Confederate states from the grounds of an historic courthouse.

“Mayors are on the razor’s edge,” Gray told CBS News. “When you see the tension, when you see the violence that we saw … in Charlottesville, then you know that we must act.”

City Council President Anna Lopez Brosche said the Confederate monuments in the city should be moved.

“In response to the horrific and unacceptable incidents that occurred in Charlottesville, Virginia, I am asking that the city … conduct an inventory of all Confederate monuments, memorials, and markers on public property,” she said in a statement, according to the Associated Press.

Brosche’s statement came on the same day a Confederate statue in Gainesville, Florida, was relocated from downtown to a cemetery farther outside the city center. The removal of the statue was debated for months, “but in the end no protesters showed up,” The Gainesville Sun reported.

Protesters didn’t wait for officials to jump-start an official process for removing a Confederate statue. Using a rope, a group of protesters took down a statue Monday in front of a courthouse building. The incident was caught on video and circulated on social media.

North Carolina Gov. Roy Cooper, shortly after the incident, posted on Twitter: “The racism and deadly violence in Charlottesville is unacceptable but there is a better way to remove these monuments.”

Authorities are now seeking charges against the protesters involved in the toppling of the statue.

Officials announced that they plan on suing the state of Tennessee to remove the two Confederate monuments from city land. The Tennessee Historical Commission, which has previously resisted calls to remove monuments, requires local jursidictions to apply for a waiver in order to move them.

City Attorney Bruce McMullen told the Commercial Appeal that the city will file a waiver for one of the monuments within 30 days, but expects the commission to reject it.

The city filed a waiver to remove the second statue — of slave trader and one-time KKK member Confederate Gen. Nathan Bedford Forrest — in 2016. The commission rejected it, but before the new rules requiring waivers took effect. This gives the city another chance at a waiver, McMullen told the Commercial Appeal, but he expects the commission to reject it again.

From there, the city could follow through with an appeals process that would go to the state’s Supreme Court. That could take years.

Crews in Baltimore removed four Confederate statues overnight, a process that began Tuesday, after the City Council voted unanimously to relocate the monuments.

Mayor Catherine Pugh defended her decision to move the statues “quickly and quietly” in a news conference Wednesday.

“I thought that there was enough grandstanding, enough speeches being made. Get it done,” the mayor told reporters, adding that she told the City Council that the current climate of nation helped expedite the removal decision.

“I did what was right for my city,” Pugh said.

The mayor previously pledged on Monday to remove the monuments in the city, suggesting one option would be to redirect them to Confederate cemeteries, the Baltimore Sun reported.

On Wednesday, the mayor said it’s up to a city committee to decide where the monuments will ultimately reside.

The statue of former U.S. Supreme Court Justice Roger B. Taney sits outside the Statehouse in Annapolis. Taney is best known for a 1857 decision against Dred Scott, which ruled that blacks could not become U.S. citizens.

“It’s the appropriate time to remove it,” he said, adding that not moving the statue “would send a message that we condone what took place, that slavery is [all right].”

Some congressional Democratic leaders have called for the removal of 10 Confederate statues around the nation’s capital. Rep. Bennie Thompson, D-Miss., said these symbols have “no place in this country.” House Minority Leader Nancy Pelosi also called for their removal Thursday and asked House Speaker Paul Ryan, R-Wisc., to join her. A spokesman for Ryan told the Associated Press the decision about statue removal was up to the states.

Left: A woman who supports Confederate symbols and monuments is held by her husband (R) as she exchanges words with a counter-protester as they wait for members of the Ku Klux Klan to rally in support of Confederate monuments, such as the statue of General Stonewall Jackson behind them, in Charlottesville, Virginia, on July 8, 2017. Photo by Jonathan Ernst/Reuters