Chicago strike means day off for some, emergency for others

CHICAGO — Chicago parents leaned on family, friends and community groups as 25,000 teachers in the nation’s third-largest school district went on strike this past week , canceling classes for more than 300,000 kids.

For some families, the Chicago Teachers Union walkout meant a day off and a bit of inconvenience for parents juggling work schedules. For the city’s most vulnerable families, though, the strike triggered a hasty search for a solution to help kids and let their parents make it to work.

Classes were canceled Thursday and Friday, and it’s not clear when the first major walkout since 2012 by the city’s teachers will end. The two sides were meeting Saturday.

The uncertainty of her five kids being out of school has weighed on Antenisha Dale. When she walked into a Salvation Army community center on the city’s West Side Friday morning, Dale’s eyes widened when she learned they could all stay for the day, for no charge. 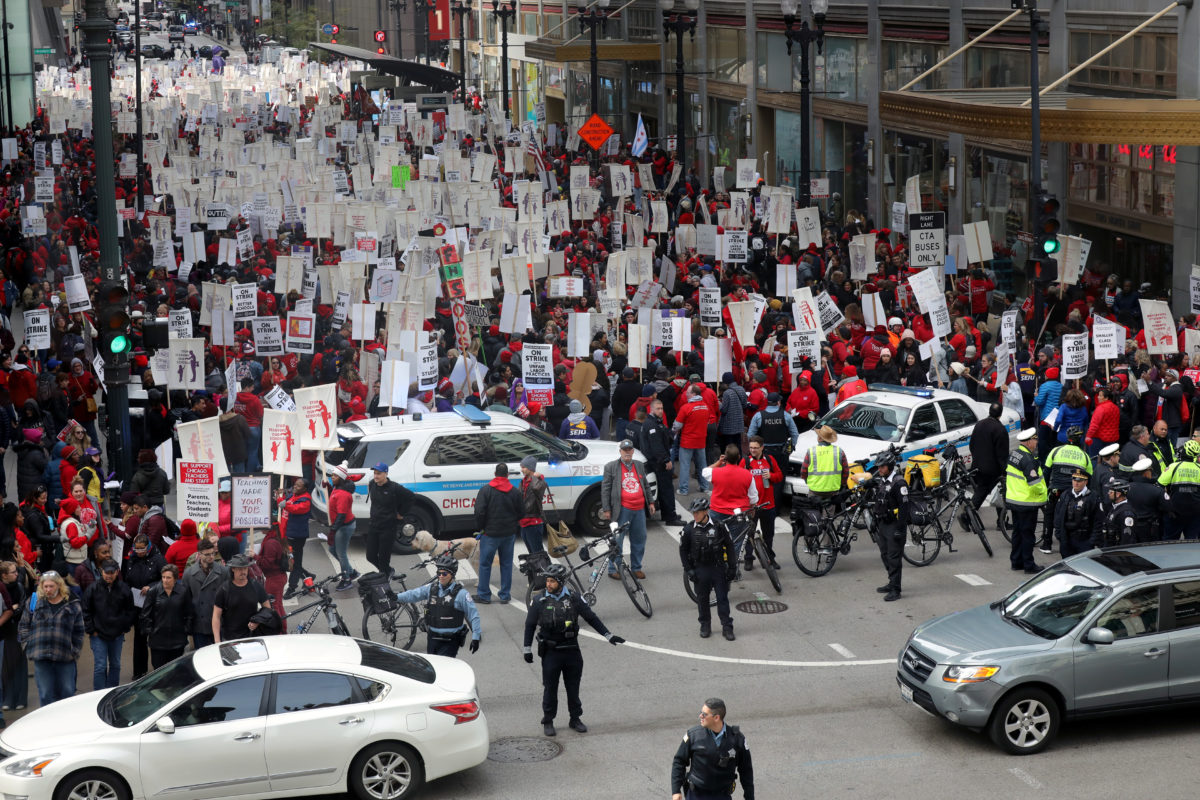 Teachers protest during a rally on the first day of a teacher strike in Chicago, Illinois, U.S., October 17, 2019. Photo by John Gress/Reuters

The 29-year-old took off from her job at a grocery store deli counter on Thursday, forgoing a day’s pay when every dollar is essential for her family. Finding an affordable place for her kids to go if a strike drags on “takes a weight off my shoulders,” Dale said.

Striking teachers argue that students and families in similar situations are the motivation behind their “social justice” agenda, not their own pay or benefits. They’re demanding smaller class sizes and more resources for schools, including nurses and social workers, written into the contract along with ways to enforce those changes.

“What we really want is an improvement in our working conditions, which are the learning conditions for our students,” CTU President Jesse Sharkey said Friday.

City and district officials, though, have called their offer of a 16% salary increase over five years for teachers “historic.” Meeting all of teachers’ demands including a 5% salary increase for three years would cost more than $2.5 billion each year, an amount the district cannot afford, Mayor Lori Lightfoot has said.

“CPS is not flush with cash,” Lightfoot said Friday, noting the district’s reliance on loans in its latest budget plan.

But the schools staffed by makeshift crews didn’t seem popular with parents. The district reported about 7,500 students showed up on the strike’s first day.

On the city’s North Side on Friday, a few parents opted to bring their kids to a neighborhood YMCA rather than nearby schools.

Samantha Gutierrez said her daughter preferred the YMCA where she goes regularly in contrast to the school now staffed by people she doesn’t know well.

“I didn’t feel comfortable sending her to a building full of strangers,” said Gutierrez, 25, an orthodontist assistant. “And I think she would feel a little intimidated there. She said she wanted to go to the Y where she knows kids.”

Ira Cox worked out at the YMCA Friday morning before heading home to spend the day with his 7-year-old girl and 9-year-old boy. Cox said he sent his children to their school on Thursday while he worked but said it felt like “crossing a picket line.”

He arranged to work from home on Friday.

“I know I have options some people don’t have and I am not criticizing anybody,” Cox said. “But I can do this, so I am doing it in solidarity with the striking teachers.”

Parents whose jobs have inflexible scheduling and keep them on tight budgets that won’t cover admission prices for a variety of “strike camps” planned around the city were forced to find alternate plans. While some relied on family members, others turned to the city’s churches and nonprofit groups for help.

Courtney Holmon, senior program director at The Ark of St. Sabina, said she thinks parents took kids to work or stayed home during the first few days of the strike. But if it continues, expects more families on the South Side to need The Ark’s free program.

“We have people that are bringing four kids in one family,” Holmon said. “They can’t afford four times $65.”

Jalisa McKissick brought her 9-year-old daughter and 5-year-old son to a Salvation Army center on Friday morning before heading to work at a downtown department store. McKissick said she took Thursday off but couldn’t afford to give up another day of pay as a single mom.

McKissick, 27, said she’s frustrated by teachers’ decision to strike just as her kids were settling into their classes and worries that they will have little time to get back on track before classes let out again for holidays.

“These children should not be going through this,” she said. “I think they’re being inconsiderate and insensitive.”